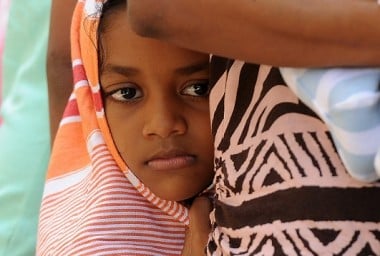 “VICTORY AT SEA”, the headline on the front page of The Daily Telegraph reads today.

He’s perched atop a cliff while overcrowded boats languish on the endless seas behind him, and the headline next to him boasts: “Exclusive: How the war on boats was won… 1673 asylum seekers sent back to where they came from”.

This front page is colourful. It’s emotive. It’s a feat of Photoshopping, even.

But there’s one very problem with it: the ‘victory’ the headline describes is not a victory at all.

It is a national shame.

As the Asylum Seeker Resource Centre’s campaign coordinator Pamela Curr told Mamamia today, the Federal Government’s asylum seeker policy is not a victory at sea but “a dirty business at sea”.

“It’s not a pretty record. Australians cannot be proud of this,” she said today.

“The so-called victory is a time to check for collateral damage, and the collateral damage is: we’ve had a murder in (an immigation detention) camp, we’ve had a young man die of a minor infection,” she said, referring to the deaths of young Iranian asylum seekers Reza Barati and Hamid Khazayi. “(W)e’ve had women on Nauru have abortions rather than have their babies on Nauru; the conditions were so appalling they could not imagine having babies in those hot tents.”

Ms Curr said it was also legally problematic that the government was predicating it’s ‘victory’ on sending asylum seekers back.

“The only element of the Refugees Convention which Australia has in its domestic law is this rule against refoulement, or sending people back to persecution,” she said.

“When people are on boats turning people around at sea, there’s been no proper process to find out if they’re sending people back to be persecuted or to be killed,” she said. “We’re taking chances with people’s lives when we don’t properly assess their claims.”

The ASRC today published a statement highlighting that more than 90 per cent of asylum seekers whose cases are reviewed will have genuine claims for permanent protection.

“Like all Australians, we are relieved that it has been many months since there has been a death at sea. But that’s where the good news ends,” the statement said.

“What the government is celebrating today is our decision to slam the door in their face, kick them back down the street – or lock them away,” it said.

“We are talking about people who were woken in the night by a bomb ripping through their house and killing half their family or whose loved one suddenly ‘disappeared’ because they spoke out against the government or whose sexual orientation made them a target for violence,” it said.

“We should be celebrating their courage and resilience in the face of such horror, not kicking them to the curb,” it said.

“As a long-term strategy, Morrison’s ‘turn back the boats’ policy is a moral, economic and policy failure.”

Ms Curr added the secrecy imposed by the official media blackout on Operation Sovereign Borders was also not worth celebrating.

“I really value living in a democracy that is open and transparent,” she said.

“When we have secret detention centres and secret military operations at sea, that really distresses me,” she said. “It’s not my idea of a democratic, fair and open Australia.”

Victory for control - Australians as a whole are largely uneducated about refugees. Everyone has an opinion largely based on the controlled news from media. I'm concerned about all the secrecy....... media & comments do not = fact

What I find the most interesting is often the most ignorant and sweeping statements are made from 'Anons' & 'guests'. I know quite a bit about human trafficking however why don't we find and punish them? Anon & Guest??

Correct Angel, the neo cons in govt wish to keep suburbia focused on refugees and people smugglers. They fan the average Australians racism and link this with fear about jobs , debt and the economy. Almost all of this emanates from commercial tabloid press, radio and tv which are the way most punters get their information. Pathetically simple really.