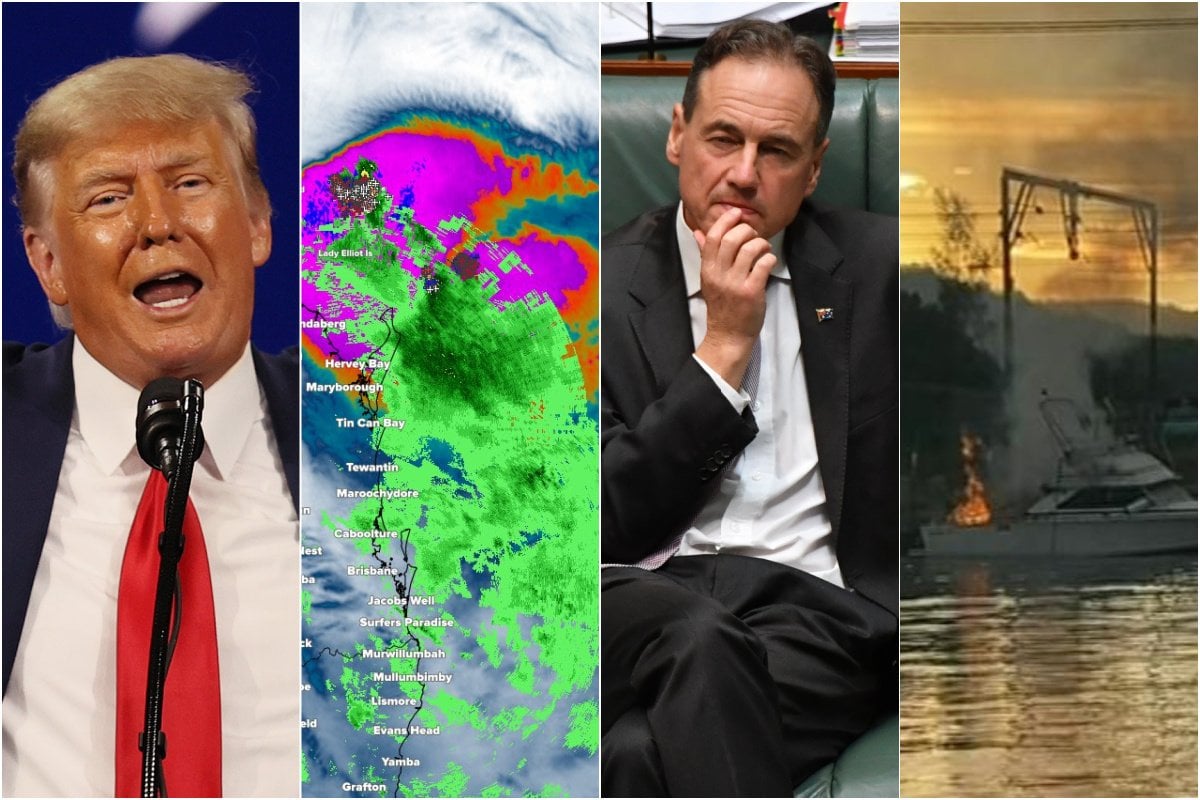 An explosive New York Times investigation combed through Federal Election Commission filings from both the Trump and Biden campaigns, along with their related entities, such as the two major political parties’ national committees.

It also interviewed Trump donors, campaign officials, bank officials and finance experts - and uncovered a "pattern" where Trump supporters would give money intending it to be a single donation, only to discover weeks later their accounts were handing out money over and over again.

Exclusive: An investigation by The New York Times found that Trump supporters who thought they were donating just once were charged over and over by his campaign. Late last year, $64 million was refunded in contributions. https://t.co/EQiZrorO4v

Banks and credit card companies dealt with a flood of complaints and fraud claims and Trump's camp was forced to issue refunds, but as the report reveals, the cash had already served its purpose.

"The recurring donations swelled Mr Trump’s treasury in September and October, just as his finances were deteriorating. He was then able to use tens of millions of dollars he raised after the election, under the guise of fighting his unfounded fraud claims, to help cover the refunds he owed," said The Times.

“In effect, the money that Mr Trump eventually had to refund amounted to an interest-free loan from unwitting supporters at the most important juncture of the 2020 race.”

Queensland is bracing for more extreme rain and flooding from above Bundaberg to the Sunshine Coast.

The Bureau of Meteorology issued a severe weather warning for damaging winds, heavy rainfall and dangerous surf for a large swathe of southeast Queensland late on Sunday afternoon.

The warning area stretches along the coast from Seventeen Seventy to North Stradbroke Island near Brisbane.

Rain is developing across southeast Qld this morning, and forecast to become heavy at times later today and overnight in the yellow area.

The bureau expects heavy rainfall and flash flooding to develop in the state's southeast on Sunday evening and into Monday as a low weather front tracks south to southeast from Hervey Bay.

"Six-hourly rainfall totals between 120 to 160 millimetres are likely in areas," the alert said.

The deluge could be even more dramatic for communities east of Bundaberg, Maryborough and Noosa Heads where isolated six-hourly rainfall totals could reach up to 250mm.

Several flood watch warnings have been activated, less than a fortnight after the state suffered loss of life and property damage in a widespread rain event.

Labor is demanding the Morrison government provide a new set of target dates for the vaccine rollout, saying it has made a mess of the timetable so far.

But Health Minister Greg Hunt insists as the domestic supply of the AstraZeneca vaccine from CSL ramps up, so will the vaccine program, although, perhaps wisely, he is vague on the precise timetable.

The daily rate of vaccinations is increasing with over 79,000 completed on Thursday, compared with 55,000 on Monday last week.

But that brought the total number of Australians vaccinated to just 841,855, well short of the four million by the end of March once promised by Prime Minister Scott Morrison.

After major delays in its vaccine rollout, the Federal Government hopes to accelerate its program from today, as it doubles the capacity to immunise Australians. #9Today pic.twitter.com/sT6qlxU5U6

"The Morrison Government is making a mess of this vaccine rollout and Australians expect and deserve clearer answers on when they are going to get the vaccine," Labor's health spokesman Mark Butler told reporters in Adelaide on Sunday.

He said just 14 per cent of those in aged care have received their two doses of the vaccine, when that program was also supposed to be finished last week.

"Australians want to know when their loved ones who might be in aged care facilities are going to get vaccinated because they know they are the most vulnerable people in our community," Mr Butler said.

Queensland has recorded a single new COVID-19 infection in hotel quarantine as it investigates limiting the number of hospitals treating positive cases to prevent virus spread.

Two clusters that triggered a lockdown of more than two million people have been independently linked to Brisbane's Princess Alexandra Hospital staff and patients have been moved from its infectious disease ward.

Health Minister Yvette D'Ath said the outbreaks were not linked to breaches in infection control by individual staff.

Queensland could overhaul the way it manages COVID patients in a desperate bid to prevent future outbreaks. #COVID19qld | @ClareBarnes_10 pic.twitter.com/siuM6ywR7L

Instead of having COVID-positive cases in different hospitals around the city, Ms D'Ath is looking at a single, dedicated area, potentially at The Royal Brisbane and Women's Hospital.

"We believe that will reduce the risk and help with our resources as far as our health workers and making sure that it's only health workers who are vaccinated also working with the staff," Ms D'Ath said.

Premier Andrews on the mend after fall.

Victorian Premier Daniel Andrews says he's making steady progress in his recovery from a serious back injury and is now walking about 18 minutes a day.

Mr Andrews suffered broken ribs and a fractured T7 vertebra after slipping on wet stairs at a holiday home on the Mornington Peninsula on March 9.

The 48-year-old, who is recovering at home, says the past few weeks have been a "pretty painful" time but he is on the mend.

Thanks for all your messages of support over the past couple of weeks. They’ve really helped to keep my spirits up in what’s been a pretty painful time. pic.twitter.com/XitUCj2xV3

"I'm making steady progress and being diligent with my physio exercises," he said on social media.

"Also building up my walking and am up to about 18 minutes on my daily walk."

The premier, who narrowly avoided permanent damage to his spinal cord, thanked the community for their well wishes since his injury.

"They've really helped me to keep my spirits up in what's been a pretty painful time."

A boat has exploded on the Hawkesbury River north of Sydney, leaving four people fighting for life with critical burns.

Eight people suffered burns and smoke inhalation in the explosion at Brooklyn near Danger Island on Sunday afternoon.

NSW Ambulance confirmed four of those on board were critically injured in the Easter Sunday incident that drew at least a dozen emergency crews.

Two people are fighting for life after a boat explosion on the Hawkesbury River Marina at Brooklyn. Six others were hurt with specialist medical teams flown in to help. https://t.co/ntfZq5bKFU #7NEWS pic.twitter.com/9Nga4sYxqw

They were taken to Royal North Shore Hospital under police escort.

Another two patients were transferred to Westmead Hospital in a serious condition, while the remaining two others were treated at the scene.

"NSW Ambulance along with other emergency services established a triage area to assess all of our patients," NSW Ambulance inspector David Morris said in a statement on Sunday evening.

Fire and Rescue NSW said firefighters were tasked with driving ambulances to allow paramedics to treat patients in transit because of the seriousness of their injuries.

The family of Australian fashion icon Carla Zampatti has accepted the NSW Government's offer of a state funeral, after her death days after a fall at an outdoor opera performance.

In a statement on Sunday, NSW Premier Gladys Berejiklian described the designer as 'talented, generous and inspiring. A true trailblazer in every respect'.

"On behalf of the people of NSW, I extend my deepest condolences to the family, friends and colleagues of Carla." the statement said.

Details of the State Funeral will be provided in the coming days.

Opera Australia has launched a safety review after fashion designer Carla Zampatti tragically died after falling down stairs at a Sydney show. pic.twitter.com/f7OcmekngT

Born in Italy in 1942, Zampatti migrated to Australia in 1950 at age nine, setting up her fashion famous label at 24. Her designs have been worn by some of Australia's most influential women, including Princess Mary of Denmark, Australia's first female prime minister Julia Gillard, Oscar-winning actress Nicole Kidman and Gladys Berejiklian.

The information appears to be several years old, but it is another example of the vast amount of information collected by Facebook and other social media sites, and the limits to how secure that information is.

The availability of the data set was first reported by Business Insider. According to that publication, it has information from 106 countries including phone numbers, Facebook IDs, full names, locations, birthdates, and email addresses.

Facebook has been grappling with data security issues for years. In 2018, the social media giant disabled a feature that allowed users to search for one another via phone number following revelations that the political firm Cambridge Analytica had accessed information on up to 87 million Facebook users without their knowledge or consent.

Dubai police have arrested a group of people on charges of public debauchery, authorities say, over a widely shared video that shows naked women posing on a balcony in the city.

Violations of the public decency law in the United Arab Emirates, including for nudity and other "lewd behaviour", carry penalties of up to six months in prison and a 5000 dirham ($A1800) fine.

The sharing of pornographic material is also punishable with prison time and hefty fines under the country's laws, which are based on Islamic law, or Sharia.

Police in Dubai have arrested a group of people on charges of debauchery after footage of naked women posing on a balcony was shared online https://t.co/hpeaHJJQpa

Late on Saturday, videos and photographs depicting over a dozen naked women, lined up on a balcony while being filmed in Dubai's upscale Marina neighbourhood in broad daylight, splashed across social media.

It came as a shock in the federation of seven Arab sheikhdoms, where tamer behaviour, such as kissing in public or drinking alcohol without a licence, has landed people in jail.

- The Brazilian coronavirus variant P1 has left the country's hospitals and gravesites overwhelmed. It's considered more infectious than regular COVID-19 and attacks people in their 30s, 40s and 50s.

- Four women and a girl have been arrested in southern France as part of an anti-terrorist investigation into a suspected attack plot targeting the city of Montpellier.

- Cate Blanchett and Nicole Kidman are nominated for a Screen Actors Guild Award on Monday.

- Hip Hop icon DMX’s is fighting for life after a reported drug overdose and heart attack.

james b a month ago

Reply
Upvote
1 upvotes
Nice to see some Trump news. How about Hunter Biden? His latest revelations would be news fodder for weeks, had it been one of the Trump boys, but yeah, nah, crickets.

Reply
Upvote
1 upvotes
@james b I suppose the big difference is that Hunter Biden isn't positioning himself as one of his fathers advisors, and doesn't appear to be heading for a political career himself.

james b a month ago

Reply
Upvote
1 upvotes
@rush I suppose you're right, that doesn't explain the attacks against Barron Trump or the First Lady.

Reply
Upvote
1 upvotes
@james b You win the "Whataboutism" award for the day, James.