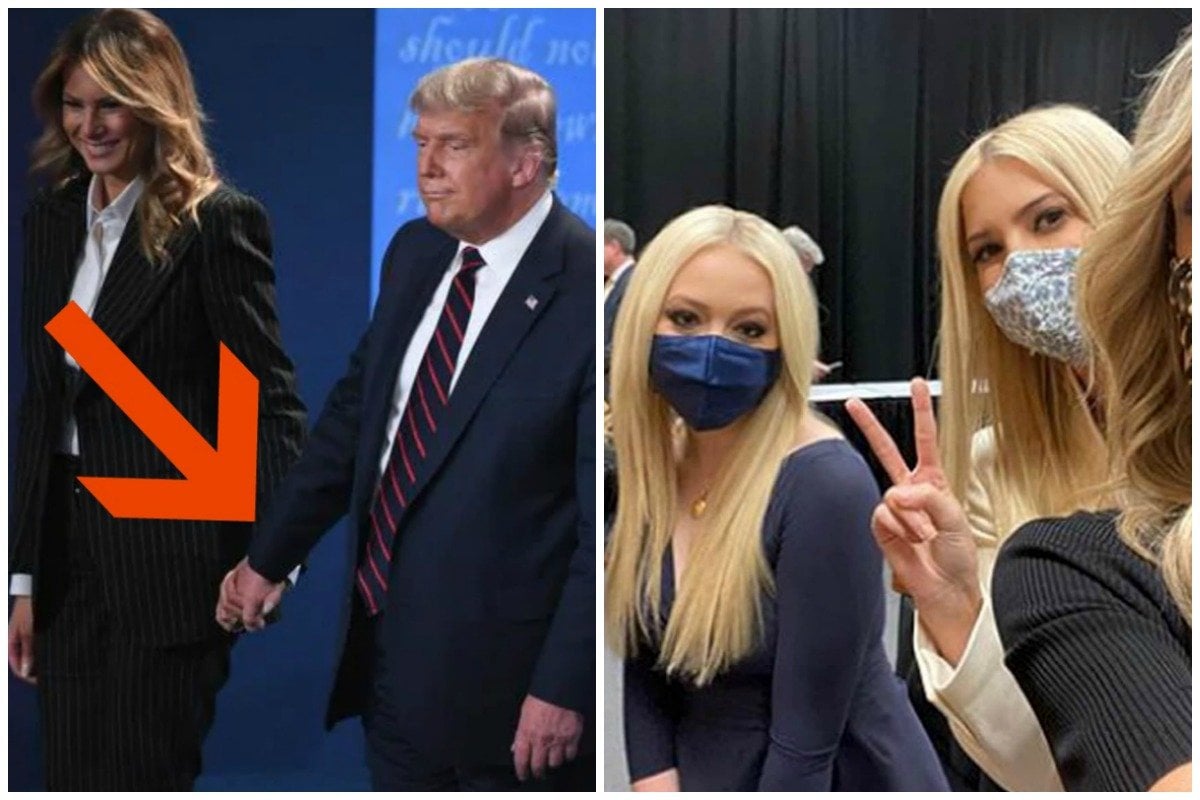 We've all had 24 hours to decompress and try to understand what the hell just happened in the first US presidential debate.

It was...complete chaos. To say the least. Marred by President Donald Trump's constant interjections and interruptions of both his Democratic rival Joe Biden, and debate moderator Fox News' Chris Wallace, it's been labelled as the "worst presidential debate in history".

In fact, the event was so hard to follow, that the group in charge of managing the next two debates are planning to introduce several new rules to make sure there's some degree of order when the two men take to the stage later this month.

WATCH: In case you missed it, here's Trump...shouting.

But in all the yelling and complete avoidance of anything that even resembles politics (which Mamamia recapped here), several important moments went unnoticed.

Here's everything we (and possibly you) missed.

1. Melania's 'uncomfortable' reunion with her husband.

Once the 90-minute debate had (finally) come to an end, Biden and Trump's wives joined them on stage. Today, it's Melania's interaction with her husband that's being noticed.

While Biden embraced wife Jill with a huge bear hug, Trump barely looked at his wife as she approached.

They gave eachother a stiff nod and an even stiffer smile, with Melania receiving a pat on the arm as she joined him at the podium.

Of course the couple aren't known for public displays of affection, but contrasted with the Bidens, the exchange was particularly uncomfortable.

2. The concerning reaction to Trump's commentary about white supremacy.

During the debate, moderator Chris Wallace asked whether the president would condemn white supremacists and tell them to stand down during protests.

"Sure, I'm willing to... but I would say almost everything I see is from the left wing, not from the right wing," Trump said.

Biden twice said "Proud Boys" when the president asked who it was he was being told to condemn.

The president then replied: "Proud Boys - stand back and stand by. But I'll tell you what... Somebody's got to do something about antifa and the left because this is not a right-wing problem."

Proud Boys, like many of the commentary's critics, took the statement as somewhat of a dog's whistle and promptly celebrated the president's words online.

The group is a self-described "Western chauvinist" organisation, and is considered a violent, nationalistic, Islamophobic, transphobic and misogynistic hate group.

The Proud Boys are ecstatic tonight about getting mentioned in the debate tonight.

"Trump basically said to go fuck them up! this makes me so happy," writes one prominent Proud Boy. pic.twitter.com/hYA7yQVAOn

They even went so far as to create a new logo with Trump's words emblazoned like a slogan, and have enjoyed a spike in memberships since the debate.

Speaking on the White House lawn this morning, Trump told reporters he "didn't know who they [Proud Boys] were."

Pressed on the issue, he said: "I've always denounced any form, any form of any of that," but didn't go as far as to clarify his use of the phrase 'stand by' during the debate.

Which is why a selfie taken backstage at Tuesday's presidential debate with stepdaughters Ivanka and Tiffany, and stepdaughter-in-law, Lara Trump, is causing quite the stir.

Although the women often attend events together, it's rare that Melania poses for any kind of social media picture. Instead she tends to stick to official photographs taken by professionals.

While the family were pictured wearing masks in the photo, Ivanka, Donald Trump Jr, Eric, Tiffany and Melania Trump were all seen with their masks off for most of the debate, despite wearing them as they walked in, and in photos.

Reporters noticed that representatives from the venue approached the family and asked them to comply with mask wearing for the entirety of the evening, but Bloomberg News reports they refused.

4. Biden's 'perfect' use of an Arabic phrase.

Biden and Trump were yelling about Trump's taxes, which is the story of the week.

Of course, viewers of the debate didn't get any clarity on the issue. Trump simply shouted, "I paid millions of dollars in taxes" while Biden yelled,  "show us your tax returns."

But it was a word muttered by Biden during the conversation that has many Arabic speakers abuzz.

Many have described Biden's use of the word so casually in the debate as "historic," with Twitter users from both the Muslim and Arab culture thrilled with its casual inclusion.

Social media was quick to calculate the cost of what Melania Trump was wearing last night, with her Dolce & Gabbana suit retailing at $4,656 AUD, and her Christian Louboutin heels coming in at $1,386 AUD.

Dr Jill Biden, on the other hand, recycled an outfit she wore in October 2017 at a fundraising event, and again at an appearance on MSNBC in February this year.

The green silk dress by New York sustainable brand Gabriela Hearst is made from recycled materials. Though now sold out, the Kelley design once retailed for $2,191 AUD.

What a surprise and honor to see that at last night’s debate Dr Jill Biden repurposed a GH dress she wore three years ago. Climate change is the biggest threat we are facing as a species. Sadly what we lost we can’t recover (60% of wild life in 50 years) but we can preserve and restore. We need the policy to do it and there is only one side right now unfortunately that is willing to admit what is real against all scientific proof. Vote this November

The commentary today is that both women sent 'messages' with their style choices, without saying a word.

6. The translators who simply couldn't keep up.

The debate was hard to follow in English, so imagine watching it via a foreign interpreter or in sign language.

With six voices on the recording, one Twitter user listening from Japan described the broadcast as "something akin to chaos".

Asahi Shimbun, one of Japan's major national newspapers, referred to the debate as: “a show that is like s**t”.

Here's a taste of what they (tried) to listen to:

People in Japan who watched it on NHK (our public broadcaster) had to watch three men shout over each other while three interpreters interpreted over each other simultaneously soooo yes but not really?🤔 pic.twitter.com/1gItayw55f https://t.co/vWV8Top38J

One Twitter user in Taiwan wrote that the translator in his country "straight up told his boss how the hell he is (sic) supposed to translate three people talking over each other live when this was happening."

An American who is deaf wrote: "Trying to watch six flying hands using sign language simultaneously. Made my eyes criss-cross."

Now, you might be tempted to think no one won, purely because no one really got to make any distinctive points.

CBS’s post-debate poll found that 48 per cent of viewers believed Biden won the debate, while 41 per cent saw President Trump as the victor.

Trump disagrees, and has since said "we won the debate easily last night," while referring to Biden sounding and looking "weak."

Biden on the other hand has called the evening a "national embarrassment."

Last night reinforced why I got into this race: We are in a battle for the soul of this nation — and it’s a battle we must win.