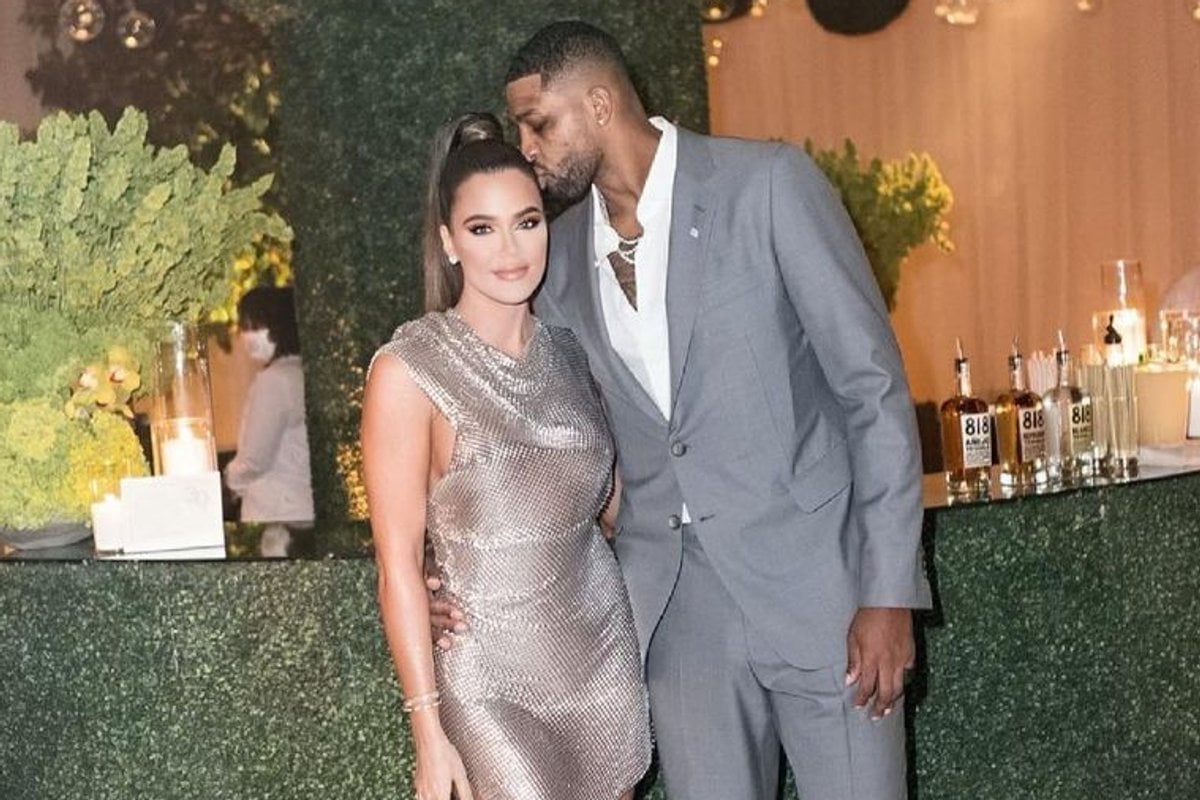 Khloé Kardashian and Tristan Thompson are expecting their second child together via surrogate.

This week, multiple sources confirmed the news to E! Online, sharing that the reality TV star, 38, and basketball player, 31, will welcome another addition to their family later this year.

"We can confirm True will have a sibling who was conceived in November," Kardashian's rep told the publication.

"Khloé is incredibly grateful to the extraordinary surrogate for such a beautiful blessing. We'd like to ask for kindness and privacy so that Khloé can focus on her family."

According to sources, the baby - which is supposedly a boy - was kept quiet not only for their surrogate's sake but also "to protect [Khloé's] mental health from judgement from the public as a result of Tristan's actions."

Watch Kylie Jenner share the moment she revealed she is afraid of her ex-best friend, Jordyn Woods, on Keeping Up With The Kardashians. Post continues after video.

Video via Keeping Up With The Kardashians.

Kardashian and Thompson have been on-and-off-again since 2018, and most recently split after he welcomed a child with another woman.

Here's a look back at everything that's gone down between the couple.

Only a few months later, allegations surfaced that Thompson had started dating the reality star while he was still in a relationship with the mother of his first child, Jordan Craig.

Craig gave birth to their son, Prince, in December 2016 - four months into Thompson and Kardashian's relationship.

However, the NBA star denied he ever cheated on his pregnant ex.

"When I met Khloe, I was SINGLE," he wrote to his followers on Twitter in a 2019 tweet.

"The negative comments that are constantly being directed toward her are unnecessary. She does not deserve all this backlash for my wrongdoings. Both Khloè and Jordan have been nothing but great mothers to my kids."

Also, when I met Khloe I was SINGLE. The negative comments that are constantly being directed towards her are unnecessary. She does not deserve all this backlash for my wrong doings. Both Khloè and Jordan have been nothing but great mothers to my kids.

Kardashian made a statement herself on Instagram, writing: "My truth is: I met Tristan because HE CHOSE to go on a blind date with me. A mutual friend set us up. After going on some dates, Tristan told me that he had an ex that was pregnant."

She continued: "Obviously, I was reluctant about us continuing to date or start a relationship. He pleaded with me that the relationship was over long before we met. He had me talk with his most inner circle. He showed me physical proof (correspondence between the two) and had me on calls with his lawyers to prove his point. His best friends, business associates, and even his mother told me, him and his ex were broken up before we met."

In court documents obtained by RadarOnline though, Craig's story differed. She admitted the timing of the relationships were a devastating reality for her.

"Every day several articles were published worldwide mocking my new unfortunate reality and my pregnancy would now become one of the most popular gossip headlines due to the woman Tristan was now publicly dating during my pregnancy," she said, further admitting she had faced a number of pregnancy complications due to her ex's cheating.

"Tristan insisted he would change for our family, and tried to get back together on numerous occasions," she added.

In April 2018, footage from the year prior was leaked to TMZ showing Thompson allegedly motorboating and kissing two women at a hookah lounge.

At the time, Kardashian was pregnant with their first child, True.

While neither made a statement, it added a serious chink in the armour of their already shaky relationship.

That same month, Thompson was caught speaking intimately with another woman in a brief clip taken at rooftop bar.

Later, Page Six reported that the pair were seen entering a hotel together in the early hours of the morning.

The pair spent the entirety of the weekend together, while Kardashian was days away from giving birth.

The woman, Instagram model and influencer, Lani Blaire, told Us Weekly during her birthday in June 2018: "I’m not even thinking about that right now. I just want to go inside. Have a good time. Have a couple drinks."

While the pair reconciled and stayed together after welcoming True, all would not remain cordial in the Kardashian world.

In one of the most infamous of scandals for the family, social media and online news sites were set ablaze in February 2019 with rumours that Thompson had cheated AGAIN with Kylie Jenner's best friend Jordyn Woods. And the rumours were true.

Woods later denied that the pair cheated, admitting that they shared a brief kiss while appearing on Red Table Talk with Jada Pinkett-Smith.

What went down afterwards though - whether it be through furious tweets, cryptic Instagram posts and fiery scenes on Keeping Up With The Kardashians - was nothing short of chaotic.

Kardashian allegedly called Woods a "fat f***ing a**hole" over the phone during one episode.

The entire family conducted a mass unfollowing of both parties, and Jenner admitted she was "scared" of her ex-best friend for being able to "[wake] up the next morning with a smile on [her] face".

In April 2019, an episode of the No Jumper podcast, hosted by Adam22, went live, and in it were some pretty disturbing details.

The episode featured four women who call themselves 'The Blackout Girls'.

During the interview, one of the women named Sidney was asked how Tristan's "d**k" was, to which she replied: "It was a peek-a-boo d**k but baby it was good".

She went on to say she wasn't sure if their interactions went on while the father-of-two was in a relationship with Kardashian.

Sidney went on to say they were seeing each other in "either January and February of 2021", adding that she decided to end their fling after discovering he was still with reality star.

Following the interview, Kardashian took to her Instagram Stories to share some emotional quotes that could possibly point to her thoughts about the episode.

In another post, she shared a quote which read: "Invest in your energy, invest in your environment. Your environment has a direct impact on your life, so be intentional with it. Surround yourself only with people who contribute to your growth and expansion. All energy is contagious."

Alas, the story isn't over yet.

In 2021, Thompson landed himself in another cheating allegation, and this time it came with a baby and a serious lawsuit.

The NBA star was given a paternity lawsuit filed by Maralee Nichols in June 2021, a personal trainer who said she was pregnant with his third child.

The news did not break until December, and Nichols gave birth on December 3, 2021. She sued the sports star for child support and reimbursement for pregnancy-related expenses.

The legal documents obtained by the Daily Mail alleged the baby was conceived back in March, where she claims they had sex at a hotel in Houston, Texas. In these documents, he admitted to having sex with the personal trainer but claims it was nothing more than a one-night stand.

However, Nichols says their sexual encounter happened months before Thompson split with Kardashian, and added that their relationship continued for months before and after the hotel debacle.

"When we got to my hotel room, we immediately had sexual intercourse," Thompson allegedly said in a declaration. "Petitioner [Nichols] initiated our sexual contact and never objected to our having sexual intercourse. She was very awake and conscious and did not exhibit any signs that she was other than a willing participant in our sexual activities."

The lawsuit also included messages seemingly screenshotted from Snapchat. In them, Thompson allegedly told Nichols he had no plans to be involved in his third child's life, and encouraged her to take $75,000.

Tristan Thompson allegedly offered woman $75K to get rid of their baby she’s pregnant with pic.twitter.com/jaRogug45Y

"You know how I feel. My feelings haven’t changed at all. Won’t be involved at all," the messages read. "Btw if you think having this baby is gonna make you some money. It’s completely wrong. You are aware that I’m retiring after this season. So in terms of support it will be whatever is required monthly for someone who’s unemployed. It’s Texas so it will be only a couple hundred dollars. So you better off taking this 75k I’m offering cause you won’t get nothing near that with having a kid with a father who’s unemployed."

He has denied sending the messages, according to the suit, but did admit to having a "sporadic," ongoing sexual relationship with Nichols, as reported by PEOPLE.

Thompson also denied any possibility of being the father, but later confirmed he is the father of Nichols' child, Theo Thomspon. 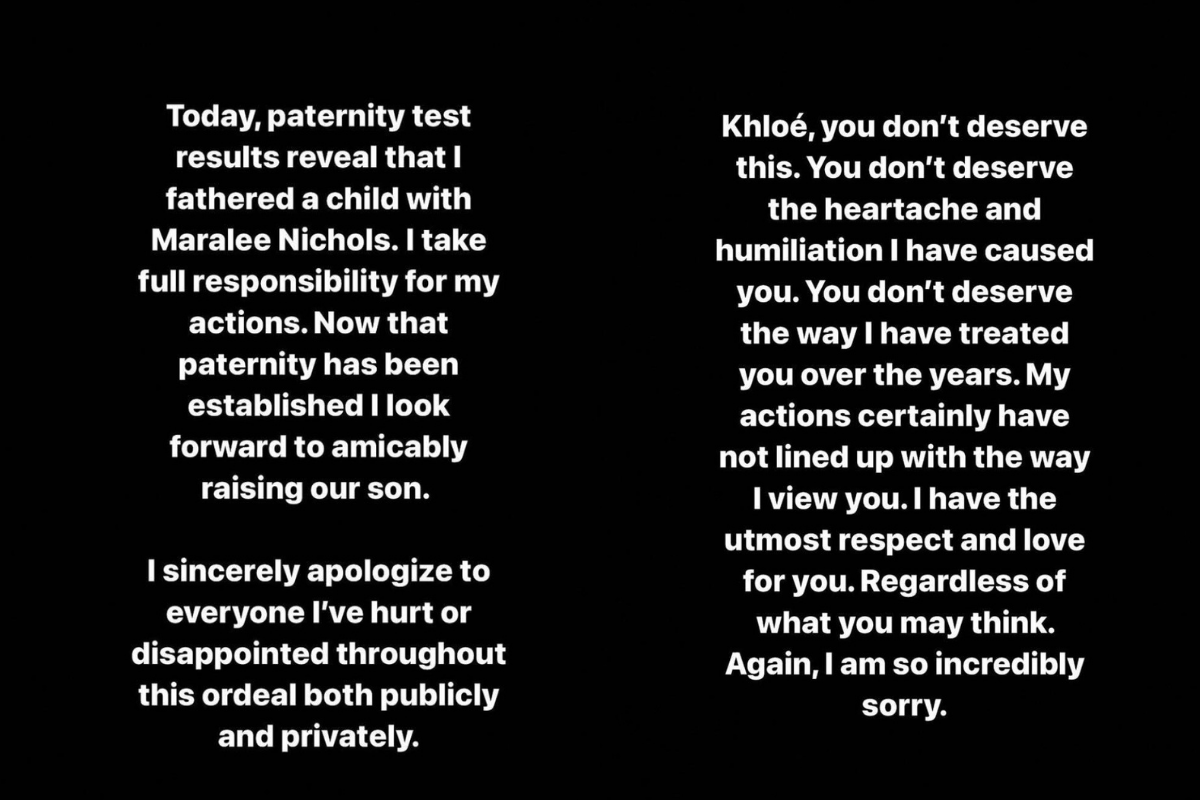 Thompson publicly apologised to Kardashian, who he was dating when his son was conceived.

"You don’t deserve the way I have treated you over the years. My actions certainly have not lined up with the way I view you.

"I have the utmost respect and love for you. Regardless of what you may think. Again, I am so incredibly sorry."

Since the news broke that couple are expecting their second child via surrogate, sources confirmed the baby was conceived in November 2021, before this most recent scandal came to light.

"The baby was conceived via surrogate before it was revealed to Khloe and the public that Tristan was having a baby with someone else," the source told E! News.

According to the timeline, however, Thompson was aware of the paternity lawsuit with Nichols in June 2021, and he sued her in July demanding she take a paternity test.

He did not tell Kardashian this, even as they prepared to have another child.

Kardashian has not yet publically responded to the new baby news.

Reply
Upvote
Such weird responses from him. Possibly the product of stunted maturity and zero sense of responsibility often seen with elite sportspeople. He does know it doesn’t take dinner and a movie to impregnate someone right? Why emphasise it was just sex? Yep - that is precisely what causes pregnancy (and STDs)
Love and respect?? Please… lots of unprotected sex with others and coming home looks like absolute disregard at best.

Reply
Upvote
3 upvotes
Well, by now Khloe can't say she doesn't know what to expect. There's no way he'll change if she stays with him - why would he, he never seems to face any consequences for his actions. It's a shame that these children are now involved. Screw around all you want, but at least have a bloody vasectomy rather than leaving a trail of kids behind you.
Resources
Very Peri
Skin
News
General
Opinion
True Crime
Politics
Sport
Explainer
Entertainment
Celebrity
Reality TV
Movies
TV
Books
Rogue
Royal
Lifestyle
Beauty
Fashion
Weddings
Home
Wellness
Health
Fitness
Travel
Food
Family
Before The Bump
Pregnancy
Baby
Kids
Teens
School
Parent Opinion
Work & Money
Money
Finance
Career
Lady Startup