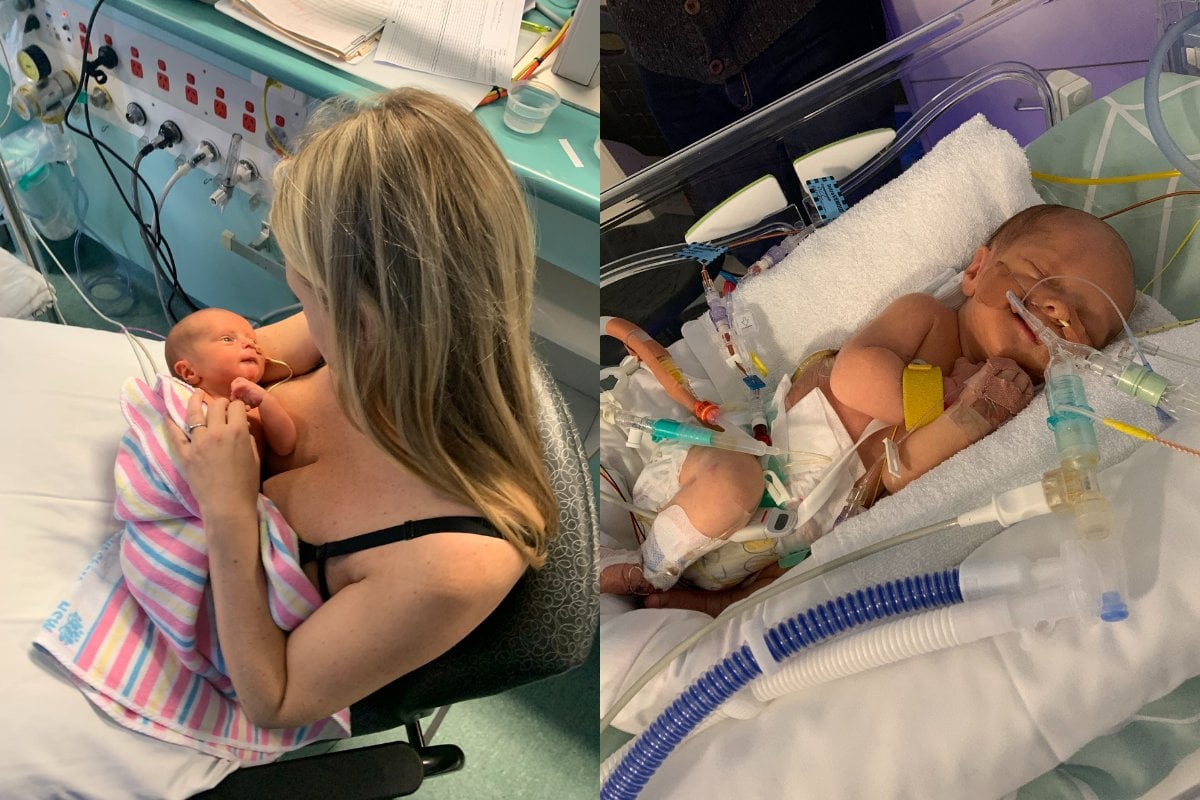 After trying to conceive for several years, we were over the moon when we finally found out we were pregnant and having a boy.

I was lucky enough to enjoy a relatively easy pregnancy, until towards the end when we found out that the placenta wasn’t functioning as well as it should be, meaning our baby boy was on the lower percentile.

To avoid any risks during the birth, my obstetrician recommended a caesarean at just under 38 weeks to ensure he could be delivered safely.

Watch the trailer for Mamamia's podcast, The Delivery Room. Post continues below.

I was very nervous about some of the complications, but also excited in the lead up to the birth as I couldn’t wait to meet my baby boy.

I remember being in the operating room and the obstetrician saying, ‘You’re going to meet your baby boy in the next ten minutes’, and for the first time I started to relax.

Before I knew it, I could see his beautiful little face and hear his cry and a wave of relief washed over me.

After doing all the checks to confirm everything was normal, Joseph was in my arms and staring into my eyes. I just stared in amazement at how perfect he was.

Over the next 12 hours, things ran smoothly with him taking straight to the breast and feeding perfectly.

He was coughing up mucus, but I was told that was normal after a caesarean, as it doesn’t get pushed out of their lungs as it does in a vaginal birth.

I spent most of the night holding him upright as it seemed to get worse after he fed, so despite not getting much sleep I was on cloud nine and so in love with my beautiful baby.

The next day the mucus didn’t seem to be clearing and the midwife took him to the special care nursery to investigate further.

My partner went down with him as I was still unable to move around much, but about half an hour later came back with tears in his eyes, looking extremely worried.

Before we knew it, the paediatrician was in our room explaining what he suspected and, from that moment onwards, things escalated very quickly.

After being rushed down to the Newborn Intensive Care Unit (NICU) at The Royal Hospital for Women, Sydney, Joseph was diagnosed with a rare birth defect that affects one in 5,000 babies.

Nothing prepares you for being told there is something wrong with your baby or seeing him in one of the baby incubators.

I couldn’t believe how quickly things had turned from this happy, perfect moment, into every new parent's nightmare.

He had to have a nine-hour operation to fix it. It was one of the longest days of my life. It was nerve-wracking.

Joseph went into the operation at 8am at The Royal Hospital for Women and we sat in our room all day, sick with worry as we waited for news.

As if sensing our distress and anxiety, the hospital staff were brilliant, updating us about his progress as the day went along. But it was hard to focus on anything.

We were beside ourselves with worry and still in shock about what was happening to our tiny newborn boy.

The surgeons, neonatologists and paediatrician reassured us that this was a routine operation and something they had performed before, but I kept thinking as the hours ticked by, 'This is such a huge operation for such a tiny baby.'

Joseph finally came out of surgery at 6.30pm with the news we were yearning to hear: all was well despite a very long and complicated surgery.

Seeing him with so many tubes and wires was just heartbreaking, and I struggled to keep it together despite being so happy that the operation was a success.

Although I had held Joseph when he was born, we had to wait six long days while he lay in the Newborn Intensive Care Unit before I could hold him again after his surgery.

My partner and I spent as much time as possible sitting by his incubator, talking to him, singing to him and placing our hands on him so he knew we were there.

That was probably the longest and hardest few days of my life, but it was worth it for the special moment when I got to hold him close again.

I was so incredibly happy to have him with us, safely in my arms after such an ordeal. I didn’t ever want to let him go.

Joseph has been home with us now for almost a month and is doing well putting on weight. This time has been even more special because of the difficult start and we have been cherishing every single moment with him. He’s a very determined little boy and has surprised everyone with how quickly he has recovered.

The Royal Hospital for Women relies on donations to ensure it can stay at the forefront of medical technology, including equipment like the NAVA ventilator that kept our son safe during his first week of life. To show our appreciation we are fundraising and you can help by making a donation here.

Calling all potential or new mums! Like a $50 gift voucher for your thoughts? For your chance, take our quick survey.