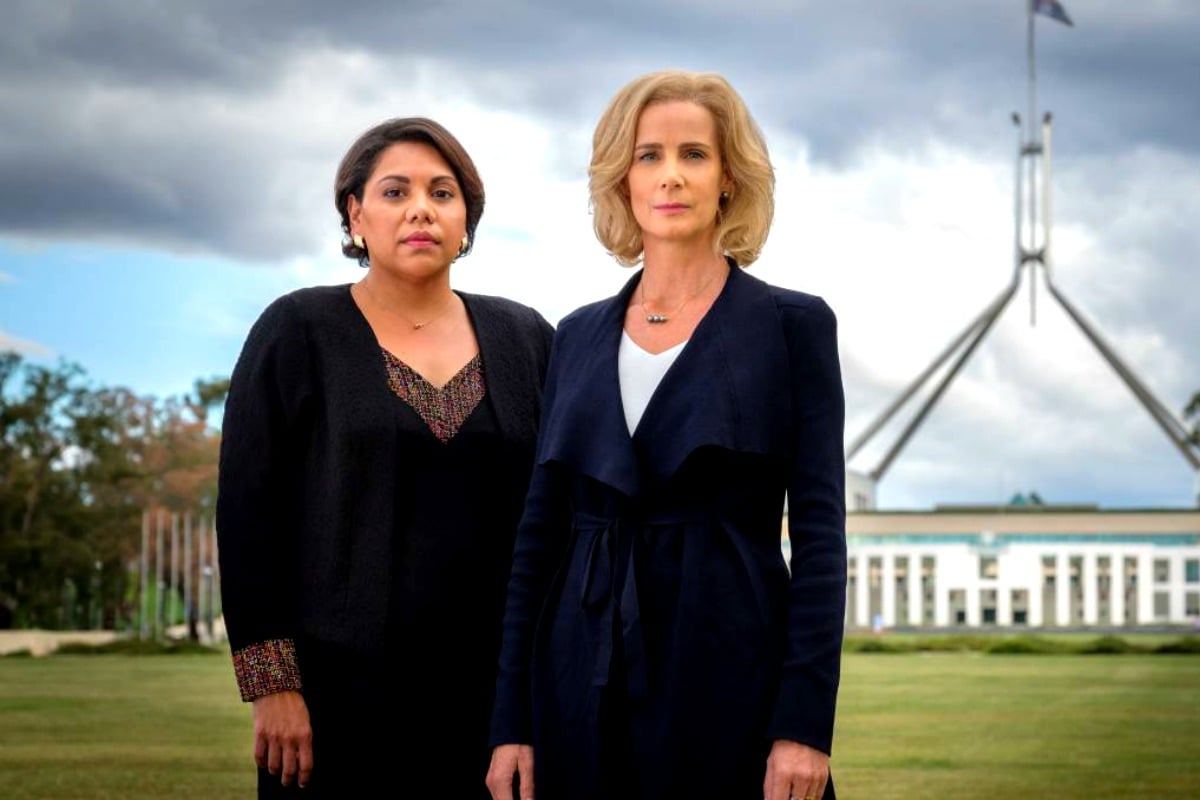 Total Control is a TV series with the power to make you feel deeply uncomfortable, particularly with its opening scene.

The new ABC six-part political drama stars formidable Australian actresses Deborah Mailman and Rachel Griffiths in a story that encompasses ambition, betrayal and treachery which all play out in one of the most treacherous places in our nation, the halls of Parliament House in Canberra.

“It’s such a punch in the guts in terms of how to start a show with that kind of intensity,” Deborah Mailman said in reference to the scene on Mamamia’s entertainment podcast The Spill. “That was a difficult scene because there are a lot of stunts involved and there is a gunman, a car crash, some dead bodies and people just running all over the place.

“I play the role of Alex Irving and she’s a country girl from outback Queensland who lives in Winton. The event that happens in the opening scene of the show then pushes her into the national headlines and she gets the attention of Prime Minister Rachel Anderson, played by the incredible Rachel Griffiths.

“She comes to see Alex in her hometown and asks her to be in the Senate and Alex sees it as an opportunity to make a real change so she comes into parliament as Senator for Queensland. Right from the get-go, as soon as she walks into the corridors of parliament, there is a lot of judgment around her. She is not taken seriously, but she is about to prove everyone wrong.”

The star of iconic Australian productions such as The Secret Life of Us, The Sapphires and Offspring said Blackfella Films, the production company behind Total Control, in conjunction with Rachel Griffiths, were committed to kicking off a national conversation with this show.

“Blackfella Films want their shows to be conversation starters and Rachel Griffiths, who is an executive producer on this, she just wants to see fantastic, complex female characters on screen and that’s what Alex and the Prime Minister are. To have flawed people on our screens is important.

“She’s in Canberra and she’s had a terrible first day in parliament, so she goes to a bar and looks at this fellow across the room and, you know, you’ll see in the first episode what happens there.

Total Control does examine a range of topical Australian issues as it tracks Alex’s first days in Canberra to the betrayal that unfolds around the Prime Minster’s cynical reason for really wanting her there, touching on entrenched racism and inequality, the incarceration of Indigenous Australians, land rights and the rampant sexism that follows women in politics along the way.

A different story thread that is weaved throughout the fabric of Total Control is led by up-and-coming Indigenous actress Shantae Barnes Cowan, who delivers some of the shows most emotional moments in scenes that are light on dialogue, so it’s left up to her facial expressions to convey the gravity of what is really going on.

“Another story that runs parallel to Alex’s in the show is about a young Indigenous girl who witnesses the death of her friend in custody and so she escapes detention,” Deborah says on The Spill. “That’s another story that plays out and it shows the human side of policymaking and the consequences of what those policies are that are happening in Canberra and in parliament. You see what those consequences are when it comes to those young Indigenous people in the show

“This is what we want in the industry, we want these young artists coming in and having these opportunities. Shantae is just beautiful, is lifting a really heavy storyline here and she is only 16 years old.”

Total Control features an impressive ensemble cast including William McInnes, Rob Collins, Celia Ireland and Trisha Morton-Thomas and with a stand-out performance from Deborah Mailman, paired with a cutting and topical script, this is a series that secures a spot as one of the best Australian offerings of the year.

Total Control will premiere on ABC on Sunday October 13 at 8.30pm on ABC and iView.