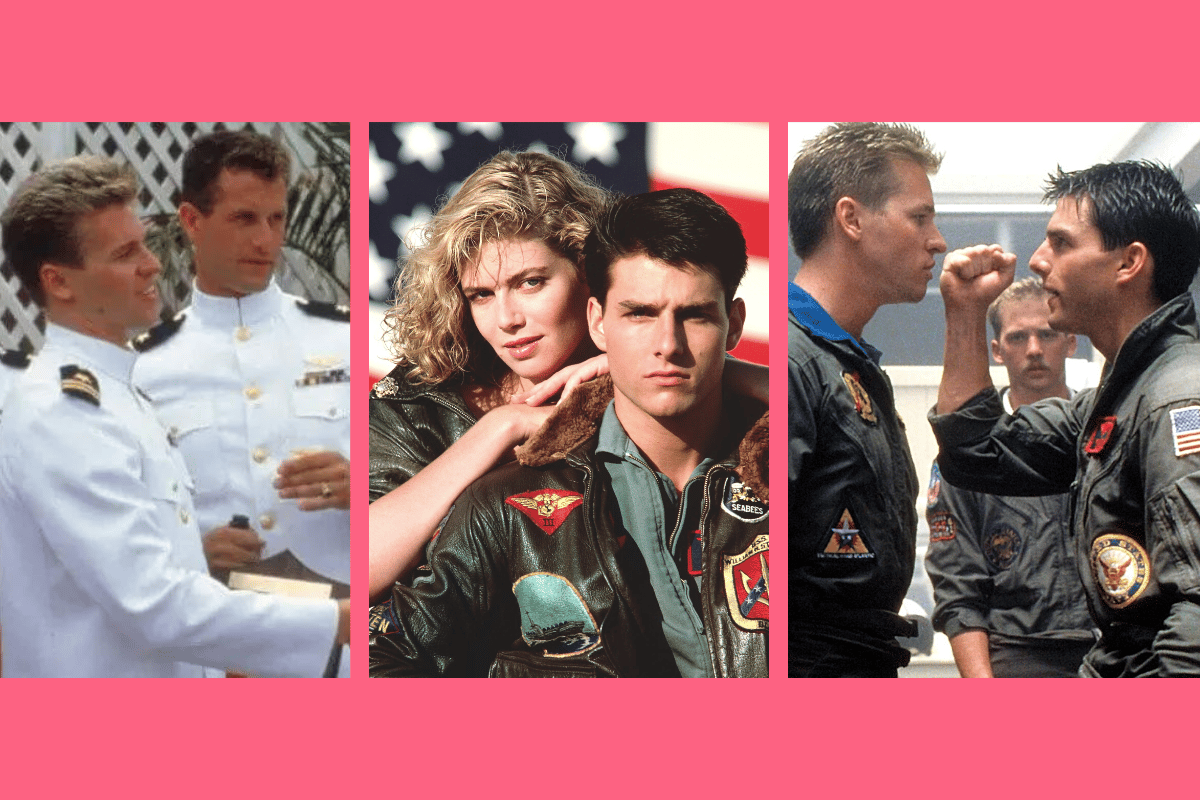 The movie, directed by the late action filmmaker Tony Scott, became a pop culture moment in itself, with nicknames like 'Iceman', 'Maverick' and 'Goose' being divvied up among friendship groups for years to come.

The storyline goes as follows – Code-named 'Maverick', Pete Mitchell, a confident daredevil Navy-pilot ace, is accepted into Top Gun, Miramar's elite Fighter School. But there, the impulsive young pilot has to compete with the best of the best, including Iceman, a brilliant yet arrogant fellow student.

It catapulted stars like Tom Cruise, Val Kilmer and Kelly McGillis to fame. Plus, there was plenty of action to marvel at, with epic plotlines, aerial scenes and iconic stunts.

And the soundtrack? Stellar.

With Top Gun: Maverick now in cinemas, we thought it perfect timing to look back on the original – because we have plenty to unpack!

So without further ado, here are eight things you probably didn't know about Top Gun.

1. Plenty of Hollywood A-listers were offered the role before Tom Cruise.

It does feel a little weird to imagine anyone else playing Maverick other than Tom Cruise. But in the early days, producers were struggling to find their lead actor after multiple dead ends. 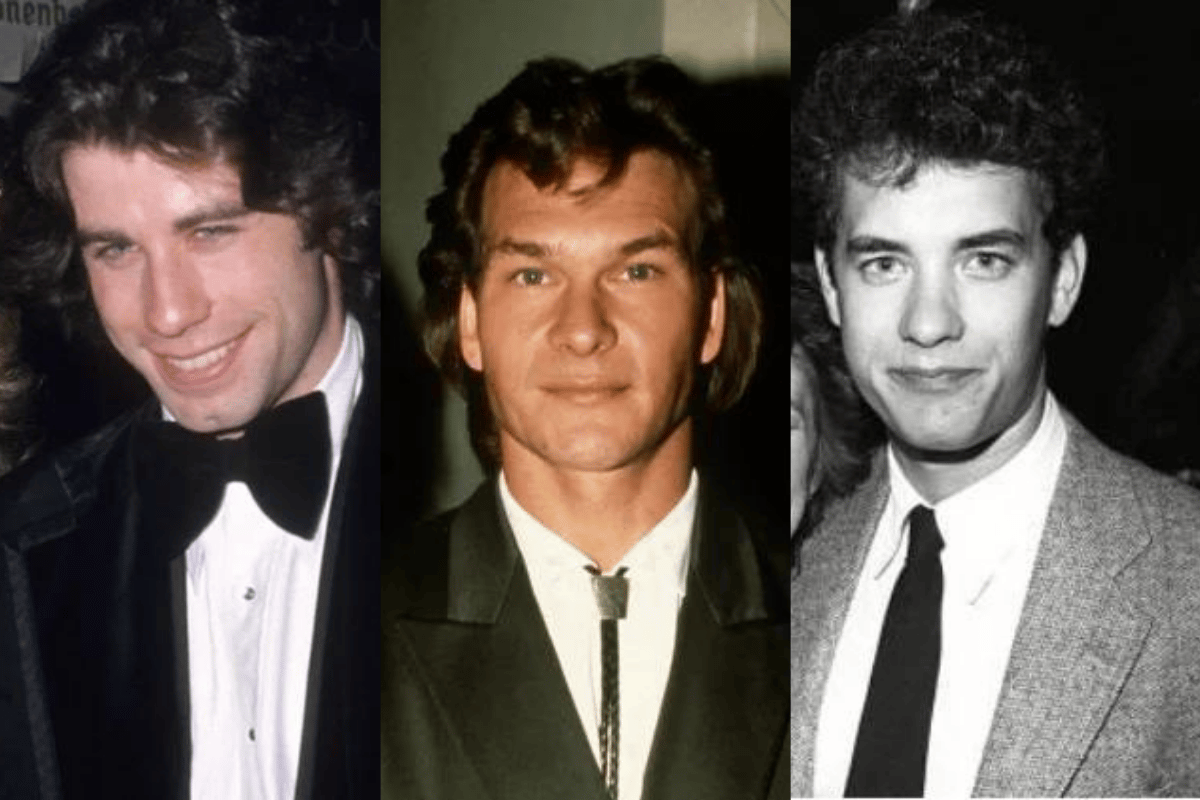 In the end, his recent films at the time had been a bit of a bust at the box office and so producers decided it would be too much of a gamble to take him on. He was also asking for quite a lot of money!

2. Tom Cruise was initially unsure about taking the role ...until he flew in a F-14 aircraft. 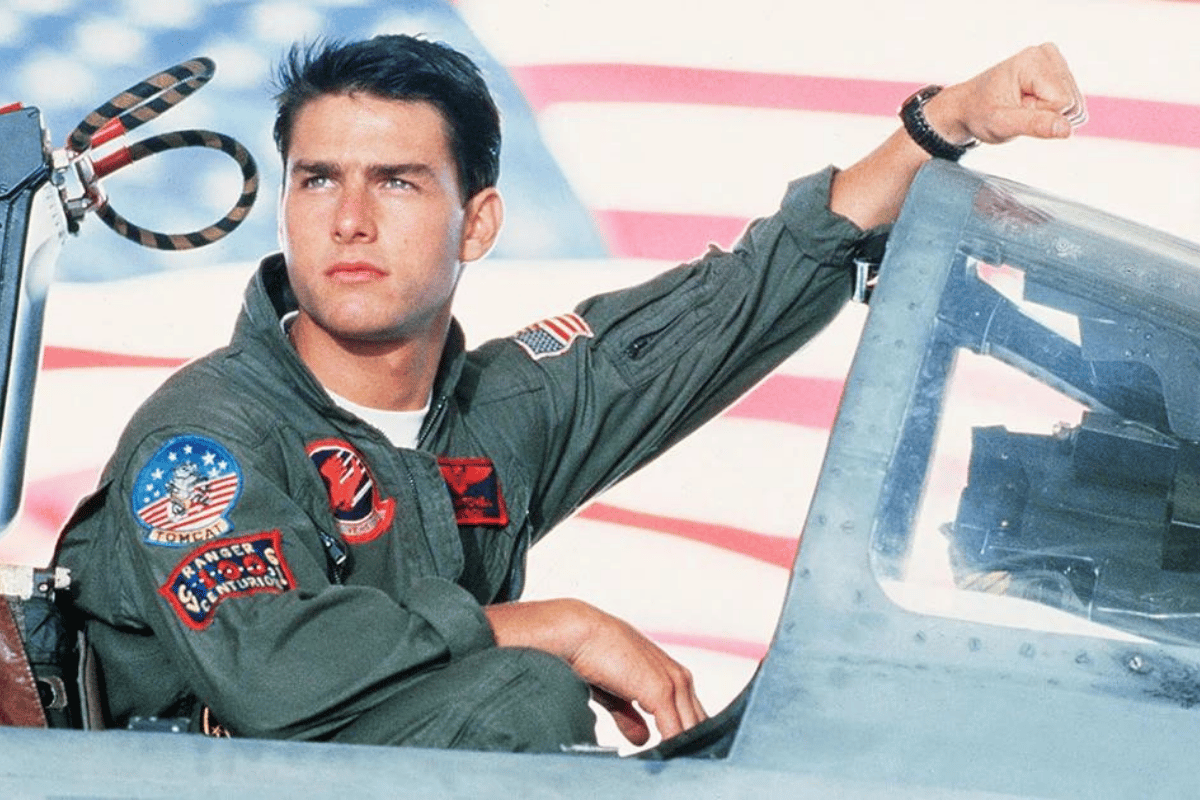 Given all the challenges producers had with the first few potential actors, they initially thought Tom Cruise would turn down the role of Maverick too.

After seeing Cruise in the 1983 film Risky Business, producers knew Cruise could be good for the role. So to try and offset the actor's scepticism, they sent him to the Naval Air Facility in California so he could go on a ride in an F-14 aircraft.

After the trip, Cruise immediately got on the phone and accepted the job.

Ever since, the actor has spoken about his love for flying and how much he enjoyed reprising the hobby for Top Gun: Maverick.

While none of the actors were ever actually operating the aircraft controls, Cruise said he was committed to capturing as much real cockpit footage as possible, which meant he had to do his research.

3. The film was used by the Navy to drum up recruits. 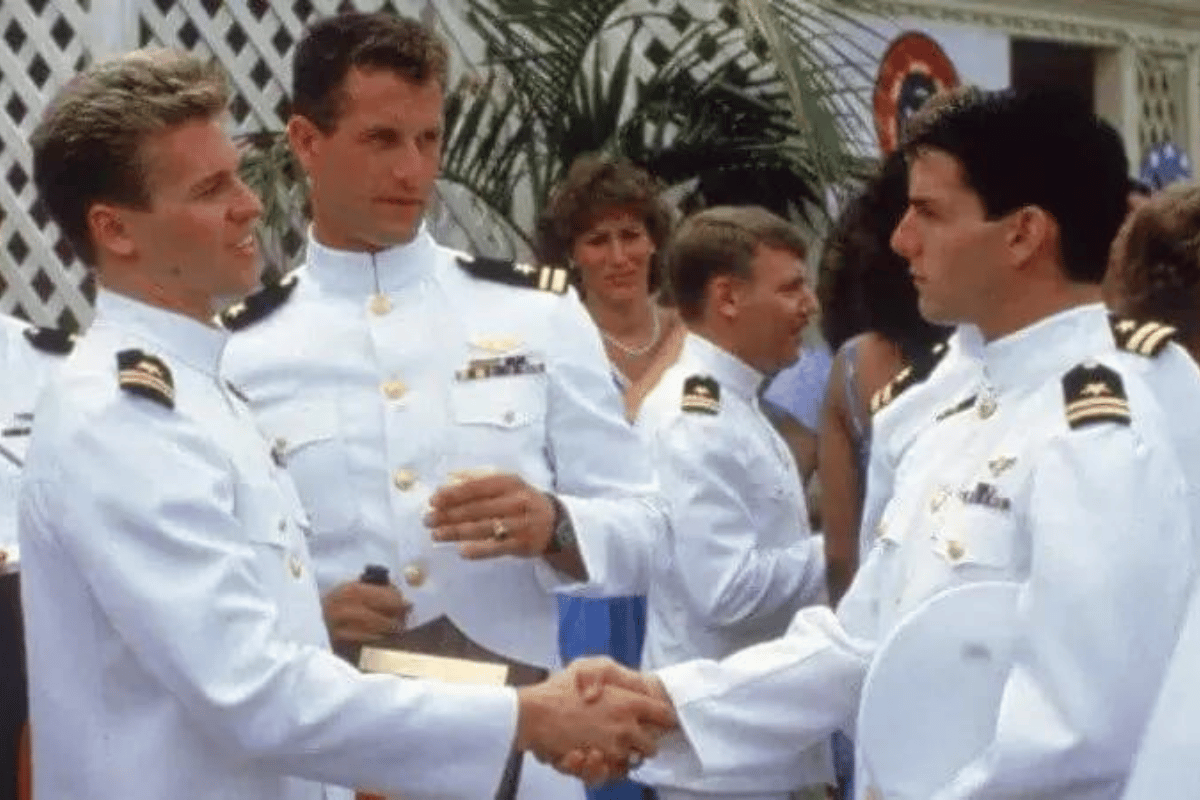 Top Gun wasn't necessarily a straight advertisement made by the Navy, but it ended up kinda being one.

Throughout the filming process, the US Navy played a consultative role with production just to ensure the storyline, terminology and props used were as authentic as possible.

And in the end, Top Gun was a massive hit with young American men – leading many to seek out a future in the defence force.

With this in mind, the Navy embraced the audience's enthusiasm and began signing up new members for its ranks by installing recruitment booths at some cinemas around the country. Interestingly, there have been multiple reports that the Navy are once again recruiting around theatres now that the sequel is out.

In total, the number of young men wanting to be naval aviators shot up by 500 per cent in 1986.

4. The director loved the song 'Take My Breath Away' so much, it inspired him to film a romance scene. 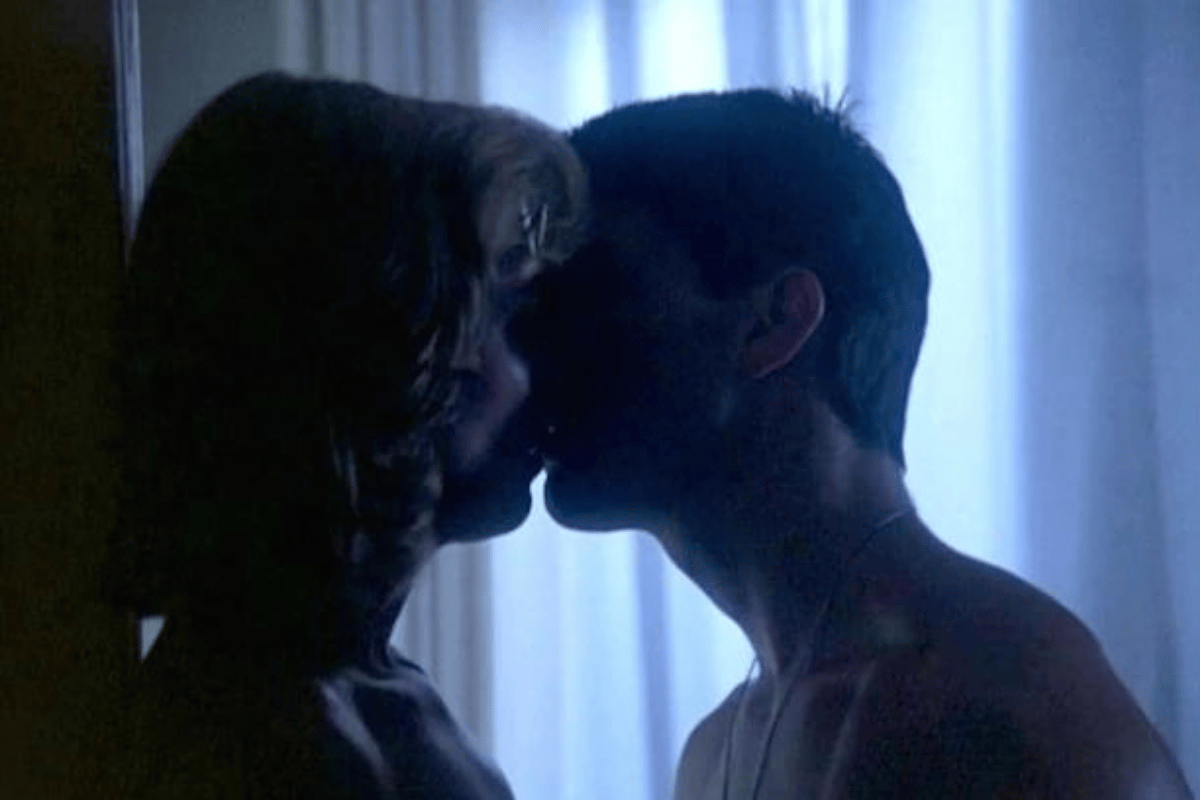 Some movies are just synonymous with hit songs.

The Breakfast Club's 'Don't You (Forget About Me)' by Simple Minds. 'Footloose' from well, Footloose. Dirty Dancing and '(I've Had) The Time of My Life'. The list could go on.

And with Top Gun, there are two major songs front of mind – 'Danger Zone' by Kenny Loggins and 'Take My Breath Away' by Berlin.

Who could forget the romantic scene between Tom Cruise and Kelly McGillis with 'Take My Breath Away' playing in the background? Iconic.

It appears the movie's director thought the same because nearing the end of the filming process, the director knew that a love scene was needed once he'd heard the song.

And so he decided to film that scene between Cruise and McGillis months after the first days of filming. They made sure the scene was lit differently so that the audience wouldn't know it was filmed months apart, given both actors looked a little different after a fair few months.

Of course, the song hit the charts when the film was released – and Berlin has Top Gun to thank for that.

5. Tom Cruise and Val Kilmer reportedly got a little too invested in their method acting. 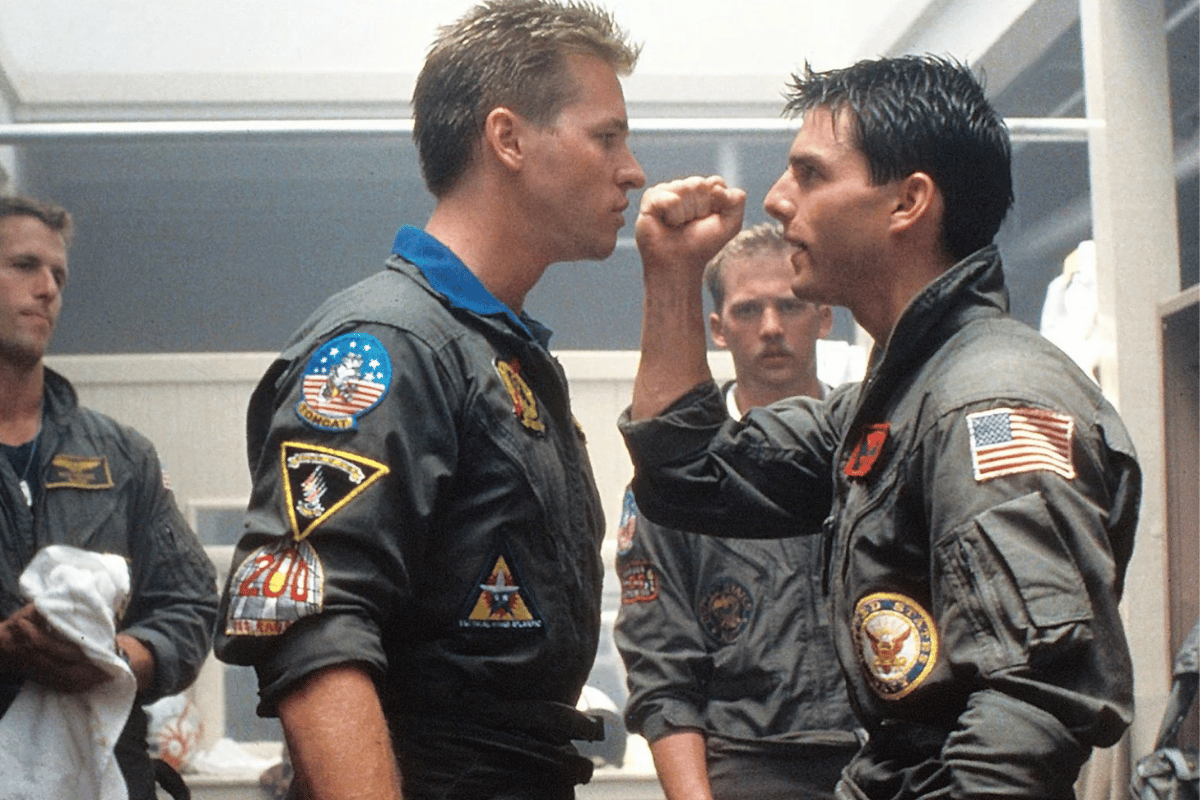 And for years there were rumours that the rivalry had extended beyond the screen. Kilmer confirmed this in his 2021 documentary Val, saying they had an "off-camera rivalry".

But he elaborated on the rumours by saying although there was tension, a lot of it came down to the fact the pair were both 'method acting'.

"On the page, there was very little to the character Iceman, so I tended to make him real," Kilmer explained in the documentary. "I manifested a backstory for him, where he had a father who ignored him, and as a result, I was driven by a need to be perfect in every way. This obsession with perfection is what made him so arrogant."

He continued: "I would purposefully play up the rivalry between Tom's character and mine off-screen as well. And what ended up happening is the actors, in true method fashion, split into two distinct camps. You had Maverick and Goose (Anthony Edwards) on one side, and Slider (Rick Rossovich), Hollywood (Whip Hubley), Wolfman (Barry Tubb) and me, Iceman, on the other."

As the years have passed, the pair have remained friendly. Let's hope they didn't go too method in the sequel for both their sakes!

6. One of the stunt pilots sadly died during filming. 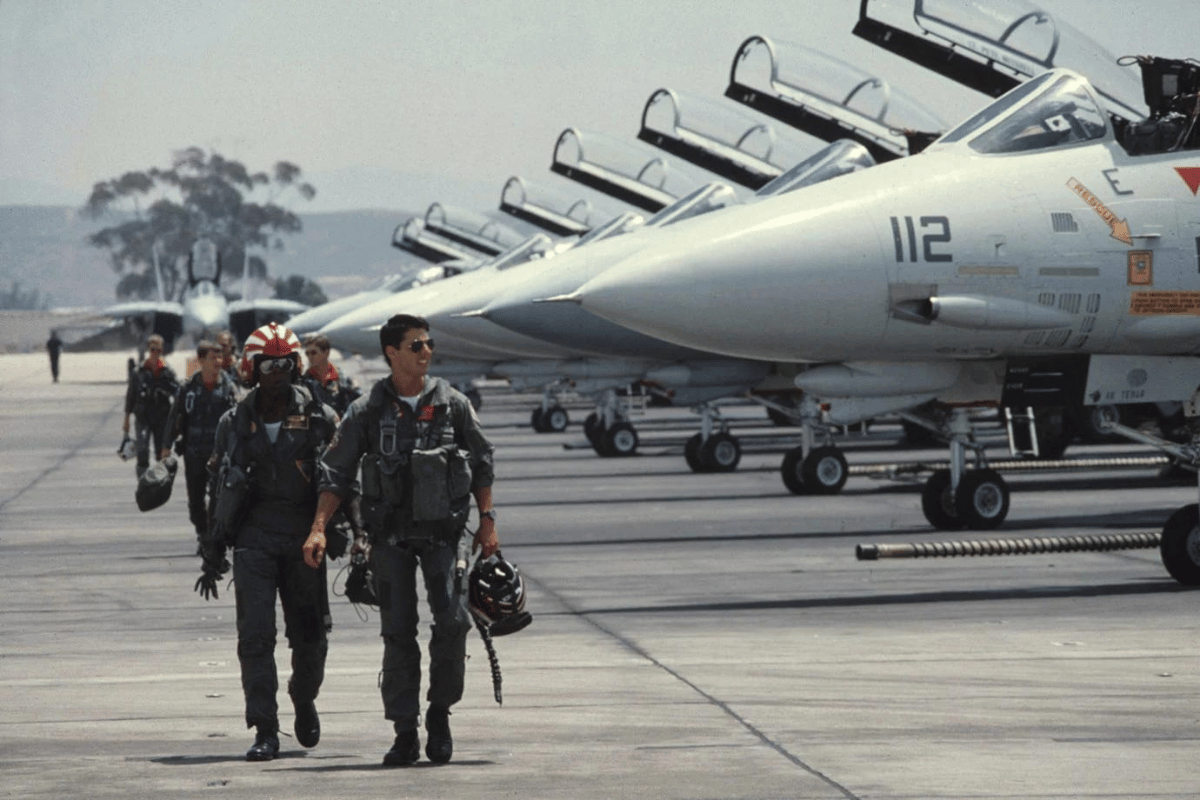 While filming in 1985, there was a tragic accident that took place.

54-year-old stunt pilot Art Scholl was killed during the film's shoot, when his plane failed to revert from a flat spin and nosedived into the Pacific Ocean. It was believed that it was a mechanical fault, with his last words spoken over radio being: "I've got a problem here."

The plane and his body were sadly never recovered.

He was regarded as "the last of three top Hollywood stunt pilots" at the time. The others were Paul Mantz, who at 61 crashed and died in the desert in 1965 while flying for a scene and Frank Tallman, who died at 58 when his twin-engine plane crashed into an Orange County cliff in 1978.

The Top Gun film was dedicated to Scholl's life.

7. Kelly McGillis has said she wasn't invited back for the sequel because of her age and weight. 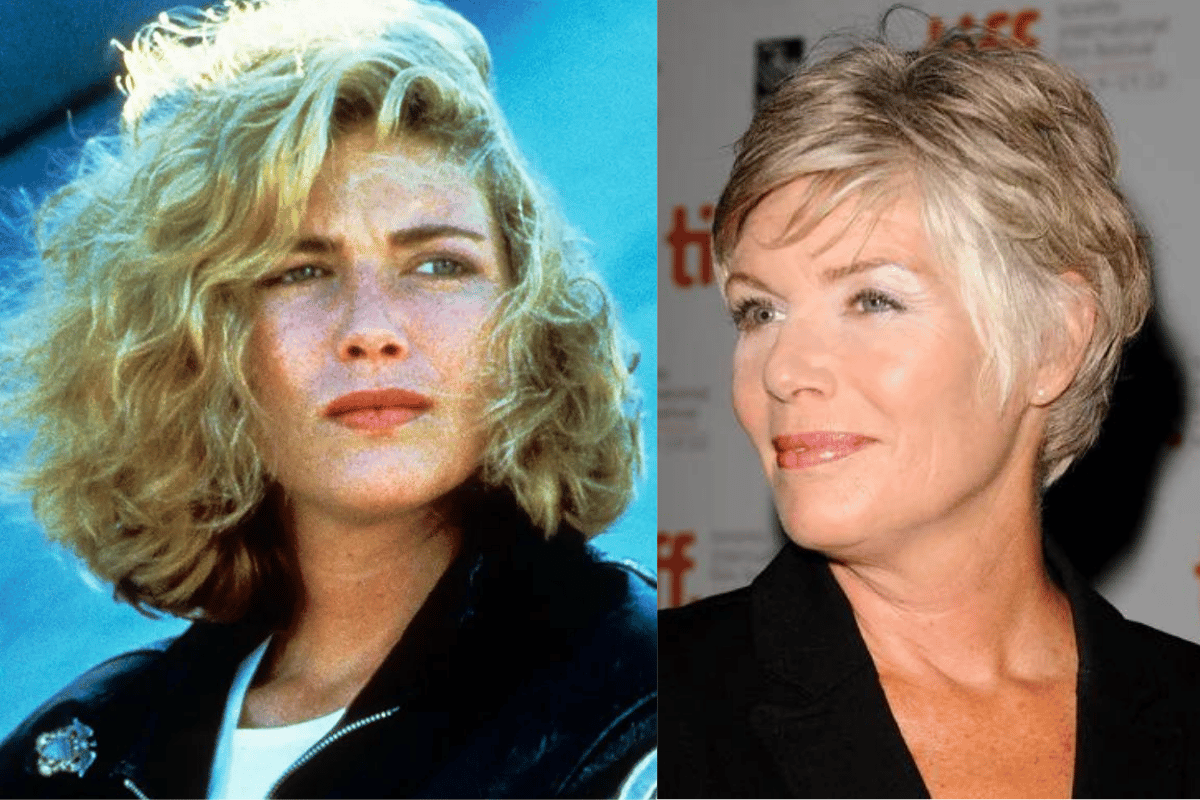 In fact, the Golden Globe nominee wasn’t even asked to be part of the film – but she wasn't really surprised about that. To McGillis, the reason is really quite simple.

"I'm old and I'm fat and I look age-appropriate for what my age is, and that is not what that whole scene is about," she recently told Entertainment Tonight. "But I'd much rather feel absolutely secure in my skin and who and what I am at my age as opposed to placing a value on all that other stuff."

In the sequel, Cruise reprised his role as Maverick with Jennifer Connelly starring as his main love interest.

8. Val Kilmer's voice had to be digitally recreated for Top Gun: Maverick.

Val Kilmer now speaks through a voice box after a throat cancer diagnosis. He was actually staying in Cher's guest house back in 2014 when he realised that something was wrong.

"Suddenly I awoke vomiting blood that covered the bed like a scene out of The Godfather," he wrote in I'm Your Huckleberry.

After being diagnosed with throat cancer, Kilmer kept it a secret. He later shared that he had undergone chemotherapy and radiation. He also had two tracheotomies, and now uses a feeding tube.

Given Kilmer speaks using a voice box now, producers knew that getting Kilmer to return to Top Gun: Maverick would entail extra work. Within his scene in the new film, Kilmer's voice was recreated using archival recordings and modern technology. They were able to use recordings throughout the actor's career to create an artificial mock-up.

Speaking about the effort the production team went to, Kilmer said, "I'm grateful to the entire team at Sonantic [the editors behind the technology] who masterfully restored my voice in a way I've never imagined possible."

Do you have a Top Gun fun fact? Let us know in the comments below.

Reply
Upvote
What has happened to the great movie theme song? I can't remember the last big hit that came from a movie - not counting musicals like Encanto etc. Guardians Of The Galaxy had a lot of good old songs, but not that one particular big song. Was the 80s the big Movie Song heyday?
S
snorks a month ago

Reply
Upvote
@rush possibly the James Bond films, but I agree, it's pretty rare now
M
mb1111 a month ago

Reply
Upvote
@rush only Disney comes to mind. If you have children under 10 you will have had Let it Go on repeat for years. Moana was good too.

Reply
Upvote
@mb1111 I loved Moana! I'm not really counting musicals - although We Don't Talk About Bruno was definitely the biggest movie song I've seen in years! Thinking back, there were a couple from the Fast And The Furious movies - one from Paul Walker's last filmbut they just don't seem to be that common any more. Same with the catchy sitcom theme, another 80s classic that seems to have disappeared!
L
laura__palmer a month ago

Reply
Upvote
@rush Billie Eilish does a great one for the new bond film, she won an oscar for it with her brother. It's classic Bond, but still really modern and original.
S
snorks a month ago