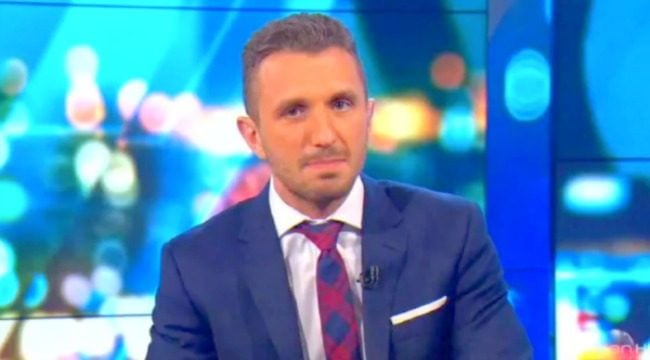 Look, we get it. You guys are Tommy Little and Rove McManus – Aussie household names, known for your comedy. You make jokes, and some are funnier than others. You’re also human, and you make mistakes. Like all of us. But I hope you really learn from this one, because on The Project last night, you went too far.

What you said was a little childish. And unkind. But more importantly, it was dangerous.

Let’s recap what happened: last night on the show, before playing a clip of mining CEO Geoff Summers being interviewed, you mocked his voice. Tommy, you said, “First, I want you to have a look at him, right. Here’s a picture. He’s tough, I reckon he looks rich, he looks mean and he’s a miner; that’s the information we know about.”

And then, as can be seen in the below footage, you both proceeded to laugh about Summers’ voice, asking the audience if they thought it sounded like a man was talking, and whether perhaps he had consumed some helium before he spoke.

You guys are much-loved media identities in this country, and very experienced. You clearly were caught up in a moment of banter with each other. But considering your veteran status, you couldn’t have been surprised by the backlash. Viewers immediately responded to your behaviour on social media, noting that The Project has made much of its anti-bullying stance recently, yet had clearly chosen to ignore their own pleas for kindness and tolerance of people’s differences.

But I’m not here to call you hypocrites. I know a lot about saying the wrong thing, at the wrong time  – about not meaning to sound insensitive, despite insensitive words coming out of my mouth. I’m woman enough to admit that.

But I do need to ask you guys for a favour, because you did plan that segment. You did intend to belittle someone by joking about one of their personal characteristics. You thought it would be funny to question a man’s masculinity because his voice didn’t sound masculine enough according to your standards.

So here’s what I need from you:

Could you please really think of our children who are watching your show?

The kids, like my own 11-year-old son, who adore you, and think you’re hilarious and cool. Because those kids, just like my son, are listening to every word, and watching everything you do, on a show that’s at 6:30pm, during prime family viewing time.

It is hard enough as parents in the age of social media, with so much cyber bullying, to monitor the influences that might effect our kids’ self esteem and perspectives. Please don’t make our job harder by putting notions of masculinity in our kids’ heads. There is no ‘proper ‘way that a man, or a woman, ‘should’ appear or sound – or be.

My 11-year-old is currently desperate for his voice to break, so he can become a man – that’s normal, and natural. That’s biology.

But you know what’s not biology? Our incidence of childhood depression and suicide. Our epidemic of teens and adolescents thinking they’re not good enough; that they’re insufficient in some way.

Our kids are bombarded with messages about what it means to be a man or a woman in this world, constantly. Please don’t add to that noise in their heads. They don’t need that from you.

You don’t want that on your conscience.

And there’s another danger. There have been 34 Australian women violently killed so far in 2018. That is absolute insanity.

How is that related to what you said?

White Ribbon Australia has found that one of the underlying causes of domestic violence in Australia is gender inequality – the perception that the sexes aren’t equal. And, following on from that, outdated stereotypes about what it means to be a man or woman, or a girl or boy, and the roles they should play.

Many of the women who’ve died at the hands of a man this year had left, or rejected, that man. And that man hasn’t been able to cope, because he’s been raised to believe in gendered stereotypes about how things should be; and when that’s been upset, it’s been a trigger for heinous violence.

The media has a responsibility to the next generation to not perpetuate gendered stereotypes. Saving the lives of women starts with the men of the future. Nothing will change unless we challenge outdated and intolerant beliefs.

Which is where you guys, Tommy and Rove, come in. It is imperative that the people with the highest profiles be role models – whether you want to be or not.

Consider this your call to arms. You have a platform to make a real difference – please make it the right difference.

Don't defend a bloody mining CEO getting his feelings hurt, by pulling out stats about domestic violence. Women sufferers of DV are not the shields of thin-skinned billionaire men. Are you about to do some cardio? Because you sure are stretching here to try and make people care.

Tommy regularly makes jokes about people’s weight on his radio show. He recently mocked Mariah Carey for her weight, and constantly jokes about the weight of Buzz on their show. I like Tommy, but he needs to consider the impacts his jokes have.