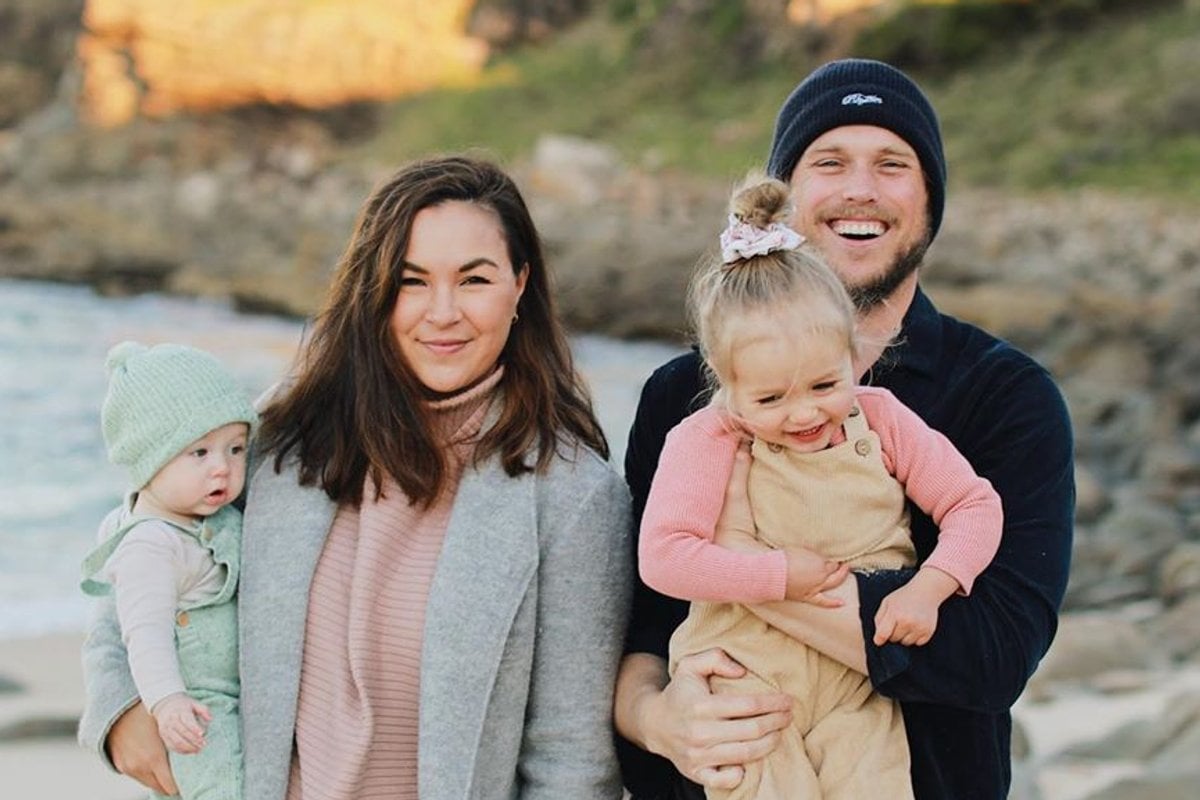 When Gemma Pranita popped up a Q&A box to her 49,000 Instagram followers last week, she didn't expect the fervent questions that flooded in.

The former Neighbours star had just successfully transitioned her two-year-old from nappies to undies and thought she'd check if anyone had any questions about how she found the whole experience.

Yes. Yes they did. Hundreds of them.

WATCH: The Horoscopes as new mums. Post continues after video.

So, she took the time to give an honest, detailed AF account of toilet training now that she has just emerged out the other end.

Of course, every kid is different, but here is a comprehensive list of all the questions Gemma received, answered.

How did you start toilet training?

As Gemma explained on Instagram, she and husband Matthew started with a three day 'plan' of just sucking it up and going absolutely cold turkey.

Chatting to Mamamia, Gemma further explained she treated it as "life before nappies and life after nappies." She thought of it like 'ripping the bandaid off' in one go.

"We hyped up this idea of 'we're going to start toilet training on Friday' type vibe, and we talked about it every day that week," she explained.

She’s turned a corner and turned into an absolute dream this week. I want to freeze this age and stage for just a moment longer. Nearly two and a half with a whole lotta heart. Raffa Roo, we love you! 🏹✨

They did a '30 minute rule' in those first few days, where every time the alarm went off it was time for Raffa to go and sit on the toilet.

"At first this was a novelty and she was quite happy to go. We'd sing songs and I had books in the toilet, but that novelty soon wears off and it becomes a bit more of a negotiation," she told her Instagram followers.

"The thing that got her to sit on the toilet the longest was using the Instagram app where you take a selfie and then draw on your face, blowing bubbles, and the Wiggles on YouTube.

"It was a huge effort. It sucks so bad. But for us it was worth the effort and commitment because it's all behind us now," she said.

Did you do night training and day training in one hit?

Gemma said they had every intention of tackling success during the day before attempting the nights. But Raffa woke up for two straight weeks with dry nappies from day dot.

As she told Mamamia, she made sure she vocalised the plan with Raffa so that there were clear boundaries.

"We'd say 'you're going to wear nappies only at nighttime'. She got that... but she was one of these kids who managed to self night train," she said. 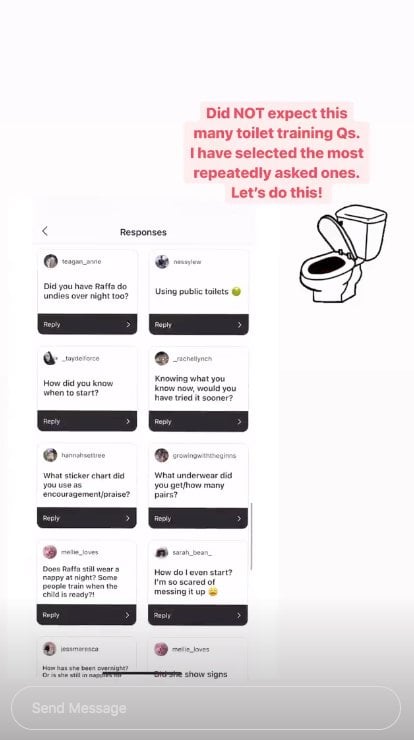 Gemma received hundreds of questions and did her best to answer the top concerns in a very detailed Instagram Q&A.

They had a similar plan in place already with dummies - they were only allowed for naps and nighttime - so Raffa adapted to the plan of attack pretty quickly.

"She did do a poo in the nappy just before bed a few times, but we just kept repeating the statement 'next time you do it in the toilet' over and over again," she explained.

"For us dry nights happened unexpectedly easily," she added.

How did you know your toddler was ready for the toilet?

Two-year-old Raffa had been toilet obsessed for months.

"Any time I would go to the toilet she would come and watch," Gemma told her Instagram. "She would always want to do the flushing... she wanted to talk about poo, play with the toilet paper. She was bodily fluid obsessed."

She also started to 'play toilets,' where she'd jump up and pretend to urinate and wipe herself.

"She'd do all of the theatrics of going to the toilet and I knew she was ready, but I wasn't ready for months so I put it off. In truth I probably could have toilet trained her back in February but I had a newborn," Gemma told Mamamia.

Instead, Gemma says she put it off for six months until her son was a little bit older, and she felt ready to tackle it.

For Gemma, the family being ready was just as important as Raffa being ready.

Did you consider pull-up training before toilet training?

No, and this was because Gemma wanted to minimise confusion from the very start.

"Let's go all or nothing, instead of just dipping a toe," she said.

"I didn't want to strap myself in for months and months of accidents. I wanted to go in for battle... I rallied everyone. I spoke to my husband, daycare and my mum and said 'we're going no nappies and there's no looking back.'"

Did you use a potty or go straight for the toilet?

"She sees me go to the toilet... so she had no interest in a potty or the seat," explained Gemma.

"My girl is a mountain goat, so she can quite easily balance on a toilet seat, so we just rolled with it," she added.

How long did it take to toilet train?

However, the family has just gone on holidays, and now Raffa has regressed slightly because of the new environment and routine.

Gemma read them, but her advice is to "take them with a grain of salt."

She tried to follow a 'three day' schedule that promised to have her kid completely dry day and night in 72 hours.

Gemma thinks the 'textbook style methods' are pretty good at making empty promises that leave you feeling crushed if your kid doesn't fit them.

How many undies did you need to take out with you?

Whatever you think you'll need, double it.

Gemma sent Raffa to daycare with five pairs spare at the start, and she went through every single one.

"So I started packing eight pairs... but gradually she'd need less and less," she told Mamamia.

Four weeks in, Gemma can go out for the day with one spare pair in her handbag and they'll sit in there for four days or so before they're needed.

"Expectation wise... always assume the worst and hope for the best," she said.

What do I need to tell my kid before we venture into the outside world?

This is one of those tips Gemma is keen to pass on, because it wasn't something she'd ever considered.

"Kids who have been in nappies their whole lives don't know there are toilets outside of the home," she explained.

"So I didn't realise when I took Raffa out that I needed to say to her, 'hey, here at the park there are toilets right there, so if you need to do a wee we can go over there.' In her little mind, she thought the only toilet available to her was the one at home," said Gemma.

Now everywhere they go, Gemma physically shows Raffa where the toilet blocks are so she can sight it before they get on with their beach day/park adventures/breakfast.

Is there any language I should avoid while toilet training?

Gemma has learnt that constantly asking "do you need to do a wee wee?" is not the way to go.

Instead, she'll say things like: "You tell Mummy when you need to go to the toilet, okay?"

"It's so easy to just constantly ask and if they're busy playing they don't even hear you asking after a while - they tune you out. So for us it's more about empowering her," she explained.

Does she wipe herself?

For number ones, yes. It's her favourite part.

For number twos, Gemma uses a technique she calls the 'downward dog.'

Raffa has been practising yoga at daycare and "it's the easiest way for me to get access," Gemma told Mamamia.

What undies do you use while toilet training?

Gemma bought 30 pairs of undies in packs from Best & Less and BIG W.

"You'll need them, Raffa went through every single pair," she said. 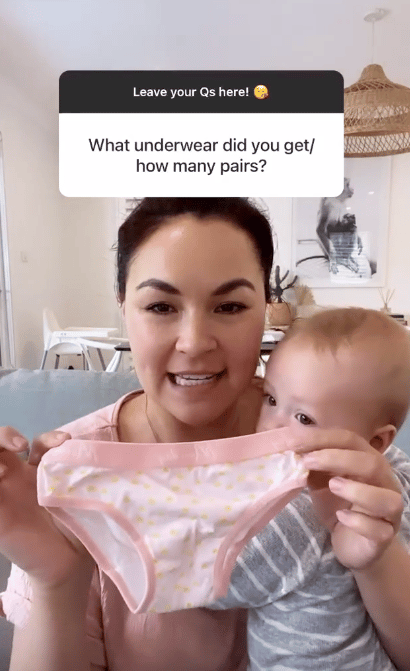 How many accidents should I expect?

Let's just say Gemma was crying by day two and already admitting defeat, but it was all part of the process.

"I am talking like eight puddles, and three poos on the floor a day," she told Mamamia.

"Just know that every accident is progress," she said. "They have to have the accidents because a nappy is so quick absorbing they don't feel any wetness. They need to learn how to feel the wetness and the discomfort. It's an important part of the learning."

"And when your child does a wee or a poo in the toilet the celebration needs to be ten million per cent," she added.

How did you deal with your toddler's 'fear' of pooing?

While weeing is relatively easy to get the hang of, pooing can be an overwhelming activity for a toddler.

"They feel quite vulnerable opening up their bowels for the first time without the safety net of a nappy," said Gemma. "So for me one of the biggest things was to not create any shame."

She'd been warned by other parents on her Instagram that pretty soon Raffa would beg for a nappy, and sure enough on day three of toilet training Raffa asked: "Mummy give me a nappy give me a nappy?"

Gemma stood her ground and refused the request, which she felt horrible about at the time, but it allowed her to progress so much quicker.

She'd heard about the importance of her daughter experiencing the 'poo drop,' which she explained on Instagram: "They have to feel a poo coming away, rather than a poo pancaking in a nappy. They call it the 'drop.' It's part of the process."

It took a week for Raffa to do a poo on the toilet, and while it wasn't exactly fun to have her daughter using the ground instead, Gemma is glad she put herself through the short-term pain for the long-term gain of her little girl learning the skill.

Did you use bribery?

"It needed to feel like a game to get her to play," said Gemma.

Doing a poo took the most bribing, and Gemma had a special elephant cookie that Raffa knew she would get to eat once she successfully used the toilet for pooing.

Any last words of encouragement for parents starting to toilet train?

"It's a sh*tshow, so don't expect anything otherwise," said Gemma

"The best thing you can do is literally schedule it into your calender and mentally gear up for it. I don't think I could have half-stepped into the world of toilet training," she said.

When people asked her what she was up to that weekend, Gemma would literally reply "toilet training."

It was the only plan, and that helped her and her husband power through it.

"It's sh*t, and really boring and a tedious part of parenting. I don't know anyone who is like 'oh I loved toilet training.' But it's got to happen, and your child will surprise you," she said.

You can find Gemma's full Instagram Q&A on her highlights reel.

How did your kid adapt to toilet training? Add your comments below.