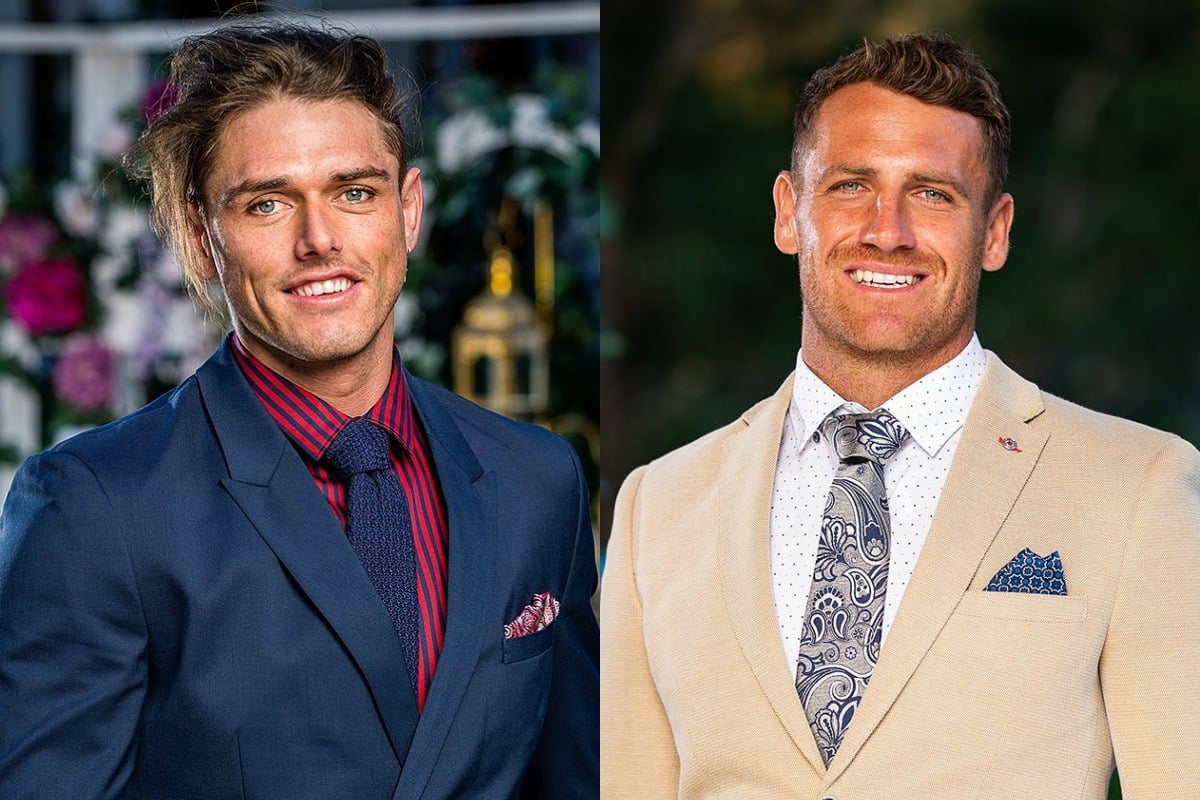 1. Apparently, Bachelorette Timm ‘trained’ winner Frazer before he went on the show, and we feel awkward.

In today's steaming cup of Bachie tea, it seems Bachelorette winner Frazer Neate was given some hot tips from Timm Hanly before going on The Bachelorette.

During an interview on the So Dramatic! podcast, Shyanne Mirabelli - who says she dated Frazer before the show - claimed Frazer only went on The Bachelorette to "gain popularity" and "start his concreting business".

According to Shyanne, Frazer said, "I’m not going on to find love, it’s just an experience".

"He’d never watched an episode… he only knew about the perks. He knew Timm and what his life was like," she told host Megan Pustetto.

"Timm said, ‘Bro, you’re going to make it so big, you need to get with this agent’."

Megan then asked if Timm had been coaching Frazer before the show and teaching him how to suck up to producers.

"I do know that Timm told him that it’s a game and that you need to get in the good books with the producers and do what they want you to do," replied Shyanne.

"Timm did definitely give him pointers. Timm was apparently calling him two-three times a day saying block this journo, block this pap. I’ll get you in some Front Runner, we’ll help each other out."

Understandably, former Bachelorette Angie Kent had some feelings about the claims and left a comment on the So Dramatic! Instagram page.

"It’s been over a year to still have to read rumours and see this dross. I had nothing but love for homeboy. If this is the truth why does he have to feel the need to keep bringing up our experiences and full know this would hurt anyone’s feelings," she wrote.

"Matters of the heart are tough, hey. Just don’t get what blokes get out of saying stuff like this… put it to bed and know your words and actions can hurt people. If he didn’t say it, can we stop with the rumour mill? Makes my trust in men so gloomy and non-existent haha." 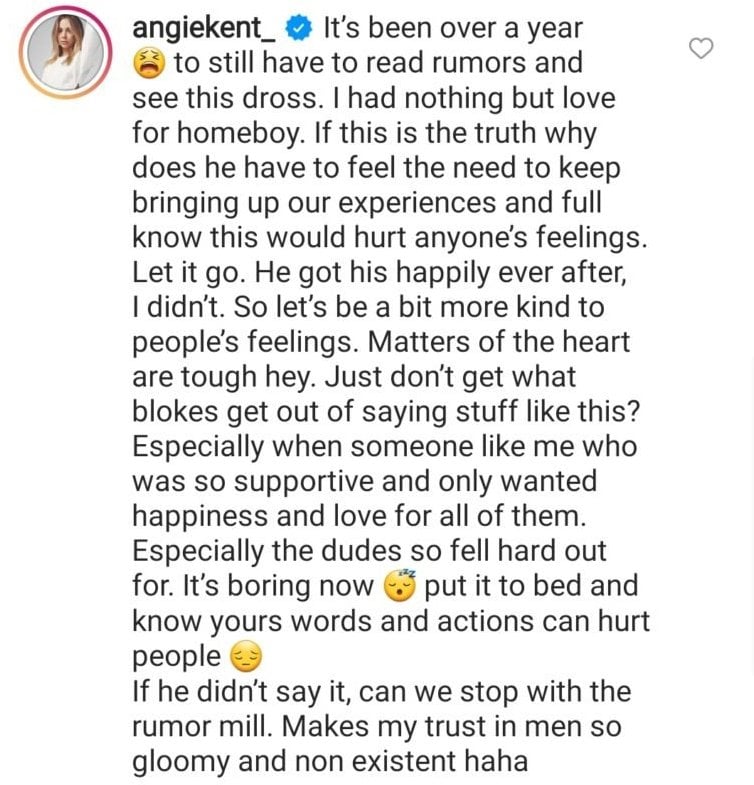 Listen to The Spill, Mamamia's daily entertainment podcast. In this episode, co-hosts Kee Reece and Laura Brodnik chat about the 2021 Grammy nominations and why it's reignited the conversation surrounding the lack of race diversity in the award line-ups. Post continues below.

2. So, a whole heap of celebrities are keen to take part in the next SAS Australia, and did they watch the show?!

The first season of SAS Australia has only just finished, but it seems a bunch of celebs are already putting their hand up for the next season.

"We have been inundated with Aussie celebs wanting to take part and there are some good surprises on the shortlist," a Channel Seven spokesperson told news.com.au.

The spokesperson explained that producers are already going through the casting process for next season, which is expected to air in the second half of 2021.

"Names will be locked off sooner than later as people need to train hard to be ready for this course," they said.

"Once cast, they are given a training program. Ideally they need at least three months to get SAS 'fit' in a physical sense, but getting into the right mindset is up to the individual."

Just over a week ago, Bachelor alumni Tim Robards and Anna Heinrich announced to the world that they had welcomed their first child, Elle.

Now, Robards has taken to social media this week to answer some questions about life, work and his family. And of course, the majority of questions were about his newborn daughter.

"She's been a great little baby though, we're pretty lucky," Robards told his followers on Wednesday.

During the Q+A, followers asked various questions about parenthood, including how the couple balancing parenting duties.

"As a guy it's hard to help with feeding when she's on the breast, but I help where I can other times," he said.

"And the best part about it is I get to wake up to this little face every day," he added.

The 38-year-old then revealed how he and Anna decided on the name Elle.

"So we were going through the alphabet and we got to 'M' and I said, 'Wait a minute can we just go back one?'" he joked.

According to sources over at HELLO!, Princess Eugenie and Jack Brooksbank are moving into Prince Harry and Meghan Markle's former home, Frogmore Cottage.

The couple who recently announced their pregnancy, are supposedly looking to settle down in the countryside to raise their family.

"They are delighted to be able to open up their home to Princess Eugenie and Jack as they start their own family," the source revealed.

The publication also noted that there were removal vans spotted at Windsor Castle. However, nothing has been confirmed that it was for Princess Eugenie and Jack Brooksbank.

The couple is expecting their first child in early 2021.

5. Secret love with a co-star and a whirlwind marriage: The life and career of Kaley Cuoco.

A year on from saying goodbye to her The Big Bang Theory character Penny, Kaley Cuoco is starring in a series that could not be more different.

In The Flight Attendant, which hits streaming service Binge in Australia on Thursday, Cuoco plays an international flight attendant with a drinking problem who wakes up next to the brutally murdered body of a man she'd spent the night with.

Yeah, there are no science jokes here.

In promoting The Flight Attendant, Cuoco has unsurprisingly been unable to avoid questions about Big Bang - not that she even wants to.

"Every job I get, I owe to Big Bang," Cuoco told news.com.au. I feel strongly that way because it changed my life. I wouldn't be here without it, so it would be crazy for me to shy away from it.

"I'm so proud of that show and what we did."

The Big Bang Theory ran for 12 years and made Cuoco one of the highest paid TV stars in the world, but the 34-year-old's career begun more than a decade earlier.

In fact, her first acting credit was in 1992 thriller Quicksand: No Escape, which was released when she was just six. Other early roles included a young Angela Chase in My So-Called Life and young Ellen in Ellen DeGeneres' sitcom Ellen.

In 2002, aged 16, Cuoco began starring as Bridget in 8 Simple Rules, alongside John Ritter and Katey Sagal.

She told Cosmopolitan in 2014 she underwent a breast augmentation in 2004 aged 18, saying it was the "best decision" she ever made.

"I had no boobs," she explained to the magazine. "And it really was the best thing ever. I always felt ill-proportioned. My implants made me feel more confident in my body."

For more on Kaley Cuoco's life and career, read our earlier article here.