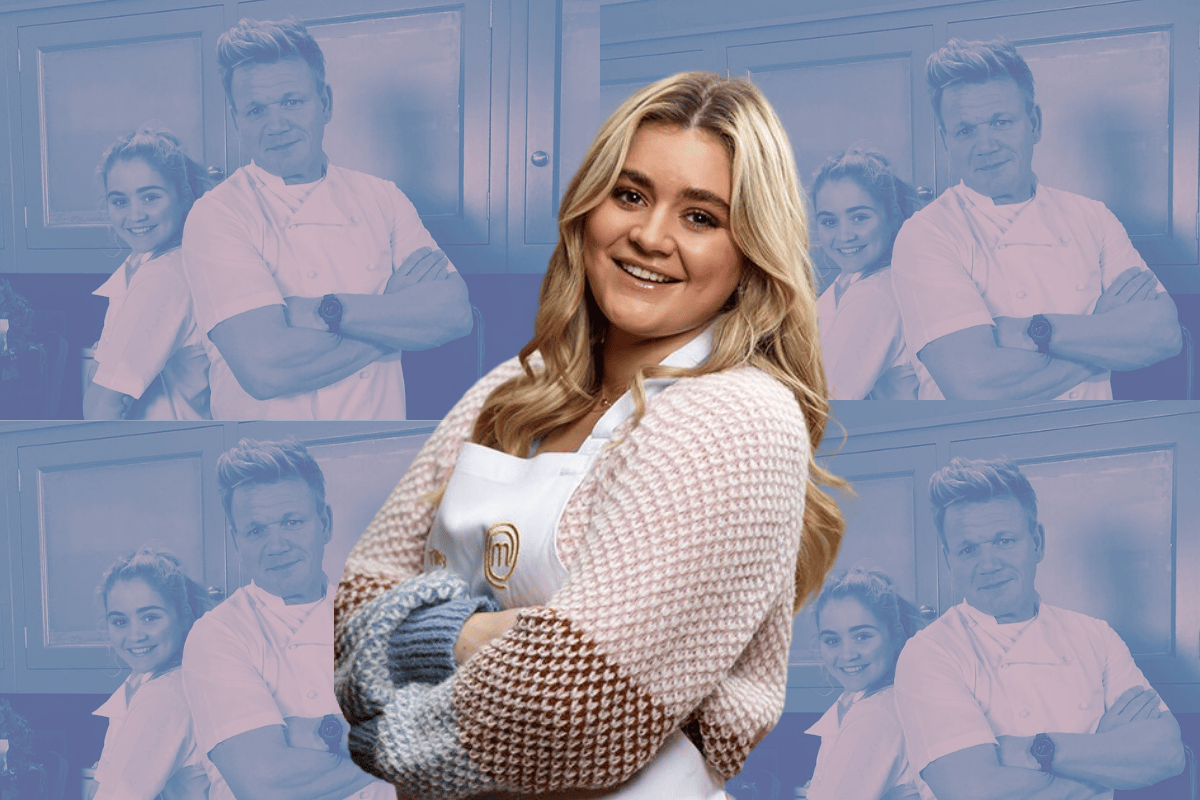 Her dad is arguably the most famous chef in the world, notoriously known for his expletive-ridden comments on cooking shows such as Hells Kitchen, Hotel Hell, Kitchen Nightmares and his judging appearances on the various MasterChef franchises. Not to mention his 30 restaurant ventures across the globe.

But it’s not Gordon Ramsay that is trending as of late. It’s his daughter, Tilly Ramsay.

The 19-year-old is following in her father’s footsteps and creating a major profile for herself, showcasing her own cooking talents and easy-going nature.

More recently, Tilly has been gracing our screens on Celebrity MasterChef Australia, with Aussie icons such as Rebecca Gibney, Dami Im, Patrick from Offspring and Chrissie Swan.

But before we watch Tilly cook some killer dishes, here’s a look at her rise to fame and what it’s been like growing up with the formidable Gordon Ramsay: including a revelation from Gordon that the Beckham boys are off-limits.

Watch: Things I say while watching MasterChef. Post continues below.

Gordon and Tana Ramsay married in 1996 and have been together since. They have five children together: Megan aged 23, Holly and Jack aged 21, Matilda aged 19 and their youngest Oscar, who just turned two.

Born in November 2001, Matilda “Tilly” Ramsay grew up in London, often splitting her time between the UK and Los Angeles for her dad’s television career.

According to her parents, Tilly was keen on cooking from a young age and has shown a liking to it ever since.

She seems to really be the only kid in the bunch that has shown a liking to television, with her public profile far bigger than her siblings.

Megan has recently graduated from university with a degree in philosophy from Oxford Brookes University.

Holly is a model and aspiring fashion designer who also hosts her own podcast.

Jack studied at Exeter University and has plans to pursue a career in the Royal Marines.

With a famous father, it’s no surprise that Tilly herself has grown up in contact with some of the world’s most well-known celebrities.

Take the Beckhams for example. The two families have been close since Gordon catered the Beckham’s pre-World Cup party in 2006. But Gordon made his daughters promise not to date any of the Beckham boys.

“Three girls and a boy, and three boys and a girl: we’ve promised that no one dates anybody. If Tilly said, ‘yeah Brooklyn and I…’ it would be, ‘no Tilly,’” he said to The Sun. 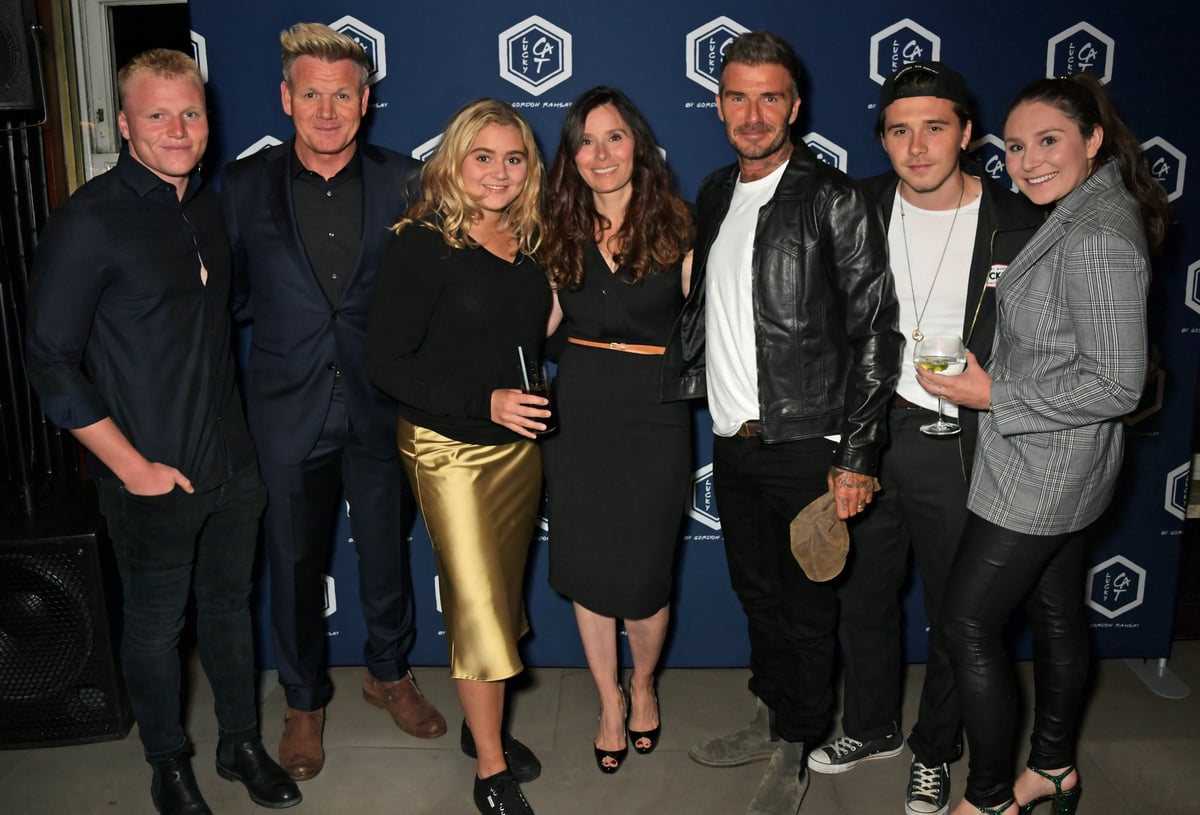 Documenting their close relationship via funny TikToks, it’s fair to say that Tilly and her father are two peas in a pod.

In an interview with The Irish Sun, Tilly confessed that she’s a “daddy's girl,” and Gordon is “hard on the outside but soft on the inside.”

If pranking one another and doing viral TikTok dances are what binds them together: it’s a fabulous combination.

During an interview with the Daily Mail, the journalist talking with Tilly and Gordon wrote about a moment between the two.

Gordon asked his daughter, “what's it like being the daughter of the best chef in the world?”

Tilly turned around and said, “Jamie Oliver’s not my Dad!” Now that’s a burn.

Gordon’s own jokester nature has got him into trouble in the past, including at Tilly’s school.

In an interview with Vegas Magazine, Gordon revealed that he wasn’t exactly a hit at his kids’ school.

“I failed at turning up for a parents evening at my kids’ school. And then when I went to the next one with my youngest, Tilly, I asked the headmaster for a selfie, after which I got kicked out.”

“The following day I received an email saying: ‘can you please refrain from the next parents evening – we do not need the presence of Mr Ramsay.’ I really f***ed that one up!”

One thing that Gordon doesn’t joke about however is inheritance, with him and Tana expecting each of their kids to make something of themselves without any trust funds.

Tilly has done a number of television appearances with her father on shows such as Hells Kitchen and Junior MasterChef.

The duo have also done some late-night talk show skits, including one particularly funny cook-off on The Late Late Show with James Corden.

Even in her early teens, Tilly was the star of the BBC kids cooking show, Matilda and the Ramsay Bunch.

The show ran from 2015 to 2018, with a number of pretty successful seasons, and followed the family on their summer holidays. It was also a hit with Aussies, airing on the ABC Me children’s channel. 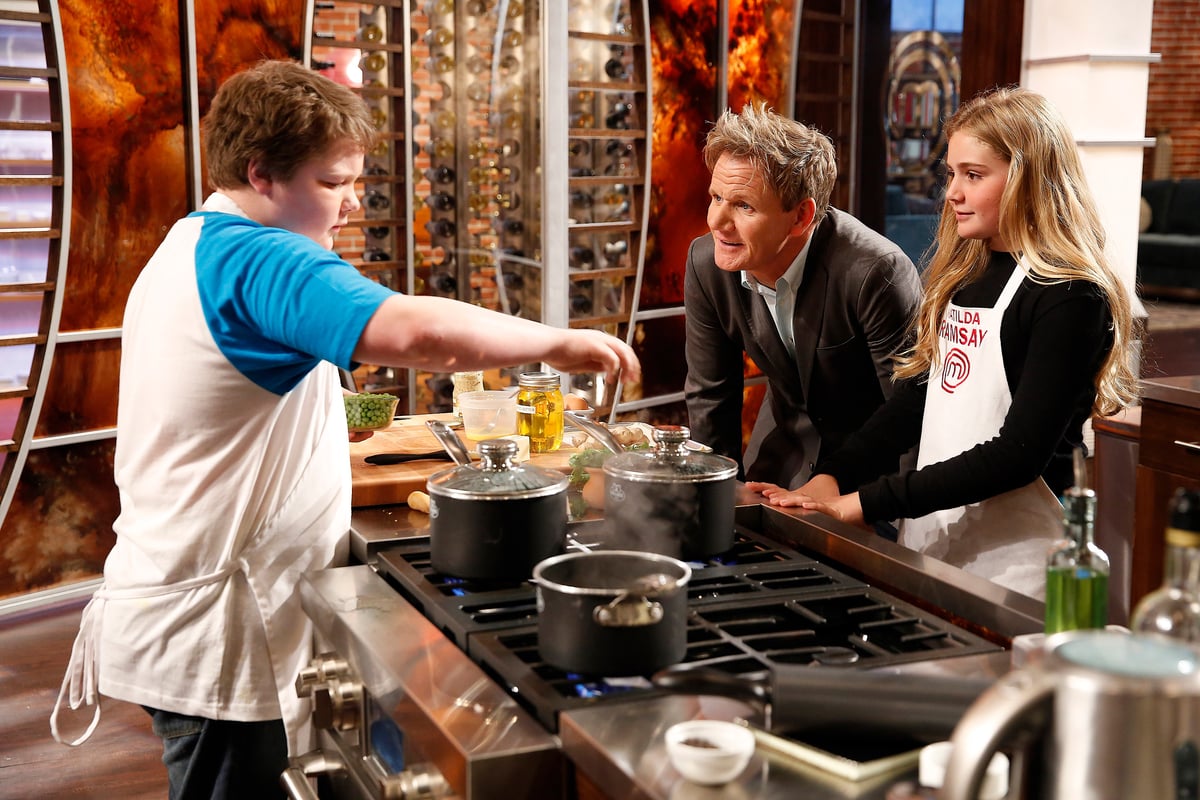 Image: Getty Currently, Tilly is starring on the hugely popular show Strictly Come Dancing, which is the UK’s answer to Australia’s Dancing with the Stars.

“The moment I got the call I was going to be on this show, I was so excited: I couldn’t believe it. I think my dad was possibly more excited than me, if that was possible,” she said during a press event.

And of course, Tilly has her dad to thank for her dance moves…

“So proud of you Tills, love you from your dance coach extraordinaire Dad,” he wrote on his Instagram.

She’s also been making headlines with her dance partner, Nikita Kuzmin, with some fans suggesting the pair are dating.

Yet as every celebrity that has come before her, often having to clarify relationship rumours, Tilly has noted she is single and not romantically seeing her dance partner.

“We really are just good friends and dance partners,” she said to Hello Magazine.

Tilly isn’t just interested in a career in television however. The 19-year-old has recently finished school and is currently taking a gap year, starting university in 2022.

When her GSCE results came out in 2018, Gordon celebrated the impressive results on his socials, showing a snapshot of her report card with a string of A’s. Yet Gordon took it upon himself to give her a D in home cooking: something we now know not to be true. 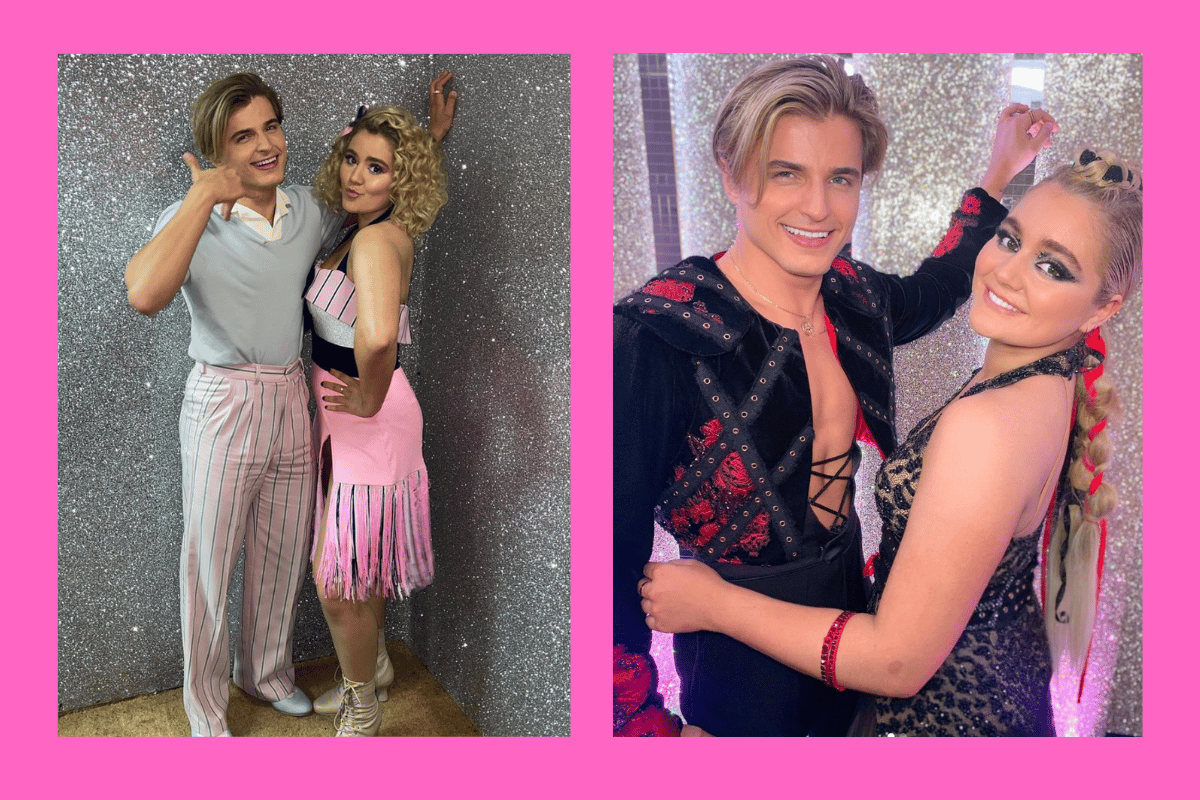 Celebrity MasterChef Australia is currently on screens, and according to Channel 10's socials, audiences have most definitely fallen in love with Tilly.

The show sees 10 celebs put their cooking skills to the test and battle it out for the MasterChef title.

Given Tilly’s previous experience on Junior MasterChef with her dad, it makes sense why Tilly is vying for the win.

“My cooking passion actually came from both my parents: surprise, surprise!”

Tana herself is pretty successful in the food industry, with a few great cookbooks to her name. Tilly has actually come out and said she prefers her mum’s cooking in some of her TikToks – videos that also show Gordon’s not-so-impressed reaction.

Mum Tana says her daughter is as cool as a cucumber in a recent interview with Hello Magazine. Indeed the polar opposite to Gordon who loves an f-bomb or 50.

“Interestingly, actually the calmest, most easy-going and organised in the kitchen is Tilly, so I'm hoping she'll do Christmas lunch.”

Tilly is also hoping that her “calm nature” would be her biggest strength in the MasterChef kitchen. And so far, it definitely has been.

Just this week, Tilly was able to smash one of the cooking challenges, with her restaurant-quality dish setting the bar high: pan seared scallops with a sweet and sour beetroot and a creamy velouté.

Judge Andy Allen was all praises, saying: “Tilly I reckon your old man would be very proud. The presentation is something I have to give you props on because it was really simple, just beautiful.”

“I mean in terms of calibre, it’s a dish that belies your years and then some.”

What’s for sure is that we can’t wait to see what Tilly does next.

Reply
Upvote
Matilda (Tilly) Ramsay has grown up to being a beautiful, talented young adult. Having watched her on "Matilda and the Ramsay Bunch" for 3 years, I learnt a lot about how to be imaginative with cooking, plus learning a great deal of skills that Tilly shared over the 3 year series. One of the best aspects of her show was watching the family interact, as it wasn't rehearsed staged goodness, it was simply a family with a strong loving bond, encouraging their youngest (at the time) sibling to follow one of her goals. Tilly is full of personality but in a sweet adoring way. She is mature, grounded, intelligent, creative, hilarious, good natured + filled with love for her family. Watching her on Aussie MasterChef + I'm hoping she takes home the trophy. It's great that her dad, Gordon, can treat her in a variety of ways-his signature tv personality of expecting high standards to the polar opposite spectrum where Gordon's heart is filled with pride, love, hope + joy as he watches her compete. Gifted, Tilly certainly is. Good luck Tilly, I hope we see you in the Grand Final.
News
General
Opinion
True Crime
Politics
Sport
Explainer
Entertainment
Celebrity
Reality TV
Movies
TV
Books
Rogue
Royal
Lifestyle
Beauty
Fashion
Weddings
Home
Wellness
Health
Fitness
Travel
Food
Parents
Before The Bump
Pregnancy
Baby
Kids
Teens
School
Parent Opinion
Work & Money
Money
Finance
Career
Lady Startup
Relationships
Sex
Dating
Separation
Friendship
Family
Real Life
Couples