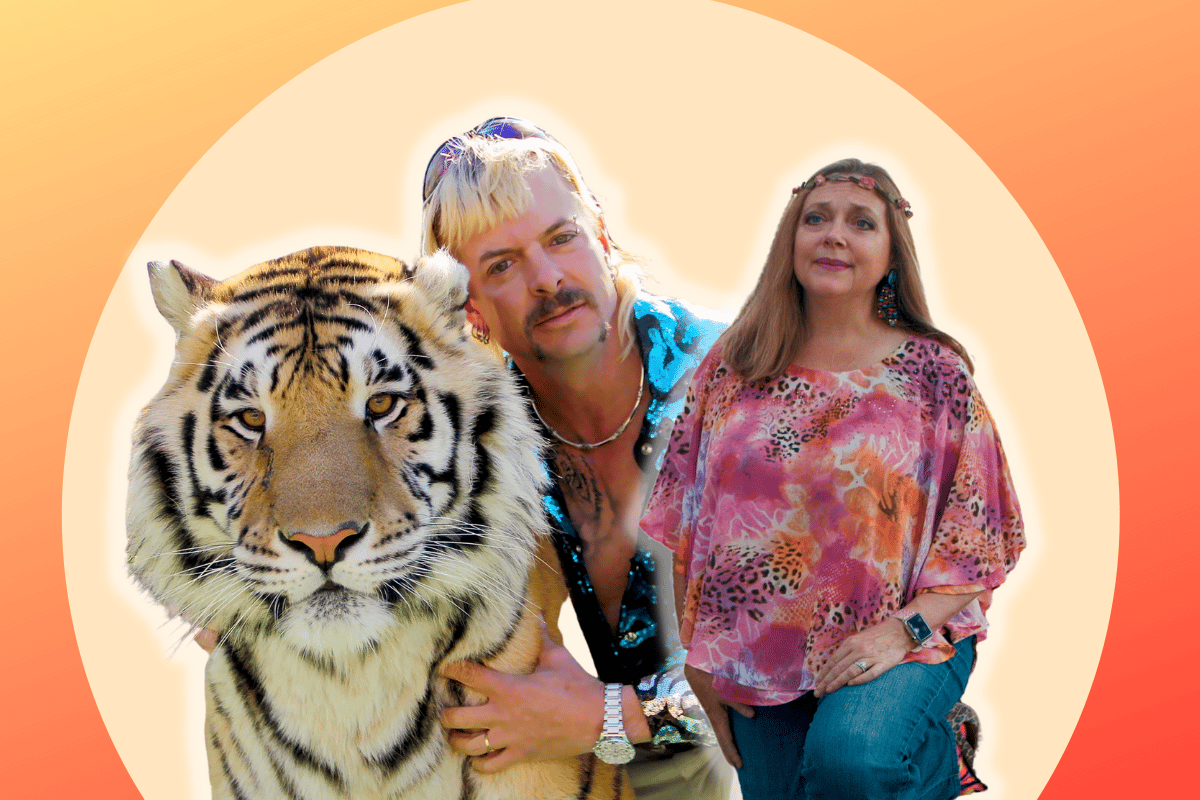 Tiger King: Murder, Mayhem and Madness was one of the first shows to benefit from a big population of the planet being locked down. A welcome distraction from the sheer horror of the COVID-19 pandemic, it quickly became one of the most talked about documentaries in 2020.

Now, season two has been released, and it's looking very chaotic.

Here's everything you need to know before you watch the second season of Tiger King.

What happened in Tiger King season 1?

Look, a LOT of mayhem was squeezed into the first seven episodes of this docuseries.

Tiger King followed the lives of "gay, gun-toting cowboy with a mullet" Joe Exotic and his arch-nemesis Carole Baskin - along with about 200 other undeniably bizarre characters, as they explore the world of big cat ownership in the U.S.

And it's no secret that the care of these animals leaves a lot to be desired - and not just for the 'big cats', but the elephants, chimps, monkeys and snakes as well.

But what viewers stuck around for with Tiger King was the rather cooked dynamic between Joe Exotic, a former Oklahoma zoo-keeper (who sold his 'animal sanctuary' to Jeff Lowe in 2016 after financial troubles) and Carole Baskin, who is a self-described animal lover and owner of Big Cat Rescue.

During the season, Joe was accused of plotting to murder Carole, as she had not only been airing out his alarming practices at his Oklahoma zoo, but was also actively campaigning to have commercial cub petting banned throughout the United States.

The drama came to a boiling point though when Mr. Joe Exotic pulled the ye olde whodunit first by pointing a finger at Carole and accusing her of murdering her husband, Don Lewis - who has been missing since 1997.

While Joe never offered any evidence, and police have never considered her a suspect - the claim has still rippled through pop culture. In result a catchy, but very defamatory dubstep remix has gone viral, along with countless memes.

Quick! Have a listen to today's episode of The Spill - Mamamia's pop culture podcast. Post continues after audio.

Next, is Jeff Lowe and his wife Lauren, who invested into Joe's zoo. However, things became a bit sus when there was a dubious fire on the premises and Joe was unable to recover from the financial loss.

Joe and Jeff had a major falling out, the ownership of the Greater Wynnewood Exotic Animal Park fell solely into the hands of Jeff after Joe retired, and the park was renamed to "Tiger King Park".

Eventually, Carole was awarded ownership of the zoo in 2020.

Amidst all the chaos though, love was found for Joe, who actually had two partners over the course of the season. At first, viewers got to see John Finlay who underwent many interviews for Tiger King and had a lot of involvement in the documentary. But by the time the season had wrapped up, Joe announced he was married again to 22-year-old Dillon Passage.

It may come as a surprise, but the pair ended their relationship near the beginning of 2021.

What have the characters been up to in the meantime?

Currently, Joe is incarcerated at Federal Medical Center Fort Worth in Texas - and it appears like he's going to be stuck there for a very long time.

He's currently serving a 22-year sentence for two counts of murder-for-hire (against Carole Baskin), eight violations of the Lacey Act and nine violations of the Endangered Species Act. From prison, Joe has managed to stay relatively active on social media and in November, he told the world he has prostate cancer.

"What I need is the world to be my voice to be released," he wrote. "They have the proof I did not do this and there is no reason for the U.S. attorney to drag this out so I can go home and get treatment on my own or enjoy what life I have left with my loved ones."

Jeff is back for Season 2 of Tiger King, but both his fortune and his zoo won't be joining him. The Justice Department seized all their captive wildlife in a series of raids between May and August 2021. Reports say the U.S. Department of Agriculture inspectors saw evidence of neglect and unsanitary conditions.

He also lost the Greater Wynnewood Exotic Animal Park to Carole, and despite his attempts to start up a new complex, he has failed to do so.

Carole Baskin and her husband Howard sued Netflix over Tiger King 2. The pair asked a judge to block the major streaming service from using any footage depicting them, but were denied.

According to Netflix and the production company Royal Goode Productions, Carole signed agreements in 2019 which "explicitly permit defendants to use the footage in later projects".

She told court she felt deceived and betrayed by how she was portrayed in the first season of the show, but has been able to remain in the public eye with her recent appearance on the US version of Dancing With The Stars, and her new series on Discovery+: Carole Baskin's Cage Fight.

The docuseries explores her side of the story, her mission to ban cub handling, and phase out private possession of big cats.

As for season two of Tiger King, Carole told news outlets she and her husband have categorically denied requests to be part of it.

Speaking to The Guardian, she aired the grievances she has with her portrayal.

"At the end of it, I just sat there with my husband, looking at each other, like: ‘What was that?’ Such a missed opportunity," she said. "Because there was so much they could have shown people about the egregious abuse that these animals suffer. Instead, they just glamorised this yahoo in Oklahoma and tried to create a feud. I’ve never even spoken to Joe Exotic. I’ve seen him in person I think four times."

Tiger King 2 is available to watch now on Netflix.