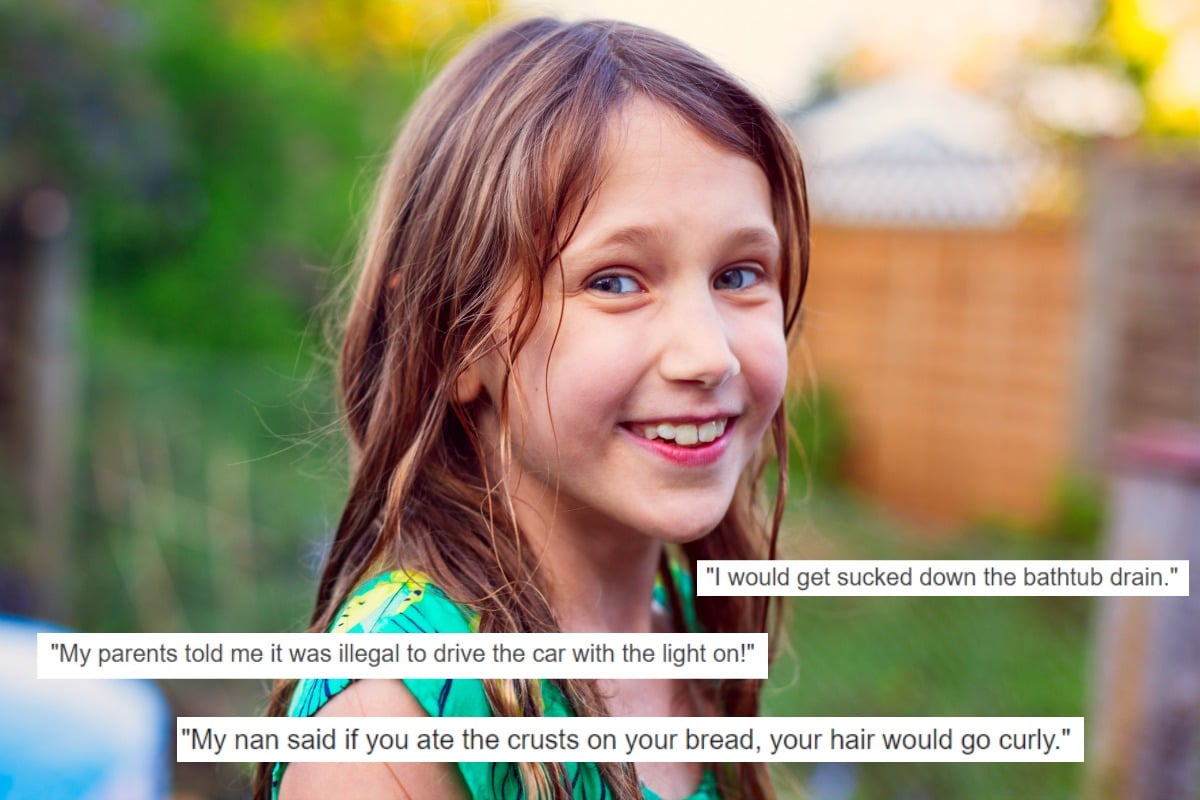 As kids, we spend a good chuck of our childhood believing things that aren't true.

Whether it was something an older sibling made up, a white lie our parents told us to stop us misbehaving, or just something completely bizarre we convinced ourselves was fact.

As a child, I grew up thinking (for way too many years) that the 'olden days' was an actual time period where everything was coloured black and white because that's what you saw in old photos. And to my young misguided brain, that made a hell of a lot of sense.

So, to make ourselves (and me) feel better about our strange childhood thoughts, I asked the Mamamia community to share the most ridiculous things they thought were true when they were kids.

"My nanny used to tell me swallowing watermelon seeds or mandarin seeds would make them grow out of your ears."

"I just assumed that when you were driving, the car knew where we were going and turned on the indicators accordingly."

"I used to think I would get sucked down the bathtub drain if I didn't get out of the bath quick enough as a kid."

"My dad used to tell us if we all leaned forward it would help the car get up the hill."

"If you are not asleep before midnight the boogeyman will take you away, and if you walk around bare-footed worms will climb into the soles of your feet."

"Not to pull silly faces because the wind would change and your face would stay like that!"

"My nan said if you ate the crusts on your bread, your hair would go curly."

"When the ice cream truck song is on, it means they've run out of ice cream."

"I thought that we were human beans not human beings. Also, when I'd get goosebumps, Nan would say someone was walking over my grave - that always weirded me out."

"I thought there were babies in the little capsule part of the traffic light and the babies randomly pressed the lights for the light change. Very weird! I mean, those poor babies!"

"The dark patches in the ocean (cloud shadows it turns out) were mermaids having a wedding party. I’d like to think that was still true."

"My older step sister told me that the foamy stuff on water's edge on the beach that sometimes washes in was whale sperm."

"I thought that whatever way I was facing was north. When we were learning to use a compass at school, we put them on our tummies and turned around until they faced north and my take away from that lesson was that you turned in a circle and then your tummy button pointed north. It wasn’t until I was selected to be on the orienteering team at age 12 that my team mates corrected me. I wasn’t allowed to read the maps though."

"That Christmas elves were ALWAYS watching, any time of the year, and that getting coal for being bad was a real possibility if you did something bad and reported it back to Santa."

"Every time I rubbed my eyes my nana said I would go blind."

"I thought that if you swallowed fruit seeds, a tree would grow inside of you and ultimately kill you."

"My mum told me that you couldn't shower for two hours after eating or you would vomit. This stayed with me until I told someone not to shower after dinner at uni and they couldn't stop laughing... thanks mum."

"I used to think if I sat too close to the TV or watched too much TV, I would get square eyes."

"My parents told me it was illegal to drive the car with the light on? I thought this was true for the longest time, even after I got my P's."

"That you'll drown if you swim straight after eating."

"I’m the youngest of four and my siblings always told me that if they were in the car, then it was illegal for me to sit in the front. It may be the case now but it certainly wasn’t then. If anything, I would have reached a certain age where it didn’t matter... I believed them until I was 18. My brother offered me the front seat one day, and I said 'no you have to take it' and he was like WHAT are you talking about?"

"My uncle had told me that you get bruises on your legs when you drink Coca-Cola and I remember pleading with him that I hadn’t had any so I couldn’t work out how I kept getting them."

"My parents used to tell me the man was here to turn the water off to make me get out of the shower when I was like six."

"My dad told me he could bite his beard hairs out from the inside!"

"When I was little, I found black and white movies really confusing and thought maybe things didn’t have colour - how else could you not see the colour."

"My family had a campaign going throughout my entire childhood to convince me drop bears were real. Dad told me they live in those beehive-looking pods high up in the trees. On my first camp in the bush with other kids, I was absolutely terrified one was going to attack me from above. Still believe it a little bit TBH."

"That it was bad to cross the road unless you are at the lights. Which I get, but I took everything so literally as a kid and had a full-blown meltdown after my friend made me jaywalk only to be told it's fine. From then on I didn't believe anyyythinggggg."

What was the weirdest thing you believed as a kid? Let us know in the comments below.

Reply
Upvote
Emily's nan isn't wrong about rubbing eyes and going blind.. Well, to some extent anyway. If you rub your eyes too often or too hard and too excessively you can damage your corneas resulting in astigmatism. It is the one thing people who already have astigmatism are told not to do.. Don't rub your eyes excessively and keep allergies that cause itchy eyes in check!
J
james b 2 years ago