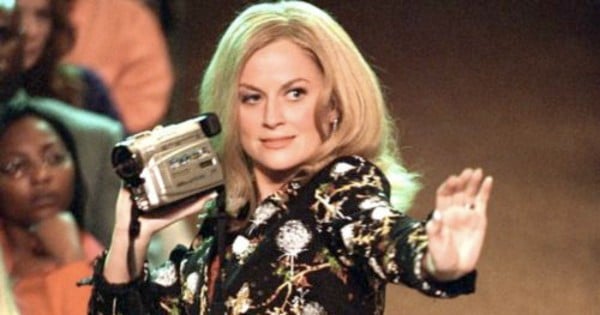 Thanks to our brand partner, Triple P – Funded by the Qld Government

Out of the compliance of babyhood, my kids launched themselves into the terrible twos and treacherous threes with wild abandon. As a confident career woman used to negotiating my way towards a desired outcome, I was surprised to find that I was completely ill-equipped to deal with my children’s new-found selective hearing and stubbornness.

Despite my best intentions, I often catch myself saying things that not only remind me of my parents but prove to be completely ineffective as I navigate the minefield of disciplining my kids.

Tried to be a cool mum, but I will just stick to being a regular mum. Image: Paramount Pictures.

What I mean: Do not pass go, do not collect your favourite toys along the way. Mum needs five minutes to swig some wine directly out of the bottle while questioning her decision to procreate.

What I say: “Do not make me come over there.”

What I mean: Mum is watching Masterchef and it’s another three minutes until the next ad break. If I have to get off the couch and rescue your baby brother from the headlock you’ve got him in I might miss the mystery box reveal.

What I mean: There is zero chance in hell that I am taking you to the park in the middle of a torrential downpour and I’m really hoping you will forget that you asked.

What I say: “Go ask your Dad.”
What I mean: Mum has had a gutful of being bad cop today so Dad will have to explain why you can’t eat lipstick/poo on the grass/go to kinder naked.

What I mean: Dad has completely failed in his role as bad cop and you absolutely may not eat lipstick/poo on the grass/go to kinder naked.

What I mean: Those doe eyes and dimply cheeks may work their magic on Nanna but they do not equal chocolate for breakfast at home.

What I mean: I have no idea what I mean anymore but I figure that if I say this with my stern voice, you might realise that I am about three tantrums away from booking myself into an adults only ashram.

What I mean: I’m surviving on four hours sleep thanks to your brothers recent bout of gastro and I can’t summon the energy to explain why we can’t go to the zoo at 7pm on a Monday night.

Just do as I say not as I do. Image: Universal Pictures.

What I say: “What’s the magic word?”
What I mean: You might fail to say “please” and “thank you” but I’m going to give you what you want anyway because it’s easier than dealing with one of your epic 45-minute eardrum-bursting meltdowns.

What I mean: I realise that you have perfected the art of selective hearing but I’m starting to seriously loathe the sound of my own voice so for the love of all that is humane, please listen to me!

What I say: “If you listen to Mum, you can have a treat.”

What I mean: I have exhausted every other method of trying to get you to follow my instructions and have failed miserably. A jelly bean is the only thing I have left in my disciplinary arsenal.

What I mean: Hell no.

Most of the time I am winging my way through this tough gig called parenthood. I constantly fear that I am raising little delinquents but I know I am not alone.

What are some things as a parent you find yourself saying?

So true! I laughed my way through the entire article.