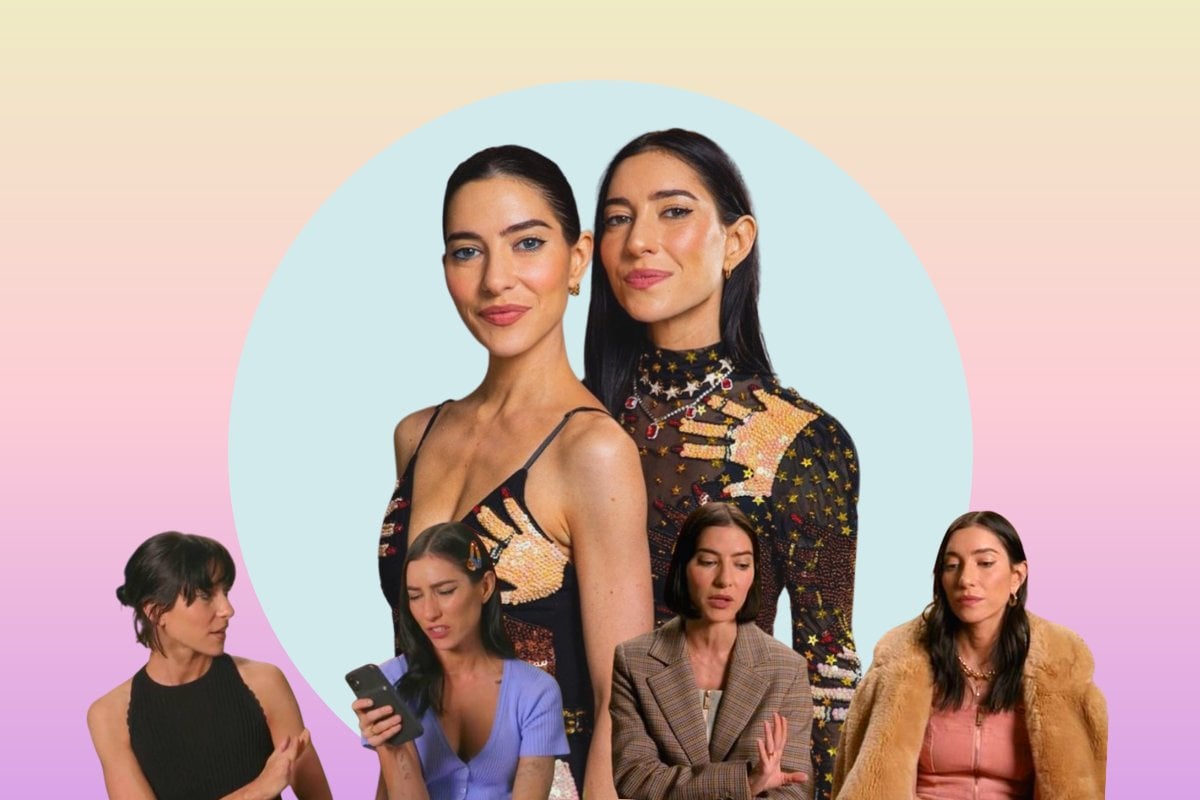 For The Veronicas, competing on The Celebrity Apprentice Australia is personal.

The musical duo and real life twins, 36, are playing to win money for The Brain Foundation, because their mother Colleen has progressive supranuclear palsy. The rare neurological condition causes the gradual deterioration of parts of the brain, and Colleen is now in palliative care.

But watching the series back, the sisters are unhappy with the show's depiction of them and its focus on "scripted drama". And they're not afraid to say so.

Watch: The Veronicas argue on The Celebrity Apprentice Australia. Post continues below video.

Jess and Lisa Origliasso have shared an open letter addressed to the reality show's crew and production team, accusing them of "gut-wrenching, soul-destroying" treatment.

"You signed us up for your show under the guise of charity and heart," the letter stated.

"Our genuine intentions and passion [have been] reduced to an edit portraying us strong-arming other team members, and outwardly using our mother's condition for sympathy and manipulative tactics is disgusting."

The women accused the show of weaponising their words, "turning them into a knife used to stab us in the heart".

They said it was "gut-wrenching, soul-destroying and the lowest thing you could ever do to us as women, daughters and carers." 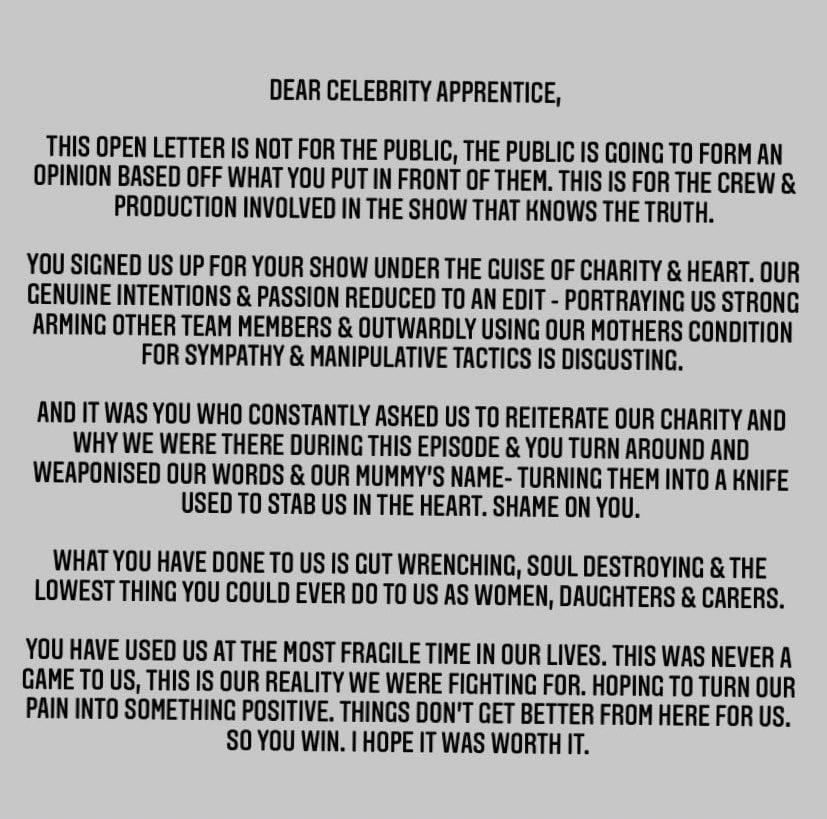 They also shared a number of critical tweets while Tuesday's episode aired, expressing their anger at the edit.

"We signed on after they stressed and emphasised it would be a show with heart," they wrote. "Given we had to take physical time away from our mama to do it."

.@CelebApprentice the fact you edited out all the facts, so we become entitled brats - expecting favours and using our mums condition for benefit is truly the lowest you could have gone.
I hope you pay your editors well for the souls they sell.

The fact they have edited this to seem like emotional manipulation and blackmailing people for sympathy is awful. Being gaslit on an edit over something so close to our hearts is truly beyond comprehension. We are grateful there was money made for all the charities involved.

We came on the show to raise money for charity and awareness for The Brain foundation. We didn’t need to do this show for exposure.
We signed on after they stressed & emphasised it would be a show with heart ; given we had to take physical time away from our mama to do it.

This is not unprecedented: The Veronicas have been regularly calling out the show online during the airing of episodes.

They are frequently shown fighting and bickering on screen, but claim their positive moments and strategy have been left out.

"Everyone knows us fighting is part of our brand - that doesn't bother us. What does is bringing us onboard under the pretence of heart - then editing out why we're there in the first place/our love for our team - leaving us only with drama. Our charity deserved so much more," they tweeted last week.

"We can't believe we actually need to preface this: But reality TV is highly edited out of 'context' to amplify drama. And narrative that suits the agenda. Please use common sense and understand this is obviously not a transparent show – it’s game show entertainment."

"The only 'business' in this show is the business of entertainment and drama… don't get confused about what this is. And we will continue to bring you the laughs and relatability."

And it's not just the cast and crew drawing criticism from the pair.

Speaking on air with Hit Network's Fifi, Fev & Nick, they called out the show's 'boss' Lord Sugar for a "lack of respect as a general human being" during filming.

"As far as the show goes, we're all there, we're all giving our time, doing our best, these are our jobs. Having some decency and respect for people in that position – enough to maybe learn their names – is the bare minimum.

"But bare minimum of respect doesn't seem to exist when you’re that big of a billionaire," Lisa said.

We often hear reality TV stars complain about the editing and manipulation in the genre, but it's rare for these calls to come from pre-established celebs.

Unfortunately, things could go from bad to worse for The Veronicas.

Tuesday night's episode ended with a cliffhanger that could see them fired with no money made for their charity when the show returns to Channel Nine on Sunday night.