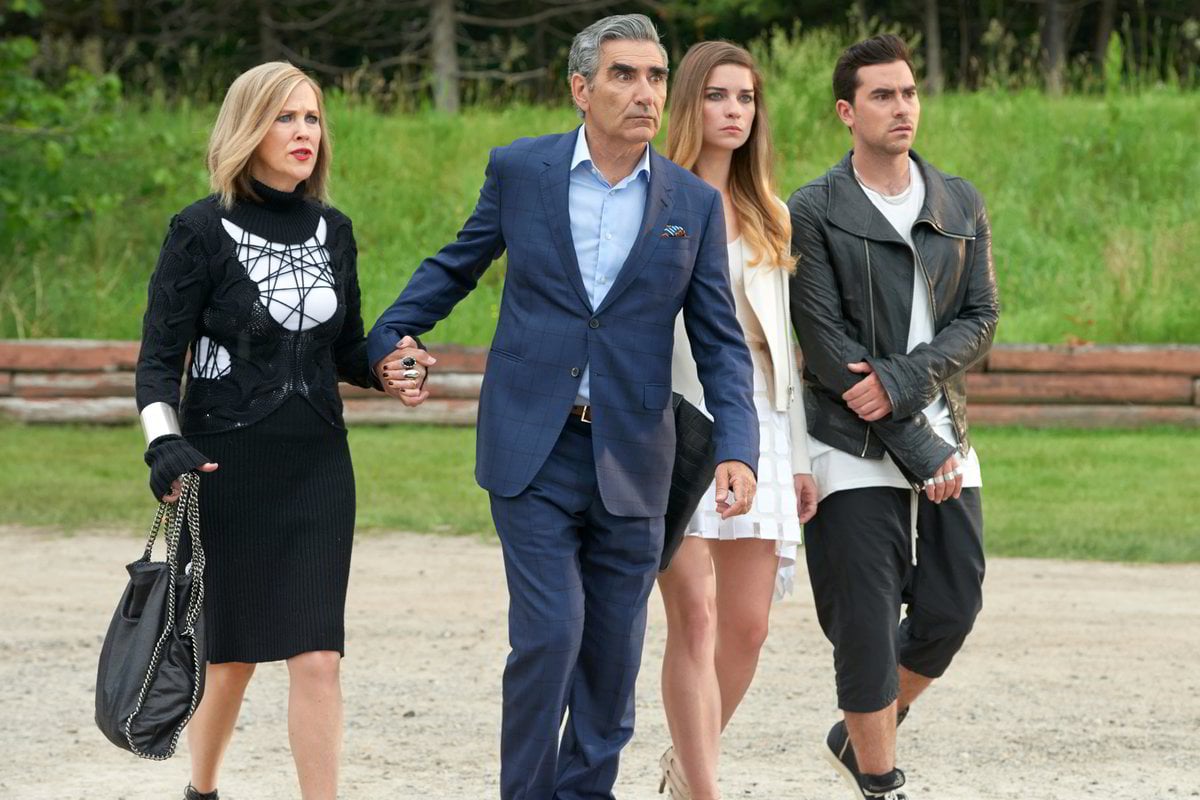 It’s as rare for a TV series to receive delayed fan-fueled critical acclaim as it is for J. K. Rowling to not be offensive on Twitter.

Yet that’s exactly what happened at the 2020 Emmy Awards when Schitt's Creek, an initially critically ignored low budget Canadian comedy, made history with the most Emmy wins by a single comedy series in the same season.

Watching Schitt's Creek win hasn't gotten old. In fact, Annie Murphy winning is the first moment I actually cried. I'm so happy for her and them. #Emmys pic.twitter.com/jVbkPcsS1F

While it's not unusual for a show to be bestowed with a slew of Emmys for its final season what's unusual about the Schitt's Creek clean sweep is that the people ticking those ballot boxes would not have acknowledged the show's greatness throughout most of its run, or even knew that it existed.

The Emmys have never been in the business of honouring shows with solid, yet slightly under the radar track records.

Instead, they like to be in the business of hanging with the edgy new kids on the block or else sticking with tried and true favourites. Shows with acclaimed lead cast members, big promotional budgets and buzzy first seasons.

This is an especially dominant trend in the comedy categories, which would explain why the Tina Fey led 30 Rock took out the main category three years in a row from its debut season, why Fraiser was in the awards mix from the get-go and how Modern Family reached juggernaut status from its unbroken five-year run in the Best Comedy category.

All continuing the trend of Emmy voters telling the public what's in vogue right from the pilot episode.

But for Schitt's Creek the road to Emmys success was not so conventional and clear cut.

Although both Eugene Levy and Catherine O'Hara had enjoyed long and illustrious careers before they joined the Rose family, Schitt's Creek kicked off with a whisper rather than a bang.

Father and son creative duo Daniel and Eugene Levy always knew that Schitt’s Creek, a comedy about the Rose family who are forced to relocate from New York City to a tiny backwater town they once bought as a joke when their fortune is lost, was always going to be a hard sell.

The Levys began pitching their idea for Schitt’s Creek to both American and Canadian networks in 2014, but found little love form the TV big hitters.

Eventually, the show was sold to CBC Television in Canada and secured final funding to start production from Pop TV in the United States, where it debuted in 2015.

Schitt's Creek quickly found fans in Canada, where it was the top-rated comedy the night it premiered, but struggled to find an international audience via Pop TV, but not for want of trying.

According to Eugene Levy, in an interview with Vulture, there was a heavy marketing budget thrown at the show each season and the cast were relentless in their promotion of the series, signing up for interviews across multiple outlets each season.

Yet still, the critical acclaim and awards never followed, at least in the all-important US market.

Watching Dan Levy watch his dad win an Emmy is a gift pic.twitter.com/XuUdPdOTkv

It seems that without a collection of critics singling out the series to everyday TV viewers, the show wasn't able to make its voice heard among the sea of new releases that hit our screens each month.

Then, in 2017, the fate of Schitt's Creek changed forever.

Netflix picked up the series and suddenly viewers had three seasons of the undiscovered Rose family antics to enjoy, seemingly out of nowhere with no award show accolades or glowing reviews to lead the way.

Although the streaming service never releases their exact viewership numbers, it is understood that ratings for the series soared as word-of-mouth praise spread about the new Netflix find.

A spokesperson once confirmed that " we’ve seen a high volume of social conversation on our Netflix channels about the show, and find that the majority of people engaging with our social content are discovering Schitt’s Creek for the first time on Netflix."

In what can only be described as a backwards road to awards show glory, as soon as the fans jumped on board the slow-burn success story, so did the critics.

Which might explain why in 2019 after never before being considered a contender since it's a debut, Schitt's Creek was nominated for four Primetime Emmy Awards.

The fact that the show went from zero wins to an unpreceded clean sweep across multiple categories in 2020 makes it quite clear that TV Academy members caught up with the show on Netflix prior to voting this season. Instead of having their fingers on the pulse from the initial pilot.

But instead of looking at this as a miss for the TV Academy, it's wiser to look at it as a positive sign that the archaic strings that bind award show systems are loosening.

For too long, the Emmys have refused to allow fan favourite cult shows to get a foot in the door, instead to follow an awards show formula rather than looking to what is making waves all on its own.

Perhaps this is the start of a world where fans, rather than a small handful of critics, have the ultimate say of which TV shows are deemed a true success.

You can watch all six seasons of Schitt's Creek now on Netflix.

Reply
Upvote
4 upvotes
I just love this show so much and I am so glad they are finally getting the recognition they deserve. It's full of talent.  It's so funny and beautiful and touching and it has the best character development I've seen in a long time.
E
essie 2 years ago

Reply
Upvote
2 upvotes
“Simply The Best!”  I haven’t enjoyed a TV show for such a long time (and actually waited weeks to watch the final two episodes because I didn’t want it to end). The characters, the costumes, the script, the delivery - outstanding entertainment. Schitt’s Creek absolutely deserved every accolade.
S
snorks 2 years ago

Reply
Upvote
@essie I loved the first couple of seasons, but found it really dropped off the cliff after that, so much so that I couldn't get through it.
L
laura__palmer 2 years ago

Reply
Upvote
@snorks I think it gets better as it goes along!
S
snorks 2 years ago

Reply
Upvote
@laura__palmer Once David opened the shop I really struggled. Got another 1/2 season out of it but that's it.
L
laura__palmer 2 years ago