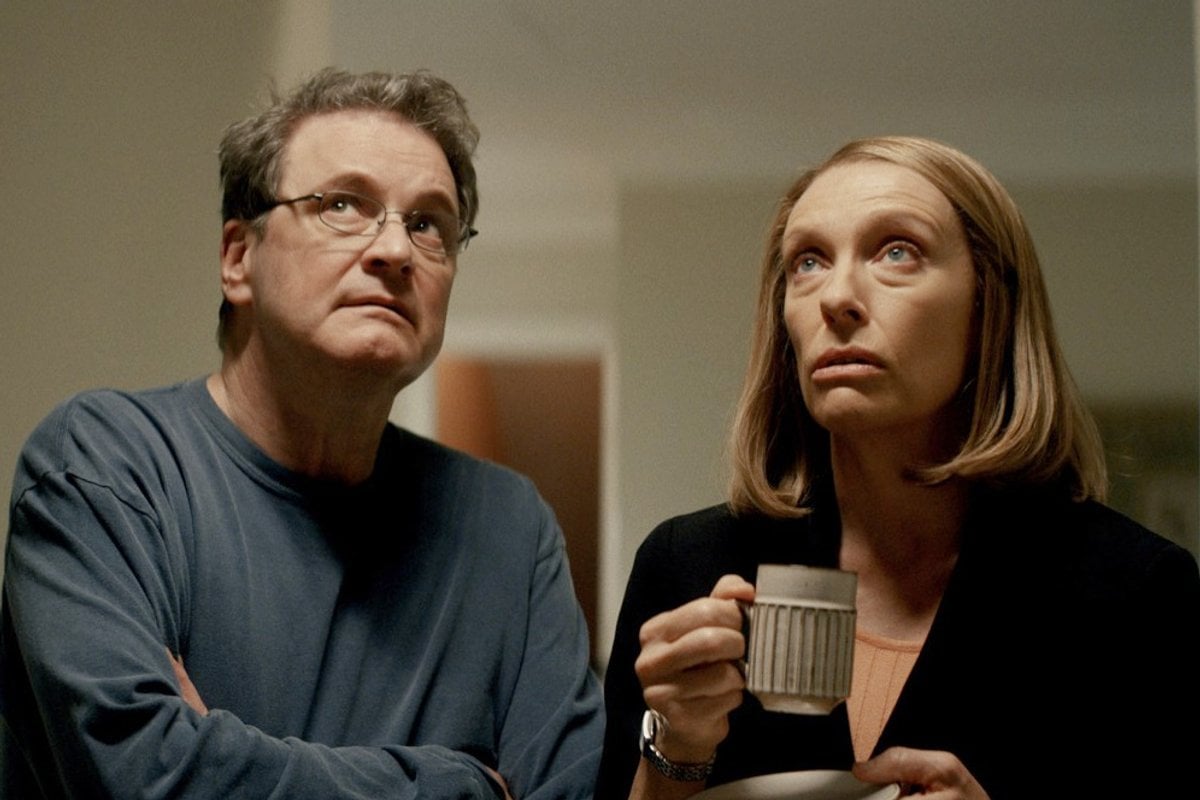 There's a scene in the first episode of the new true crime mini-series The Staircase that tells the audience exactly what they're in for.

Created by Antonio Campos (Martha Marcy May Marlene), the series is based on one of the most fascinating true crime stories of the past two decades. The story of wealthy North Carolina business executive Kathleen Peterson (played by Toni Colette), her untimely death at the bottom of a flight of stairs, and the subsequent arrest and conviction of her crime novelist husband Michael (Colin Firth) for her murder.

Watch the trailer for Binge's The Staircase. Post continues below.

In the scene, which plays out in the first twenty minutes of the series, the Peterson's teenage son Todd (Patrick Schwarzenegger) arrives home drunk from a party. When he pulls up out the front of the Peterson's sprawling suburban home, he's met with an unusual scene.

Todd eventually gains entry into his home and discovers his stepmother's bloodied body at the bottom of the stairs. He walks through to a room off to the side where his father, Michael, is inconsolable, crushed by grief and the gravity of the situation.

Later, the camera pans back over to the bottom of the stairs and we see the crime scene in all its gritty, bloody, haunting glory. There's blood all over the walls, the floors, and the body. Kathleen's grey sweatpants are soaked with her own urine. Her face is twisted into an expression of pure fear and horror. Hers was not an easy death.

This is what the series does so brilliantly. It shows us the true horror behind the crime stories we have become obsessed with over the past decade.

The grief and the pain and the bodily fluids. The humans who are lost in these stories and the ones that are left behind to pick up the pieces. 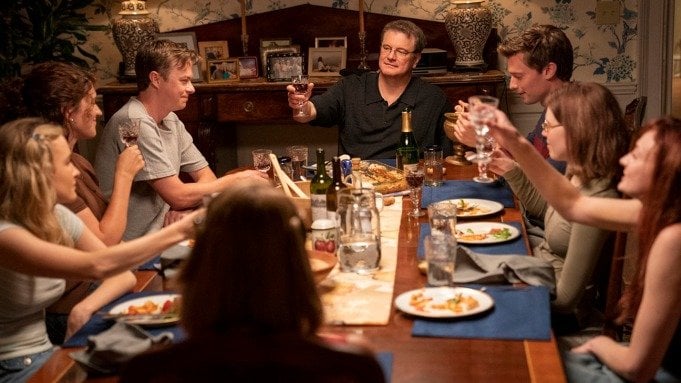 The show flashes between the moment Kathleen's body was discovered at the bottom of the stairs and a series of events leading up to that moment.

Through a collection of small scenes or vignettes, Campos paints a picture of the woman Kathleen was and the family she loved. Kathleen was a loving mother, stepmother and adoptive mother. A hard-working executive who drunkenly jumped into the pool in the middle of a party. A wife who may have discovered her husband's biggest secret.

The Staircase also paints a picture of the Peterson family. Of Michael, the patriarch, who may be a cold-blooded killer or the unluckiest man in the world. A grieving widow or a duplicitous murderer who was living a double life. Firth is almost unrecognisable as Peterson, with his sallow complexion and his theatrical, almost rehearsed, manner of speaking.

What the series does so well is showing us the collateral damage in this story. The five kids who either lost their mother, stepmother and adoptive mother in a freakish accident or the five kids who found it too difficult to accept the reality that their loving, larger-than-life father killed their mother with his own hands.

The eight-part series (the first three episodes drop on Binge on Thursday, May 5) also holds a mirror up to own our obsession with, and overconsumption of, true crime.

Kathleen's death and Michael's fight to clear his name was the subject of the critically acclaimed documentary series, also called The Staircase, which followed Michael's story in 2004, 2013 and 2018.

The documentary makers, editor Sophie Brunet and director Jean-Xavier Lestrade, are now so entwined with the story of Michael Peterson, that fictionalised versions of them appear in this dramatised HBO version. And Campos, who has long been fascinated with the case, appeared in the background of the documentary, as he watched the case play out in court.

While I'm yet to see the entire series, it seems that Campos did not set out to solve the mystery surrounding Kathleen's death. Instead, throughout the series, he implores the audience to ask themselves a series of questions about the nature of these kinds of cases and our fascination with them.

The Staircase is not always an easy watch, but it might just be the series that changes the true crime genre forever.

The Staircase premieres on Binge on Thursday, May 5, with the first three episodes. New episodes drop weekly after that.