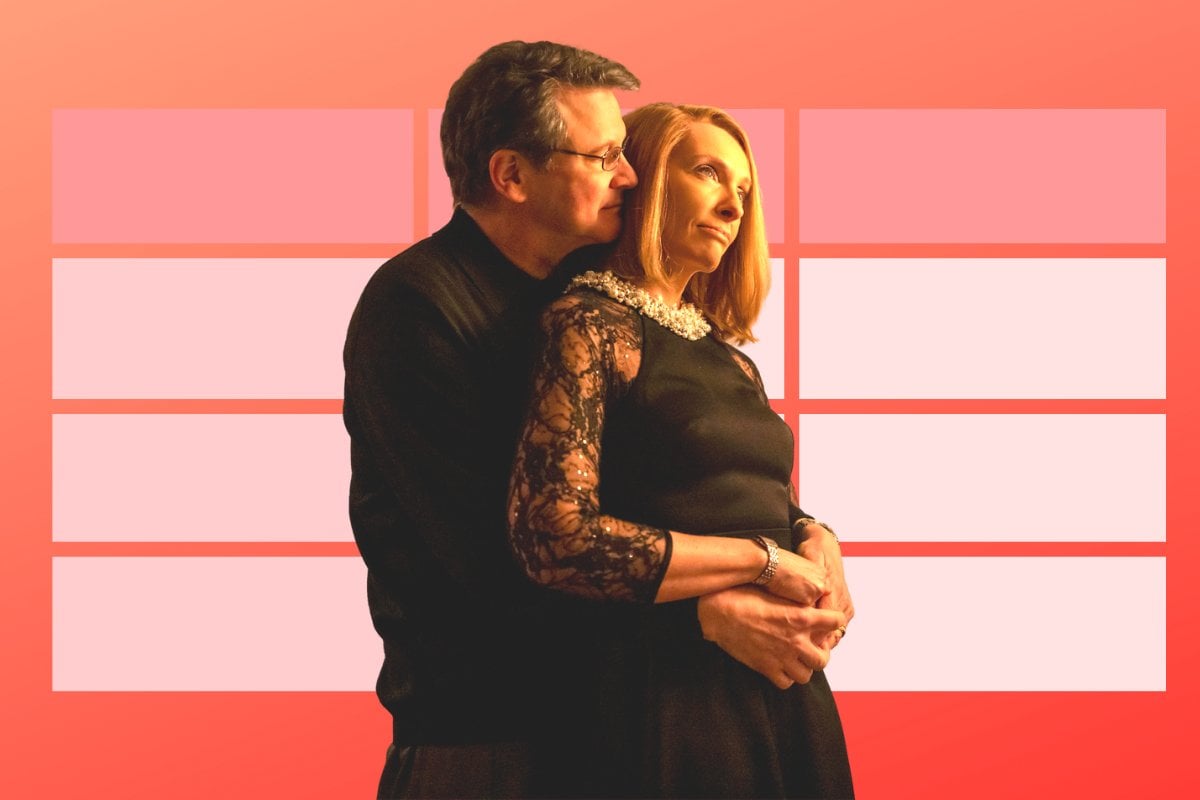 Warning: This article contains some light spoilers for the first four episodes of Binge's The Staircase.

If I had to describe The Staircase to someone completely unfamiliar with the original case, I would probably tell them it's the equivalent of a true crime turducken.

In this analogy, HBO's new drama series The Staircase, which stars Colin Firth and Toni Collette as Michael and Kathleen Peterson, is the turkey. The original documentary, also named The Staircase, which was initially released in 2004, with a sequel released in 2013, and a followup commissioned by Netflix in 2018, is the duck. And the real-life incident, in which North Carolina business executive Kathleen Peterson was found dead at the bottom of a set of stairs in her sprawling suburban home on December 9, 2001, is the chicken.

Watch the trailer for Binge's The Staircase. Post continues below.

This three-layered stuffing means that many people were already heavily invested in the mysterious death of Kathleen Peterson, her husband Michael's 2003 conviction, and everything that came after, before they had even watched the first episode of the new series.

This case holds a special place in the heart of true crime fans because The Staircase is probably the docuseries which spurned the true crime genre, which is now such a pivotal part of pop culture.

Without The Staircase, there probably wouldn't be Making A Murderer or The Jinx. Or even Serial season one. There definitely wouldn't be Tiger King.

The Staircase piqued our interest in true crime and made it 'cool' to be interested in the untimely, grisly deaths of strangers and the mysteries surrounding those deaths.

Don't get me wrong, people were always interested in murder and the macabre, but The Staircase was the first step in that interest going mainstream.

From the beginning, The Staircase was more than just a documentary, or even a real-life crime. It spurned countless podcast episodes and YouTube videos. Think pieces and recaps. It made its way into dinner party conversations, and in its later installments, group chats.

Michael Peterson became a figure that was larger-than-life. He felt like a character in a HBO series, long before he was one. His legal team, and the family members who allowed themselves to be filmed for the docuseries, also became a cast of characters.

And the docuseries had it all. Plot twists, and new seasons, and never-ending drama.

With all this mind, it may seem like The Staircase (the dramatised series) was unnecessary. Before the series was released many were asking: After 20 years and intense, ongoing media attention, what could a dramatised series possibly add to the story?

And the answer is plenty.

Because even though millions of people were invested in this potential murder and the consequences of said potential murder, and everyone knew the name Kathleen Peterson, for the past two decades Kathleen, in the most part, remained a mystery to us.

She was mostly a faceless victim. Our knowledge of her life before meeting and marrying Michael Peterson was limited. We knew she was a mother and a business executive. But we didn't know how fiercely she loved her adoptive daughters, how she joked around with her one biological daughter, or how the family would laugh and goad each other around the dining table.

We had no idea whether Kathleen had a favourite pair of earrings. Or what her favourite book was. Or how she took her coffee.

She was just a woman in a faded photograph that was occasionally flashed up on screen. 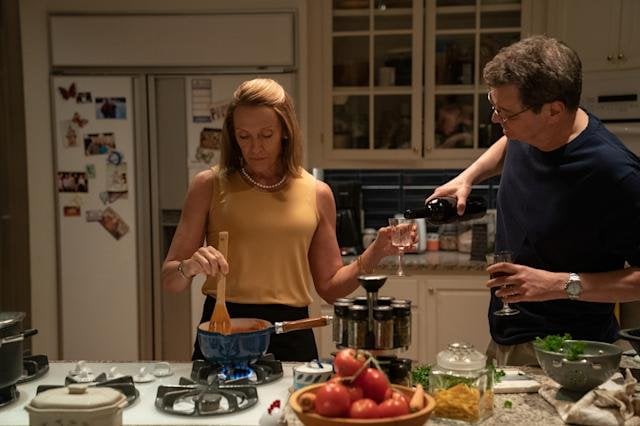 In this sense, Kathleen became almost superfluous in the story of her own death. And in a way, that made it easier for us to consume that story. To watch the docuseries as though we were watching a game of sport. To discuss the details of her death between mains and dessert.

The dramatised series has taken that luxury away from us.

It centres Kathleen's story - the wife, mother, business executive and sister who was found dead at the bottom of the stairs.

The series follows Kathleen's life from three months before her death until she was found dead at the bottom of the stairs. It also follows Michael's story as he allegedly finds Kathleen, and then is charged and convicted with her murder. Through regular flashbacks to the last three months of Kathleen's life, she is a constant in the story.

By casting Toni Collette - one of the most loveable actresses in Hollywood (I mean, she was Muriel bloody Heslop) - it makes it impossible for us to erase Kathleen or to look away from her.

And when Kathleen's death is reenacted - both as an unfortunate accident and a murder - we're forced to face the reality of a woman like Kathleen, a woman like Toni Collette, a woman like us, being snuffed out in a violent act.

After I initially reviewed the series and recommended it to everyone in my life, I kept hearing the same feedback from people.

They, despite loving the casting and acknowledging the sheer brilliance of the series, were finding it hard to watch.

It was too confronting. Too gory. Too much for a Thursday night after dinner watch, or a Sunday afternoon binge.

At first, I worried I hadn't prepared people enough for what they were going to experience. That maybe I should have warned them this was a series about the brutal death of a woman and that it doesn't shy away from that fact.

But then I realised our reaction to the series speaks volumes about our appetite for true crime.

Most of us went into The Staircase thinking it would be a compelling series, full of plot twists, that we could watch after dinner and then go to bed, not giving it a second thought.

We weren't expecting to be finally introduced to the victim in this story. And to see in her ourselves, our mothers, our sisters, our best friends.

In humanising Kathleen Peterson, The Staircase has taken away our ability to consume true crime without thinking about the victim.

It's blurred the line between the true crime stories we consume about women from far-away places and distance decades, who are killed by the men in their lives. And the women we read about daily in news headlines.

And finally, The Staircase has held a mirror up to us, and forced us to ask ourselves: why do we find stories about the brutal murders of women so, so compelling?

The Staircase is streaming on Binge.

Reply
Upvote
Thankyou for this. Reminds me of a British crime show I watched recently (can't remember name, sorry) A lecture on forensic psychology. The lecturer asks 'who can name a serial killer?' and everyone puts their hand up. But he then asks 'Who can name a victim of these killers?' And no one has an answer. It's time to put the victims into the frame and give them the humanity and justice they deserve
News
General
Opinion
True Crime
Politics
Sport
Explainer
Entertainment
Celebrity
Reality TV
Movies
TV
Books
Rogue
Royal
Lifestyle
Beauty
Fashion
Weddings
Home
Wellness
Health
Fitness
Travel
Food
Family
Before The Bump
Pregnancy
Baby
Kids
Teens
School
Parent Opinion
Work & Money
Money
Finance
Career
Lady Startup
Relationships
Sex
Dating
Separation
Friendship
Family
Real Life
Couples