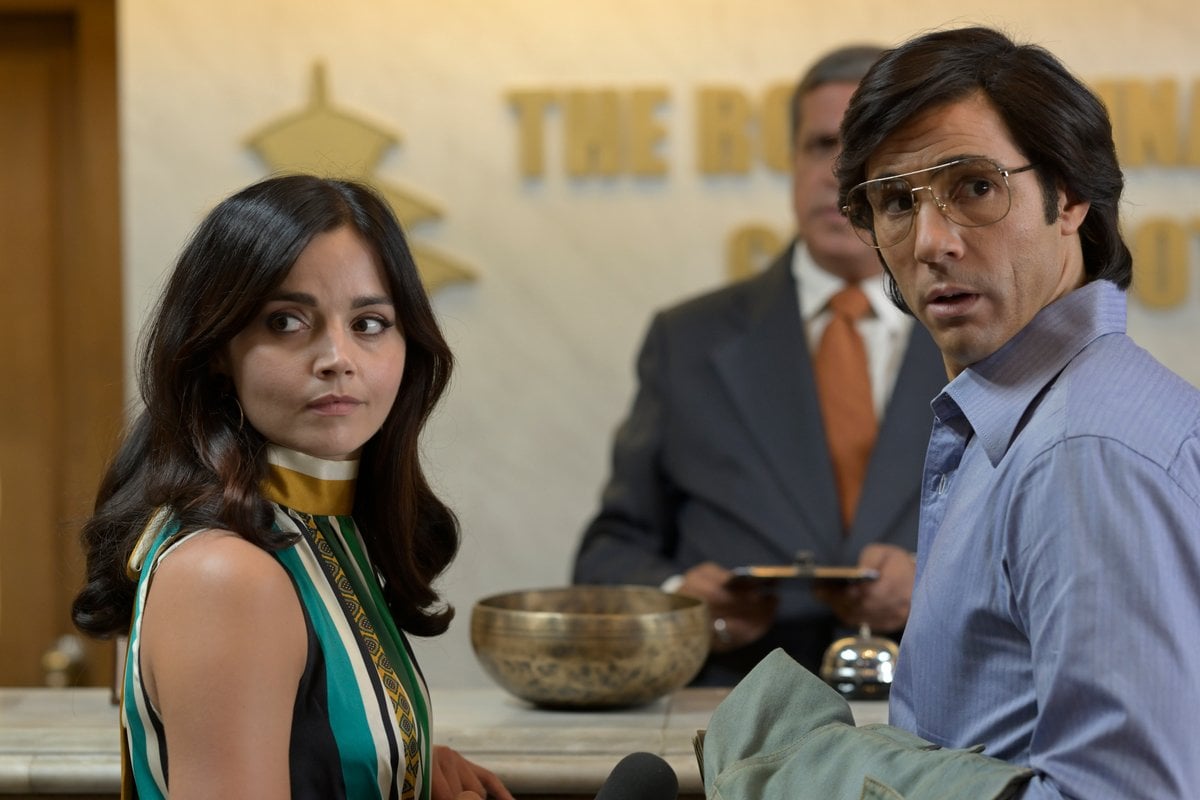 In 1976, Herman Knippenberg, a 31-year-old Dutch diplomat, received a letter from the relative of two missing backpackers.

The two backpackers, Henk Bintanja, 29, and his fiancée Cornelia Hemker, 25, had stopped communicating with their families.

Shortly afterwards, Bintanja and Hemker's bodies were found burnt on the side of a road near Bangkok, Thailand, leading Herman Knippenberg on a years-long investigation into their deaths.

It was this investigation that led Knippenberg to discover that the couple had been burned alive by Charles Sobhraj – one of Asia's most wanted criminals.

Watch the trailer for Netflix's The Serpent below. Post continues after video.

In the years that followed, Knippenberg dedicated his life to finding incriminating evidence against Sobhraj in an attempt to have the serial killer arrested.

"I couldn't forget him, it was like having malaria," Knippenberg later told The Nepali Times.

"Every couple of years or so something would happen that would draw me back into the case again."

Starring Tahar Rahim, Billy Howle, and Jenna Coleman, the eight-part series is inspired by the true story behind the pursuit of Charles Sobhraj and his accomplices.

Is The Serpent a true story?

In the 1970s, Charles Sobhraj, best know as 'The Bikini Killer', preyed on Western tourists who were travelling through the "Hippie Trail" of Southeast Asia.

During that time, Sobhraj is believed to have been responsible for between 12 and 24 murders. 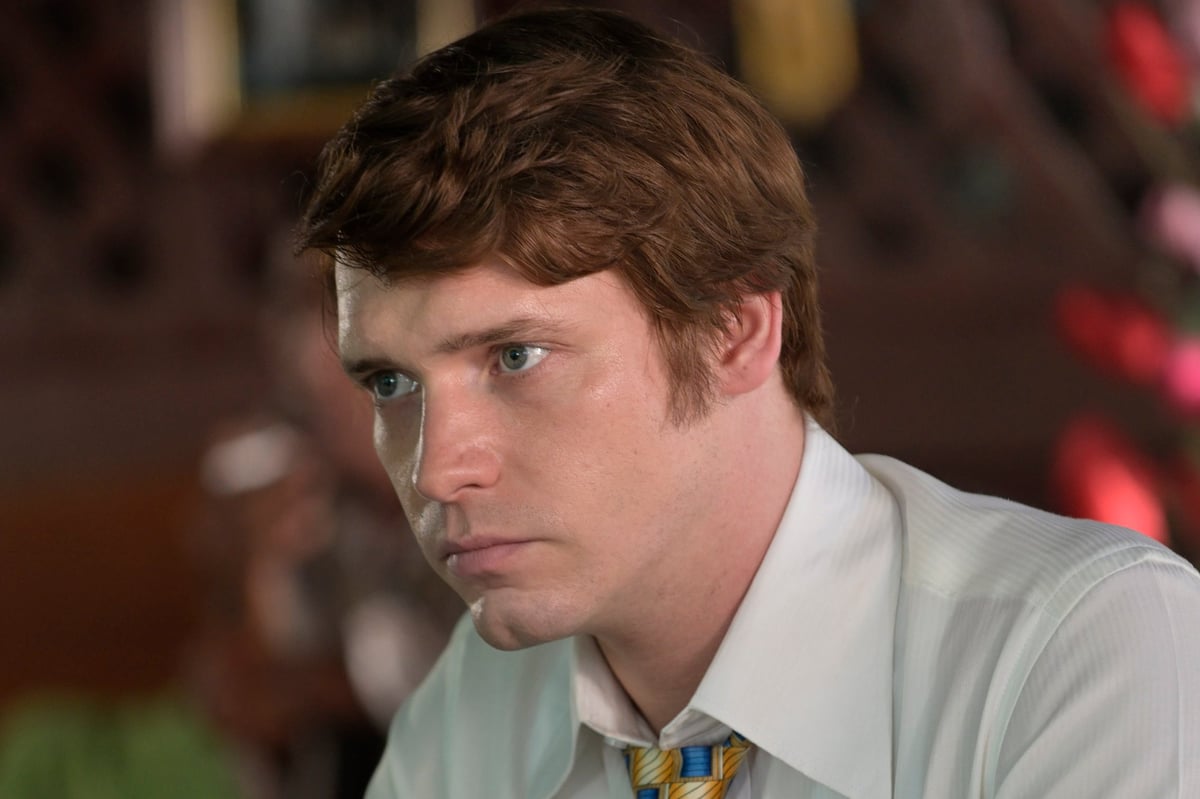 Billy Howle as Herman Knippenberg in The Serpent. Image: Netflix.

Sobhraj was unlike many other infamous violent offenders. Described as "handsome, charming and utterly without scruple", Sobhraj would lure young backpackers to their deaths by befriending them on the "Hippie Trail" – a popular journey for young tourists that began in Western Europe and travelled through the Middle East and Southeast Asia. (The serial killer reportedly had a strong hatred of hippie culture.)

Aided by his accomplices, girlfriend Maree-Andrée Leclerc and henchman Ajay Chowdhury, Sobhraj posed as a gem dealer named Alain Gautier to befriend tourists on the "Hippie Trail", before stealing their belongings and even their identities.

In the years that followed, Sobhraj gained the loyalty of dozens of tourists by essentially scamming them. In one instance, Sobhraj helped two French tourist recover their missing passports. However, it was Sobhraj who had stolen their passports in the first place.

Using various hijacked identities and stolen passports, Sobhraj and Leclerc evaded capture for years as they travelled in Thailand, India and Nepal.

During that time, Sobhraj killed at least 12 travellers, disposing of his victims by any means necessary.

One woman from Seattle, Teresa Knowlton, was found drowned in a pool in a floral bikini in the Gulf of Thailand. The discovery led to Sobhraj's infamous nickname: 'The Bikini Killer'. Other victims were drugged or strangled.

It was Herman Knippenberg who orchestrated Sobhraj's eventual capture. 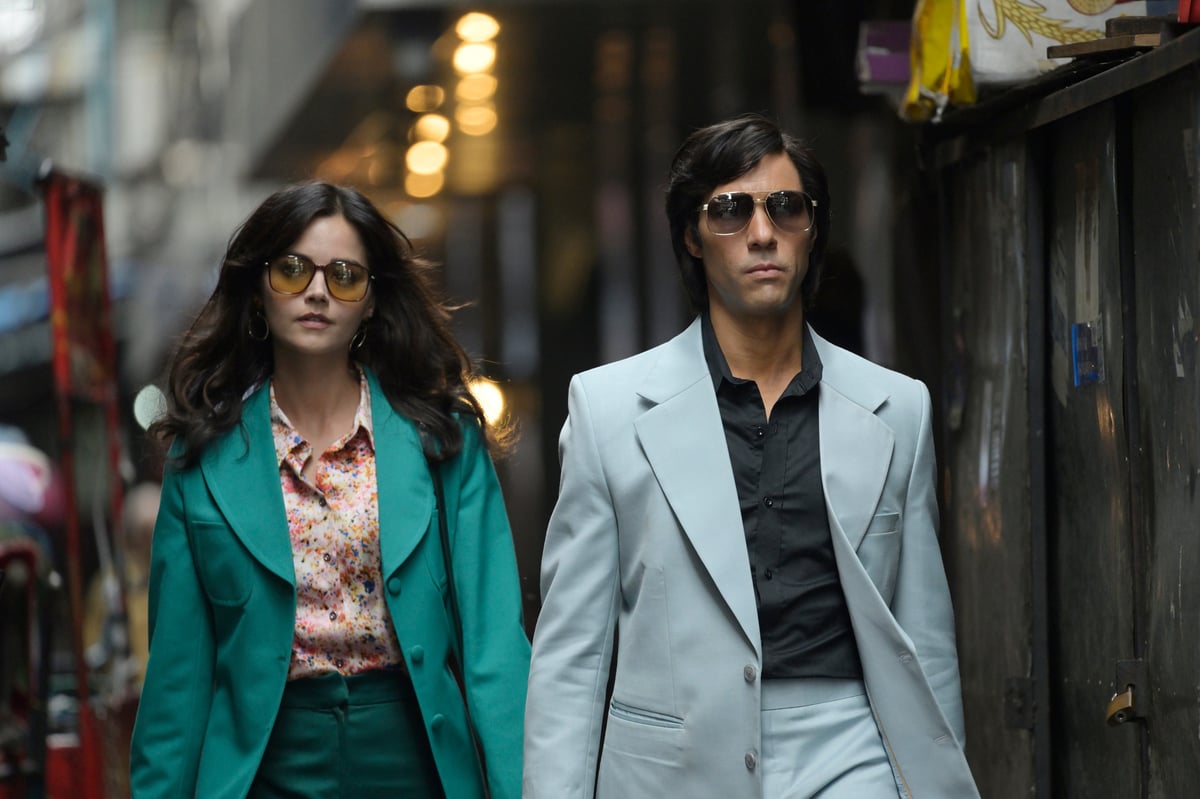 Jenna Coleman as Marie-Andrée Leclerc and Tahar Rahim as Charles Sobhraj in The Serpent. Image: Netflix.

After Gires warned Knippenberg that Sobhraj was planning to travel, a team raided his apartment while he was overseas.

According to CNN, Knippenberg and the group found "five kilograms of medicine and three industrial-size cartons of liquid containing a drug that acted as both a laxative and a 'chemical straitjacket'".

Shortly afterwards, Knippenberg went to the press with his discoveries, leading to the Thai authorities to issue an Interpol notice.

"It was all so easy for [Sobhraj]," Knippenberg told The Independent in the 1990s.

"He got away with so much for so long, he believed he was invincible. Personally, I think he might have killed many more."

On July 5, 1976, Sobhraj and Leclerc were both arrested after drugging an entire tour bus of French students in an attempt to rob them.

Afterwards, Sobhraj was jailed for various charges for 20 years.

While Leclerc was originally sentenced to time in prison, she was later allowed to return home to Canada for ovarian cancer treatment. She later died in April 1984 at 38 years old. 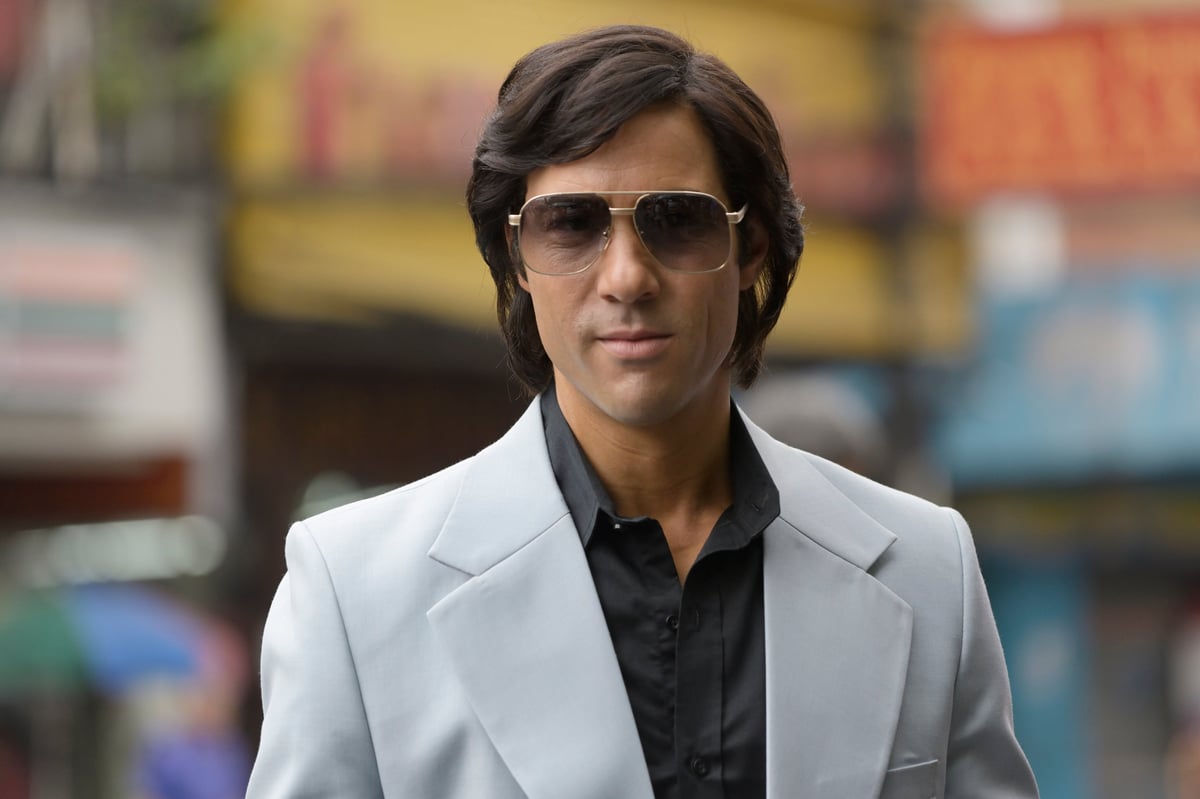 Tahar Rahim as Charles Sobhraj in The Serpent. Image: Netflix.

In 1997, Sobhraj was released from jail after the warrant for his extradition to Thailand expired. He then returned to France, where he had citizenship.

While there, Sobhraj, seemingly obsessed with fame and notoriety, hired a publicist.

The infamous serial killer charged large sums for media interviews and even sold the rights to a movie based on his life for millions.

Interestingly, in 2003, Sobhraj returned to Nepal, where there was still a warrant for his arrest.

"He needs to re-inflate his own celebrity. So he goes to the one country where he’s still wanted," The Serpent producer Richard Warlow told Vanity Fair.

"The other thing to know about Charles is that he had this incredibly arrogant belief that wherever he went in that part of the world, the police force was either incompetent or corruptible. So he wouldn’t have considered himself to be in any danger of finally being apprehended."

While in Nepal, the serial killer was arrested in September 2003 for the 1975 murder of an American woman.

Then, in August 2004, Sobhraj was sentenced to life in prison. 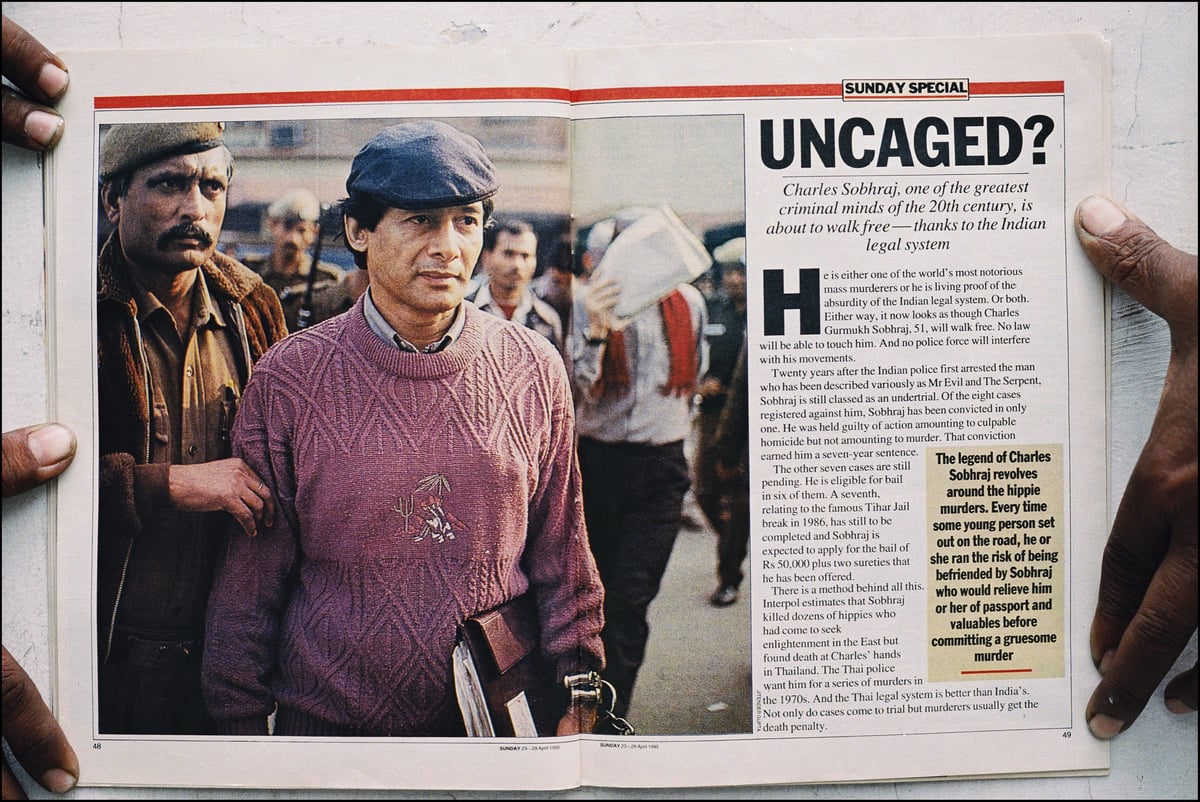 An article published about Charles Sobhraj in 1997. Image: Getty.

He was later convicted of the murder of another tourist in 2014.

Herman Knippenberg, on the other hand, is now 76 years old. The retiree lives in New Zealand with his second wife. His first wife, Angela Kane, who assisted in the search for the serial killer, has also remarried.

Even now, decades later, Knippenberg has kept his files on the Charles Sobhraj case.

The Serpent is available to watch on Netflix now.