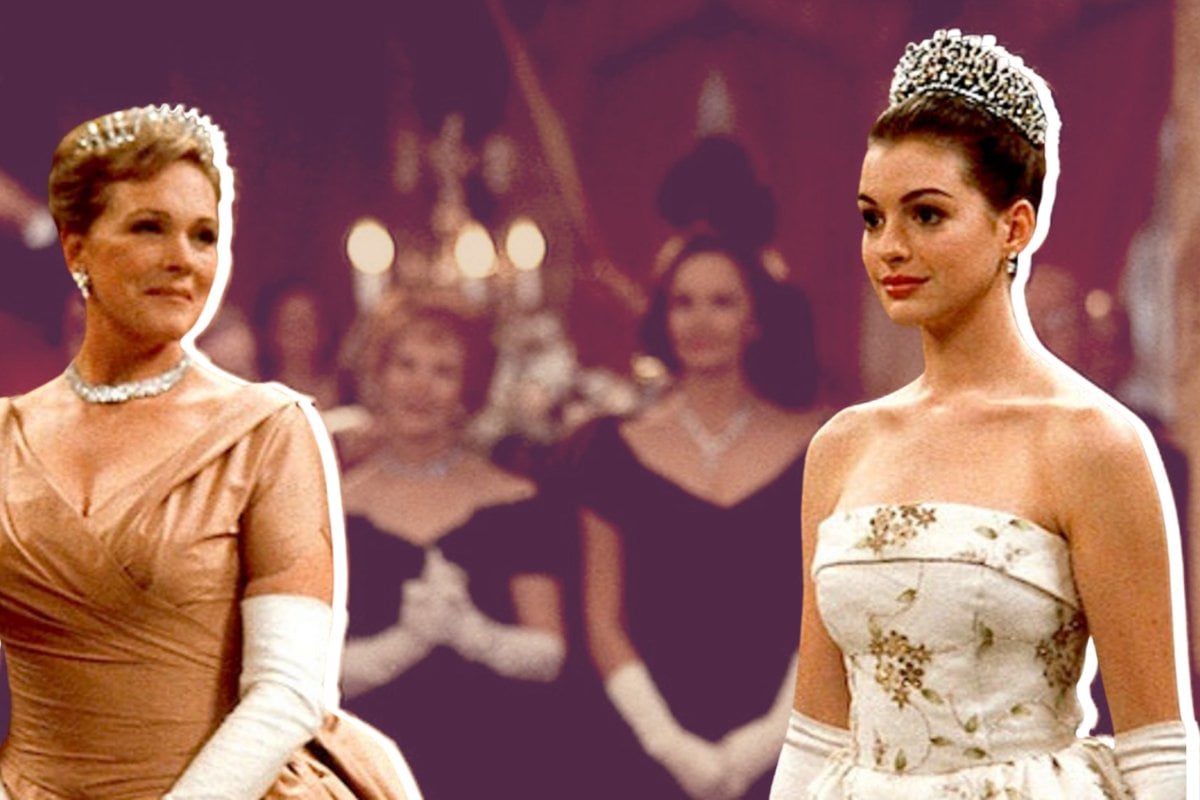 The Disney film, which was directed by Garry Marshall (the man behind Pretty Woman), introduced us to Mia Thermopolis, her cat Fat Louie, her friends and foes from high school, and most importantly, Clarisse Renaldi, the Queen of Genovia.

Want a nostalgia hit? Watch the trailer for The Princess Diaries below. Post continues after video.

And after a weekend re-watch of the film, we've been feeling a little nostalgic.

So, we decided to take a look back at eight things you probably didn't know about The Princess Diaries.

Anne Hathaway was a last resort for Mia.

It turns out casting for Anne Hathaway's iconic role as Mia Thermopolis was more contested than we might have guessed.

Mia's role was initially offered to musician and actress Juliette Lewis, but when she turned it down, producers approached a whole bunch of other stars like Liv Tyler, Kirsten Dunst, Alicia Silverstone, Jessica Biel and Claire Danes.

When Hathaway later auditioned for the role, it didn't take much to convince the team.

She was cast after one audition when Hathaway accidentally fell off her chair, just as directors imagined Mia.

The Princess Diaries went on to be the movie to launch Hathaway's career in Hollywood.

In fact, the movie was meant to look very different.

The Princess Diaries took many forms before finding its place as the clumsy, funny film we now know and love.

Based on the novel of the same name, as author Meg Cabot would have it, Mia's hometown would be New York, rather than San Francisco.

To create another point of difference, the original script was called The Princess of Tribeca.

Oh, and in The Princess Diaries book, Mia's father is still alive. Which leads us to...

Mia's dad was killed off to make more room for Julie Andrews' character.

In The Princess Diaries book series, Mia's father played a huge role in her story.

But, author Meg Cabot didn't have any say in the direction of the movie, so producers decided to cut his role altogether to make space for Julie Andrews' character.

Many of his lines were given to Mia's grandmother, making her the iconic character we know so well.

Whitney Houston was one of three producers.

Whitney Houston might be known for her wonderful singing voice, but she also worked as a producer in several films like The Princess Diaries and The Cheetah Girls in the early 2000s.

It was Houston who came up with the iconic scene where Mia smeared ice cream on Lana’s cheerleading uniform.

And, the icing on the cake? For director Garry Marshall's birthday, Houston serenaded him with a very special birthday song.

In an interview on The Happy Days of Garry Marshall, Hathaway revealed that Mia's dramatic fall on the bleachers was completely unscripted.

"I turned really fast, slipped on a puddle, and just fell. I mean just absolutely fell, and burst out laughing and kept going with the scene. Never thought about it again," she said.

"All of a sudden, like six months later, it’s in the trailer. He kept it because it was a charming moment."

This makes so much sense.

When filming the final scene, the crew played 'Like A Prayer' to get the cast dancing.

The final scene of The Princess Diaries was one of the best dance scenes of all time, if we do say so ourselves.

And as the crew have since revealed, there was a very particular reason for it.

To get the cast moving and excited, the crew turned on Madonna's 'Like A Prayer', which was dubbed over in the final edit.

Of course, that meant a whole bunch of takes to ensure no one was lip syncing to the lyrics.

Director Garry Marshall made a cameo in the original film.

The film's director, Garry Marshall, made an appearance at the annual Genovia independence ball at the end of The Princess Diaries.

But that wasn't the only cameo of the film.

Both his daughter and granddaughters also appeared in minor roles.

His granddaughters Lily and Charlotte appear as fans of the princess looking for an autograph, while his daughter, Kathleen, appears as Charlotte Kutaway, the Queen of Genovia’s secretary.

The photograph of Mia's father in the film's opening scenes is actually a photo of Anne Hathaway's dad.

Audiences were given a glimpse of the main character's father in one particular scene where Mia briefly reached for the photo frame.

The Princess Diaries is available to watch on Disney Plus.