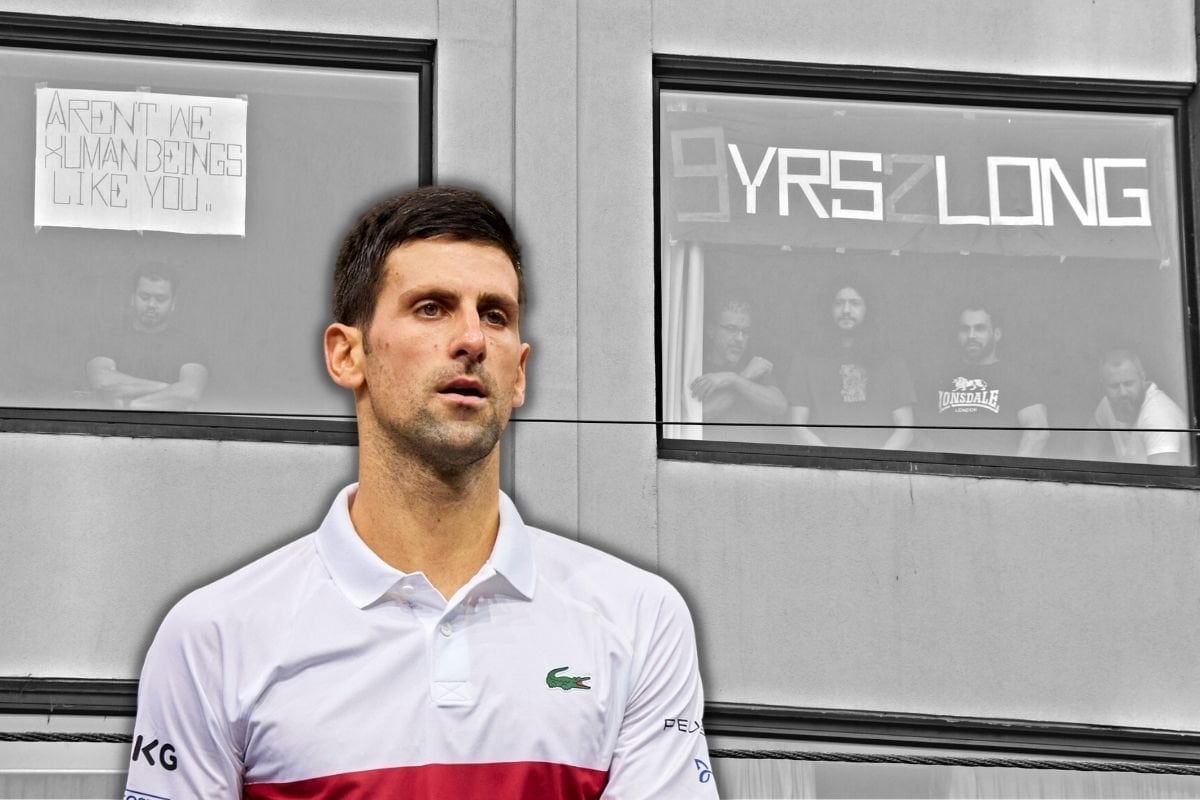 Refugee advocates estimate about 33 men are currently being detained inside Park Hotel in Carlton, Melbourne.

The makeshift detention centre - once a COVID quarantine hotel - is the new temporary home of world tennis No.1 Novak Djokovic, who is facing possible deportation after being denied a visa to enter Australia on Thursday.

By Thursday afternoon, supporters with Serbian flags and a media pack had joined regular refugee protestors outside the Victorian building.

Watch: This video was shared by some of the men inside last year. Post continues after video.

But while Djokovic's stay will likely only be fleeting, the other men behind those walls have been fighting for freedom for nine long years.

Their plight only remains in the headlines sporadically thanks to the Australian government's continued ironclad dedication to harsh immigration policies.

Here are some of their stories.

Cousins Mehdi Ali and Adnan Choopani are two of the men being held in the same hotel as Djokovic.

They arrived in Australia from Iran seeking sanctuary when they were 15 and 16. In their country, they faced systemic oppression as members of the Ahwazi Arab minority.

On January 5, Mehdi tweeted, "I'm getting close to starting my tenth year in detention. This whole thing is absurd."

I came to Australia asking for safety when I was just 15 years old.

Now I am 23 and still in detention. I am suffering.

Shame on this cruel policy that destroyed my childhood.#NoOneCanHearUs pic.twitter.com/OJhl1lLWIH

When they first arrived as teenagers, the boys were sent to Christmas Island where they stayed for nine months.

In 2014, they were transferred to Nauru and later that same year their claim for refugee protection was formally recognised because of a "well-founded fear of persecution" in their home country. But that didn't grant them freedom.

In 2019 they were brought to Australia under medevac laws and have ever since been transferred between onshore detention centres and guarded hotel rooms.

Every night at 8 o’clock we protest the 8 years of prison we have suffered. I came here at 15 of age. I am now 23. Where were you 8 years ago? How has your life changed? Imagine being in prison that whole time when you only wanted safety. So many lost moments. #8YearsTooLong pic.twitter.com/rGizsTyero

During their nearly 10 years in detention, they've been beaten, abused, and witnessed friends burn themselves to death. Adnan sewed his lips together in protest at his treatment for a time, and as Mehdi wrote in late 2021, "We can't hold it in anymore and we can't stand the torture. We are suffering so much. They're breaking our spirit and we can't do it anymore."

On Thursday, it was Mehdi's birthday. He turned 24. He received numerous calls asking him for comment about the Djokovic situation when his own is so much more dire.

It's so sad that so many journalists contacted me yesterday to ask me about Djokovic. I've been in a cage for 9 years, I turn 24 today, and all you want to talk to me about is that.

Pretending to care by asking me how I am and then straight away asking questions about Djokovic.

The cousins' only 'crime' is asking Australia for safety. And yet as Mehdi points out, he's served more time locked up than hardened criminals.

"I've served more time than rapists, but I've never committed a crime in my whole life... a murderer might probably be out on probation by now," he wrote on January 6.

Mohammad Joy Miah travelled to Australia from Bangladesh in 2013, and has been in detention ever since.

From his Park Hotel room, Miah shares drawings of his pain and descriptions of his situation.

"All my life I am inside a room 24/7. My life is a room. Inside this room of melb in park prison. I try not to die I always fight for my freedom," he wrote on January 2.

💔 DEAR KAREN ANDREWS
MY messages is to you
As a mother of humanity
I am mentally ill
I am physically ill
I've been in a room for the last few days & I can't breathe anymore
As the days go by our condition is getting more worse💔
Pls save our lives
Pls Open the windows #GameOver pic.twitter.com/kW5GaEJvxO

Mustafa Salah arrived in Australia from Iraq with his father Salah Mustafa at the age of 14. After being detained on Nauru for several years they were transferred to the mainland in 2019 under medevac legislation.

Mustafa is 23 now, and has been in detention for eight years, telling SBS last year, "They destroy my life, I haven't been schooling. I haven’t seen my mum for a long time."

The men are being held in separate Park Hotel rooms, and leave only to use the washing machine.

Salah Mustafa is a mechanical engineer by trade. He just wants a future.

"I need stability for me or for my son, I am not a criminal. Enough."

Park Hotel retails for $104 a night online and calls itself a "luxurious 4.5-star hotel set in a prime location."

It was being used as hotel quarantine in 2020, and has since been turned into immigration detention.

In October, the hotel experienced a COVID-19 outbreak, with half of the detainees and around 20 staff members falling ill. 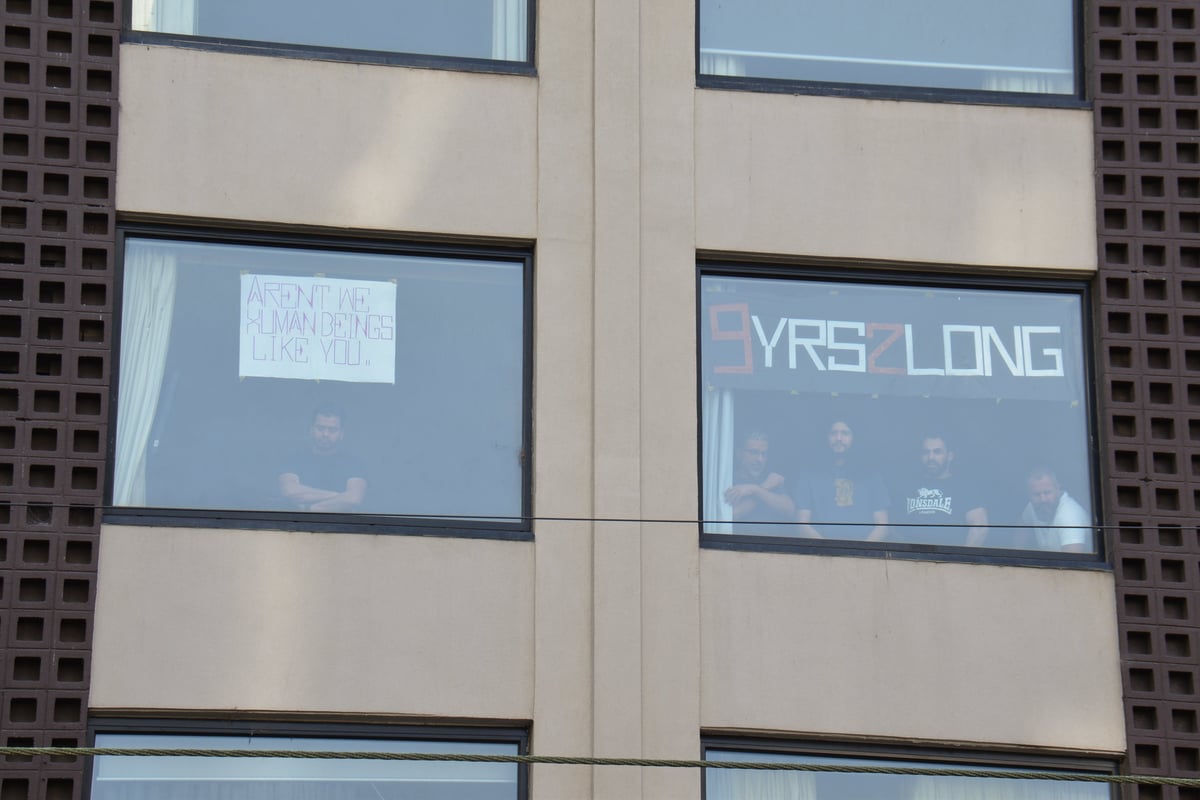 Refugees send messages to those gathered outside the hotel that Novak Djokovic has joined them in. Image: Getty/Recep Sakar/Anadolu Agency.

In December, two fires broke out on the third and fourth floors. Mehdi shared on Twitter that as the fire raged, they were kept in the building.

"We are still stuck in the level one lobby. We have no access to fresh air and some of us are having health problems. There was a bathroom problem, and some guys had to relieve themselves in bottles. Some need to smoke and some need blankets," he wrote.

There has been evidence of maggots in food and as SBS reports, the site has been condemned by epidemiologists and architects for its poor ventilation.

Pls pay attention.
Urgent-see this food with Maggots
It was delivered at 5.30pm tonight as evening meal at Park prison for 34 men.
Even guards agreed not edible-took it away.
Now men have no dinner.
Detained for 2yrs,now in rooms on level2, now maggots in food!#GameOver pic.twitter.com/ar5jFv7zlI

Adnan has told ITV he and fellow detainees have been receiving mouldy bread.

"We’re under guard 24/7 and the windows can’t be opened at any stage," he added.

"I can’t believe it, he’s [Djokovic] just on level one and we’re on level two."

Here's how you can help refugees in Australian detention:

Reply
Upvote
1 upvotes
10 YEAR'S!!
That is absolutely ridiculous. How can these poor men pose any threat to the community after 8-10 years of imprisonment? Can there be any other reason why they may locked away? They deserve better.
C
cat 5 months ago

Reply
Upvote
1 upvotes
@i.k most of them have been assessed as being genuine refugees who don't pose a threat. But we imprison them 'on principle' because they came by boat (entirely legally under international law). Yet we have the gall to accuse China of human rights violations.
I
i.k 4 months ago

Reply
Upvote
@cat Surely a point has been made after 10 YEARS.
C
cat 4 months ago

Reply
Upvote
1 upvotes
@i.k oh Im not defending it for a second, its appalling.  I think our politicians should be hauled up before the Un for crimes against humanity.
Y
yeahyepyes 5 months ago

Reply
Upvote
1 upvotes
The reason any asylum seeker is detained for any substantial amount of time is the generous appeals process that Australia allows. This gentlemen will have had his application for refugee status refused (no doubt multiple times) and is appealing the decision rather than accept it and return to his own country.
M
mamamia-user-482898552 5 months ago

Reply
Upvote
2 upvotes
@yeahyepyes Yes, if only these pesky asylum seekers would just go back to their idyllic countries where there is clearly no threat to their well being and safety... it's so simple isn't it?
P
petrolhead 5 months ago

Reply
Upvote
@yeahyepyes  Good  lord, did you hear yourself. Your key words were Asylum Seekers. They don’t always have an option to return to their  country hence, seeking Asylum. The world is far from a perfect place. Some have a shocking existence.
C
cat 5 months ago

Reply
Upvote
@yeahyepyes generous appeals process? You have clearly never been involved in anything to do with the asylum system.
Y
yeahyepyes 5 months ago