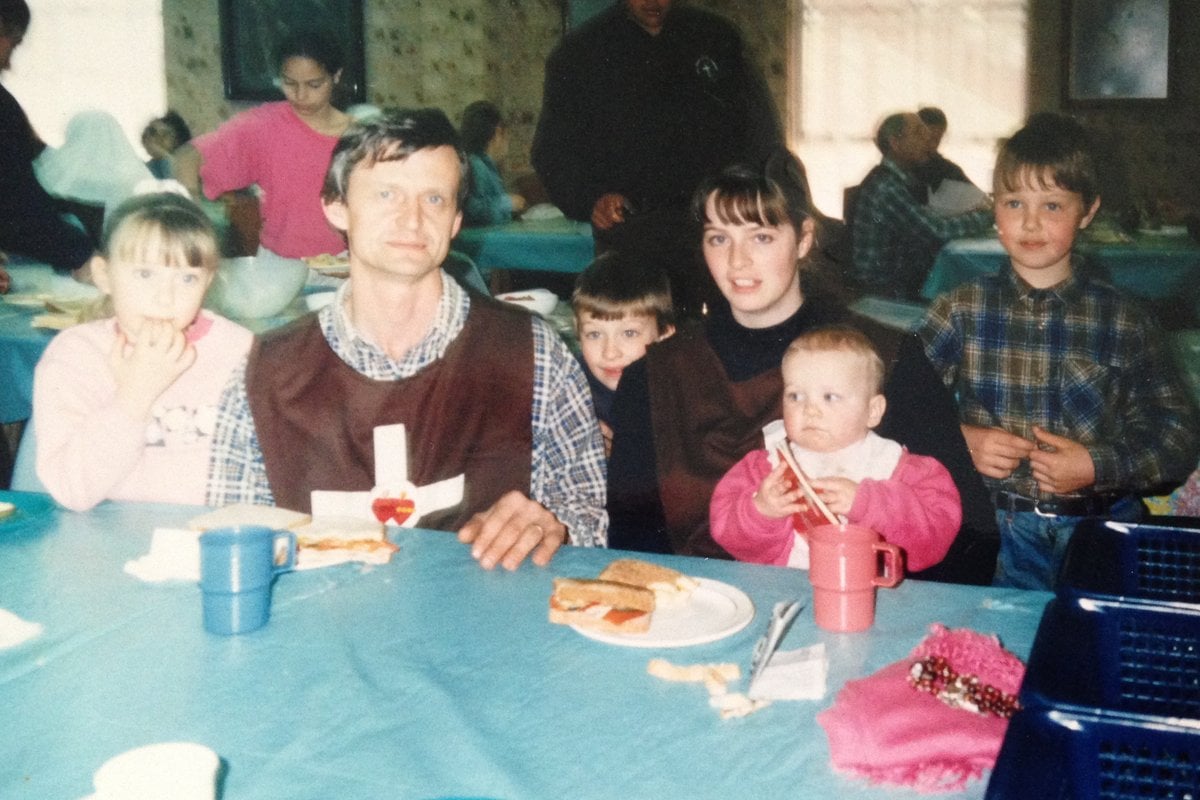 The end of the world is near. Days are filled with preparations. Fear is high, as eternal blackness is nigh.

Women need to be covered from their neck to their elbows and ankles. Their clothing must be loose so that men cannot see the shape of a woman’s body and be tempted to commit a sin. Women need to learn how to make bread from scratch and how to sew clothes - to be self-sufficient when the apocalypse arrives on their doorstep.

The women prepare the menu and meals for all community members. They serve and clean-up afterwards, too.

There is no contraception. Women should have as many babies as possible. If you look around, there are pregnant 16-year-olds expecting ‘mystical’ babies.

The man is the head of the house. He is the breadwinner, working at the local convenience store for minimum wage.

There is mandatory mass and prayers three times a day. There is a strict hierarchy that includes a leader, an inner circle, and princesses and queens.

Welcome to The Order of St Charbel. On a “sacred” property in Nowra, nestled in NSW’s South Coast, 200 people live in a doomsday cult.

One of them was Claire Ashman.

Ms Ashman had joined the fringe religious group, who claim to be part of the Roman Catholic Church, in February 1997.

It was her husband, whom she had married when she was 19 years old, who forced her to move there. He told her he was attracted to the lifestyle of living in a small community. He was also interested in end-of-the-world prophecies.

“Since he was the breadwinner and controlled all the money, he literally sold our house in Melbourne from underneath us and we moved up to Nowra,” Ms Ashman explains.

“I thought, I'll sacrifice myself for my husband for a few years and then he'll see the futility of it and then we'll move on. But that wasn't the case.” 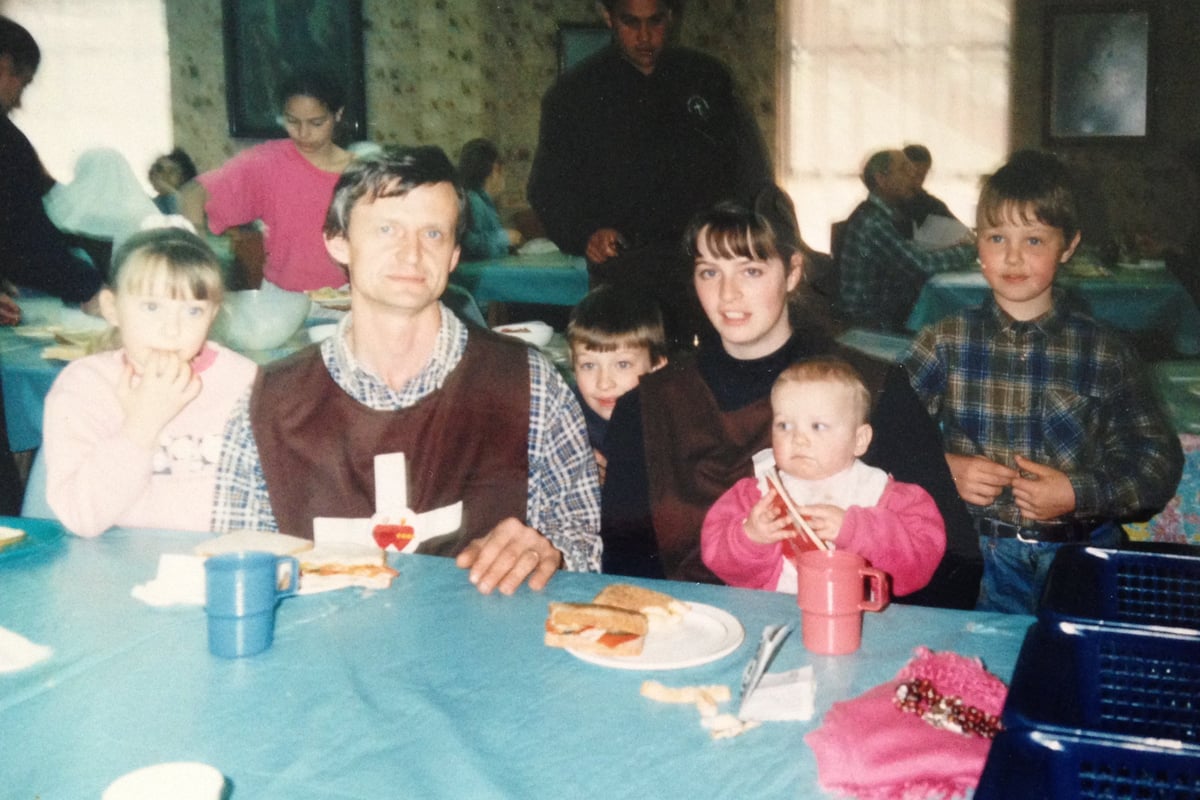 Claire Ashman with her then-husband and four of their children. Image: Supplied.

The concept of a strict religious group was not completely foreign for Ms Ashman. She had been brought up in Society of Saint Pius X (SSPX), a sect which was a breakaway from the Catholic Church.

In the strict religion, Ms Ashman was taught that women are submissive and obedient. They don’t aim for higher education and they sacrifice their lives for their husbands. She had left that group, but it wasn’t long before she was forced into joining another one.

So at 27 years old and with four children - the eldest of whom was seven years old - Ms Ashman joined the now-infamous Order of St Charbel.

The group was founded and led by William Kamm, who claimed he was the first person in history who could ask the Virgin Mary questions and receive answers.

“You could write a letter asking any question that you wanted of the Virgin Mary,” Ms Ashman explains to Mamamia. “The Virgin Mary would give Kamm the answer and he would write it down and give it back to the person. But whatever the answer was, you had to follow it, otherwise you would lose your special graces and any kind of special mission that would be given to you in the new holy era.”

The cult was even worse - even darker and more apocalyptic - than she had anticipated. And she had little choice but to be submissive and suppressed.

“I had no access to any money. I didn't have any friends. I couldn't go anywhere, even if I wanted to.”

It wasn’t until she read a book, The Beautiful Side of Evil, about a religious cult in America, that she began to realise what was happening around her. From the hierarchy to the indoctrination, she knew she was in a cult.

Watch: You Can't Ask That on cults. Post continues below.

After about three years of living on the property, Ms Ashman began having suspicions that their leader, William Kamm, was impregnating young girls.

“They were apparently ‘mystical babies’ but obviously over time, you see that they're not mystical - he's the father.”

“I told my husband that I was horrified and disgusted and didn't want to live there anymore,” Ms Ashman remembers. “He just said William has permission from the Virgin Mary to be able to do this.”

There was, she explains, little she could do except protect her own daughters.

Whilst in the cult, Ms Ashman had four more kids - making her the mother of eight children. They all attended a primary school on the property, where they learnt that the world was going to be decimated.

When the kids returned home, they knew their house had been prepared for doomsday.

“You're just constantly fearing some new prophecy. You're hoarding food and clothing and blankets and making sure that the black plastic fits over everything. It's all prepared and hanging off of the windows so you can just drop it at a moment's notice...

“Surely God does not want us to live like this?” Ms Ashman remembers constantly asking herself.

In 2005, Kamm was convicted with aggravated sexual assault of a 15-year-old girl in 1993, and sentenced to five and a half years in jail. 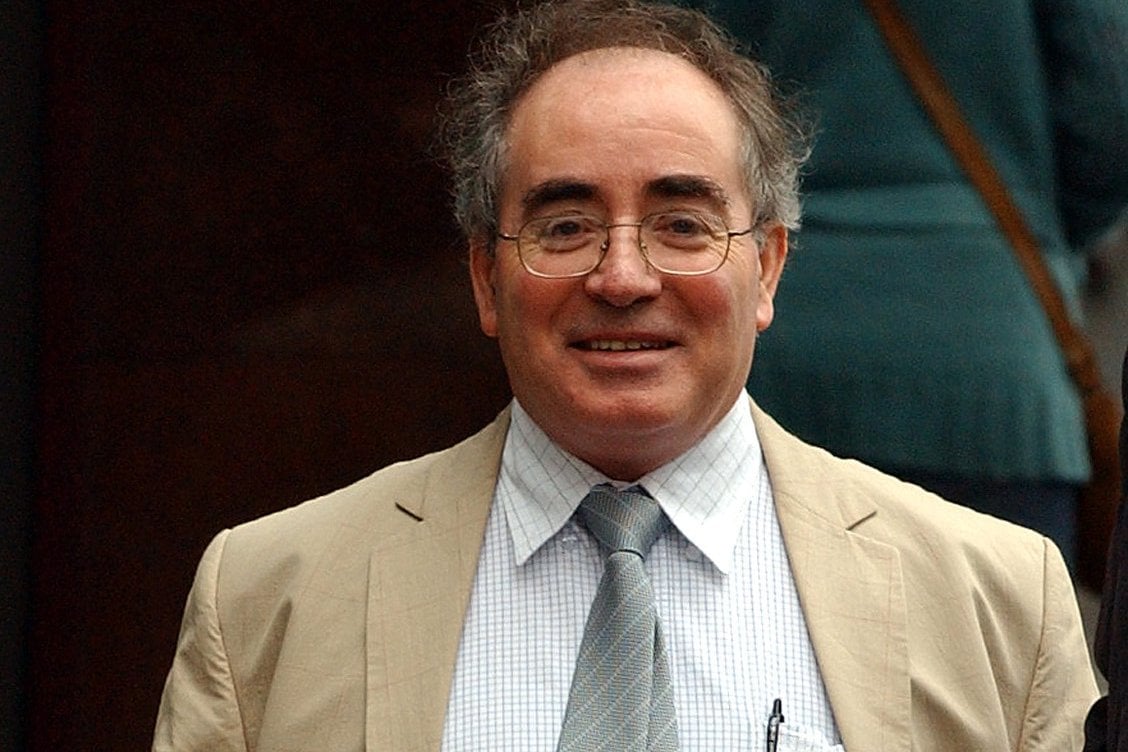 William Kamm in 2005 after he was convicted of aggravated sexual assault. Image: AAP.

“You got what you deserved. Hopefully they’ll take you to jail,” Ms Ashman remembers thinking when she learnt of his arrest.

Kamm’s conviction saw the closure of the cult.

For Ms Ashman, this wasn’t the end she was preparing for but the one she had been hoping for.

But returning to the ‘outside world’ wasn’t simple.

At 38 years old, Ms Ashman needed to learn how to set up a bank account for the first time and to wear ‘normal’ clothes.

It took several years for her to come to terms with what she had been through and to find her feet back in normal life.

Now, she often shares her story to reduce the shame and stigma many people who have escaped cults feel. At Vivid Sydney - scheduled between September and October - she will share more of her story at the Sects, Lies & Cults panel, alongside other Australian cult survivors.

Meanwhile, in April, paedophile William Kamm won a legal battle to return to his “sacred” land in Nowra.

Reply
Upvote
1 upvotes
It's no coincidence that cults like these focus on the "submission" part for wives while completely ignoring the very next verses in the same part of the Bible that tells husbands that they need to love their wife "just as Christ loved the church" - unselfishly and sacrificially - as well as the bit that immediately precedes it which explicitly says "Submit to one another".
G
gu3st a year ago

Reply
Upvote
3 upvotes
It doesn't ever seem to matter how outwardly puritanical these cults are, there is always a leader/leadership group abusing their power sexually.
C
cat a year ago

Reply
Upvote
1 upvotes
@gu3st why else would you start a cult? The only other incentive is money, but then we call it an MLM.
G
gu3st a year ago

Reply
Upvote
2 upvotes
@cat Or a cryptocurrency.
G
gypsy a year ago