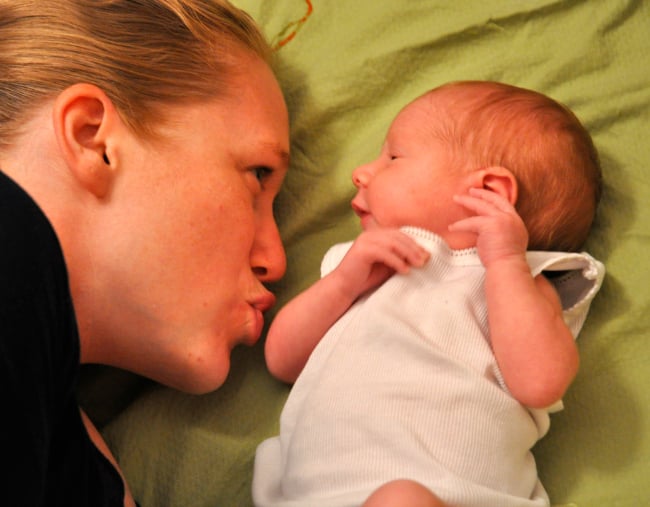 I know about the photos.

It’s been seven years this week, and ever-helpful Facebook is reminding me of my first months as a mother. And those photos show an idyllic time.

There’s Matilda in that purple cotton singlet you love so much, fast asleep on her daddy’s chest, a tiny bare arm flung above her head. There she is again curled into a papoose on his chest, walking the cliff path to ease her off to sleep. Wow. What an amazing dad.

There’s the family out to brunch, the pram barely in frame, hot coffees and smashed eggs, newspapers on the table. That photo has a lot to say. Look at us, doing all the things! Look at us, everything’s just the same! Look at us, living the dream!

And there you are smiling at the camera, newborn Matilda in your arms. There’s a look on your face that’s familiar. A textbook study of adoration. It’s beautiful to see, the way you are looking at your baby. You can see the circles under your eyes and no fear visible behind them.

But I know the truth about the photos.

I know about all the photos you didn’t take. The scenes of early motherhood you didn’t capture. The ones you didn’t parade on social media. The ones that wouldn’t have garnered a flood of likes and comments and heart-eyed emojis.

Like the one of you sitting up in bed at night, sobbing, breasts exposed, nipples raw and bleeding.

The one of that brunch, the coffee cold, the eggs congealed, untouched on their hipster slates, the baby squalling, other diners scowling.

I know about the photos and it’s okay.

Because this time is brutal.

They should have taken you by the shoulders and shaken you. They should have encouraged you to get a tattoo on the inside of your wrist that reads: Your name is Holly Wainwright. You live in Sydney, Australia. You have a functioning brain. You’ve done a lot of stuff. People generally think you’re all right. You will survive this.

You’re doing a pretty good job of staying optimistic in the mornings but the late afternoons are killing you. As the realisation dawns that another night is coming, and for you there will be no rest, you’re finding it hard to keep it together. There’s a welling sense of dread.

For you right now, ‘night’ just means doing the same thing you’ve been doing all day but quietly, in the dark, with more anxiety.

Holly Wainwright, Kate De Brito and Jacqueline Lunn answer - questions you were too scared to ask about giving birth. Post continues after video.

So let’s talk about that part, the anxious part. Hopefully, I can help with that.

You don’t realise this yet, but you’re going to be a great mother.

You already are, and you will continue to be. Not because your baby sleeps through the night (I really don’t want to alarm you, or encourage you to postpone marital relations indefinitely, but if you think this baby is a bad sleeper, wait until you meet your next one), or because your kids always look immaculate, or because you mush your own organic baby food (you will manage that a total of about three times during two different weening phases, GO YOU).

It’s not because you are the woman who will finally master work-life balance, or the one who never, ever hands her toddler the phone when you’re talking to the woman in the post office.

Nope. That’s not you.

But you are a good mum, because that little peach-person loves you to pieces. And you do her. You’re only going to love each other more, and more, and more. And with that locked in, the rest is really just window dressing.

See what I did there, Old Me? I threw you a bone. I gave you a glimmer of hope to help you through the twilight zone of this strange opposite world where there is no day or night, and where you doubt you will ever feel human again.

What’s the point of a letter from the future unless it’s actually going to be useful? Let me tell you what I’ve learned...

Not all new mothers are suited to their Mothers’ Group. And according to perinatal psychologist Kirsten Bouse, that’s absolutely fine. Holly Wainwright and Christie Hayes discuss on the Year One podcast. Post continues after audio.

I know that involves brushing your hair and putting on clothes that aren’t pyjama pants, but, truly, it’s the best thing you can do for yourself and for Matilda.

The Best. At mothers’ group you will learn, almost immediately, that everyone is in exactly the same mess you are. No one’s baby is sleeping through the night. (I’m actually laughing as I write that, as if that’s actually a possibility in the first six weeks, as if anyone should have ever suggested that it might be, you know, A Thing.)

None of those women have any idea why your baby suddenly just starts crying at 4 p.m. for no reason at all. They are also clueless about why she just keeps whingeing until 6 p.m. and refuses to be put down, something that is completely incompatible with the other things you’re meant to be doing at that time of day, like, you know, making a meal. (I’m laughing again.)

These excellent women will become your friends. They will save your sanity, over and over. Together, you will try everything and exchange all of the information. Day sleeps – why are they so impossible? Is there such a thing as ‘bedtime’ for a newborn?

Should you rock and pat, or just shush? Should you bounce up and down on a fitness ball? Should you drive around and around at 2 a.m. when you’ve exhausted all other options? None of you have any idea, but having people to text swear words to at 11 p.m. will make you feel a whole lot better.

So brush your hair and get out the door.

Stop tiptoeing around at night.

You know how Matilda wakes up every couple of hours and you carry her carefully away from where she’s sleeping next to your bed and into her ‘nursery’ where you change her and feed her and basically make sure that she goes from really, really sleepy to really, really awake?

Stop doing that. Just stop. You claim you don’t want to wake Brent, but it’s a ridiculous, passive-aggressive farce. He can hear her crying. He can hear you thudding around. You’re not fooling anyone. Just do everything right there, in your bed, preferably without putting your feet on the floor.

Yes, he has to go to work in the morning. So what? So do you. This baby business isn’t work? This is a team sport. You’re lucky enough to be in a team of three so make the most of it. Brent can learn to change nappies in the dark too, you know. It’s not a skill that comes with having a uterus.

I know you are spitting at Future Me right now.

I know you just ripped this missive from the future into tiny shreds and added it to the bonfire of your workplace, but seriously, if you could see the next seven years you would know how unique
this very ordinary experience is.

That baby is seven years old now. She’s tall and strong, and she likes to sleep next to you, she likes to lie there and tell you all her stories, hear all of yours. She’s funny, and she’s kind and brave.

She’s big sister to a whirlwind and she adores her dad. She doesn’t give a shit about you watching Mad Men while you breastfed. She doesn’t remember that you flayed your nipples for her. She still doesn’t really let you sit and enjoy hot coffee and smashed eggs at a cafe.

But she adores you.

Holly, that overwhelming fear welling inside you is absolutely correct: Life is never going to be the same again. It’s going to be way, way better than that. So cry. Cry it out.

Because it’s brutal. I know.

Holly is going to be celebrating The Motherhood alongside Jamila, Sarah Harris, Kumi Taguchi and Suzi Bayes-Morton at a fab event taking place at RJ Wallace Theatre, Waverley on Tuesday 5th June, info and tickets here.

Well said Holly, you have taken me right back to my own experience as a first time mum. This is a book I'd like to read!
It is a shame though how it's being put in the same category by another one being released by a certain former WAG/insta celeb.

I'm a first time mum-to-be and I have this book as well as the one you are referring to. I haven't read either yet but I am looking forward to reading both.