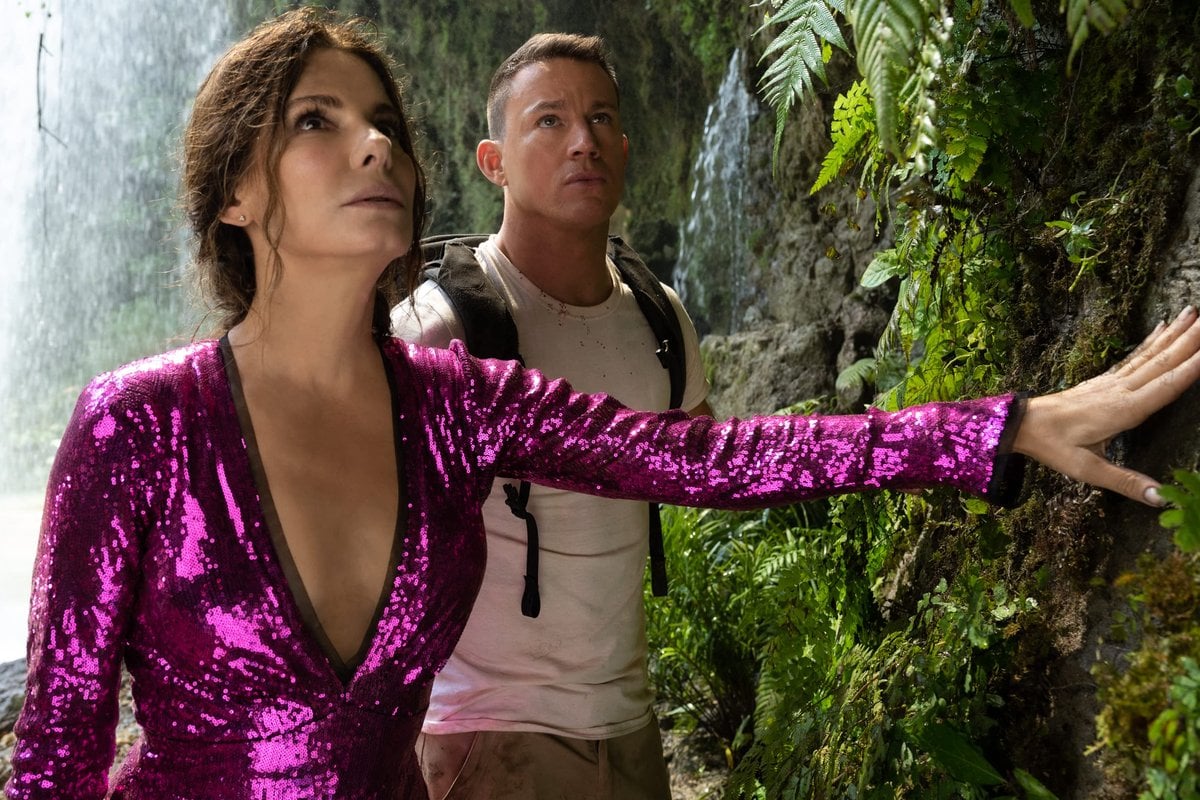 2022 feels like a year when everything old is new again.

After two years of a pandemic, civil unrest, and the increasing threat of climate change, we've well and truly sunk into the comfort of nostalgia.

We're looking back at the last three decades with rose-tinted glasses on. We want to remember the good ole' days - the 90s and early 2000s - when everything seemed easier and less... apocalyptic. Obviously those eras had their own fair share of problems, but don't tell our low-slung jeans, crop tops and increasingly skinny eyebrows that.

And definitely don't tell Jennifer Lopez and Ben Affleck, who have taken reliving the early noughties to a whole new level.

Watch the trailer for The Lost City. Post continues below.

It was only a matter of time until this nostalgia and thirst for 'how things used to be' would start infiltrating our local multiplexes.

First, there was Marry Me, a rom-com box office hit starring the aforementioned Jennifer Lopez as a fictionalised version of herself, who falls in love with an awkward maths teacher, played by the goofy yet loveable Owen Wilson.

While the critics were harsh (not this one, I bloody loved it) about this cheese-laden rom-com which would feel more at home in 2006 than 2022, the box office numbers don't lie. People loved it. We need this kind of escapism in our lives.

And the film industry is delivering it. Not only have we welcomed a reboot of the Ghostbusters franchise earlier this year, but later in the year, we'll see a return to the original Jurassic Park franchise. Because life, uh, finds a way.

Everything old is new again, especially if it's guaranteed to draw a crowd.

And today The Lost City, a movie that can best be described as Indiana Jones meets any of the Sandra Bullock rom-coms from the early noughties, hits cinemas.

The film marks a return to the celebrity buddy up action rom-com, think Miss Congeniality and Fool's Gold, which started to die off in the late noughties, and were declared legally dead around 2016 when Melissa McCarthy decided to concentrate on more serious roles.

The film follows the story of Loretta Sage (Bullock) a widowed novelist, who is struggling to finish the latest instalment in her series of 'hot throbbing members' romance books with an archaeological twist. Channing Tatum and his... body star alongside Bullock as Dash, the Fabio-inspired model who graces the covers of all of Loretta's books.

Loretta, still mourning the loss of her archaeologist husband and hating the steamy romance world she's created, has no idea that Dash has a big, stinking crush on her, and hopes that one day she'll see the real man underneath the muscles and the long, blonde wig.

After a fan convention, Loretta is kidnapped by an evil British media heir named Abigail Fairfax ("It's a gender-neutral name!") played by Daniel Radcliffe, who hopes she'll be the one person who can decode an ancient message and find the location of some lost treasure known as the Crown of Fire.

But what the evil British media heir didn't bank on was a himbo with nothing left to lose, storming into the jungle to save the love of his life and to prove that he can be a hero in real life. And also bringing Brad Pitt along for the ride. 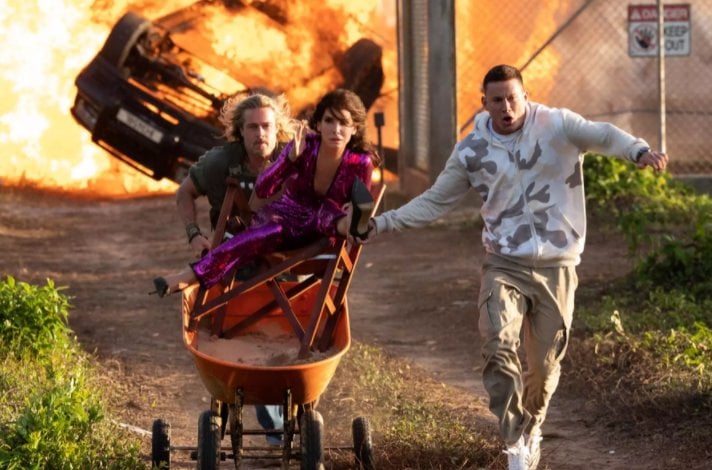 What follows is about 90 minutes of Bullock, in a sparkly purple playsuit, and Tatum, sans wig, walking through the jungle trying to escape the evil British media heir's henchmen and slowly falling in love.

It's a ridiculous movie and everyone involved including directing duo Adam and Aaron Nee (Band of Robbers) knows it.

The plot is silly, and at times unbelievable, like the time Bullock easily sails up a cliff in the purple playsuit and heeled boots, narrowing escaping gun fire.

But honestly, we don't need this movie to make a lot of sense, or be rooted in reality.

We just need the beautiful people to go on a big adventure, learn something about themselves, and then fall in love.

Daniel Radcliffe brings real 'Kendall Roy studied archaeology at university' energy to his role as the token villain and the set is ridiculous enough to let viewers know that every single person involved in the movie is in on the joke.

Plus, did I mention there's a Brad Pitt cameo?

The Lost City is a big, silly movie, and you'll love every second of it.

The Lost City is in cinemas across Australia from April 14.