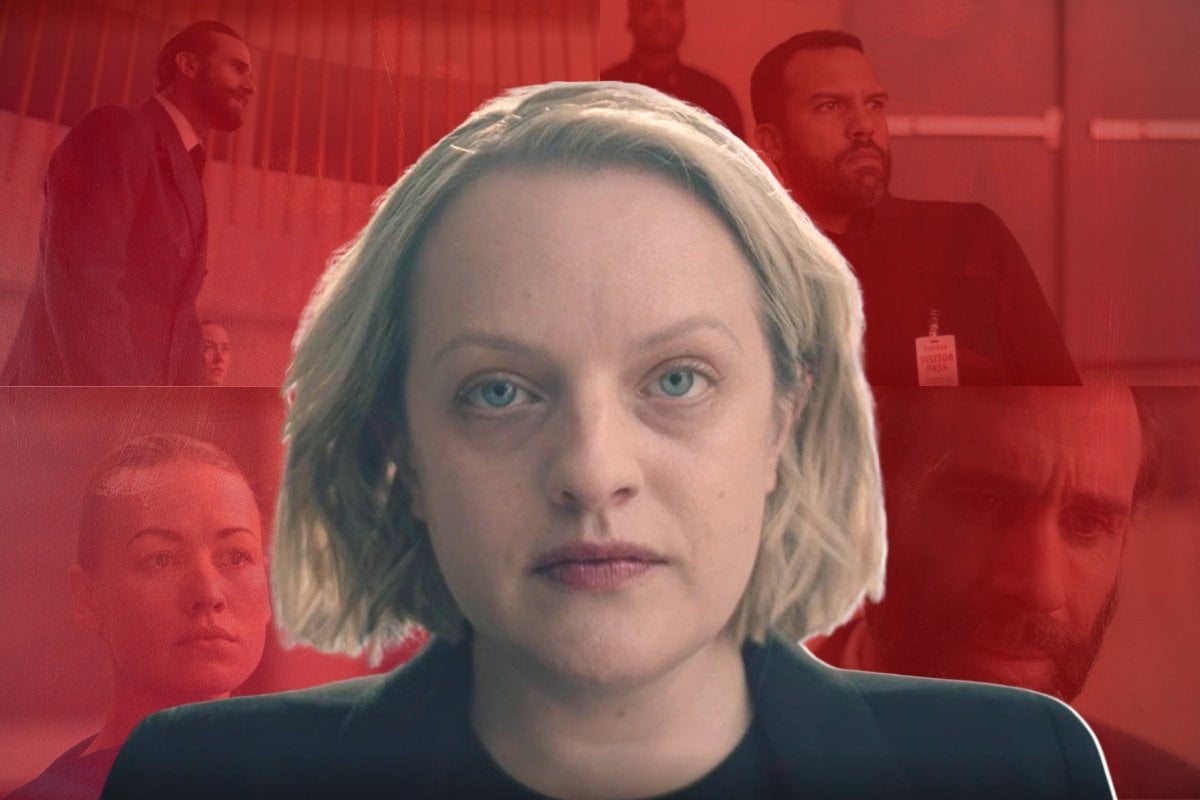 June is cutting her own hair.

The trauma of seven years in Gilead is beyond comprehension, and would make for the worst possible hairdresser small talk, but imagine how good a head massage would feel after all this time. I'm just saying.

She and her chic new bob are at a group therapy session for Handmaids. Moira is leading the discussion, which doesn't make much sense because she has her own trauma and is not exactly... a qualified psychologist, but alas.

June's not exactly fitting in, because she's unapologetically pissed off at what they've all been through.

Moira encourages the group to embrace healing and their new 'freedom', while we know June is still very much keen to burn Gilead the f**k down.

It's been at least a few weeks since she arrived in Canada, because the other women are asking her about Fred's confirmation of charges hearing, tomorrow. Is she scared? Worried? Nervous? 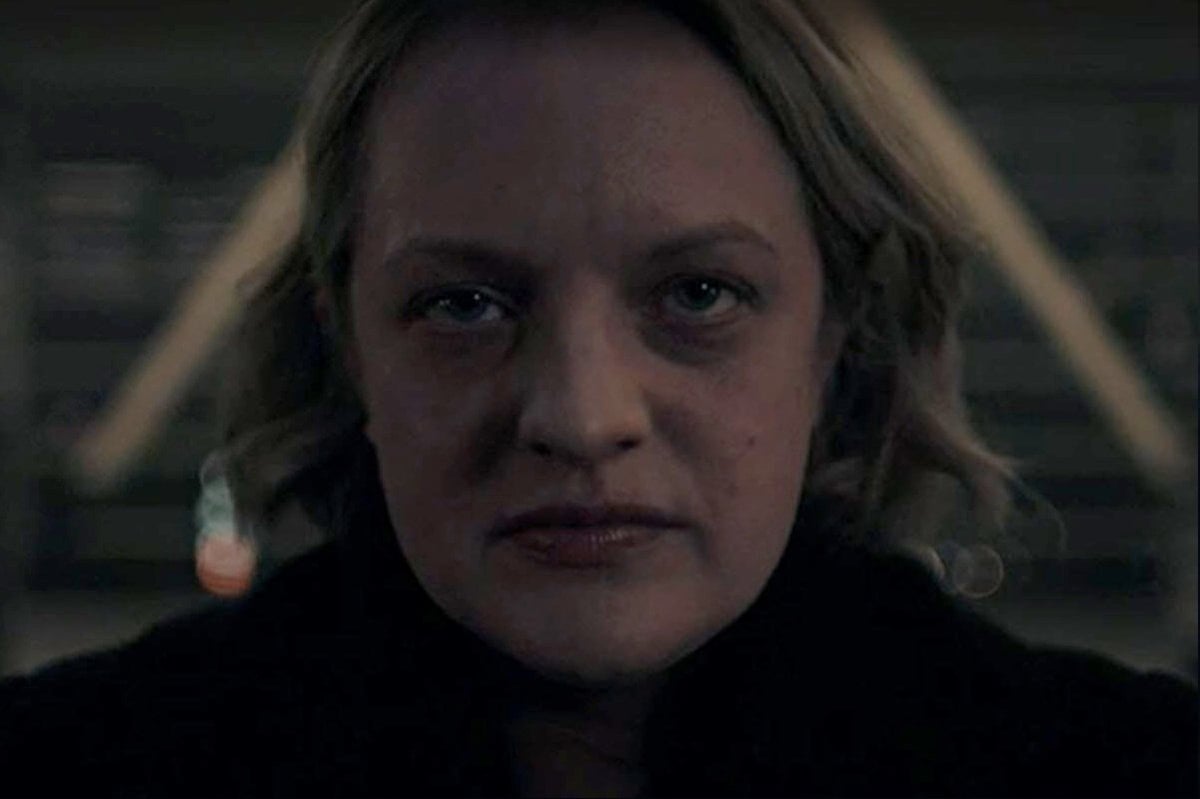 I have to brighten all these photos because otherwise you can't see a damn thing!! It's very inconvenient!! Image: SBS.

At the end of the session, June and Moira are talking about 1. how June is very important and has a security detail and 2. how she's not onboard with the group's 'forgiveness' crap.

There's a commotion nearby and a woman chasing Emily. Excuse me, lady, who do you think you are???

She's asking if Emily is well, which seems like a damn stupid thing to ask a former tortured handmaid, and Emily is straight up like 'leave me the hell alone'.

She hands over her contact information, which Emily refuses to accept and leaves. June picks up the piece of paper, because of course.

At dinner that night with Emily, Moira, and Luke, June encourages Emily to tell them who she was. Emily is uncomfortable, but says her name is Aunt Irene, who she knew from her first posting as a Handmaid in another district. 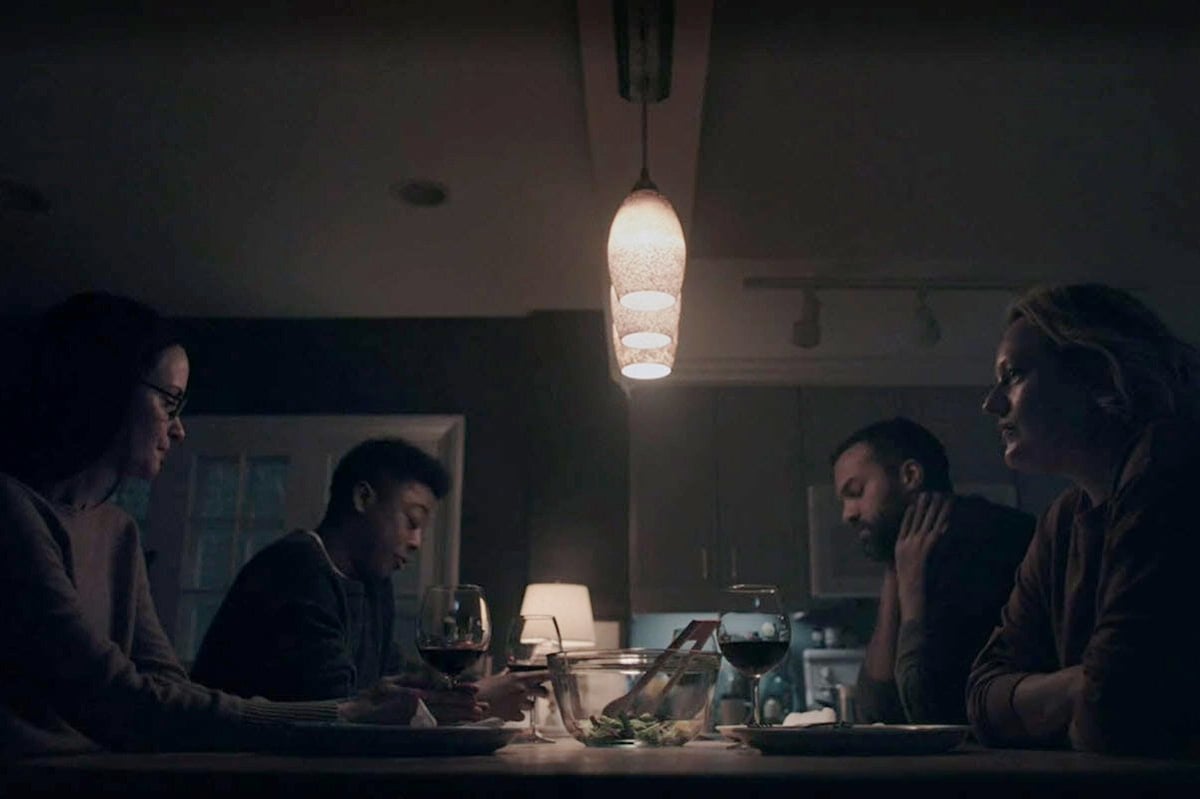 June encourages Emily to confront her, and Emily says they can't all be like June.

Afterwards, June and Luke wash the dishes together... awkwardly. June has told Luke she doesn't want him to attend her testimony against Fred.

When Moira walks in, June leaves and Luke vents, saying June is like a stranger to him. June overhears while standing outside the kitchen.

Side note: Can June maybe switch on a lightbulb when she enters a room? I've been squinting like Donald Trump looking at a solar eclipse for the entire episode so far.

Over at the Canadian day spa/prison, Serena is much more pregnant than she was last time we saw her, covered in June's spit and rocking back and forth on the floor.

Unfortunately, Fred persuades her to show a united front and join him at court tomorrow - dressed in teal. Yuck.

In Gilead, Aunt Lydia is watching over a new group of Handmaids and having a terrible time because they're not very good at cleaning floors. After seeing other aunts gossiping - definitely about her - she lashes out, tasering not only a Handmaid but also Aunt Ruth. Jesus, get it together!

It's the next day, and June enters the court.

Despite June's request that he not watch her testimony, Luke turns up with Mr Coconuts and Treason, determined to understand the breadth of what she went through.

What follows is a seven-minute recap of what June has faced across the first three seasons, spanning seven minutes of incredible, devastating testimony. 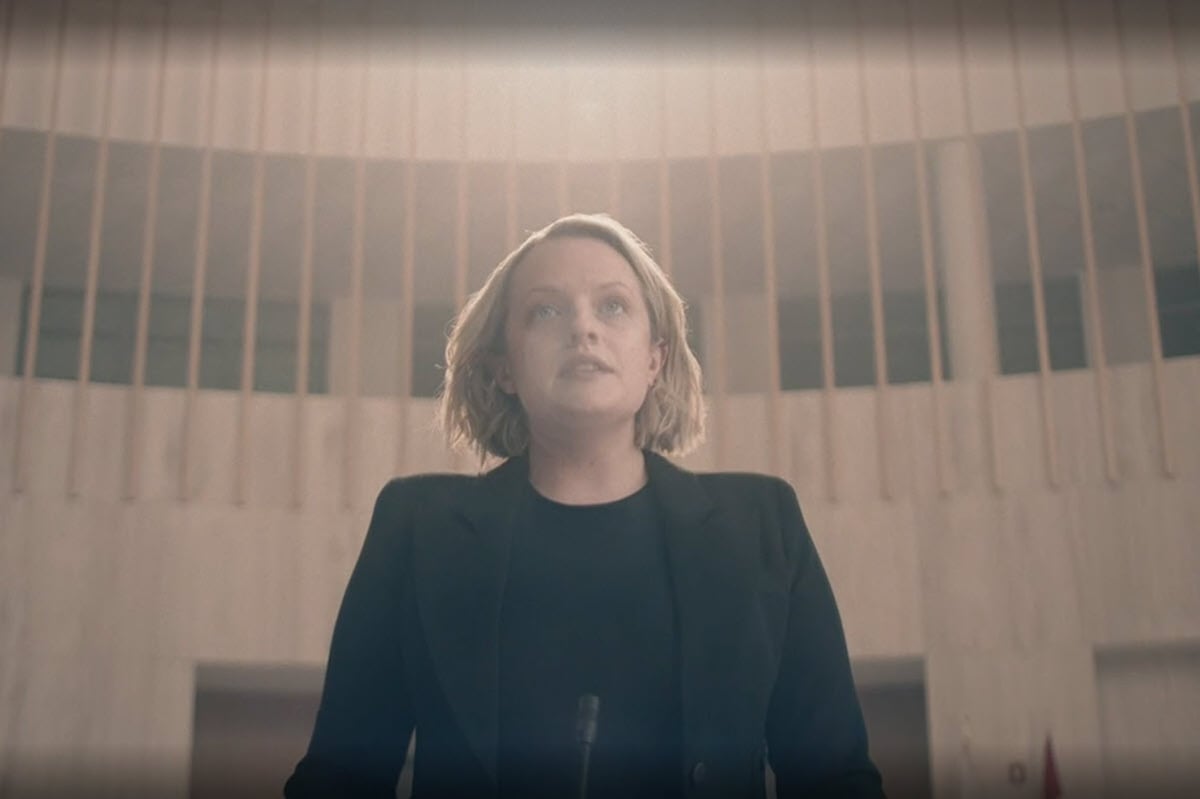 It's perfectly done. Her tone is emotional but in control, her words are factual but scathing and the camera slowly centres on her face, leaving her to stare directly into the camera as she speaks on behalf of all the women who cannot.

Anyone else notice she's still been wearing her red Handmaid ear tag this whole time? She's had ample time to get rid of it like she did in season two, but this time she's kept it on. The optics of her standing up in court testifying against her abusers with it feel important. A physical representation of how she they treated her.

She asks the court to confirm the charges against Fred and deliver the maximum possible sentence. For justice.

Next, the Waterfords' defence attorney (a woman, who Fred believes should not be allowed to read or write!) asks her victim-blaming questions:

"You had an affair with a married man, is that correct?"

"Isn't it true Ms Osbourne that you chose to become a Handmaid?"

I understand defence is a crucial part of a legal system, but f**k you, ma'am. 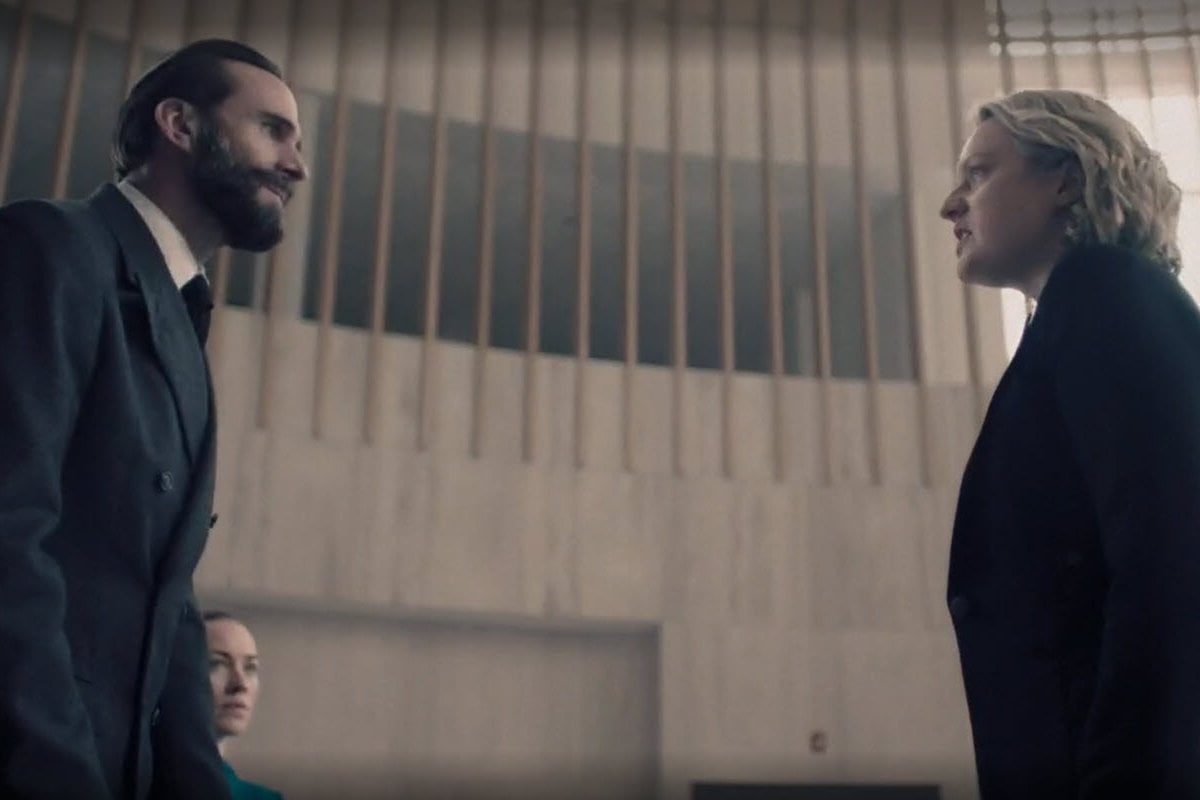 This gives Fred the gall to pipe up, declaring that Gilead's system works, as it is the only country where the birth rate is rising, and Serena's pregnancy is a reward from God.

I HATE HIM SO MUCH.

June approaches him and says "I am done!" before leaving the courtroom, head high. You would think by now Fred would realise it's not a great idea to make June mad, but we all know he's a massive idiot.

What is sadly believable is that Fred's little outburst has earned the Waterfords some new fans. They stand outside the prison, cheering as they leave for another day in court. I hope these people are on a watch list.

In Gilead, Commander Lawrence has noticed Aunt Lydia being a little more brutal than usual, which is... really saying something. 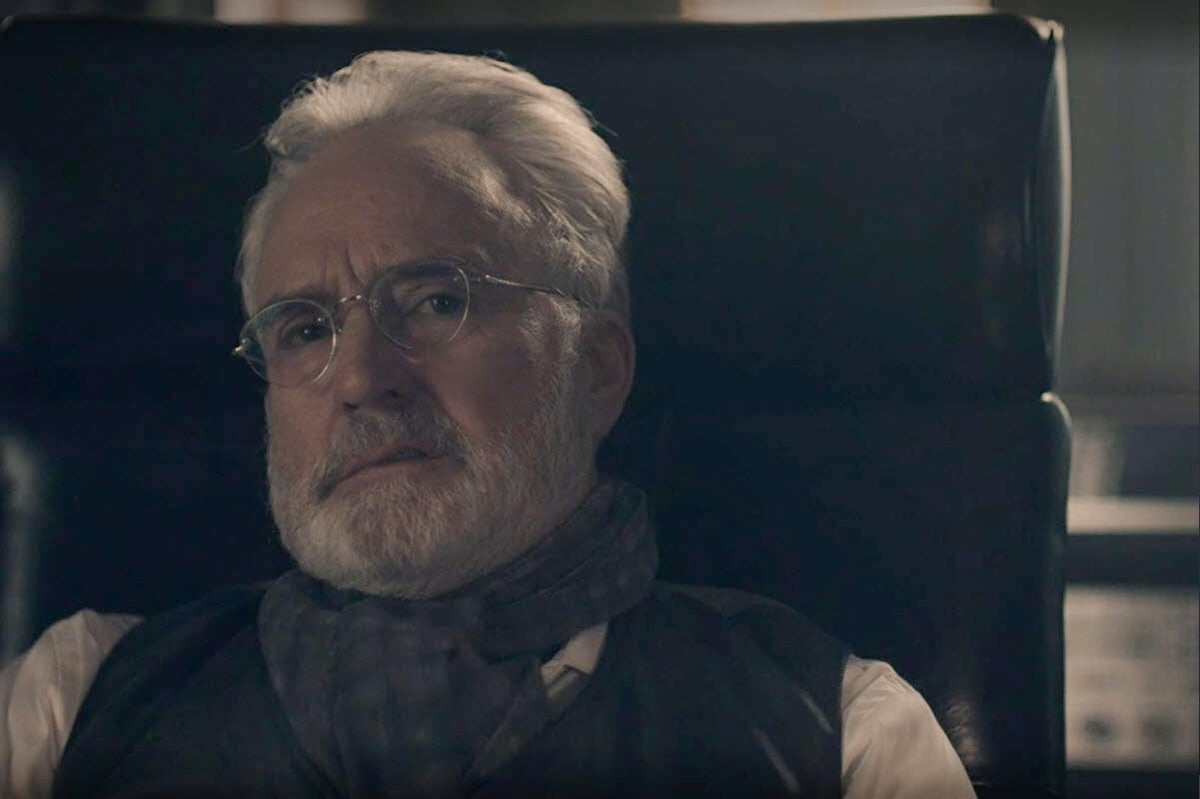 WHAT ARE YOU THINKING??? Image: SBS.

The commanders have obviously seen or heard of June's testimony, because Joseph taunts her by saying June's not only free as a bird, but singing like one too.

Here's hoping his blackmail on the other commanders is solid, because if they've all seen June's speech they'll know he and Eleanor broke the law by not engaging in the monthly state-sanctioned rapes.

He doesn't seem worried, telling Aunt Lydia June won because people like her and "people do not like you". Aunt Lydia is literally the only person who is surprised to hear this. 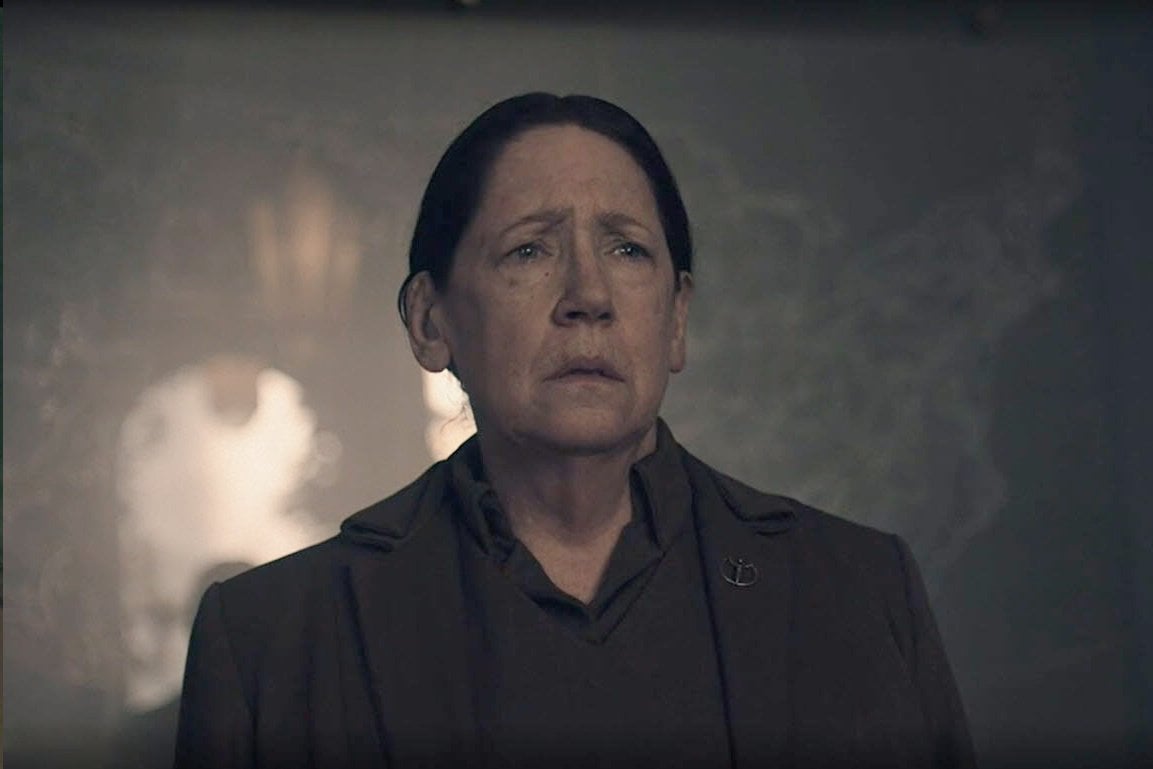 "And here I was thinking I was the most lovable torturer in all the land!" Image: SBS.

He lets her know that Janine has been captured in Chicago (!!!!!!!!!!!!!!) and returned to Boston. He implies she can torture her June-style, but I get the feeling he knows Janine is her soft spot.

Speaking of Aunt Lydia, June's back doing her best impression at Moira's support group. She brings Aunt Irene back for Emily to face her, seating her in the middle of their makeshift 'blame circle'.

Aunt Irene explains that she was the one who informed the Eyes about Emily's Martha girlfriend, leading to the woman's hanging and Emily's mutilation.

The Aunt, selfishly, asks Emily to forgive her. The audacity! Emily tells her there's nothing she can do, and she sobs like a damn coward. 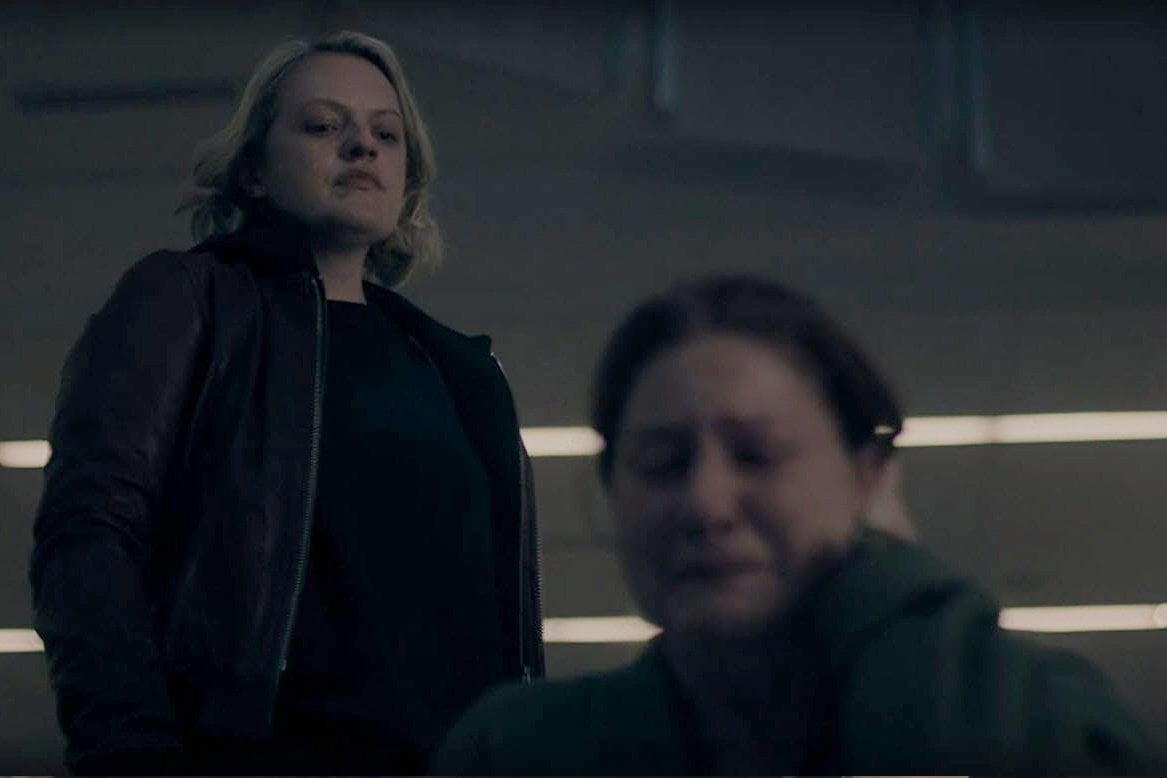 Oh no, sweet Janine is resigned in her Gilead prison cell when Aunt Lydia visits.

I am at once so relieved Janine is alive and devastated that she's back in Boston under the care of Gilead's most taser-happy Aunt.

Janine's joy when she's told June made it to Canada is so pure, but she's not as lucky. She begs not to become a Handmaid again and Aunt Lydia, crying and pulling Janine into a hug, says "whatever are we going to do with you?"

Well, you could turn your increasingly uncomfortable and doubtful thoughts into an actual form of resistance, save Janine and burn Gilead to the ground, just a thought! 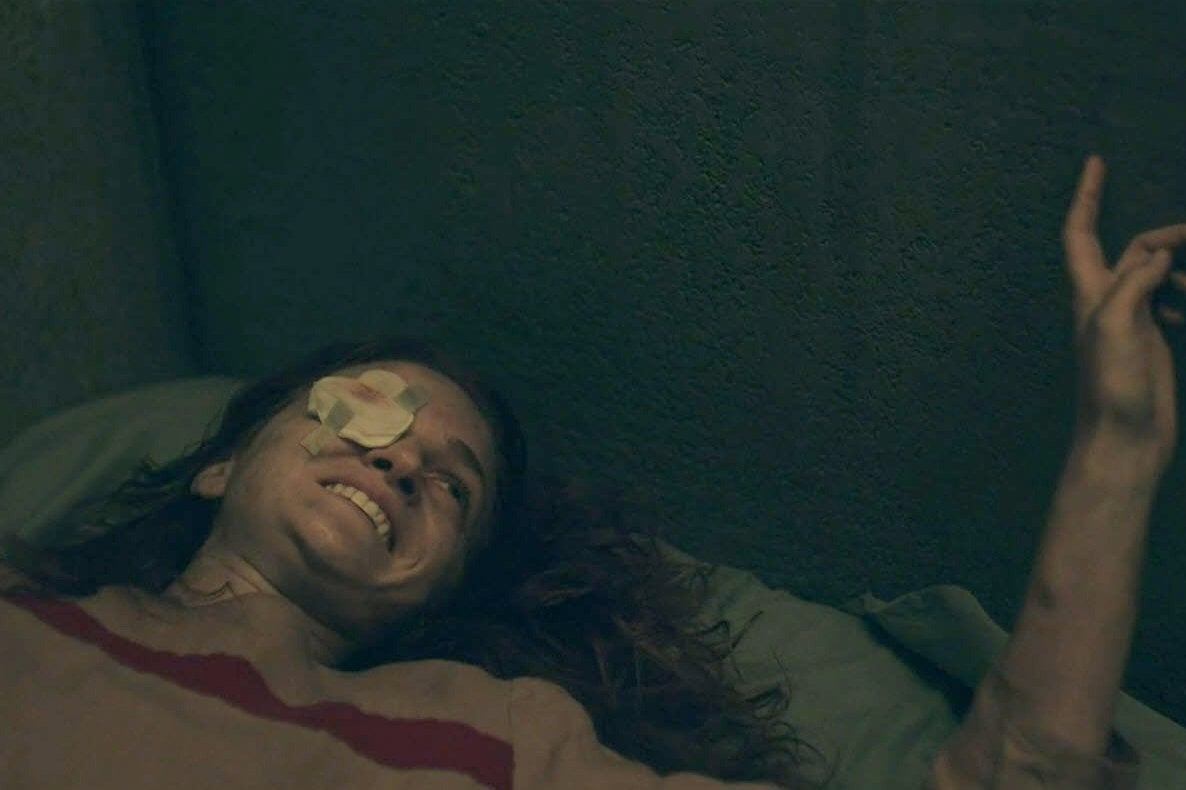 Moira persuades Emily to visit Aunt Irene, using her need for forgiveness to get her to testify against the Waterfords and other Gilead leaders at trials.

Emily drives to her address, only to find emergency services tending to her hanging body. Emily turns around and drives away.

The Handmaid support group gather to discuss the death, and Emily finally shows some of the fury June has been trying to get out of her all episode.

"I feel amazing. I'm glad she's dead. And I hope I had something to do with it," she says. 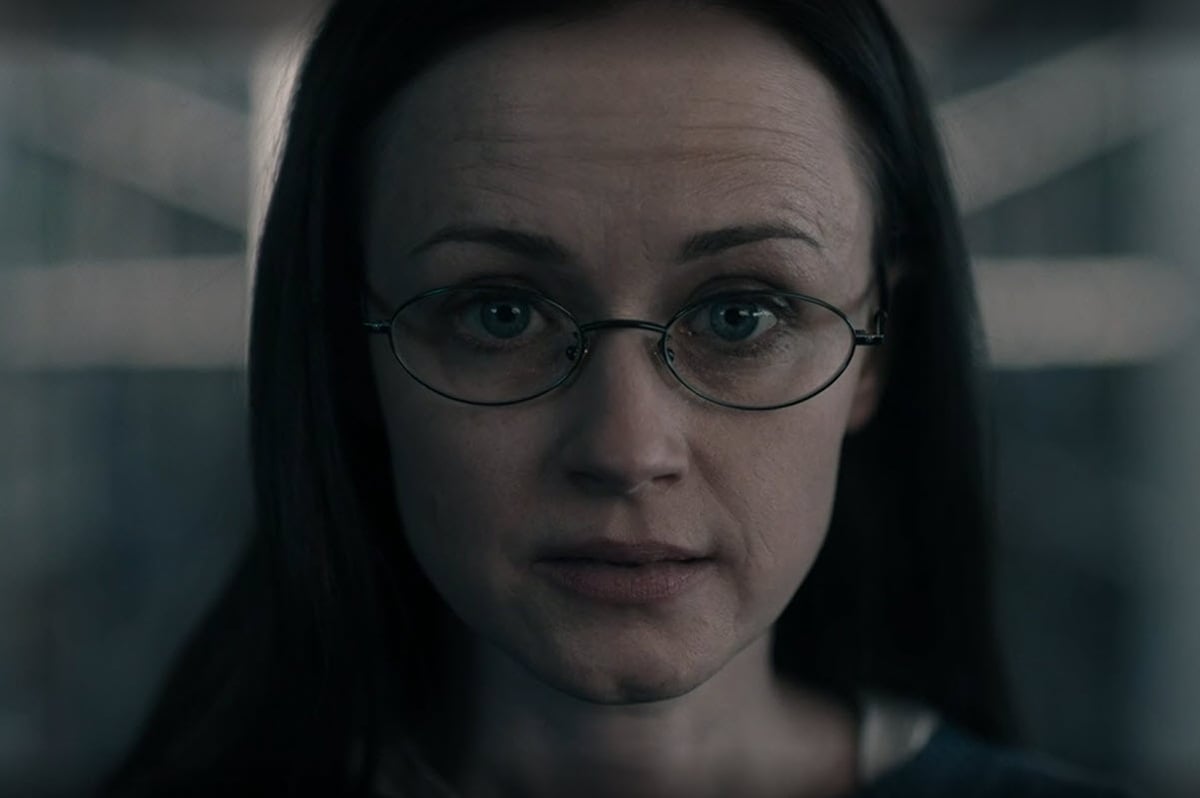 Emboldened, the others talk about the revenge they would like to inflict on their Gilead torturers, horrifying Moira who says they can't live in their anger.

"Why not?" June says. "Why does healing have to be the only goal? Why can't we be as furious as we feel? Don't we have that right?"

Moira ends the meeting, but June calls on the others to stay. And they do.

Things are dark - literally - when June's meant to be 'fitting in' to Canadian life; like at previous group meetings about healing and forgiveness and when (not) talking to Luke. But all the scenes of June in revenge-mode have been lit up, and this one is in broad daylight. 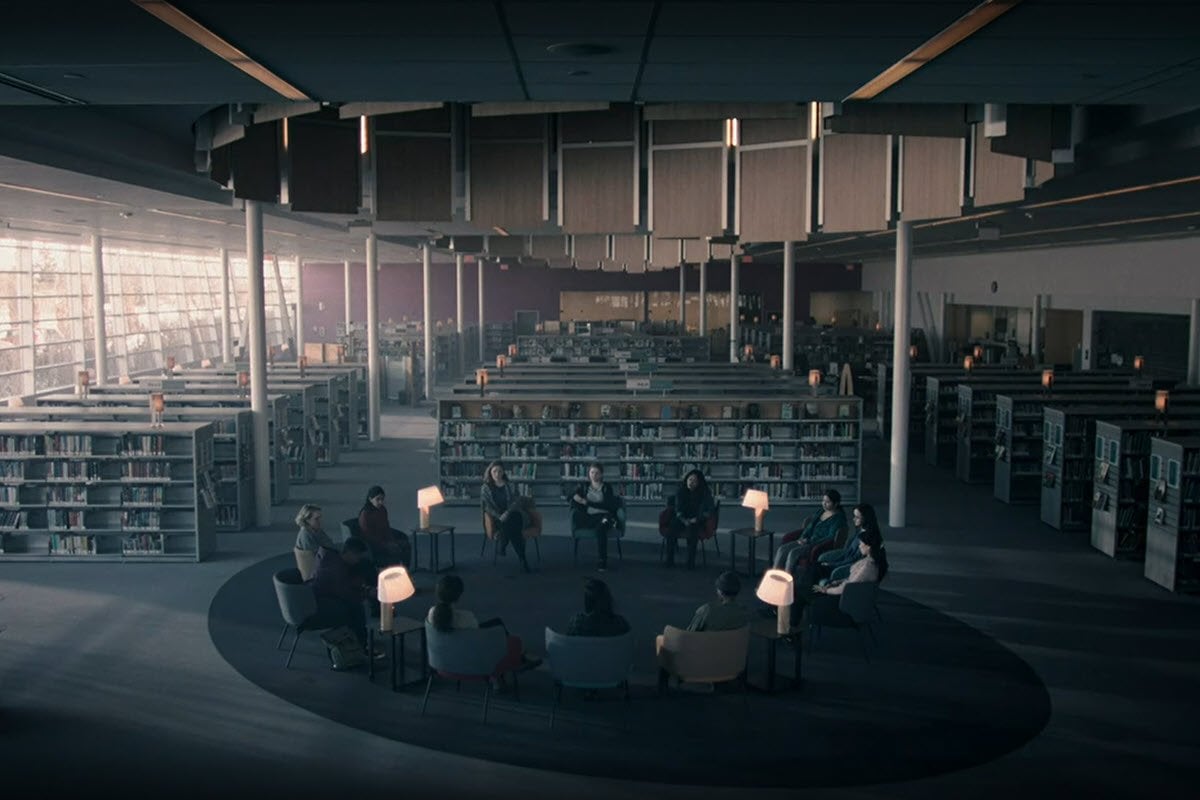 June's path is filled with vengeance, and she wants to bring the other Handmaids with her.

Luke had assumed that once he heard June's testimony, they'd be able to move forward. But that hasn't happened, because he doesn't know everything. There's the matter of Nick and his eyebrows, and also June's lie about the last time she saw Hannah.

Earlier in the episode, she tried to distract him from talking with sex, which he rebuffed. Now, after recruiting an army of equally angry Handmaids, she's returned home to tell him the truth about their daughter.

Gilead have stolen Hannah, not just physically, but mentally as well.

Maybe now Luke will join the army too.

C
clairejulietsheed a year ago

Reply
Upvote
You are such a fabulous writer! Thank you for the witty recap. I’ve not watched this episode yet but am now looking forward to it. I want Luke’s eyebrows - next level.
M
mamamia-user-482898552 a year ago