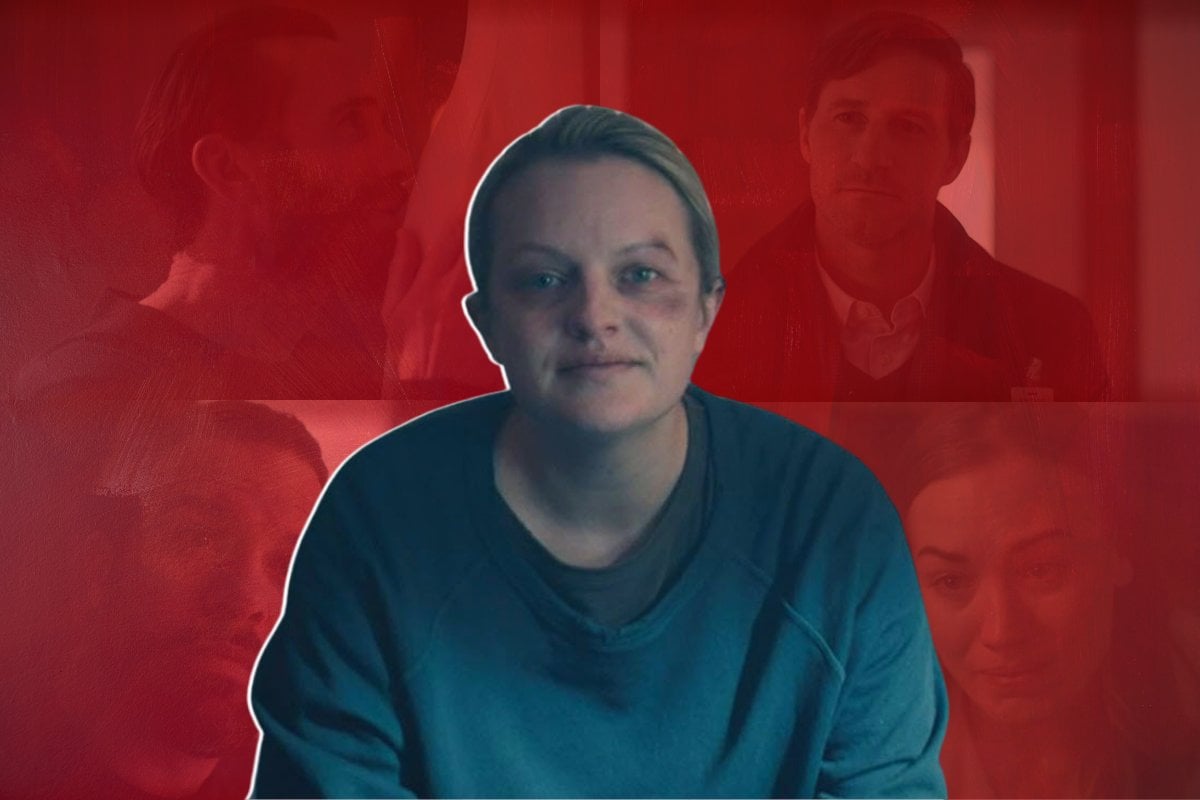 Mr Coconuts and Treason is asking June if she would be tortured if she returns to Gilead.

Sir, no offence, but DUH.

She's been tortured more times than everyone else on TV put together.

Realistically, she should be dead. But without her there is no show, so alas, here she is, formally requesting asylum in Canada.

It's a Blessed damn day, pals.

Etta James' 'At Last' starts playing really loudly as June is taken to the very fancy Fairmont Hotel, now for 'VIP refugees'. Imagine escaping a totalitarian patriarchal theocracy, grabbing a potent drink from the bar and running into Beyonce.

June is so overcome by Canada's... normalcy that she barely registers that Mr Coconuts and Treason and the woman whose grandma buries persimmons are explaining to her how the next few days will work.

There's an extra long closeup of June's face, just so we're clear she's not listening. At least this time it's a side profile. 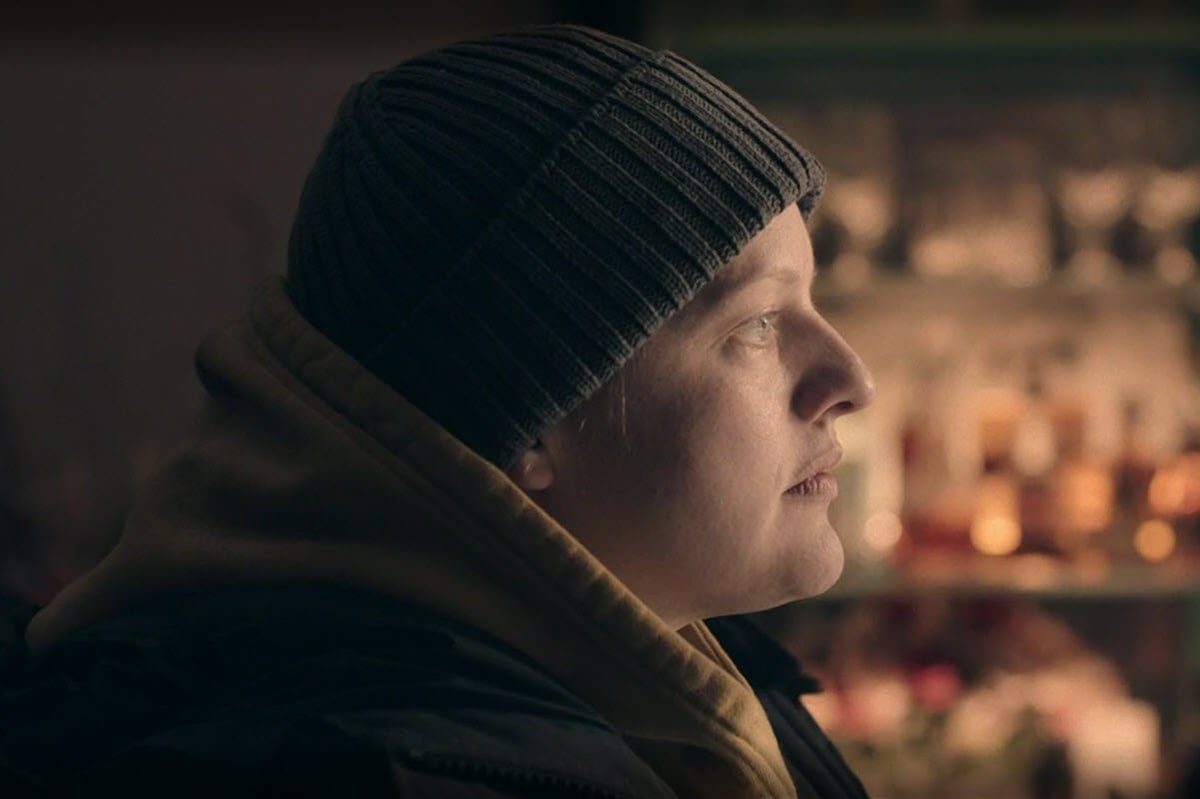 Eventually, she finds herself alone in the hotel room with Luke. It's awkward, but bless him, he's trying so hard.

June takes a shower and there's real shampoo and soap and a waterfall shower head. She hasn't had a shower since being submerged in milk. Imagine how much she stank.

Luke orders food but instead of joining him, June falls asleep. For 17 hours.

The next morning, Luke apologises for not getting June and Hannah out of Gilead.

Instead of telling him about her most recent meeting where Hannah was terrified of her mother, June tells him about seeing her at the country house in season two. Of Hannah accusing them of not trying hard enough to find her, but knowing they love her.

She tells a huge, gigantic lie, sparing him the pain she felt after realising Gilead had changed her daughter. 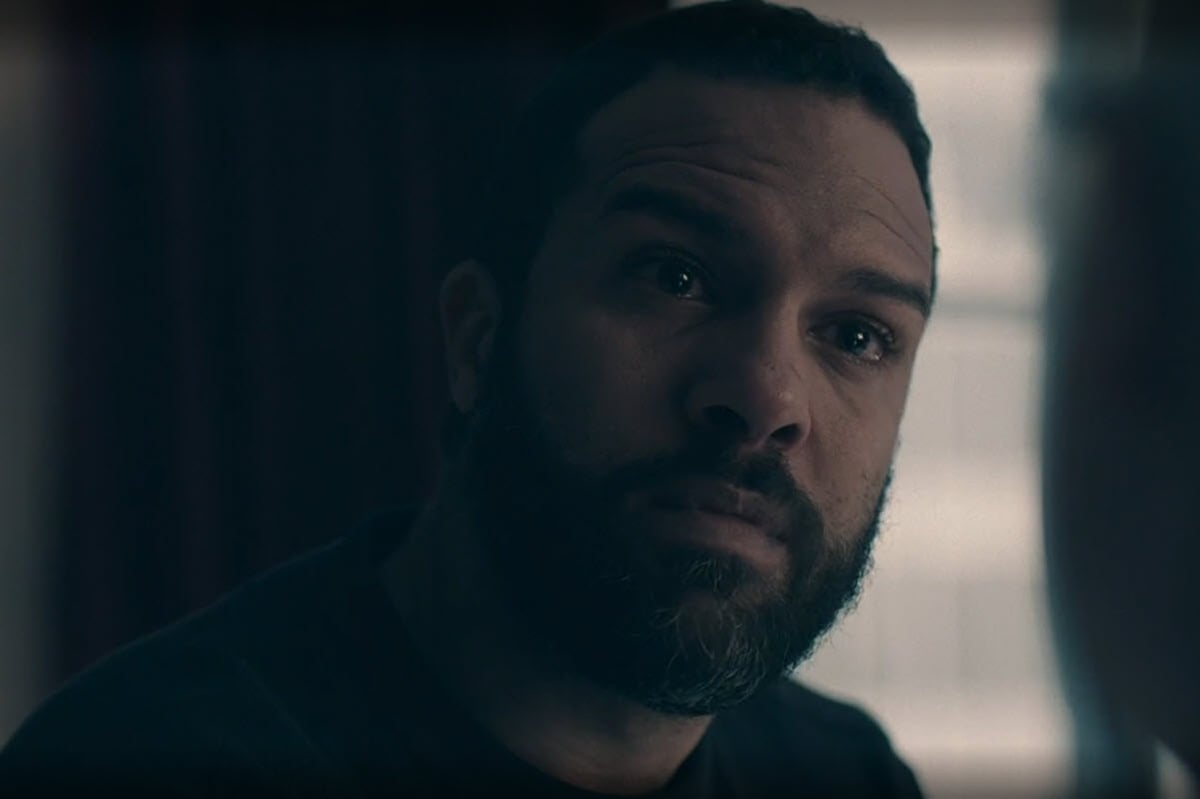 Mr Coconuts and Treason visits to ask June about the Angel Flight, looking for allies within and outside of Gilead. She says her motivation for the flight was to hurt the kidnappers - the Serenas.

I'm pretty sure her motivation was also to save the children from growing up in such a horrible place, but right now she has tunnel vision for taking down Serena. I'm here for it.

Soon after, Luke takes June 'home'. Except, well, nothing is really home, is it?

Toronto is technically now home to June's circle of refugee friends and pieces of the American government, but it's nothing like home is meant to be. Nothing and no one is the same anymore. I mean, June is barely even June.

At Luke and Moira's house, she sees Emily and finally, Nichole. 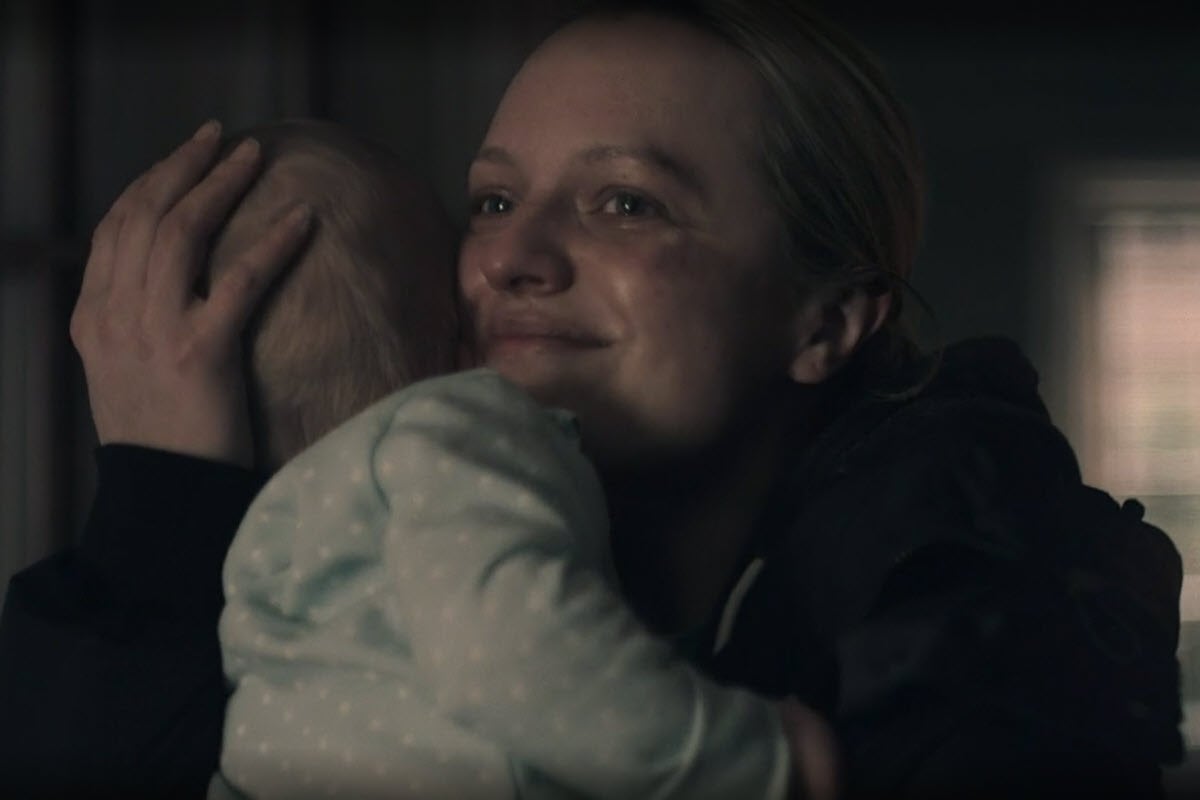 When will we know if Nichole inherited her dad's glorious eyebrows?? Image: SBS.

Later that night, she tells the baby that her "first daddy" (Nick, and probably also his eyebrows) loves her too.

In prison/at the Canadian day spa chapel, Serena is praying for her unborn child and asking forgiveness for her sins.

Idk, I feel like it'll take more than 30 seconds on your knees to gain forgiveness for having a leading role in the creation of a state which forces women to become human incubators and housekeepers.

Ol' Coconuts and Treason has been eavesdropping and tries to convince Serena to play double-agent in order to take down Fred.

The authorities seem intent on nailing Fred so much more than Serena, but June's desperation to destroy her could change that. Both Waterfords deserve to rot in (a far less swanky) jail. 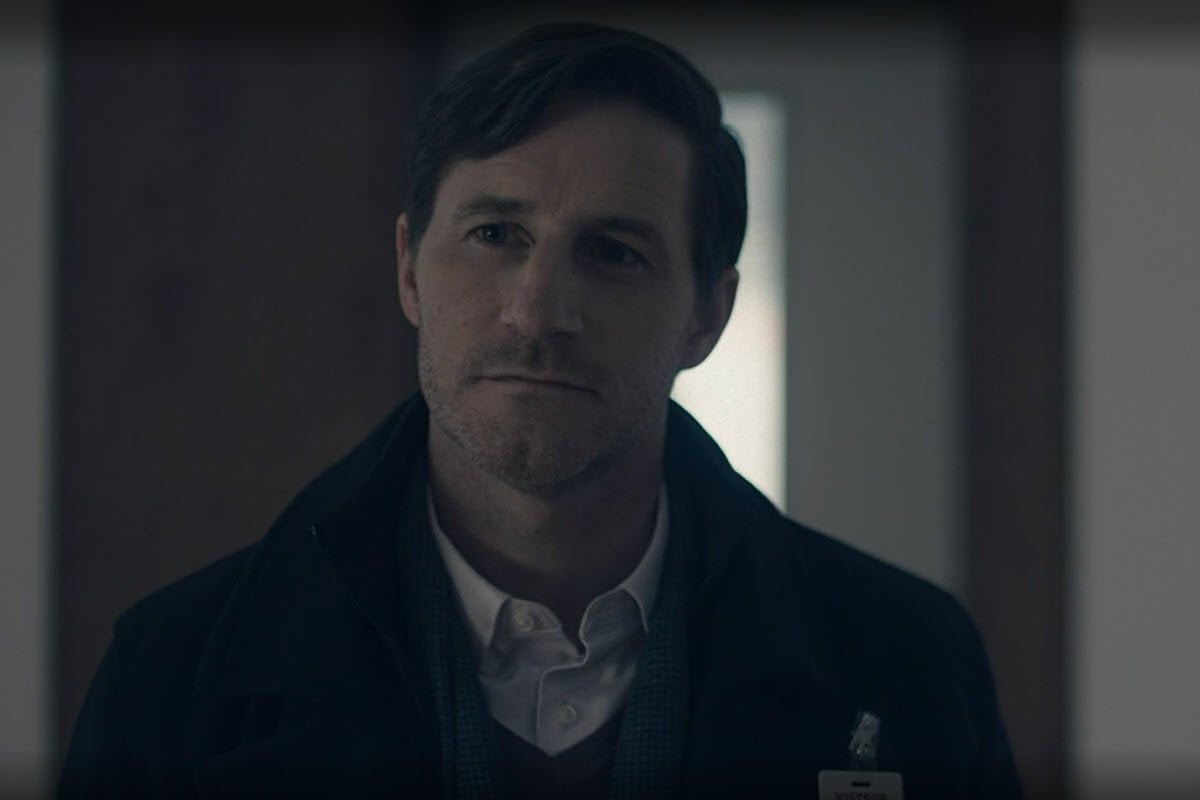 My brain starts singing "IF YOU LIKE PINA COLADAS" every time we see him and I don't think that's normal. Image: SBS.

Anyway, Serena just waltzes alone into the day spa room of a man she recently told officials abused her and cut off her finger. He offers not to testify against her so their baby can have a better upbringing, but she still doesn't think she needs him.

These days, Fred speaks almost exclusively in a whisper that makes my skin crawl.

He is also still calling June 'Offred'. Besides the fact that it shows he has learned precisely nothing, she was most recently Ofjoseph. Keep up Fred, you f**king idiot.

June is obviously terrified of being alone with Luke because she invites herself on a grocery trip with Moira. And no one voluntarily goes grocery shopping.

Here, she's completely awestruck by a world she forgot existed. She also appears a little... confused? jealous? of how in step Luke and Moira seem to be. Their life together seems comfortable, mundane, normal.

When she takes a packet of chips off a shelf, it reminds her of how the Handmaids communicated in the Loaves And Fishes. She imagines Alma's face (RIP), and is almost fully overcome by flashbacks of the torture and abuse she has faced. 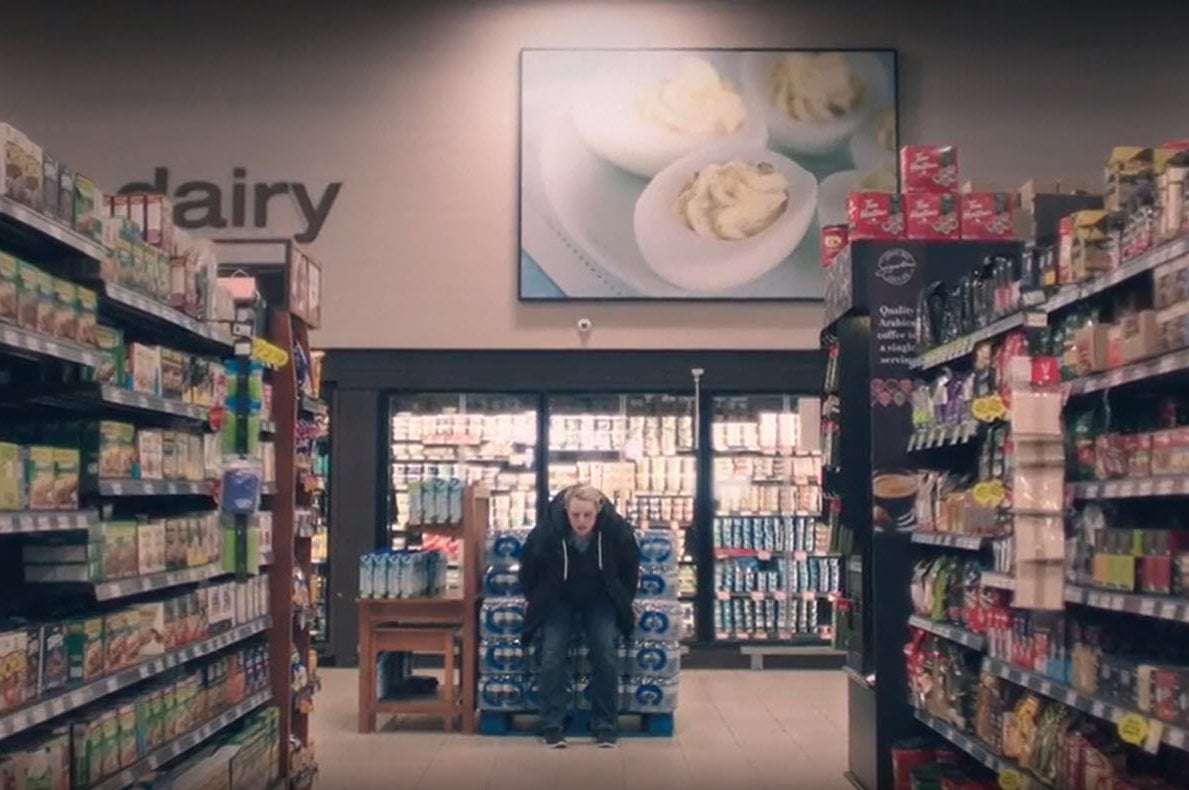 Get the gal in front of a PTSD counsellor, stat.

That night, it's clear how far she has yet to come when Rita, Emily and Moira sit around and revel in their "f**k 'em" attitude towards Gilead and the Waterfords.

Rita tells June about Serena's pregnancy, and she unconvincingly replies that she doesn't care.

That she looks like she's about to have an aneurysm says otherwise.

Oona makes a surprise visit to drop something off for June. Anyone who has ever been through a breakup knows that's a convenient cover story.

Moira chases her out and finds out the NGO hasn't been shutdown like she'd feared. Instead, it's temporarily barred from operating outside of Canada after smuggling June across the border.

Turns out delivering a "major intelligence asset" allows for leniency. 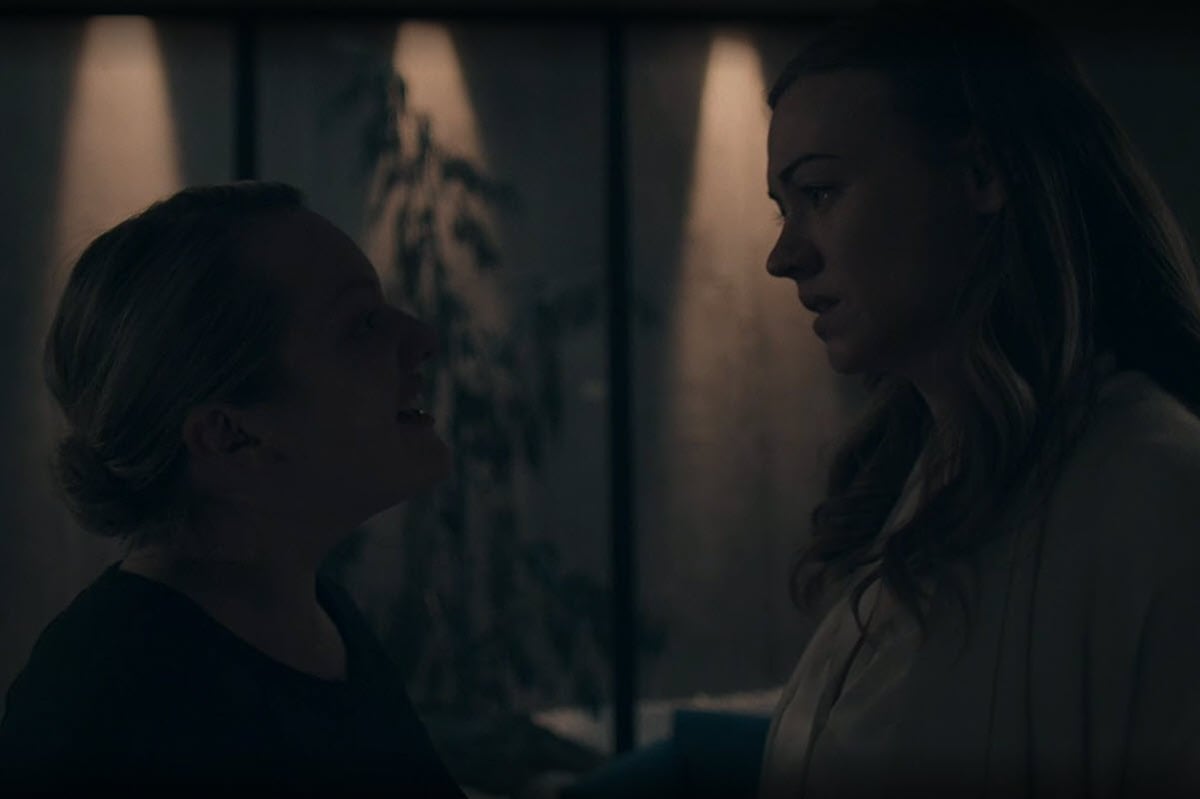 Serena says God must've brought June to her so Serena can make amends.

THE AUDACITY OF THIS WOMAN.

"I brought myself here so that I could tell you how much I hate you," June responds.

"You don't deserve to make amends to anyone. The only thing that you deserve is a life full of suffering and shame. You have destroyed my life, my family, my friends, my country and my child. There is no one less worthy of redemption than you." 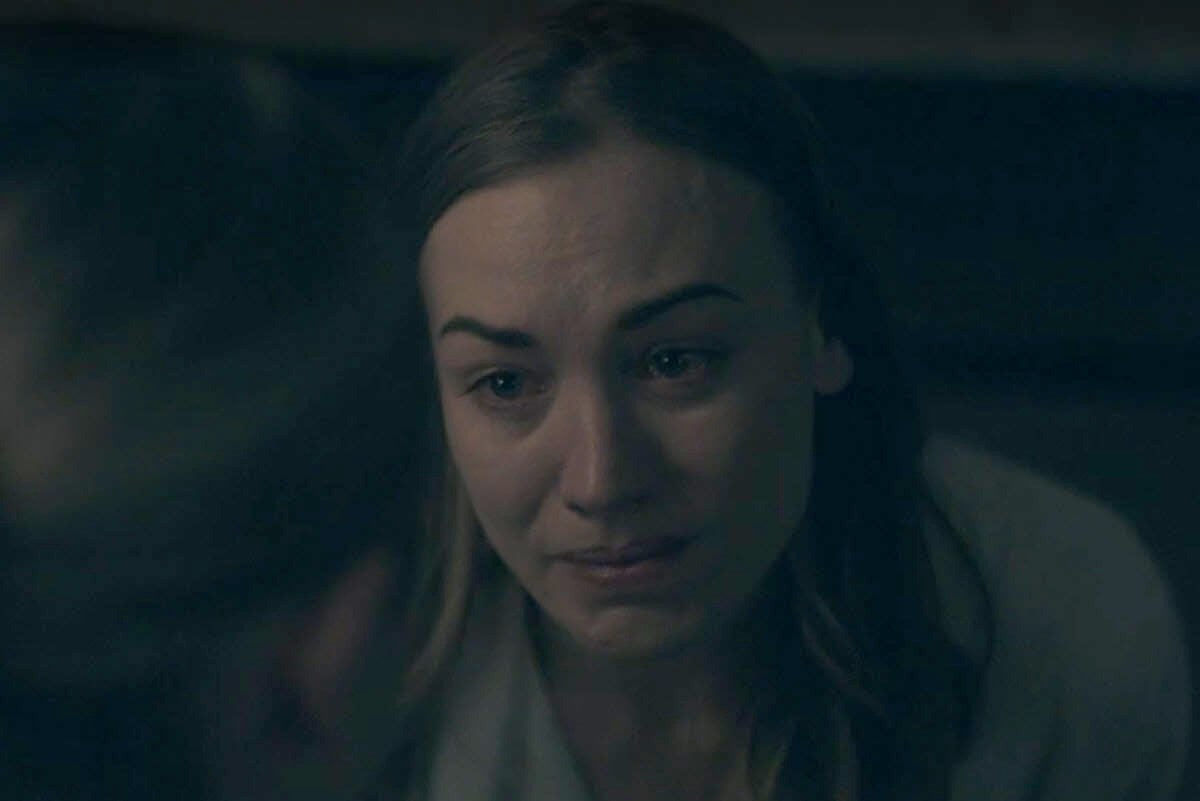 Serena gets down on her knees, and June gets right in her face. Just like Serena did when she literally owned June.

"Do you know why God made you pregnant? So that when he kills that baby inside your womb, you will feel a fraction of the pain that you caused us when you tore our children from our arms," June growls. 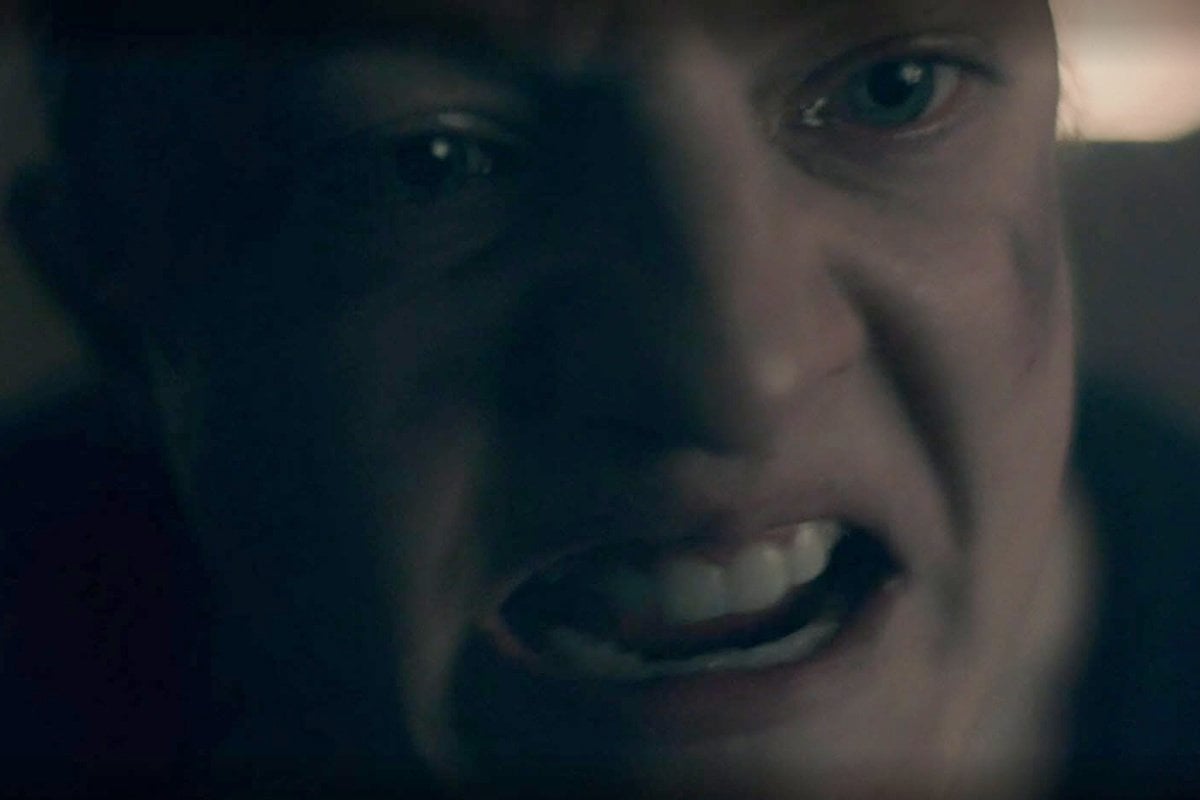 And it is here, standing over a woman she despises more than anything, that June seems most at home. Yelling at Serena. Screaming at her, spit flying, full of rage, wishing upon her the pain she's inflicted on others.

Serena is shaking, and God, this is satisfying.

After June returns to the house, she has sex with Luke. It's the complete opposite of romantic or emotional and honestly, June becomes the abuser. It's clearly an act of defiance. It's her snatching back her agency, but in doing so she denies Luke's.

The next day, June tells Mr Coconuts and Treason that Serena is a sociopath and an actress. She's fuelled by hatred and a need to protect herself from her own overwhelming emptiness. It's a monologue as much about June as it is about Serena.

Serena proves her point by going directly to Fred, agreeing to an alliance to try to save herself.

"If you feel yourself being sucked in by her, run. Run like hell," June says.

L
laradodds15 a year ago

Reply
Upvote
1 upvotes
You're description of the scene between Luke and June should have read - "After June returns to the house, she climbs into bed with Luke. What starts out as a possible moment of reconnection quickly turns into June raping a visibly distressed Luke. June is now both a victim of rape and a rapist"
Just because the perpetrator is a very sympathetic character (and victim herself) and the victim is male doesn't mean we shouldn't call it exactly what it was - rape.
E
esm a year ago