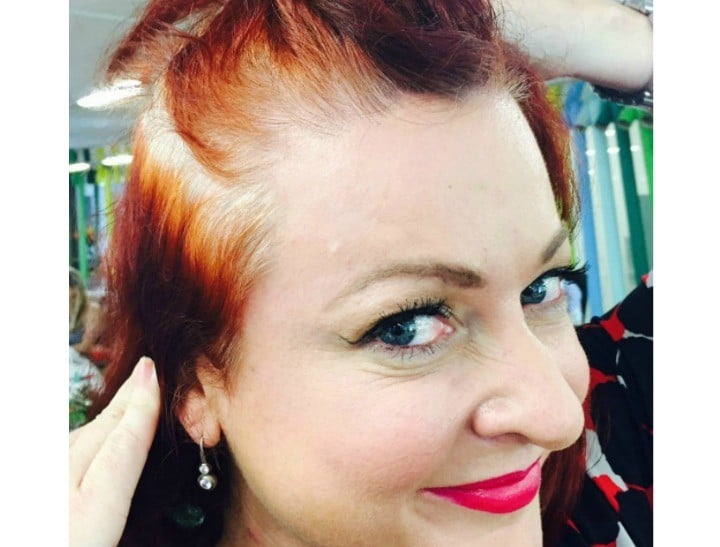 So the Generation Y hipsters are dyeing their hair grey to be cool now? Please stop.

It’s crazy that there are two queues for the inner-city wash basins – the youngsters lining up to go grey and the oldies like me stampeding to reverse the process. Side by side at the salon sink.

Attention young people, don’t age yourselves on purpose. And, you, children of the instagram, stop calling it #grannyhair. That’s just rude.

I’m 41 and I’m 90 per cent grey. My hair started going grey when I was 18. I just can’t cope with being a silver haired old lady just yet so these hip, ironic youngsters doing their adaptation of that is, to me, just wrong.

I wish I could celebrate my grey hair as the gaining of wisdom, a rite of passage, or even a billboard for growing old gracefully – but I can’t. I just find it embarrassing. If I let my frizzy curly hair go completely natural it would resemble a Brillo pad and my self-esteem would follow it down the drain.

I dye my hair bright red mainly because it suits my temper. But it also makes the white roots so obvious I have a permanent booking at my hairdresser’s every three weeks. As well as the obvious expense, that’s a lot of time sitting with goop on my head reading trashy mags.

If I try and stretch it our to four weeks I notice people talking to me but getting distracted by the silver halo around my face, or the neon white part along my scalp.

When I do my regular spots on Channel Seven I get the make up artists to cover my part with red blush or I buy this weird product called “Touch Back” which is basically like a huge red texta so I can colour in the roots each day.

While my early onset grey has always made me feel like I hit the freakin’ genetic anti-lottery, I hope I can embrace it when I’m older. My Mum is in her mid 60s and she’s pure white and it looks fabulous. My grandfather had a shock of white hair and it suits him perfectly. I look forward to being pure white, as it looks snazzy – but the salt and pepper – well, well more salt and a dash of pepper – just looks terrible.

Am I vain? Sure. But what role models do I have to look up to? I’ll name two famous female celebs with grey hair – Helen Mirren and Judi Dench. I love that they both wear their white with panache. Now name another three for me.

Now try naming a celebrity in her late 30s or 40s or even 50s who has grey hair.

Former Channel 10 presenter Yumi Stynes refuses to dye her hair and at 39 has a few grey strands.

Juanita Phillips has admitted she’s as grey as a badger but doesn’t believe her employment would last if she faced the nation reading the ABC News naturally. She’s 51 and I salute her.

Men with grey hair are called ‘silver foxes’ or ‘distinguished’ whereas women with long grey locks are ‘old hippies’, ‘crazy cat ladies’ or ‘those who dabble in the dark arts’.

Yet another unfair double standard.

So the Gen Y’s can have it along with their hipster one gear bikes and kale beer. Once I get to 100 percent grey I might rock it with a pink streak but if I’m honest I think it will be a while until I’m doing the silver strut.

Until then, you’ll find me at the sink with red goop on my head.

Where do you sit on the grey hair trend? Trendy or insulting?

What age does women’s hair go grey? The results are in.

Kate Middleton has grey hair and so do I. Get over it.

keep living and your hair will go grey soon enough and you'll hate it.why rush it that's incomprehensible me.

No we won't stop! Sue us lol back to the sink ye go XD