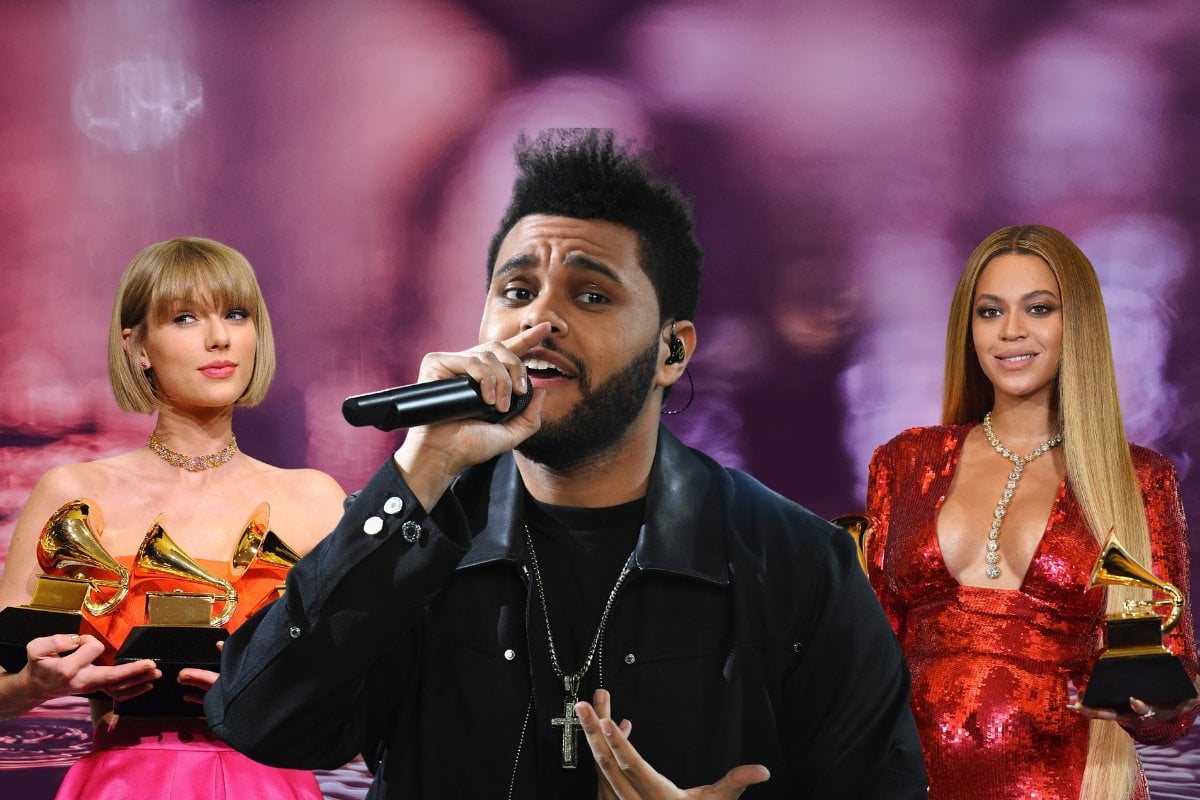 This week, the 2021 Grammy Awards nominations were announced. Within minutes, there was anger.

The Grammy nominations are not new to controversy and criticism. Over a lack of diversity, over consistently overlooking particular artists and music, over placing mostly 'pop' artists of colour in 'urban' categories, etc.

It's difficult to recall a year where the nominations were routinely accepted as fair by not just artists, but their fans too.

Watch: In 2017, Adele dedicated her Grammy win to Beyonce. Post continues below video.

The 2021 awards will air on January 31, though how COVID-19 will impact the usual red carpet and ceremony remains to be seen.

As always, there are noticeable snubs - and this is mostly where the drama is.

The Weeknd - who released a critically acclaimed album and whose single 'Blinding Lights' has been the sound of the year (and that TikTok dance you've definitely done in secret) - did not receive any nominations in the year's biggest snub.

Listen: Mamamia's The Spill on the Grammy nominations. Post continues below audio.

The Weeknd, real name Abel Tesfaye, has demanded transparency from the Grammys after receiving zero nominations.

"The Grammys remain corrupt," he wrote across his social media platforms.

"You owe me, my fans and the industry transparency."

He later said: "Collaboratively planning a performance for weeks to not being invited? In my opinion zero nominations = you're not invited!"

He received some big name support too, with Elton John saying 'Blinding Lights' was his Song and Record of the Year.

In response to the nomination announcements, Nicki Minaj tweeted:

Never forget the Grammys didn’t give me my best new artist award when I had 7 songs simultaneously charting on billboard & bigger first week than any female rapper in the last decade- went on to inspire a generation. They gave it to the white man Bon Iver. #PinkFriday

"To the Grammys, I am flattered to be acknowledged and appreciated for my artistry. I am very meticulous and intentional about my music. With that being said, I set out to make an R&B album. 'Changes' was and is an R&B album," Bieber wrote on Instagram.

"It is not being acknowledged as an R&B album, which is very strange to me. I grew up admiring R&B music and wished to make a project that would embody that sound. For this not to be put into that category feels weird, considering from the chords to the melodies to the vocal style, all the way down to the hip-hop drums that were chosen, it is undeniably, unmistakably an R&B album!"

The response to this is best summed up by two takes on Twitter:

"Y'all Justin said he is TIRED of his blackness being erased," one user said, with 38,000 likes.

"They typecast him into pop like how they typecast black pop artists into R&B and 'urban'," another responded.

Meanwhile, Paramore frontwoman Hayley Williams was not nominated for her debut solo album Petals of Armor, nor was Halsey for her third studio album Manic.

While likely disappointed (Halsey criticised the Grammys last year after her song 'Without Me' was also snubbed), both were more celebratory of the fact 2021 is the first year that all the nominees for Best rock performance are women.

stop sending me sorry's for not getting a nom LOL pmore been nominated lots and even won. thank you for your sweetness but stop! the women leading the rock and alt nom's are THE story and the moment.

An ultimatum and the Super Bowl.

The Weeknd has been nominated 10 times and won three Grammys in the past, making his snubs this year even more strange. And he's also been sweeping all the other award shows, including taking home Best R&B trophy and Video of the Year at the MTV VMAs.

According to Rolling Stone, part of the snub may be due to the fact the Recording Academy reclassified its R&B categories. In June, the Grammys announced it was renaming the Best Urban Contemporary Album award - the category where The Weeknd has won 2/3 of his awards - to Best Progressive R&B Album.

But the change hasn't stopped the criticism of the category, which rapper Tyler, the Creator once called a "catchall" for Black artists across multiple genres.

But, there could be more to The Weeknd's snub.

The Weeknd is performing at the Super Bowl halftime show one week after the award show, and this contract may have cost him awards.

Sources told TMZ he was in talks to perform at the Grammys too (and of course, performers are pretty much always nominees) but fears of duplicate performances and uh, "bitter" back-and-forth talks put a pin in the plans, with the Grammys effectively using an ultimatum.

TMZ said the Tesfaye camp feel his Super Bowl contract may have cost him nominations.

The Grammy process is supposed to go like this:

The Recording Academy receives submissions from artists and their labels, organises them into categories and then sends them to its 12,000 eligible voting members (made up of music industry professionals, from label execs to engineers) who select around 20 contenders per category, by popular vote.

Those shortlists are then submitted the Academy-organised review committees (whose identities are kept a closely guarded secret), who whittle them down to the list of announced nominees. A final popular vote determines the winners.

But in early 2020 then-president and CEO of the Recording Academy Deborah Dugan made claims the organisation was complicit in corruption, citing "voting irregularities, financial mismanagement, 'exorbitant and unnecessary' legal bills, and conflicts of interest involving members of the academy's board, executive committee and outside lawyers".

She was on administrative leave at the time, and officially fired on March 2.

Dugan claimed in a 45-page document corrupt practices included booting names on the list for their own favourite artists and songs, not following the democratic voting.

"Specifically, Mr. Ehrlich attempted to press the Academy into nominating a song by a particular superstar in order to increase his ability to convince the superstar to perform at the Grammys," Dugan claimed, as reported by CNN.

"The email reads, in part: looking at the AMA nominations this morning, it's more about who's NOT there than who is.... and [superstar] is definitely not gonna be happy. Minor representation at best... sooo. I think there's a case to be made to [superstar] that a performance of [song] from [album] on our show, should it be nominated."

Dugan also made claims of misogyny and sexual harassment within the Academy.

On Mamamia's daily entertainment podcast The Spill, hosts Laura Brodnik and Kee Reece discussed how committee members are required to vote across multiple categories, even those they don't have expertise in, which can manipulate the selections.

"So what we have then is someone who is in a really specialist group, you could be in sound mixing, but you're also voting for Pop Artist of the Year or Country Artist of the Year. Now, you may not have any expertise in these areas or you may not even know who all of the artists are, so often you're just going to tick the name that you know," Mamamia entertainment editor Laura Brodnik explained.

"You're seeing Adele's name there and you're thinking 'Oh I know Adele!' ... It's these people who are voting in categories that they're not across, but they're only voting so they can stay within the Grammys pool."

The Grammys' many issues - in regards to diversity and possible issues in its voting system - is unlikely to change without major pressure from some of its key stars. Think Beyonce and Taylor Swift; the huge names with the industry sway to make a difference.

"It's going to fall on someone like [Swift] to step away and say 'I'm not being involved until there's a fairer process around this'," Brodnik said.

james b 2 months ago