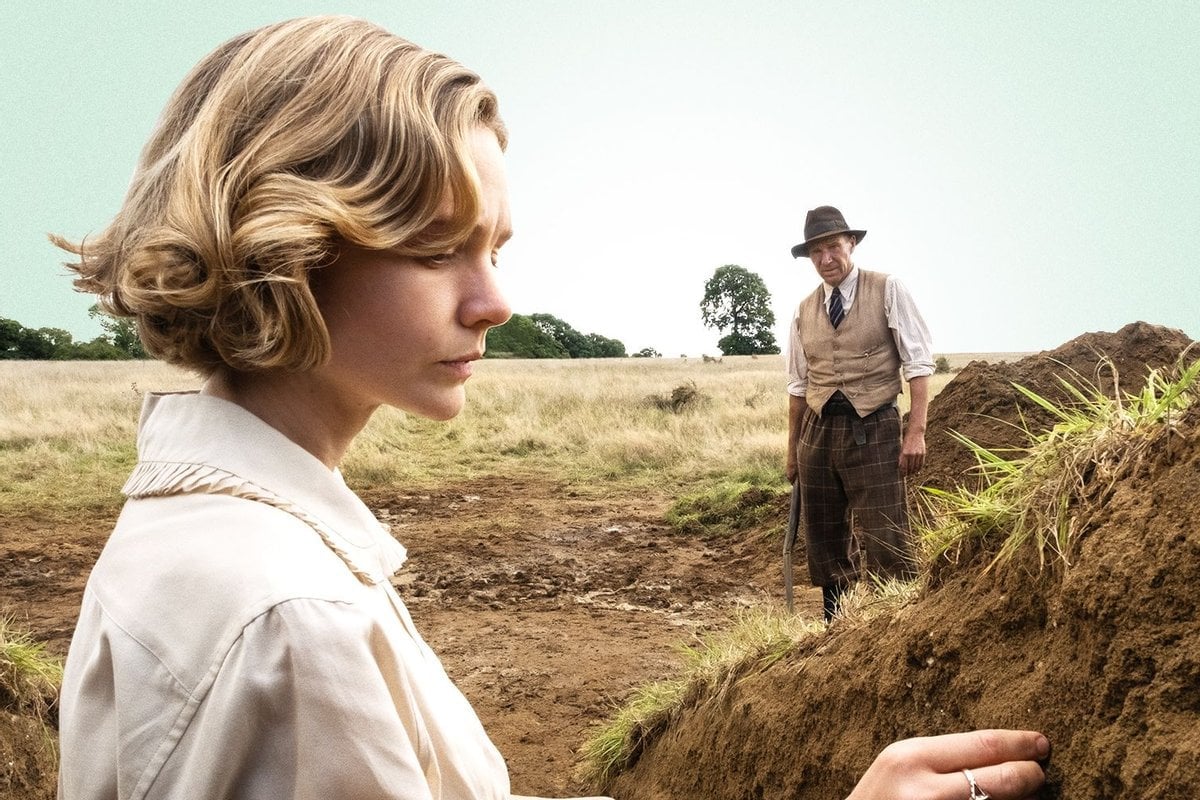 It features everything we love in a good period drama - a rich widow, an impending war, and a mysterious graveyard.

What makes it even more watchable is the fact it's based on a true story.

The film, which was directed by Simon Stone, is based on John Preston's 2007 novel of the same name which is based on the real-life story of the greatest archaeological find in British history.

Watch the trailer for Netflix's The Dig. Post continues below.

Over 1400 years ago, the Anglo-Saxons hauled their 80-foot wooden ship into a field in Suffolk, on the east coast of England. Inside a chamber in the middle of the ship, they placed the body of their King, and surrounded it with precious gems, weapons, gold jewellery and coins.

It would remain there for 1300 years.

Edith was born Edith Dempster in 1883 to a wealthy manufacturing family. She later married Frank Pretty after he proposed to her 15 times, and the couple purchased the Sutton Hoo estate together.

The estate, located in southwest England, derived the first part of its name from the nearby village of Sutton. While "hoo" is Old English for "spur of land".

When the couple bought the property, it featured 18 mysterious mounds of dirt that the locals claimed were ancient burial grounds. After Frank died, Edith, who lived on the property with their son Robert, became more and more determined to have the mounds excavated.

She contacted the local Ipswich Museum, and they sent Basil out to start the excavation.

Basil was an autodidact and self-taught archaeologist who worked for the museum. He was born in 1888 and he left school when he was 12 years old to work on his family's farm. During that time he also taught himself Latin, French and astronomy.

When he left the farm, he worked odd jobs while pursuing his passion for archaeology and astronomy. By the time he was sent to Edith's he had already written his first book about astrology and was working as a freelance archaeologist for the museum.

Basil and his assistants began digging up three of the mounds in the summer of 1938 and found knives, an ax head, bronze fragments, textiles and some human remains.

Then in 1939, they decided to work on the biggest mound. Under the mound they found the 80-foot Anglo-Saxon burial ship. The sheer size of the ship suggested that it could have been a significant burial site, so the museum brought in professional archeologists Charles Phillips (Ken Stott), Peggy Piggott (Lily James), and Stuart Piggott (Ben Chaplin). Basil remained on the project in an assistant role.

While working on the largest mound, the team found what would become known as the Sutton Hoo helmet attached to human remains. The helmet featured ornate metalwork and precious stones. They also found spoons, spears, silver bowls, and a sword surrounding the body.

LISTEN: The biggest Netflix show that no one is talking about. Post continues below.

The exact identity of the body buried there remains unknown, but many scholars believe the ship was most likely the burial ground of Raedwald, the first Christian king of East Anglia, who reigned from around 599 to 624.

After an inquest it was decided that Edith was the rightful owner of anything that was discovered on her property during the digs. She later donated the entire collection to the British Museum, before dying three years later in 1942.

Most of the more dramatised moments of the film - the plane crashing into a nearby lake, and the affair between Peggy Piggott and a young photographer were made up to add to the drama of the film.

In reality, no one died, and there were no steamy affairs during the dig. Just one of the biggest archaeological finds in history that changed everything we thought we knew about the "Dark Ages".

Digs have continued at Sutton Hoo, even into the early 21st century, with other major finds being a young man who was buried with his sword, shield and horse. There is also evidence that executions took place at the site, with other human remains showing signs of violent and untimely deaths.

You can watch The Dig on Netflix now.