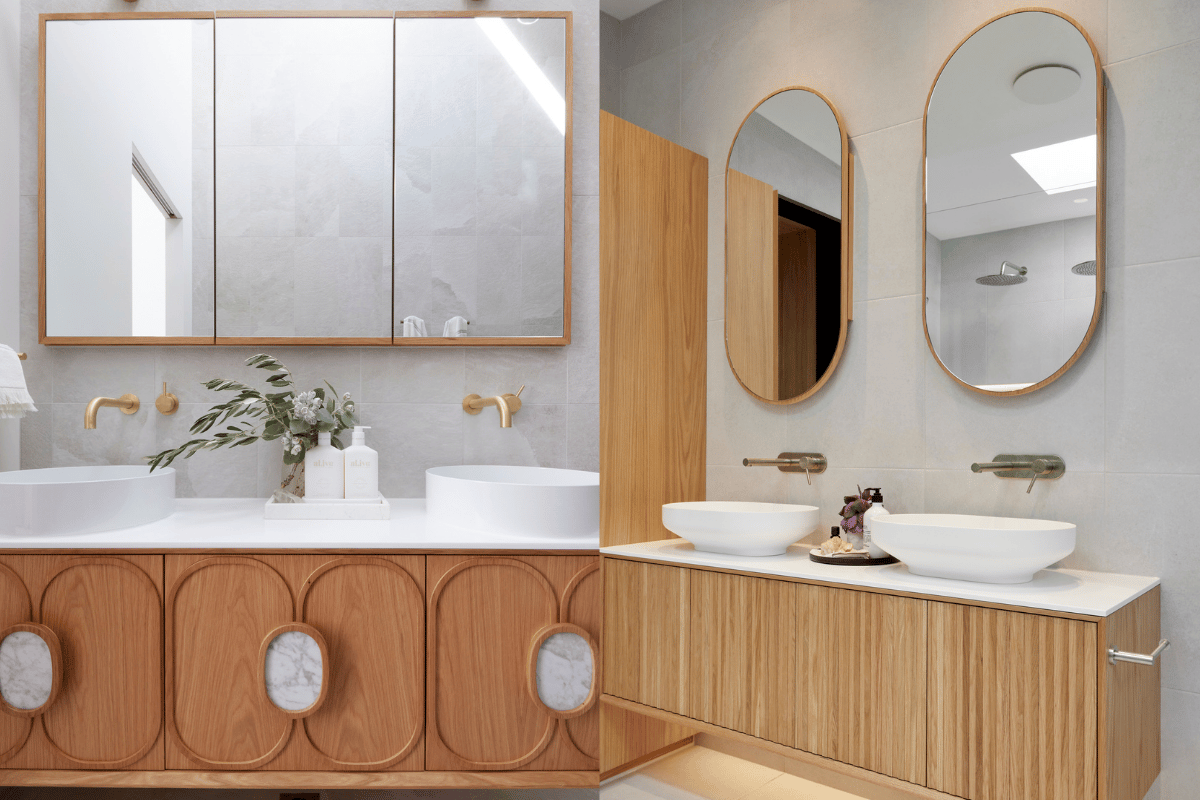 We're back for another week on The Block.

With two public holidays on The Block this week, it was a challenge for the Blockheads to complete their bathrooms in time.

During the week, twins Josh and Luke faced some major mishaps, forcing them to work until the very last minute to complete their ensuite.

Likewise, contestants Kirsty and Jesse were forced to submit their room to the judges with a loose bath tap after the defect was picked up by Foreman Keith at the last minute.

Regardless, all five teams managed to deliver their rooms at tools down.

Here are all the photos from The Block's master ensuite reveal:

First up were Perth parents Ronnie and Georgia, who spent $22,200 on their master ensuite this week.

Upon entering the bathroom, the judges loved the couple's use of a neutral colour palette as well as the cabinetry used.

"They just do neutral calm so effortlessly," Shaynna said.

However, Shaynna felt the shower screen wasn't high enough for the bathroom. Especially considering the high ceilings in the room.

"I think Ronnie and Georgia are very clever in spending money where it counts," Darren said. "If that's a standard [shower screen], then I think it's a smart idea."

But overall, the judges agreed the bathroom had major buyer appeal.

"You could never accuse them on being bland," Neale said. "They are delivering something that is going to appeal to the broadest possible demographic." 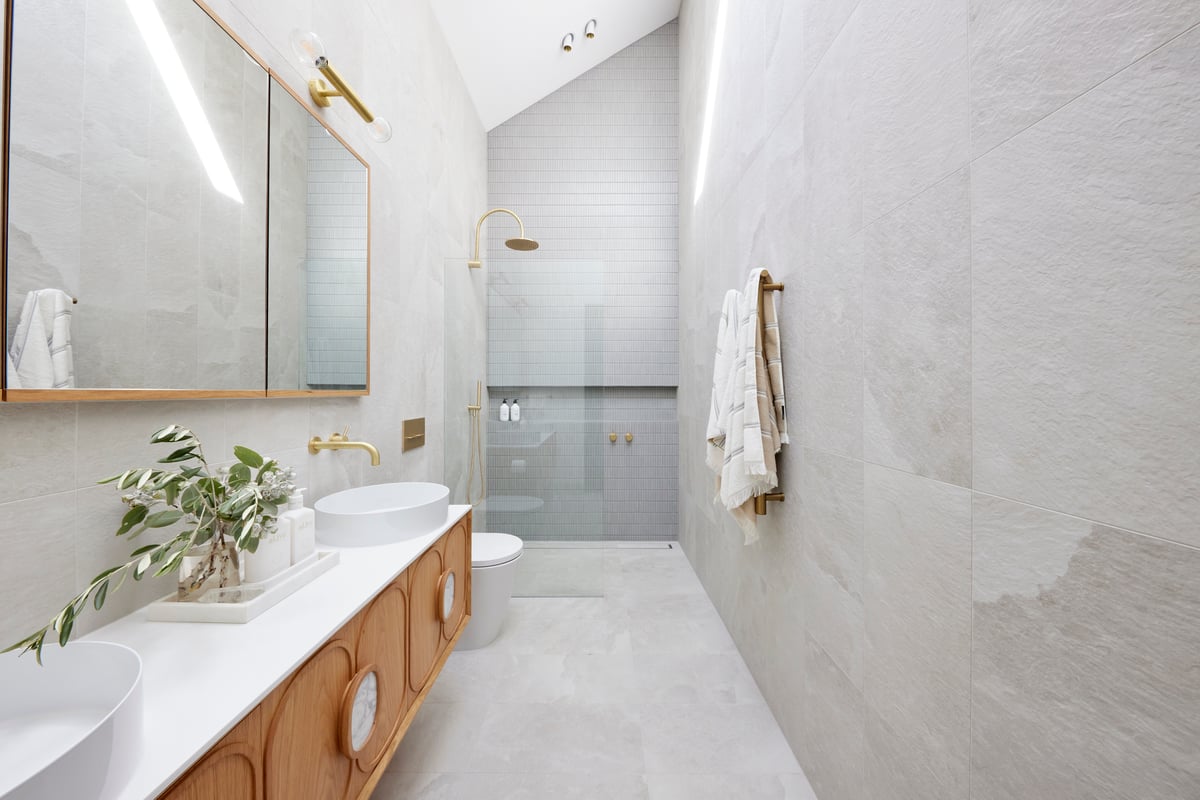 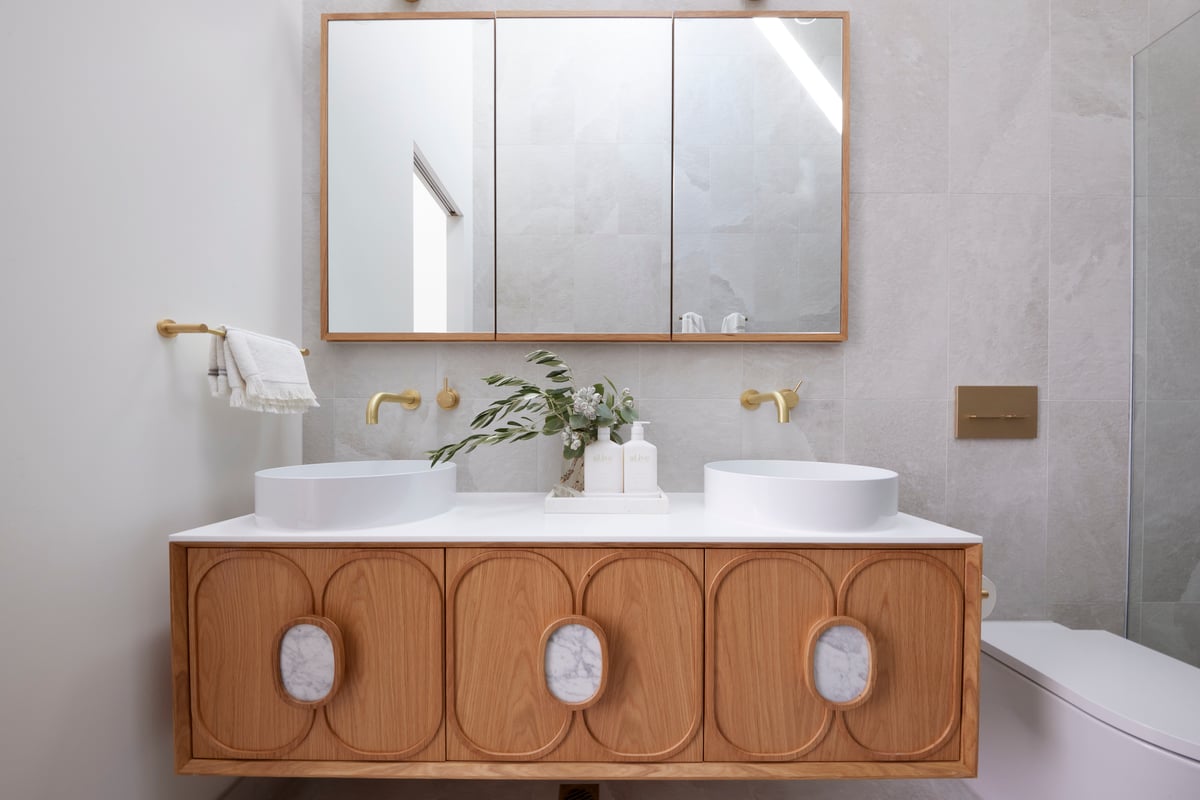 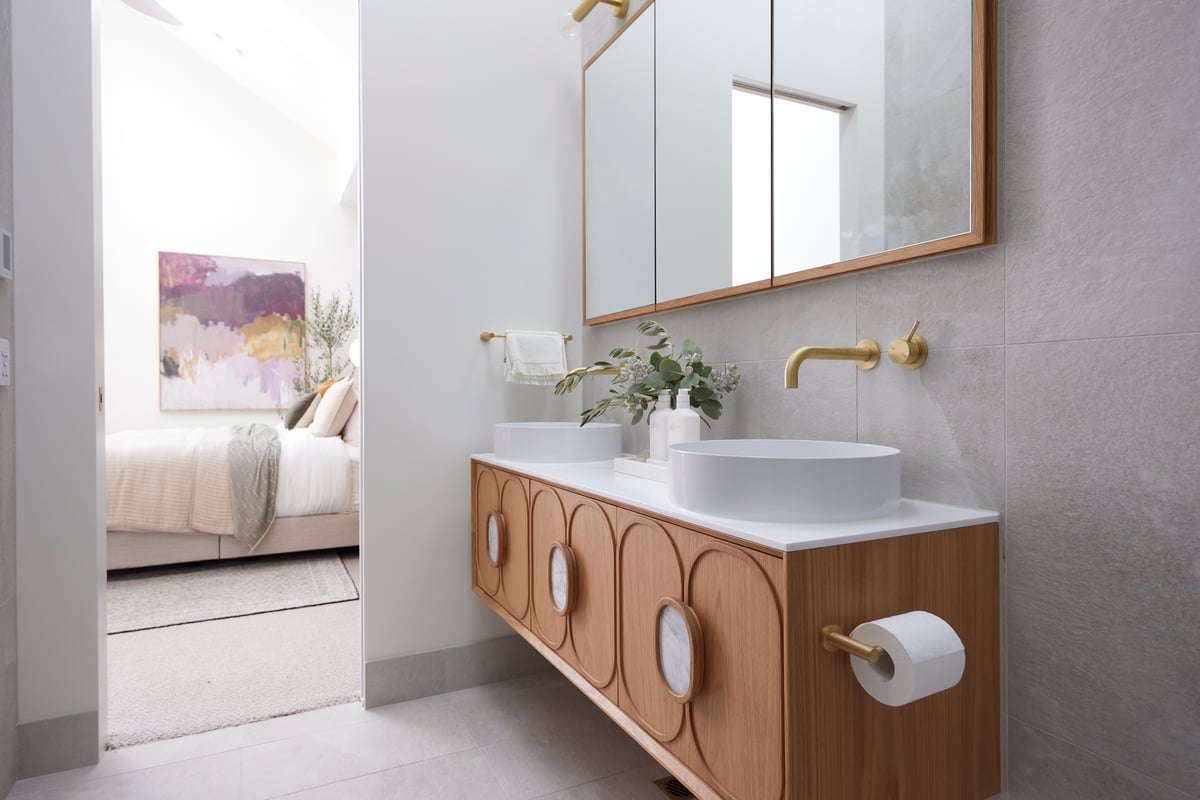 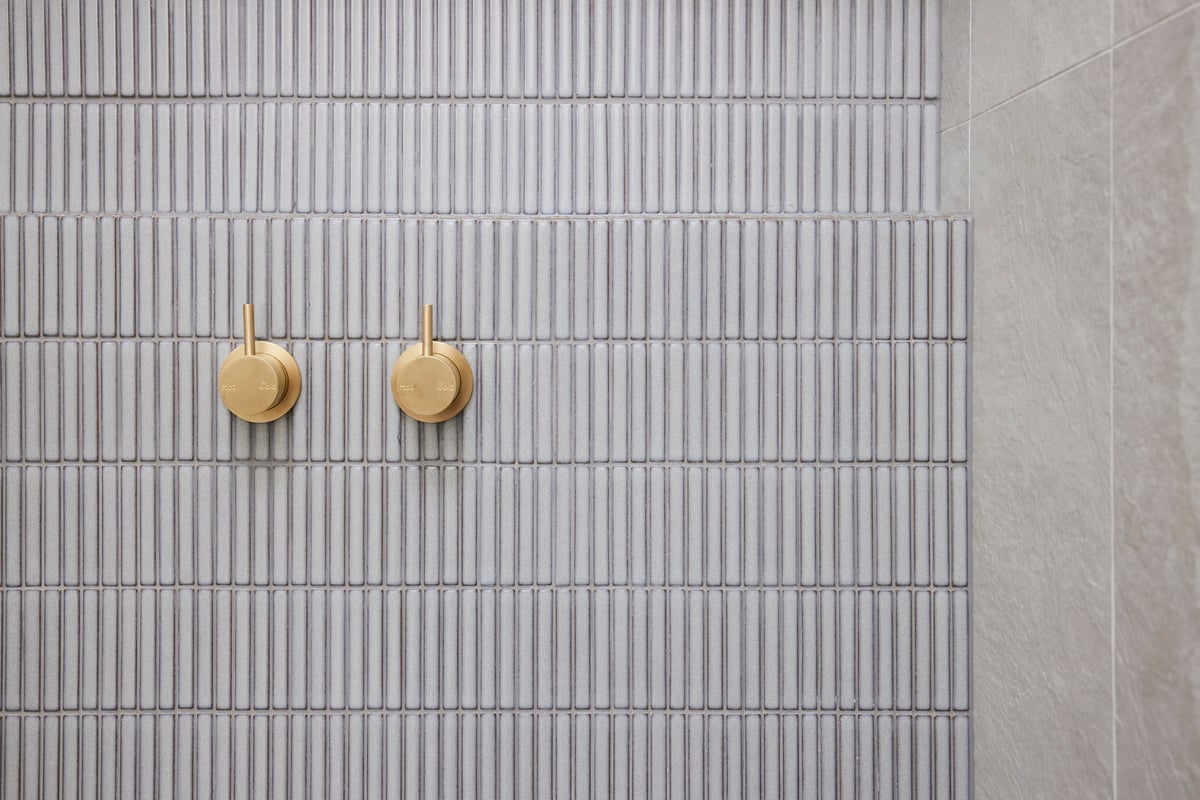 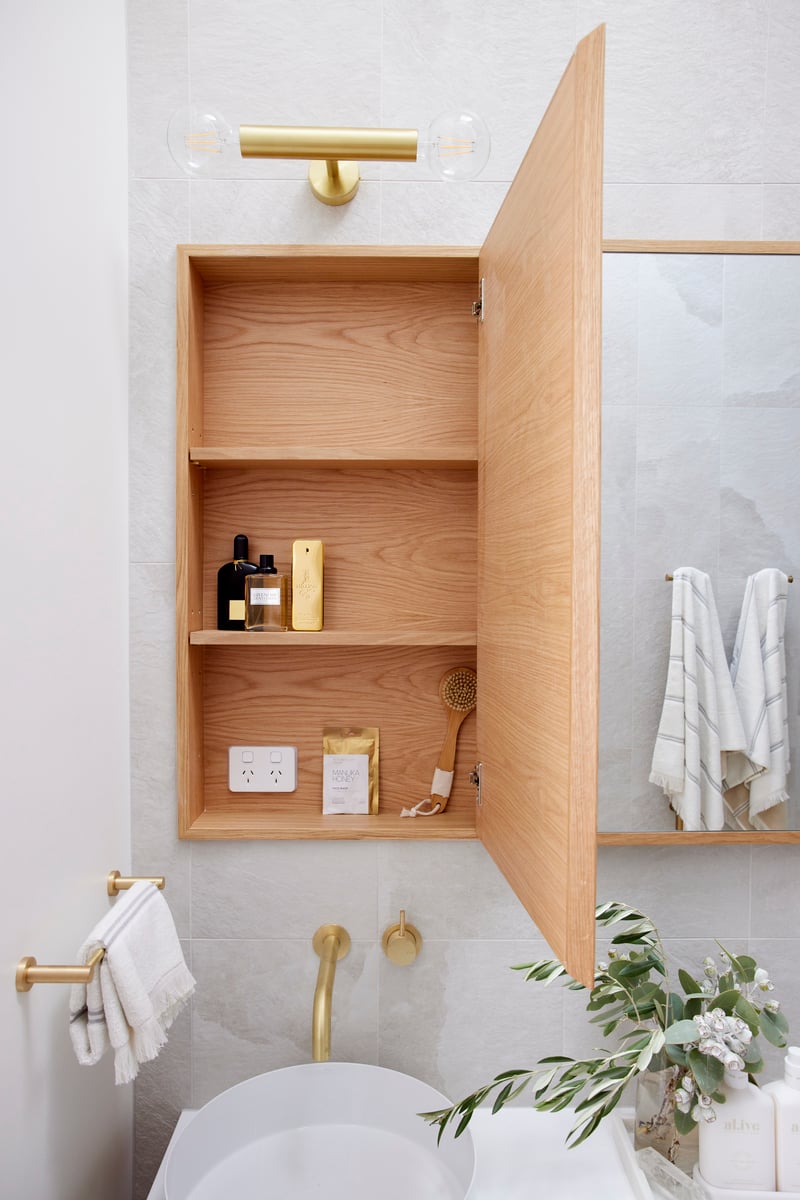 This week, Sydney couple Mitch and Mark spent $26,790 on their master ensuite.

At first glance, the judges felt that Mitch and Mark's bathroom was a "planning disaster".

The huge shower screen used was too close to the basins, meaning there wasn't enough room to move around in the ensuite.

Although the judges found the styling in the bathroom was stunning, they simply couldn't get past the awkward placement of the double showers and the shower screen.

"The planning issues totally outweigh the beauty and the styling," Neale said.

"The minute you come through the door, you are aware that there is something wrong with the planning."

Neale also felt that the shower screen could be dangerous.

"You could do yourself serious damage because it tricks the eye into thinking that there's actually nothing here," he said.

While the judges suggested the couple should change the layout of their ensuite, Mitch and Mark completely disagreed, adding that they don't plan to change any of it. 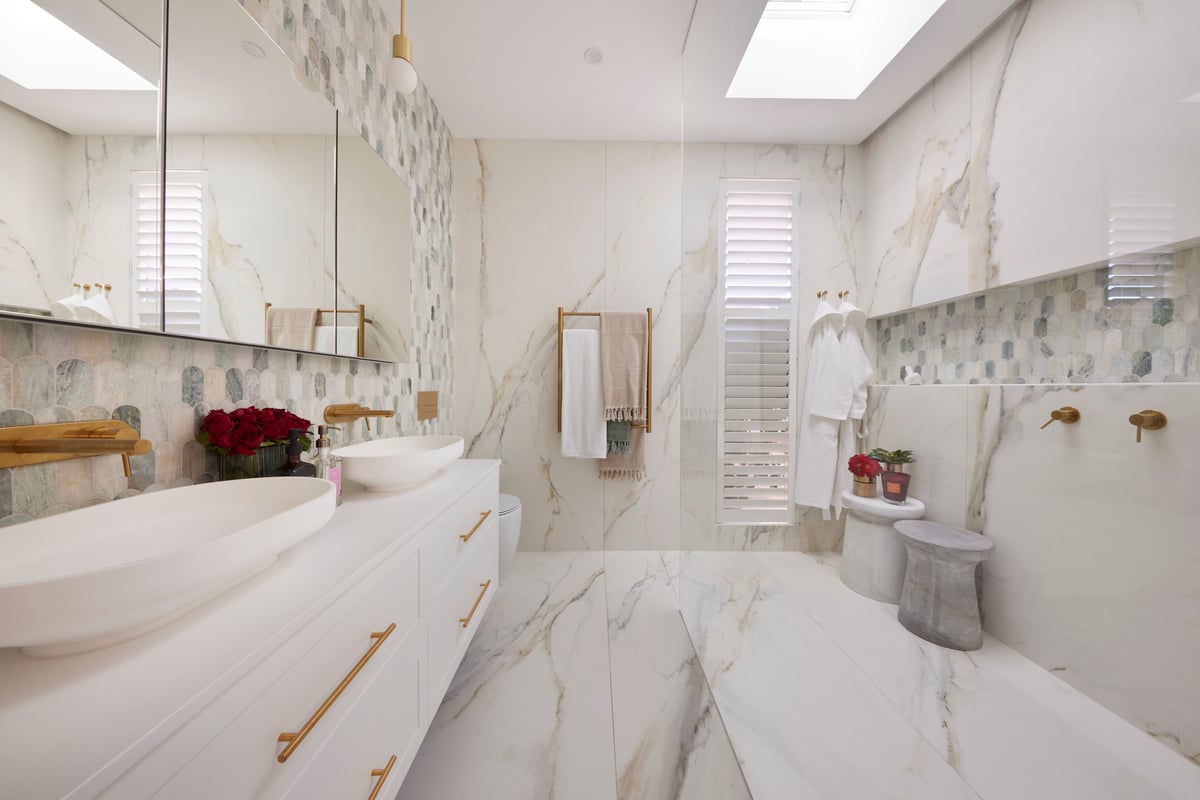 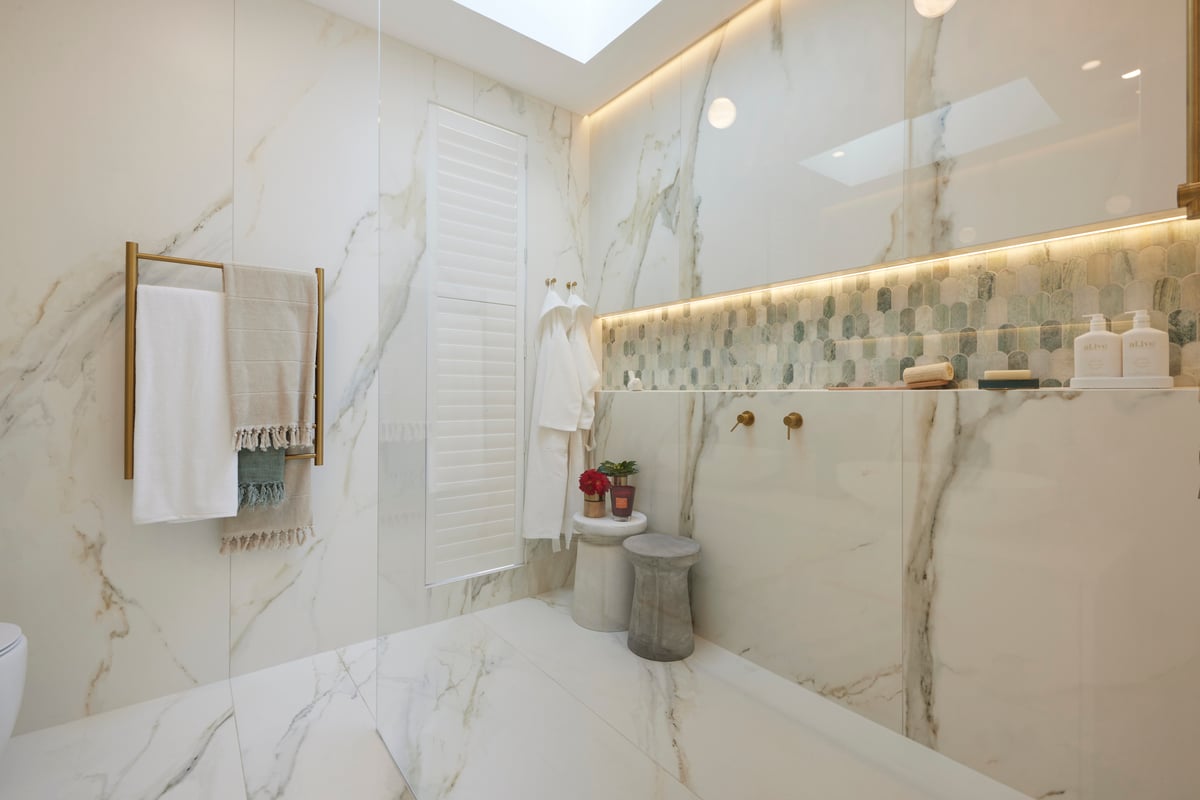 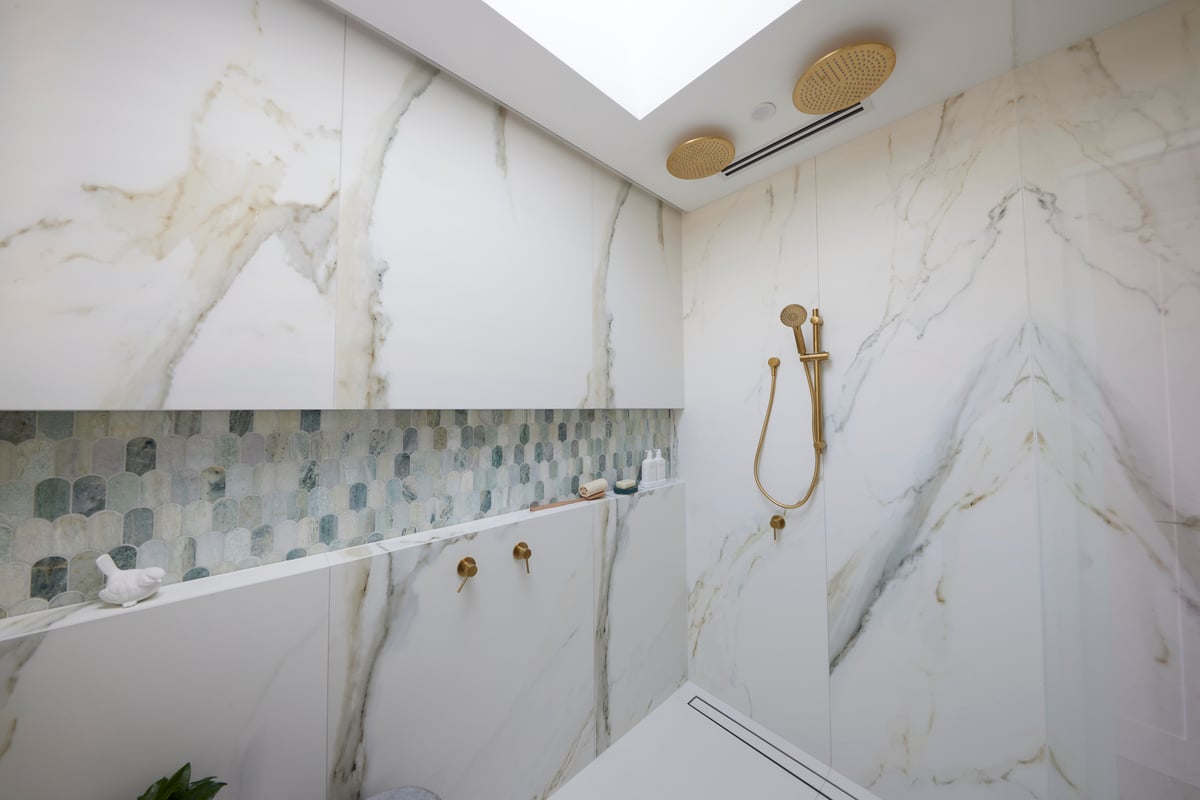 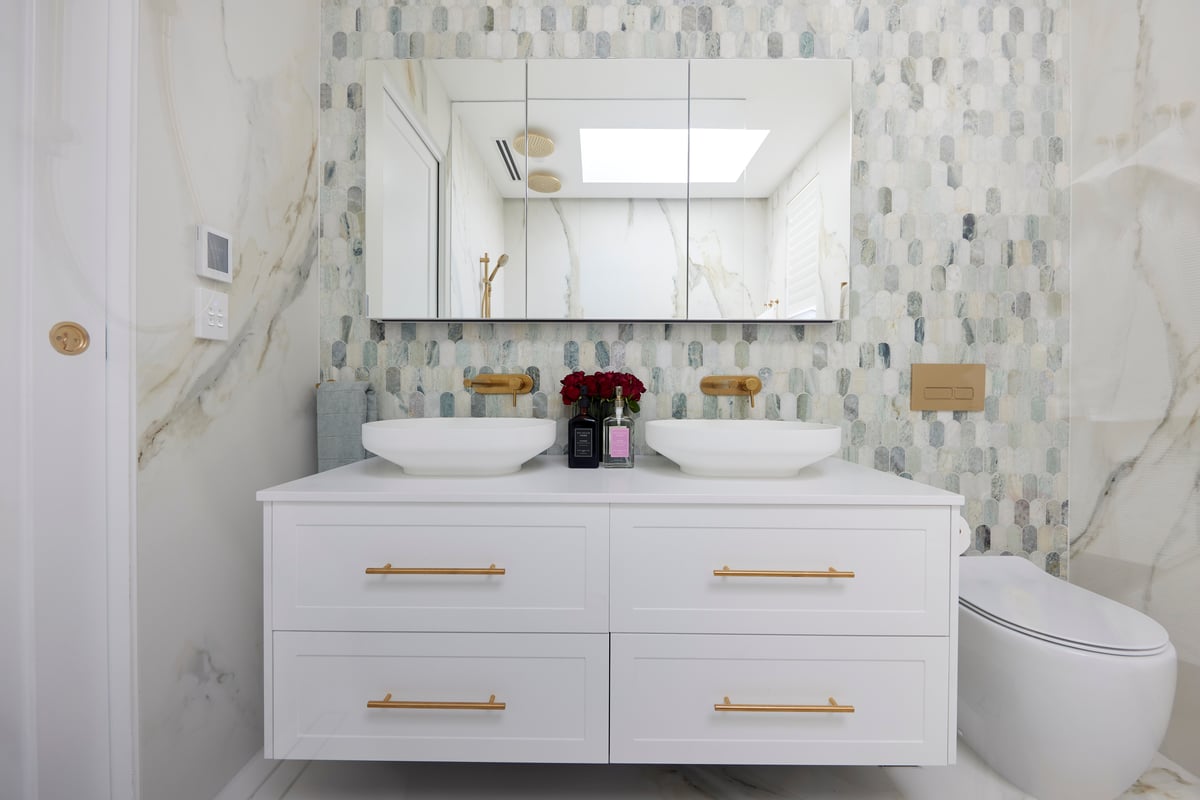 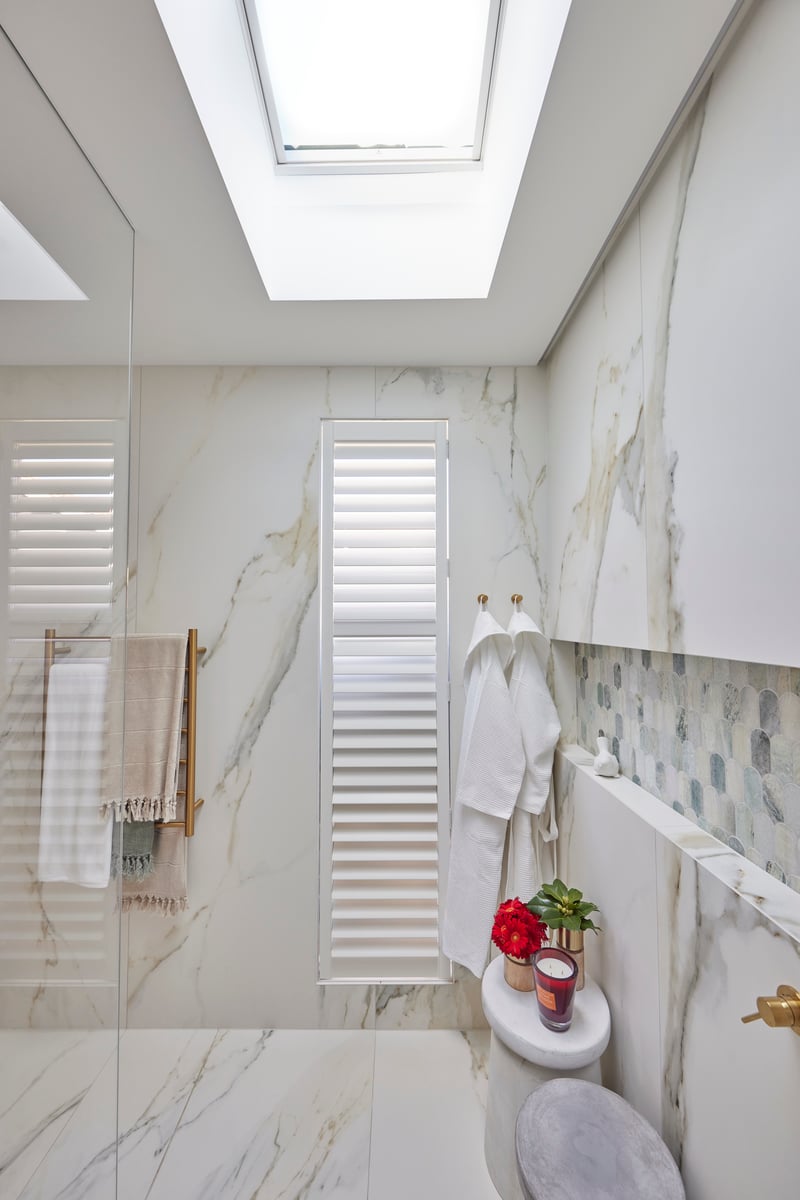 Melbourne parents Tanya and Vito, who spent $17,458 on their master ensuite, were the next pair to face the judges.

"I love the character in here and the courage to make those choices. That brown tile should truly be hideous, but I don't hate it," Darren said.

"The problem I have with that tile though is that it's highly likely a buyer will hate it."

Neale agreed, adding: "Sometimes a room comes along that reminds you that individuality is a double-edged sword."

He continued: "I think that brown tile... is really, really going to polarise. I think they've put the tile in their bathroom that most people would be willing to rip out."

Neale also admitted that the brown tiles reminded him of a 1970s motel, while Shaynna thought the bathroom might be too eclectic for the average buyer.

"Their market is shrinking and shrinking each week," she said. 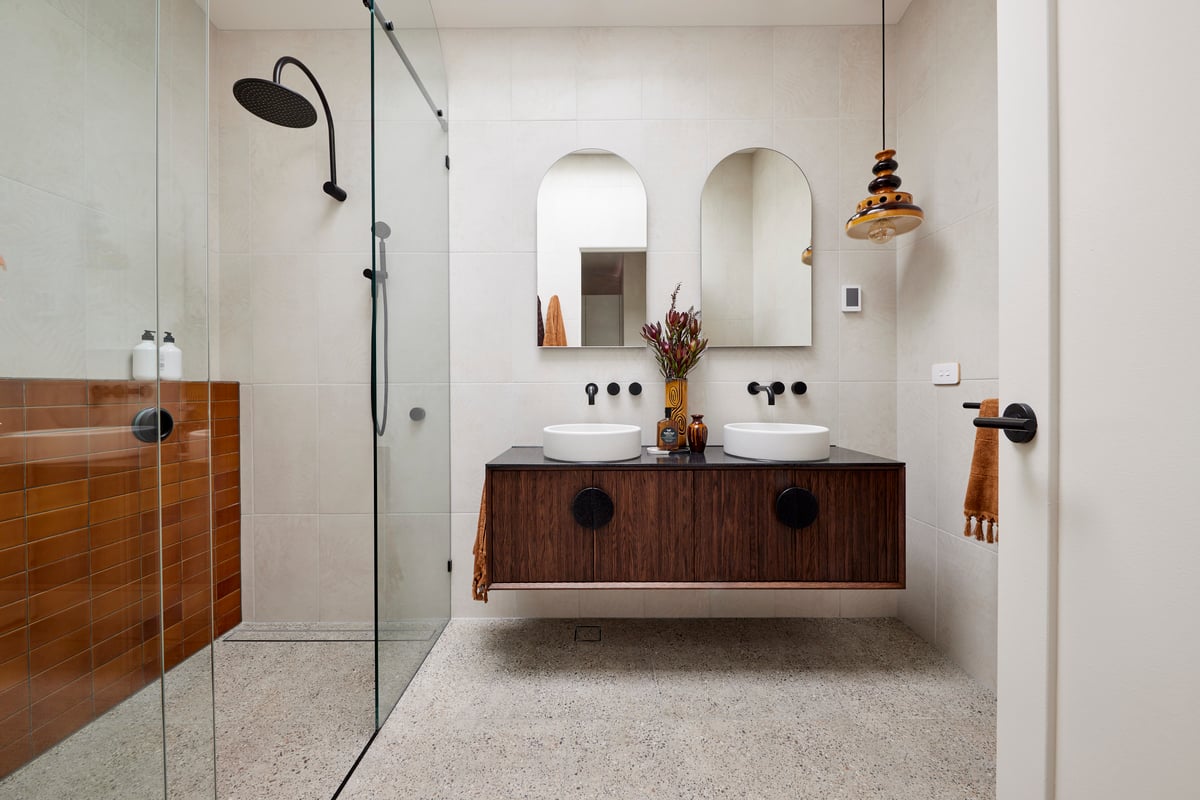 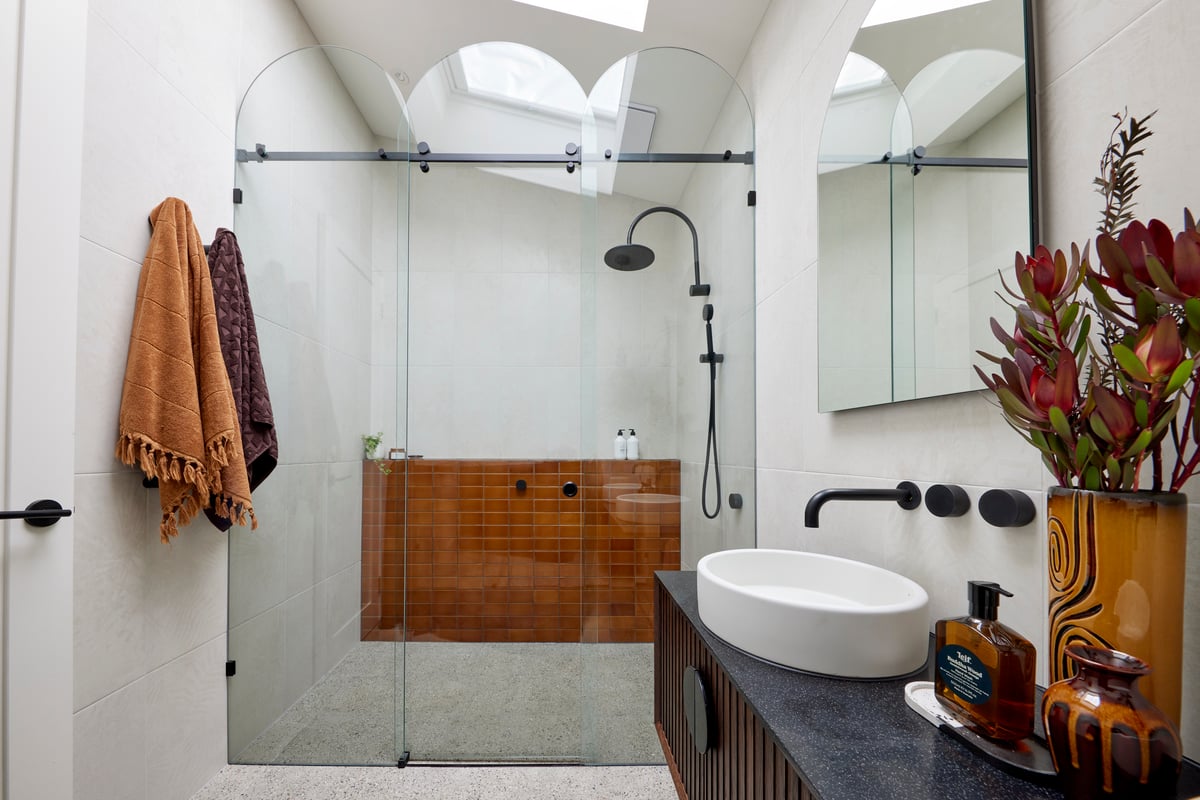 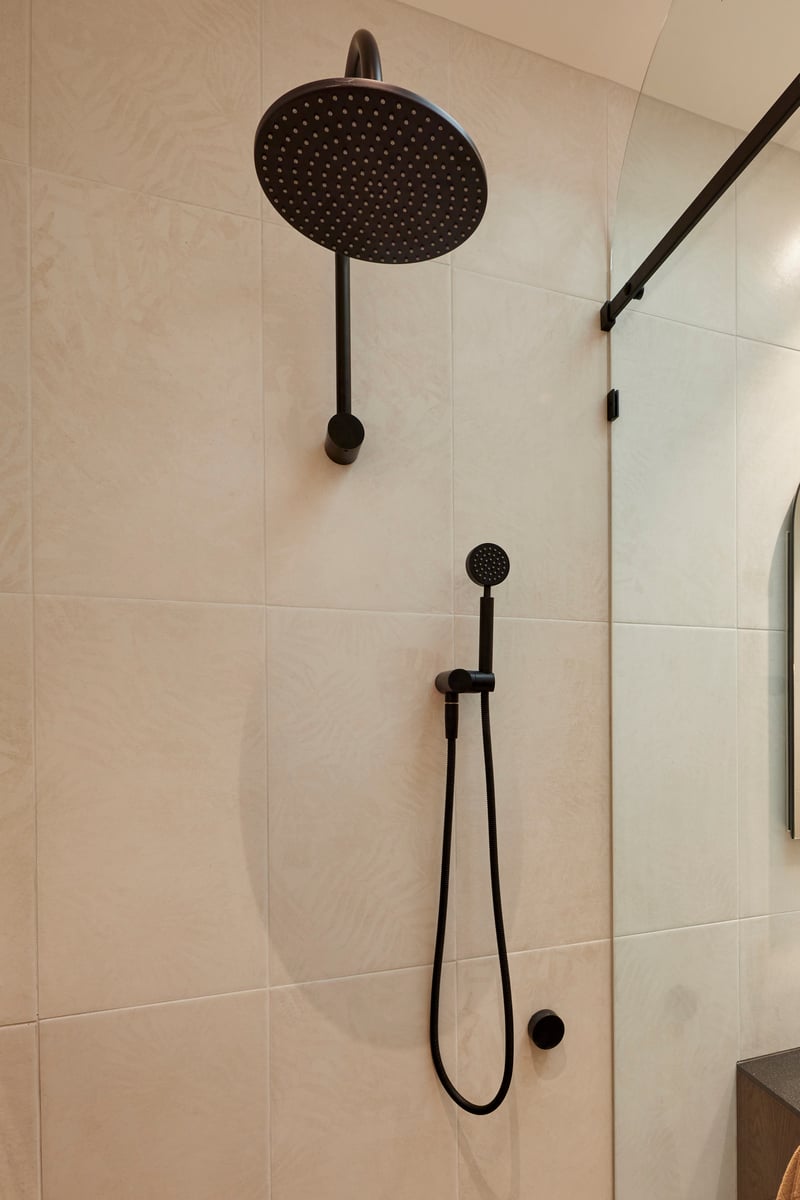 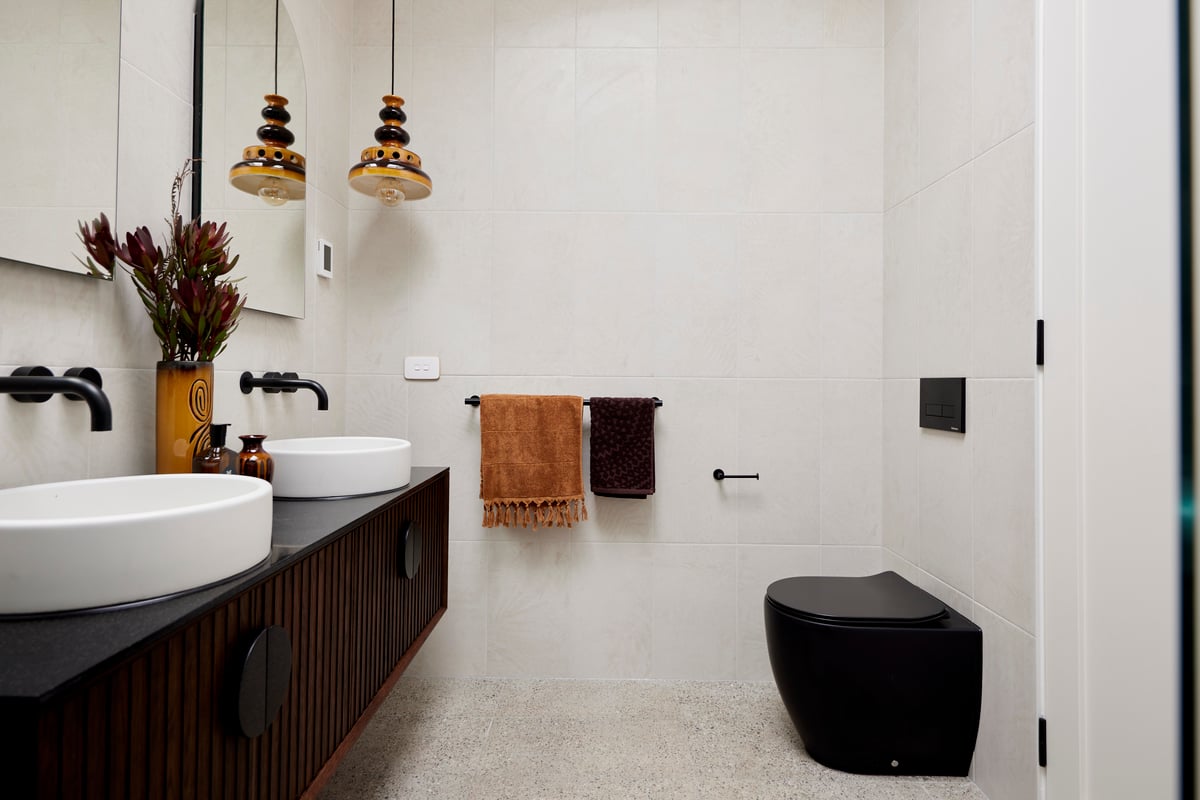 Next up were Love Island Australia's Josh and Luke, who spent $41,980 on their master ensuite.

After last week's disaster of a cinema room, the judges were impressed with Josh and Luke's indoor and outdoor bathroom.

"This is the level of sophistication that we've been asking them for," Shaynna said. "This is something you'd get when you book a weekend away."

"I would want to have a bath in there every night of the year," Neale added.

Although the judges felt that an outdoor bathtub was a risk for Melbourne's cold weather, they thought that the room was very functional, thanks to the ample heating used by the twins.

"If they keep doing the same style throughout the house, they're going to be pretty hard to beat," Shaynna added. 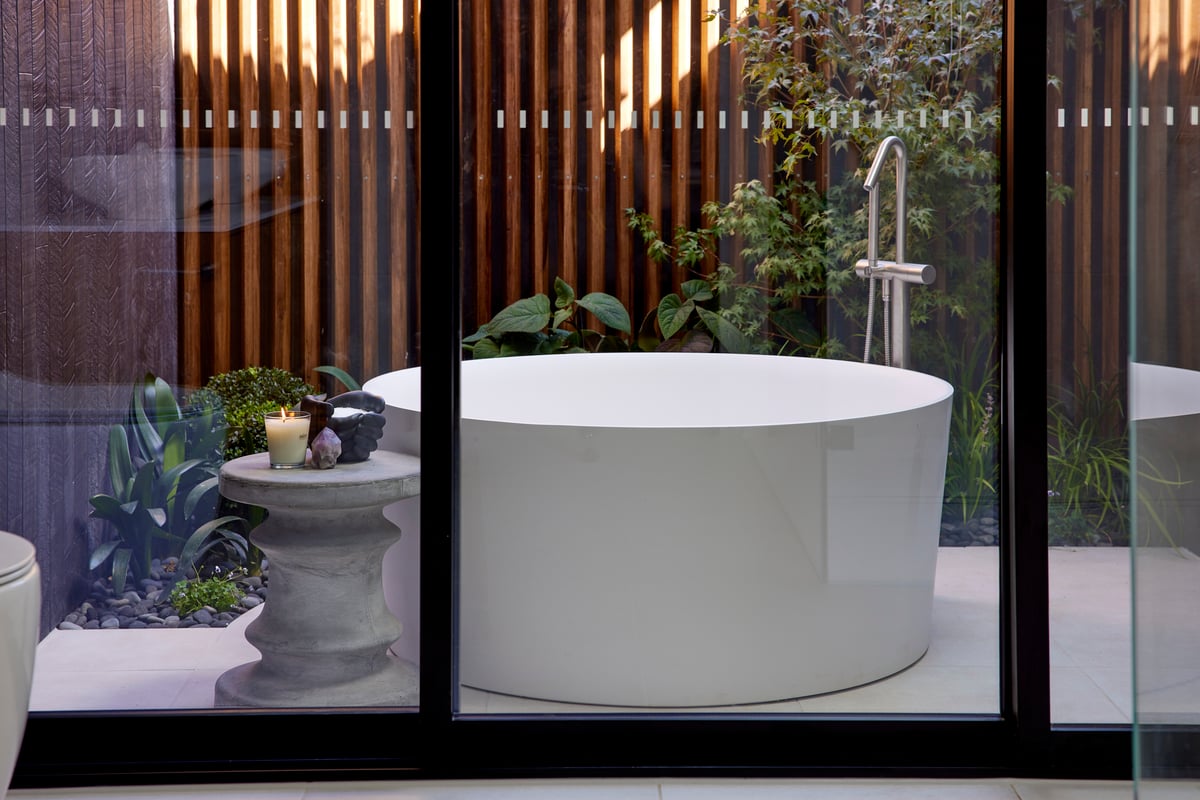 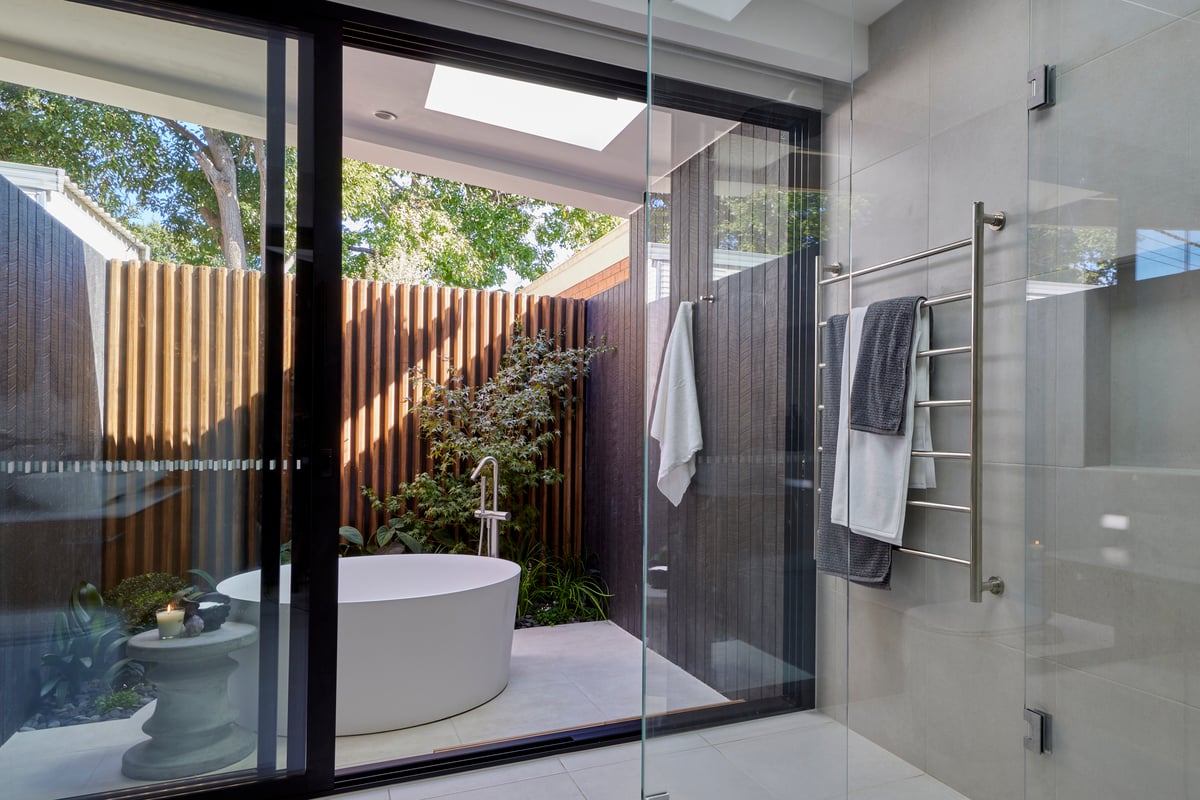 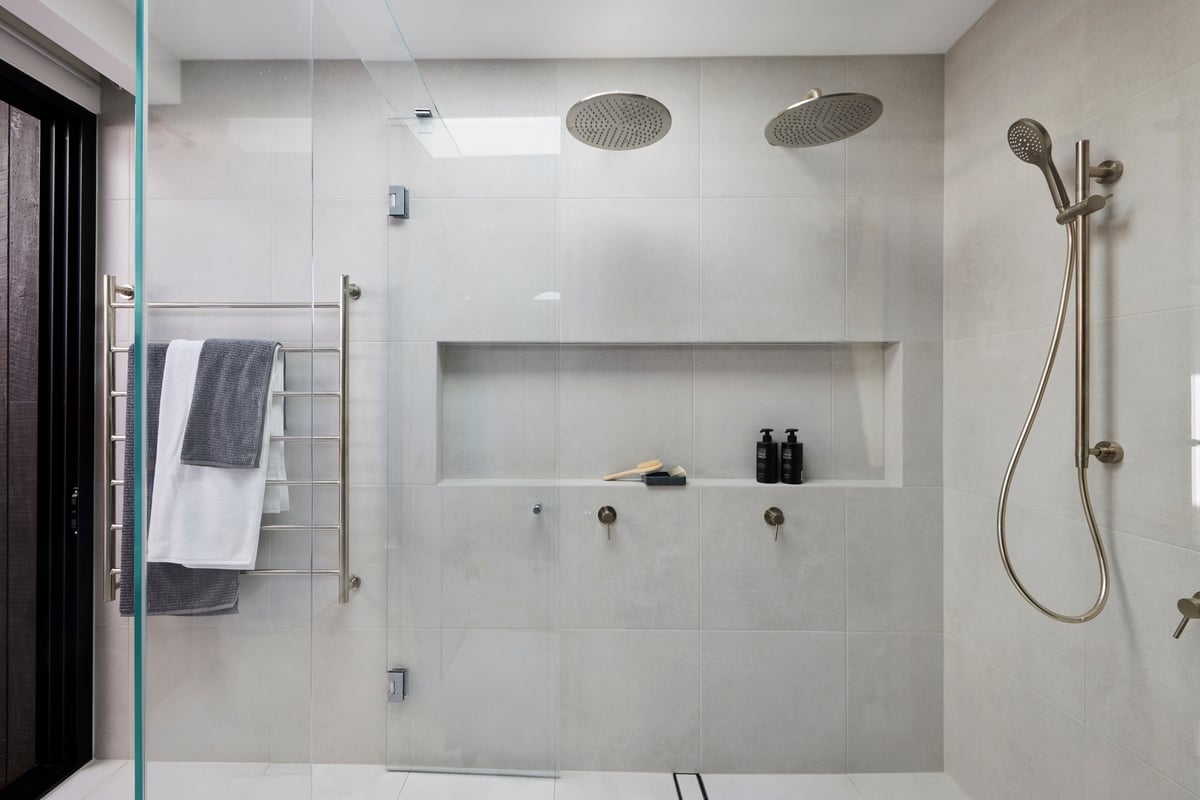 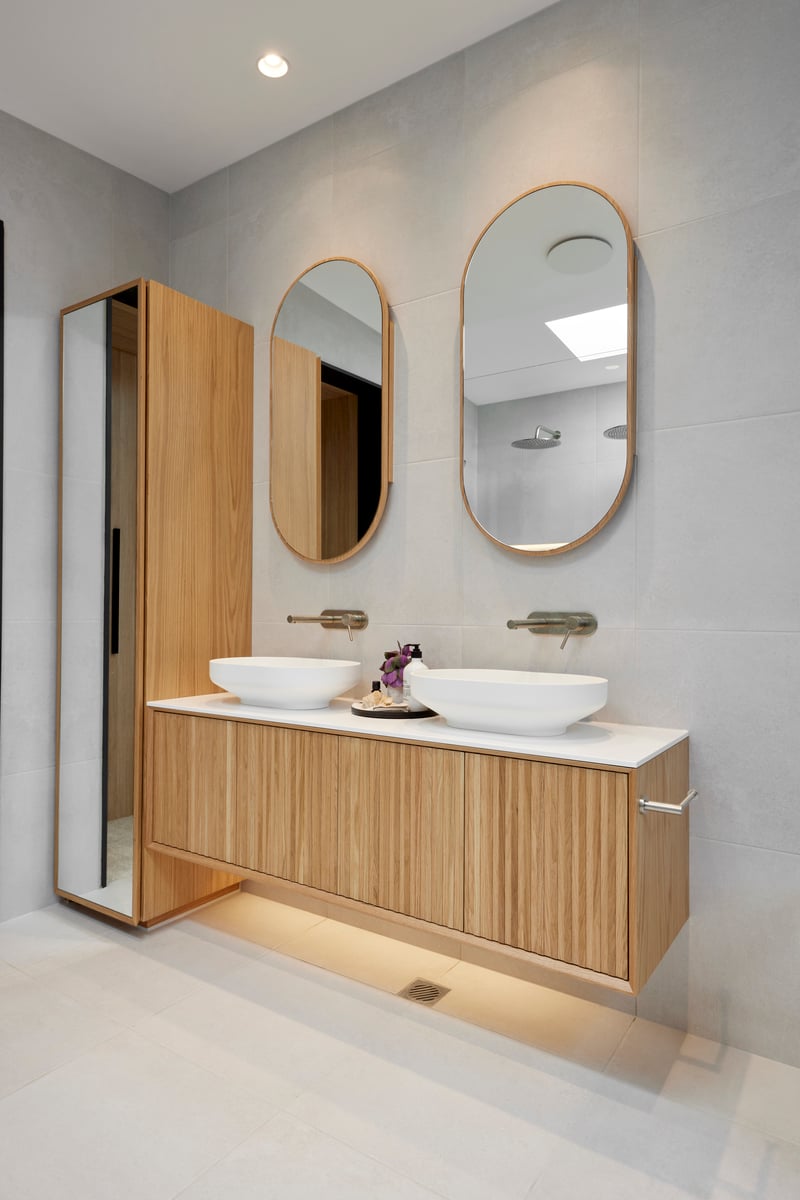 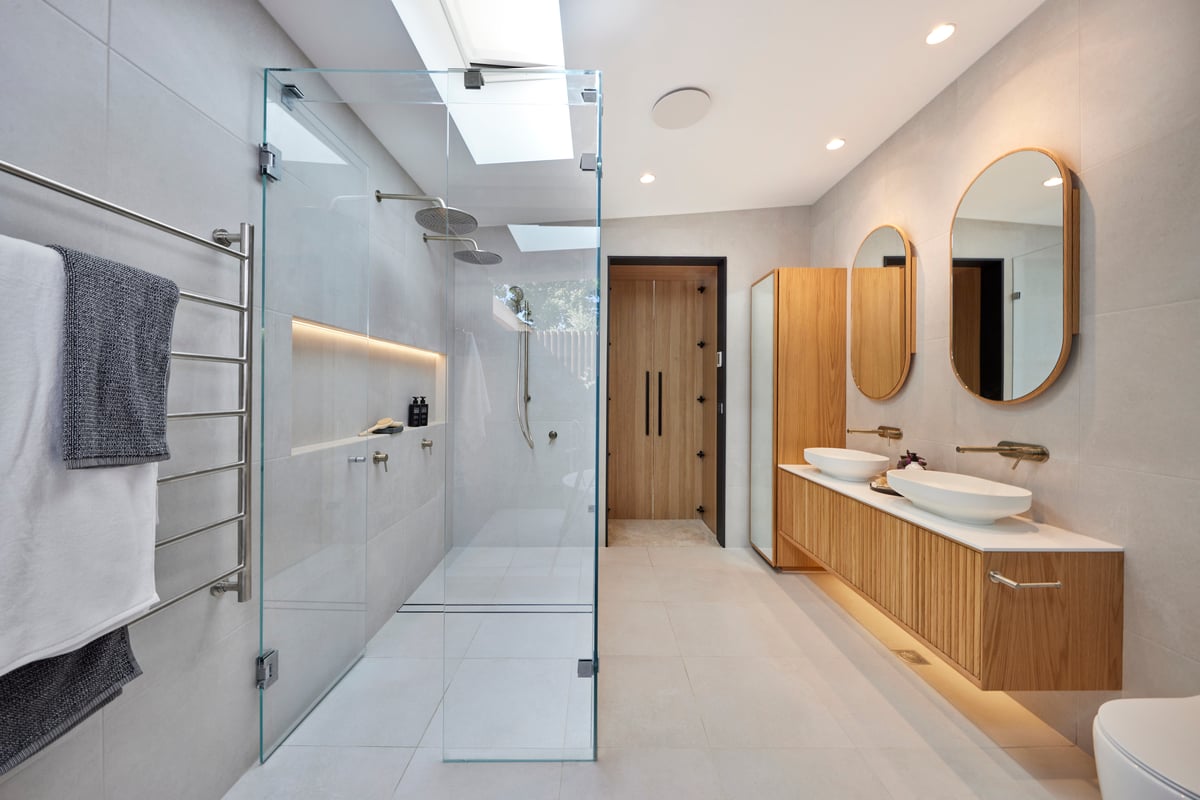 Kirsty and Jesse spent $28,045 on their master ensuite this week.

Overall, the judges thought Kirsty and Jesse's ensuite was on trend and sophisticated.

While Shaynna loved the basins, tiles and taps, she felt the shower screen was too small.

"When you're doing these bespoke luxury looks, you need [the shower screen] to work in with the height of the tile," Shaynna said.

She was also concerned about the distance from the shower to the bathtub, as well as the placement of the shower taps.

"You're going to have to clean that bathtub every day," she said.

Despite those few functionality issues, Neale was impressed.

"It feels fresh and glamorous," he said. 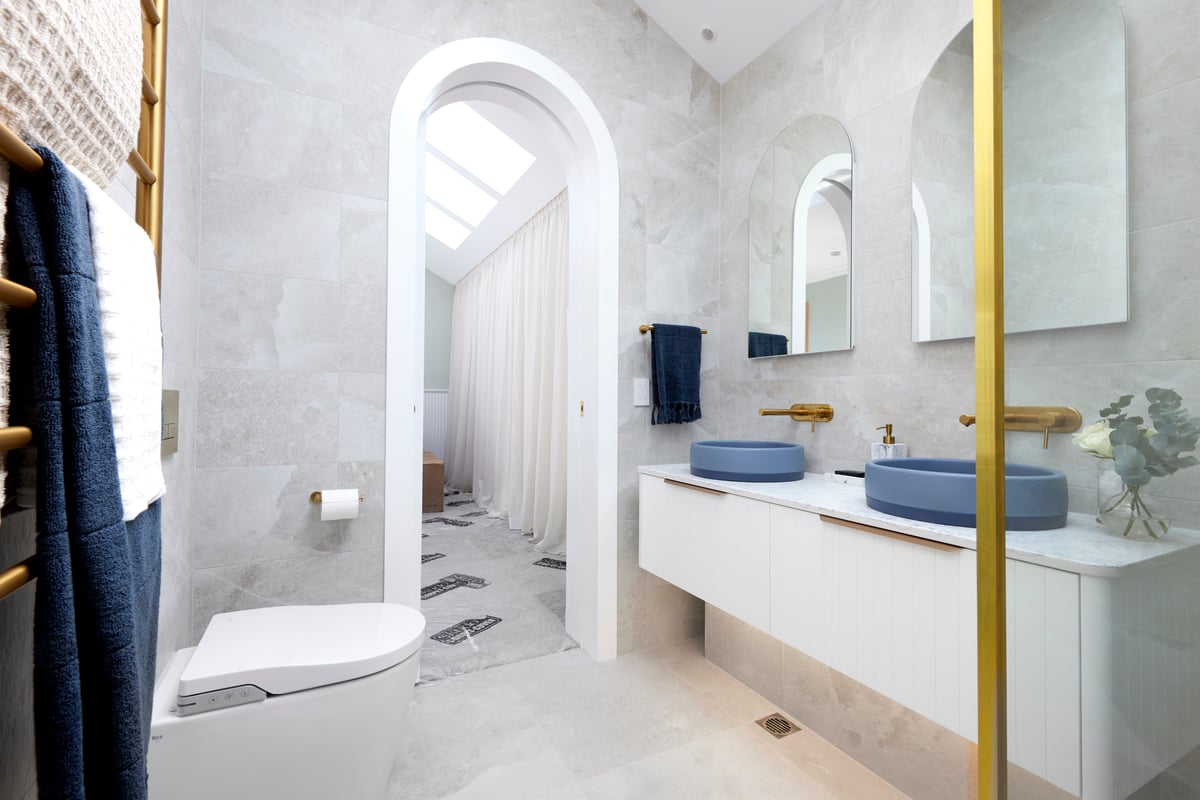 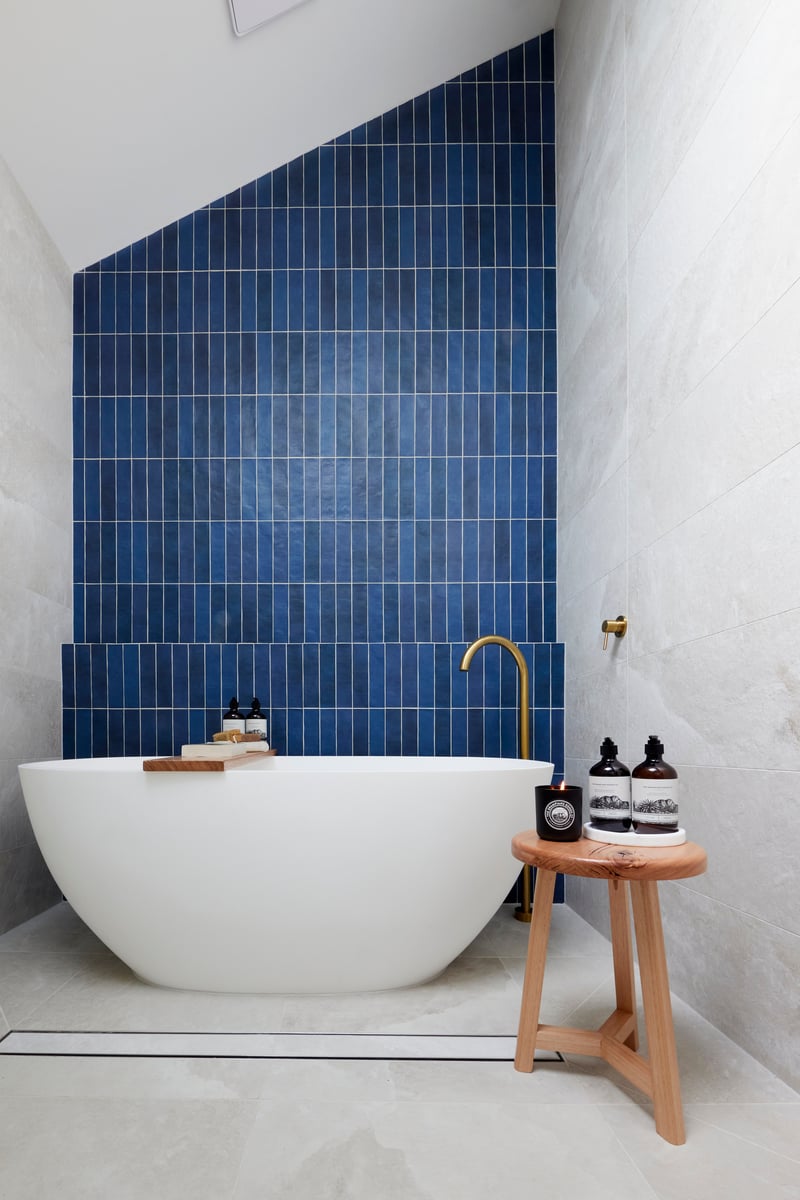 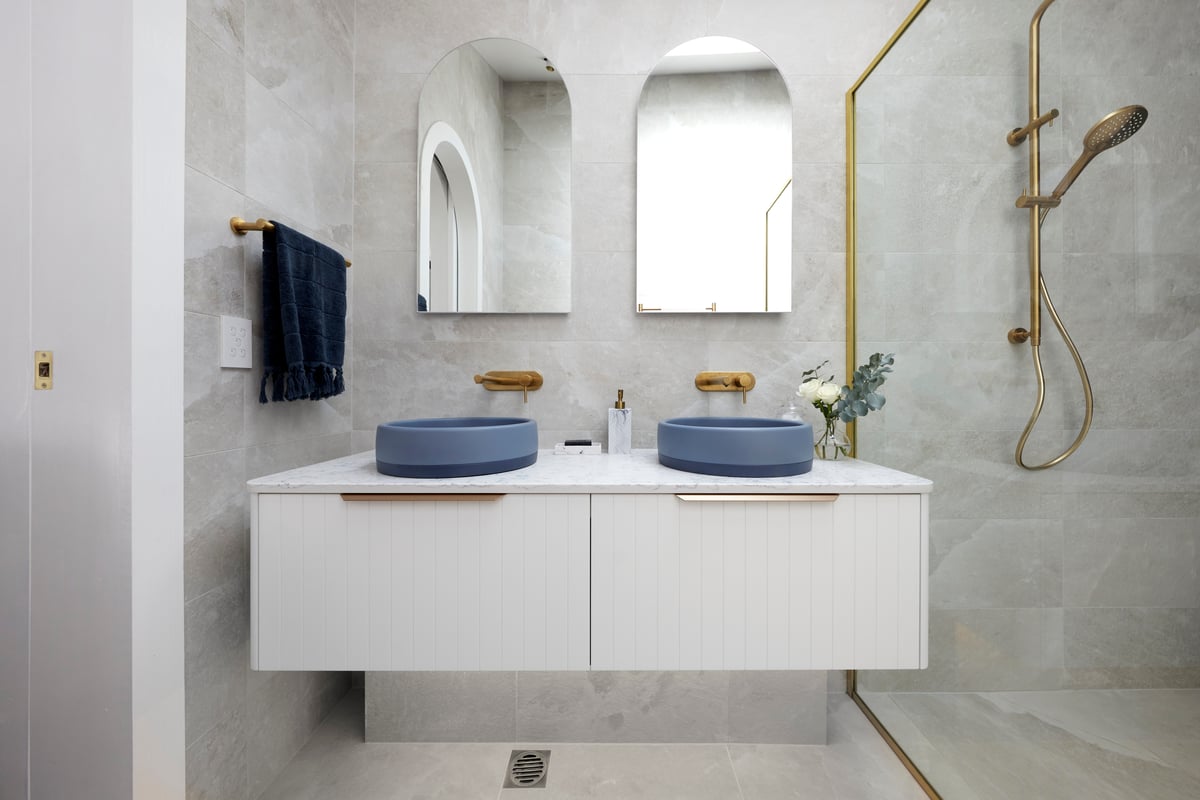 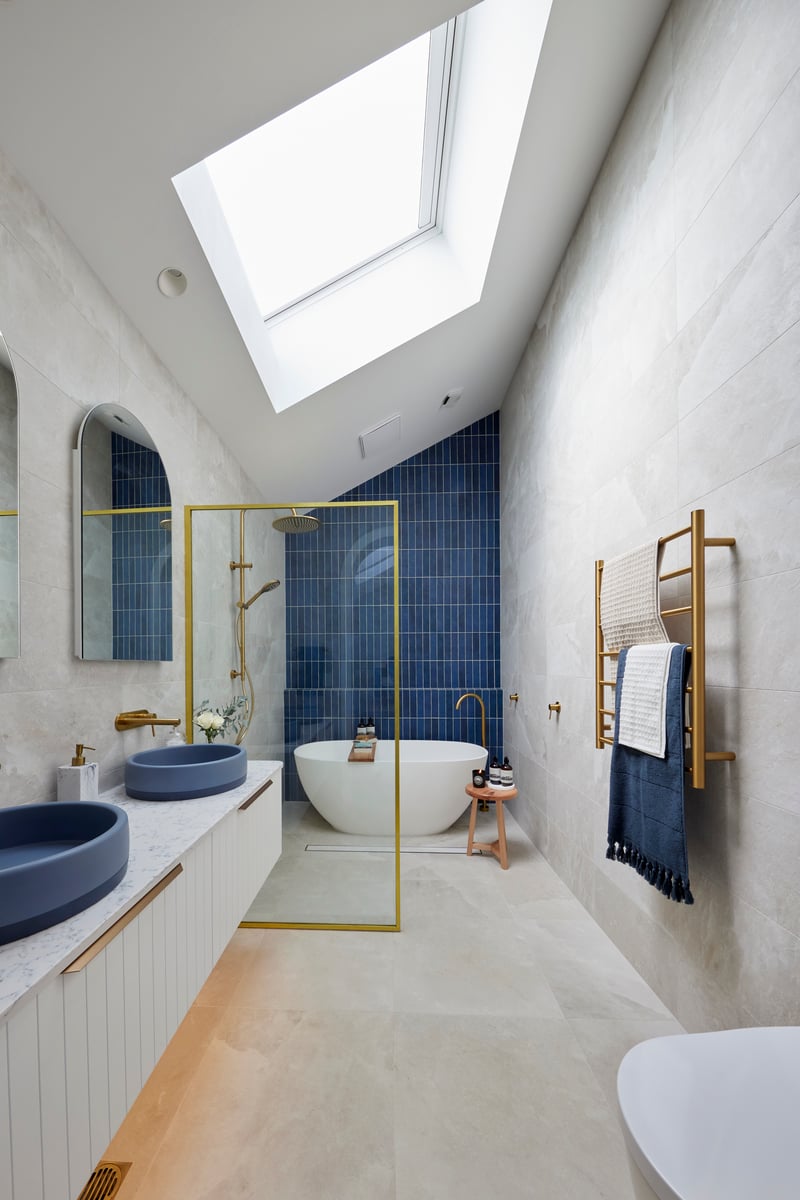 The judges' scores are tallied, and Ronnie and Georgia take out the win after using their bonus gnome to gain an extra point.

Reply
Upvote
Top marks to Josh and Luke for the tall cupboard, a lot of the time the bathrooms don't have nearly enough storage. But the outdoor bath doesn't strike me as very practical. What if you want to have a nice hot bath in the middle of winter, while it's pouring rain? It might work in Queensland, but this is Melbourne. And is it my imagination, or do several of these bathrooms not have doors? That is a huge hell no in my book.
News
General
Opinion
True Crime
Politics
Sport
Explainer
Entertainment
Celebrity
Reality TV
Movies
TV
Books
Rogue
Royal
Lifestyle
Beauty
Fashion
Weddings
Home
Wellness
Health
Fitness
Travel
Food
Parents
Before The Bump
Pregnancy
Baby
Kids
Teens
School
Parent Opinion
Work & Money
Money
Finance
Career
Lady Startup
Relationships
Sex
Dating
Separation
Friendship
Family
Real Life
Couples