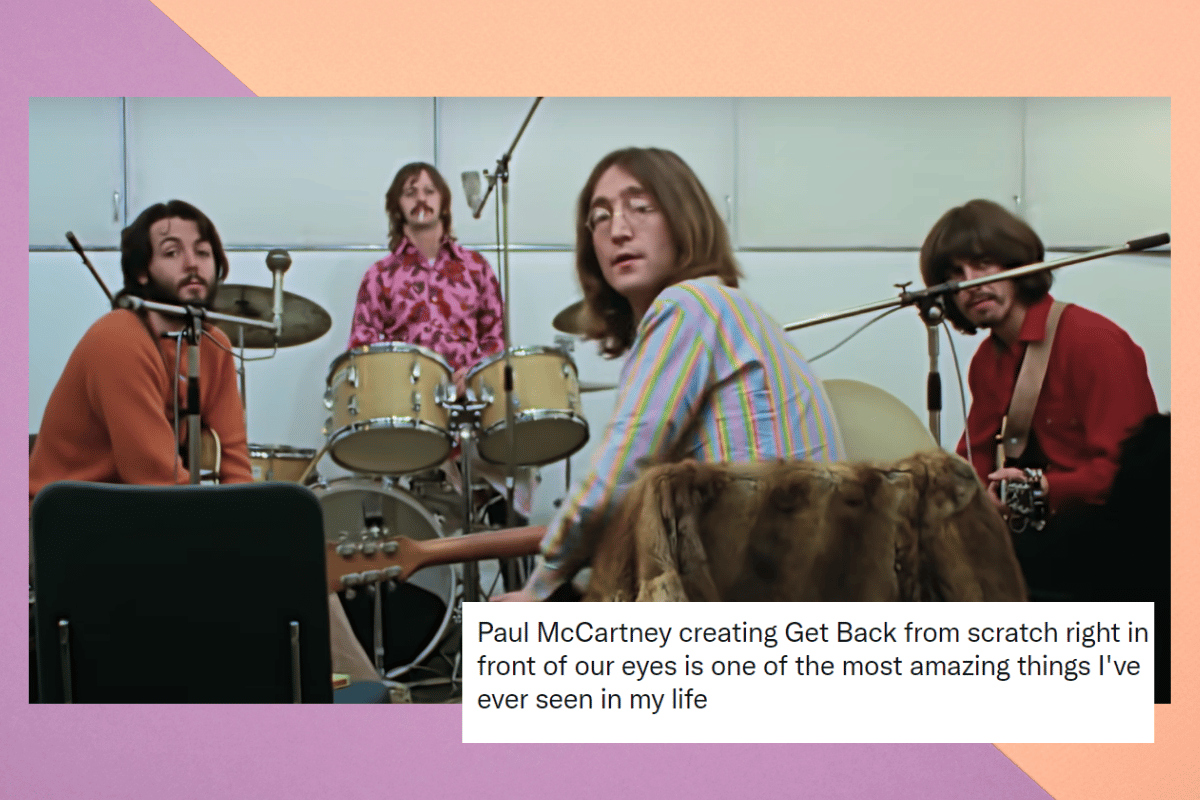 It's no secret The Beatles were always one step ahead of the game musically.

Regarded as the most influential band of all time, the Fab Four redefined pop music in the space of just seven years.

But it seems the band's influence stretches far beyond music.

Watch the trailer for The Beatles: Get Back below. Post continues after video.

You see, roughly half a century before reality TV was even a thing, The Beatles filmed a reality TV show about themselves making an album.

And yes, it might be the best reality TV show of all time.

Directed and produced by Peter Jackson, new Disney Plus documentary series The Beatles: Get Back follows the making of The Beatles' 1970 album Let It Be, which was originally set to be titled Get Back.

The footage used in the series was originally filmed for Michael Lindsay-Hogg's 1970 documentary, which showed the inner workings of the band as they rehearsed for their forthcoming album and rooftop concert.

But across eight hours, The Beatles: Get Back is about more than just making music.

There's bickering and chain smoking and enviable fashion. And honestly, if you added confessional videos, The Beatles: Get Back would almost be like watching Big Brother.

Amid the release of the series, here are the most notable moments from The Beatles: Get Back, as told through tweets.

Paul casually predicting the furore around The Beatles' split.

Paul casually predicting the narrative of the next 50 years of The Beatles history #GetBack #TheBeatles #TheBeatlesGetBack pic.twitter.com/RZuNbC3Tkm

my favourite bits of #TheBeatlesGetBack are when paul john and george and like arguing or figuring something out and the camera pans to ringo sitting there like pic.twitter.com/5g7LRXqRr6

Ringo Starr in #TheBeatlesGetBack is such a vibe. Just sits there listening & watching, joins in on the drums when he needs to & then after a fairly large amount of time where he has said nothing, just says “mashed potato” when asked what he wants for lunch. An icon. pic.twitter.com/Tegf8gZ8gb

Every shot of Ringo when the other Beatles are fighting in #GetBack pic.twitter.com/YgCgJTxpCi

haven’t watched the Beatles documentary yet but my main takeaway so far is that Paul McCartney apparently posed for baroque paintings in a former life pic.twitter.com/nC3wRdglv1

Watching Get Back and am completely unnerved by how absolutely smoking hot I'm finding 1969 Paul McCartney.

The endless bad vibes at Twickenham.

Yoko Ono, Linda Eastman, and the women of The Beatles.

this close to passing the bechdel test pic.twitter.com/dOoi4odmCv

This was Yoko Ono when The Beatles were recording 🤣 #GetBack pic.twitter.com/EtbeE95QJw

I’m only half an episode into The Beatles documentary but so far I can really relate. I also sometimes went and sat extremely quietly with men I was dating while they played music with their friends and I also did not break up those bands.

Paul casually writing the biggest songs of all time.

Paul McCartney just sits there at the piano and writes Long and Winding Road and Let it Be while people are buzzing around him and talking about other stuff. #TheBeatlesGetBack

Watching Paul come up with “Get Back” out of literally thinking air while Ringo and George just yawn is a marvel to watch. This Beatles documentary is INSANE #TheBeatlesGetBack pic.twitter.com/09Nii0tHqr

Favorite part of #TheBeatlesGetBack so far is Mal Evans! pic.twitter.com/eLCZs3xkgT

The facial hair and the fashion.

The true secret to the Beatles success is that each member of the group could grow a truly epic beard. #getback #getbeard pic.twitter.com/8IP4H9PWI1

let's all come to an agreement that george's outfits ate the whole episode 1
A WHOLE SERVE #TheBeatlesGetBack pic.twitter.com/AlNpshFJfa

Another shining piece of Beatles history: John discussing how important the last show being a guerrilla style show instead of a rehearsed show being and Ringo casually stating out loud “I’ve Farted”. The amount of humility this band has is insane. #TheBeatlesGetBack pic.twitter.com/iiGiMTcnv2

And a few things that didn't happen at all.

my favorite moment from the beatles doc pic.twitter.com/UWaeoKV0gi

That time Paul McCartney was in Gryffindor. #GetBack pic.twitter.com/EUCuwcUqyL

This part from Get Back really captures the dynamic between Lennon and McCartney pic.twitter.com/V7MAplTm9Q

My favourite moment from the Get Back documentary pic.twitter.com/TOObCC5QYL

incredible to watch history unfold before your eyes pic.twitter.com/CRbet2ah7t

I wanted to see if Austin Powers looked normal in the Beatles documentary and it turns out yes. Yes he does. pic.twitter.com/qKTM3ZROdY

this part was shocking pic.twitter.com/TKz1ehiqqz

OK this was the my fav part of the Beatles documentary pic.twitter.com/R8SEe7lW8p

The Beatles: Get Back is available to watch on Disney Plus now.

Reply
Upvote
1 upvotes
The clothing is just incredible. I’m so excited for the late 60s/early 70s fashion revival that is about to happen because of this! 😍

Reply
Upvote
Might have to have a watch of this, I saw the clip of Paul writing Get Back and it really is quite amazing. I wonder what he and Ringo think, looking at all this now that so much time has passed.
L
laura__palmer 8 months ago

Reply
Upvote
1 upvotes
@rush about halfway through and it’s great. Would throughly recommend. You’re a fly on the wall and it’s just great watching them come up with these songs and what turns out to be a truly great album.  I’m wondering how they got there, really. So much tension and arguing and some horrible playing and writing. But they did it. Somehow, with everything going on, they actually get it together.
L
laura__palmer 8 months ago