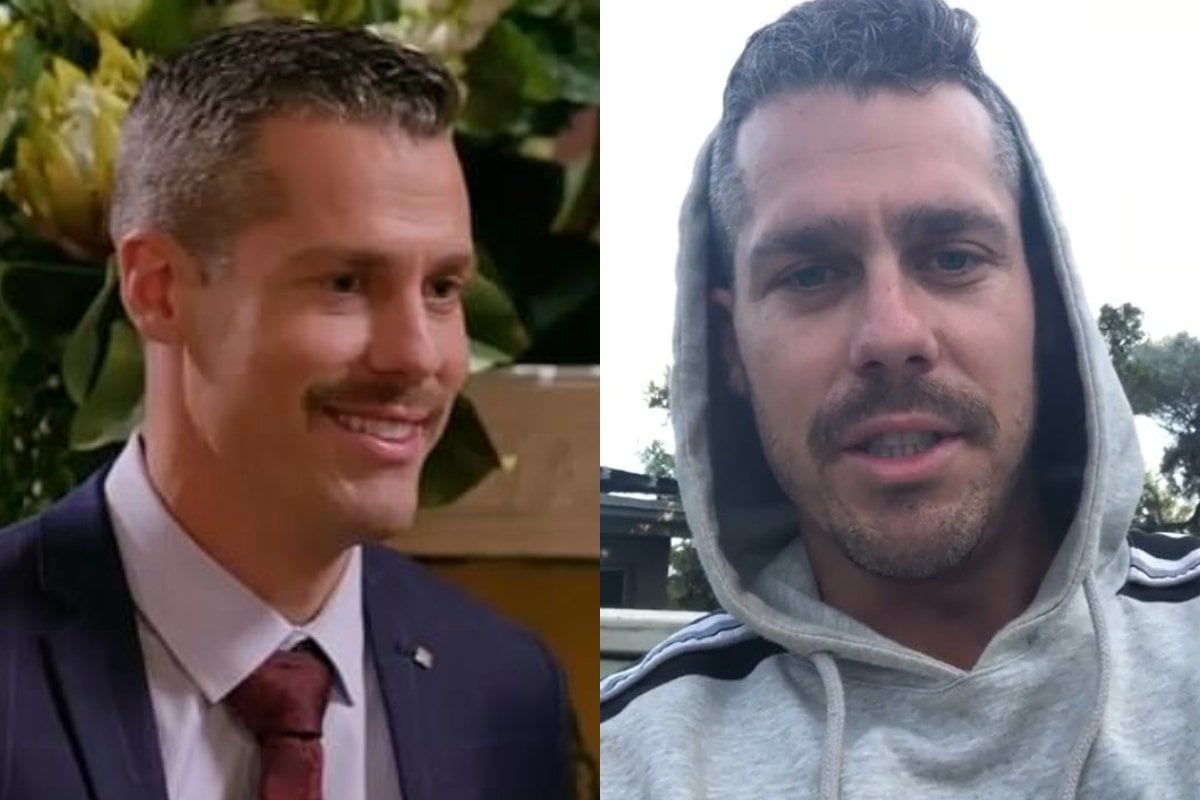 Last night, The Bachelorette gave us our first, genuine sense of drama for the season. And, oh so surprisingly, it appears it didn't go down quite how we saw it on screen.

As we saw, on the group date Becky and Elly Miles employed their cousin and a mate to snoop on the men while posing as bus drivers. During this snooping, Pascal Wallace - who we had barely heard from up until this point, tbh - made sl*t-shaming comments on camera.

Watch: Elly and Becky confront Pascal on The Bachelorette. Post continues below video.

"They're kissing everyone. Throwing out kisses left, right and centre. Anyone's game," Pascal declared during the ride.

Nevermind the fact the premise of this show is two women dating a series of men at the same time in hope of finding the one. And heck, who in their right mind would pick their potential forever-person without... kissing?

Perhaps, if that was an issue for him, Pascal should've 1. not gone on a show where this is the entire point and 2. looked internally, to figure out why he was threatened by female sexuality.

Then, at the cocktail party, Becky discovered Pascal had allegedly made additional gross comments, including: 'Could they find hotter chicks?'.

Obviously, Becky and Elly were p*ssed and confronted him, and Pascal denied the entire thing.

"Are you guys trying to create drama from nowhere?" he said, drawing the ire of all gaslit women... everywhere.

Elly then said it was time for him to leave, and so off Pascal went, swearing about looking like a "d**khead" as he walked towards a limo, never to be seen on a Bachelor franchise show again.

But since the episode aired on Thursday night, further details have come out about Pascal's time in the Bach mansion and his exit.

"He was there to stir the pot."

On Friday, Mamamia spoke to Harry Harris, who also left during Thursday's episode (of his own accord) about the Pascal drama and how it all went down.

According to Harry, the Pascal stuff was definitely "blown out of proportion" a bit, but overall he said having watched the show back, all the men have been portrayed accurately.

"He didn't fit in and he was a little bit different from most people," Harry said of Pascal.

Harry said he didn't personally hear any of the comments Pascal was accused of saying, and had (thankfully) already left the mansion before it all kicked off at the cocktail party.

It all started over a pack of cigarettes.

Okay, this is... rogue, but allegedly, 33-year-old Pascal found himself offside with the other men and being used as a 'troublemaker' by producers thanks to a packet of cigarettes.

According to The Wash, which quotes a 'well-placed source', Pascal had planned to quit the show like Harry as he felt no connection to either Becky or Elly, but producers weren't keen on a third walkout (after Ab Sow also left in episode one).

So they instead turned the other men against him, and it worked perfectly.

"Everything started when some of the guys ordered cigarettes on their weekly shopping budget, and Pascal laughed that he wondered what Elly and Becky would think about them secretly smoking around the mansion. A producer then tried to convince him to dob them into the sisters, but he didn’t want to, but eventually agreed as he was leaving anyways," the source said.

Then a producer told the other men Pascal was going to throw them under the bus, which then caused them to create their own plan to sabotage him.

"Some of the guys then dobbed Pascal into the sisters for 'trash talking' them, but he mostly just made a couple of jokes with everybody else, that were then taken completely out of context and blown into this huge thing. That's why there was no footage of him saying he wanted 'hotter chicks' or anything like that."

Pascal confirmed the account on Instagram, saying he had already decided to leave when he was convinced by producers that telling Becky and Elly about some of the men's smoking habits was the right thing to do.

Obviously, this didn't go down well, and saw the others turn on him.

Speaking of 'out of context jokes'...

Remember the scene early in Thursday's episode where Pascal seemed to forget Becky and Elly's names?

According to a now-deleted post on his Instagram story, this was during a conversation where he was joking about some of the men's Melbourne accents(?), which made it sound like they were saying Ali. He said production removed all this context, to make him look like the bad guy.

He also replied to a comment on his post-show video saying the same thing: "I'm teasing the Melbourne boys because they can't pronounce her name and pronounce her name Ally, instead of Elly... it’s a joke, like everything I've done on the show."

What else has Pascal said?

In completely non-shocking news, Pascal released a video defending himself following his exit from the show.

Ahhhh what an edit, I’m an easy target what can i say, not who I am. Thanks for the experience @channel10au and sorry to the girls if what I apparently said made you feel anything negative, never my intention. Spread love not hate ✌️🙏🏽 good luck, hope you both find love @ellymiles and @happylittlebeckymite

"I feel like I need to defend my position, it's not how I feel about the girls and the way I am going to be portrayed on national television is not who I am as a person," he said.

"Elly and Becky were fun, beautiful girls, wholesome, good to be around and good value, which is how I always felt."

He said he did talk about the kissing (which is on camera so... yes, we know): "Because it's the weirdest experience to watch these friends you've created in the house kiss the girl that you're after... it's weird and you can understand that."

He said Aggi's comment about Becky and Elly not being 'hot' enough "just didn't happen".

He also said he and Harry both dislocated their shoulders on the wakeboarding group date (Um, WHAT?) and spoke that night at the hospital about leaving the show on their own terms.

He told producers, which then led to the ol' cigarette dilemma above.

Goodness, and we thought this season would be less dramatic than the others.