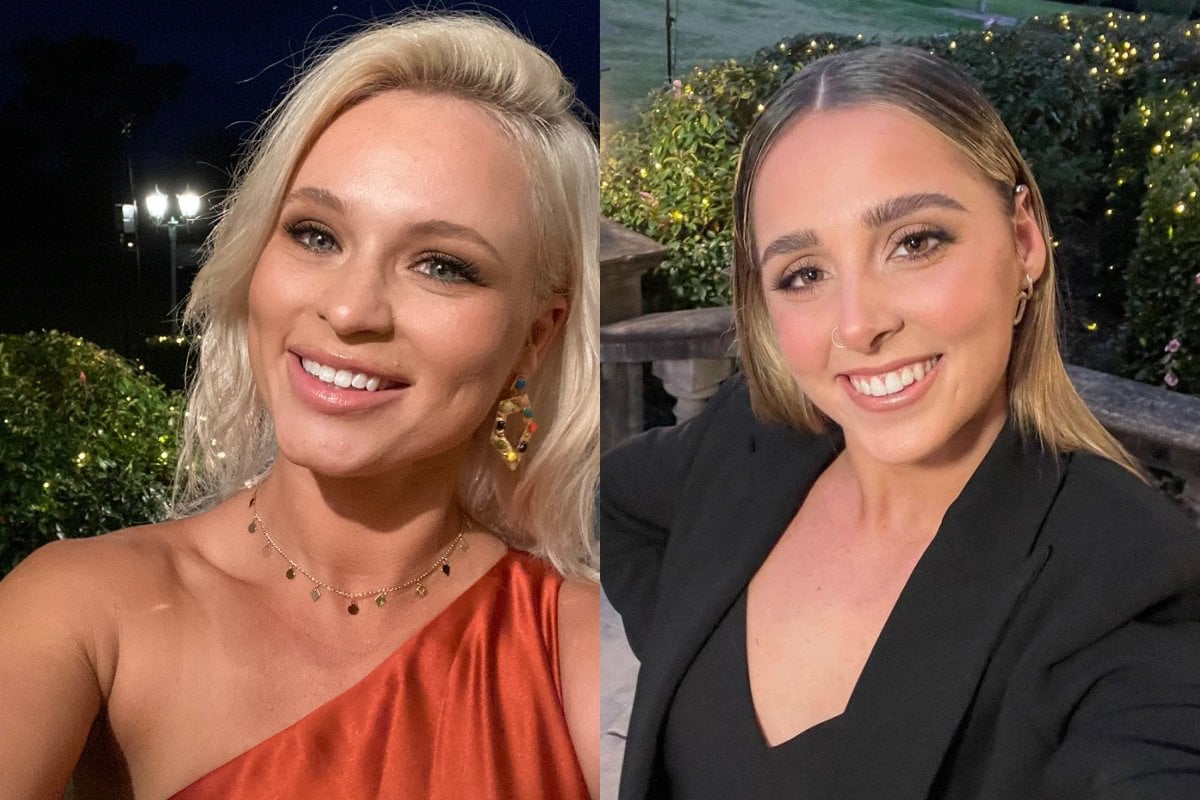 It turns out this year's Bachelorette mansion has spurred more than one love story for us.

While we're still waiting to see how Brooke's love story turns out in Thursday night's finale, Holly, who left the show at the end of Wednesday's episode after she and Brooke's relationship hit road-blocks, told Mamamia in her exit interview she is now happily dating fellow contestant Millie.

"Millie and I were really good friends in the house. I think you form these really strong bonds with everyone very quickly when you're thrown in to this experience all together," she explained.

"Then coming out of it all, we both live in Sydney so we caught up a couple of times and went for walks and then did lockdown Zooms, and it just was a really easy progression on top of that friendship.

"I'm absolutely, absolutely thrilled and couldn't be happier with her."

"It's a little bonus love story!" she laughed.

Watching a show where you and your current girlfriend both date your ex-girlfriend at the same time is no doubt a little bit... bizarre, but Holly said she has now fully "closed the chapter" on her Bachelorette experience.

"I don't think I really fully closed it until last night, because you're waiting and then you're re-watching and reliving and going through it all again. So [her final episode] filled that chapter. And it was a very amazing and life-changing chapter."

Holly and Brooke ultimately didn't work out because they hit road blocks about children and where they would live in the future. It's not usually a conversation you'd have after just a couple of dates, but reality TV speeds up the normal dating process by... quite a lot.

"I didn't fully register what the pace of experience would be like until I was in it and [outside of the show], you don't talk about kids and 10 years down the track with someone that you've only known for a couple of weeks. So, it was a bit of a shock getting thrown in the deep end, at the very end, realising that we hadn't had these chats and desperately needed to, to figure out if it's long term, we were compatible."

In the end, their non-negotiables were just not compatible.

"I'm very proud of both of us, I think Brooke held herself very well," Holly said of their discussion, which was really difficult to watch.

"Although we have so much in common and had this really beautiful connection, we both realised that we had non-negotiables. I'm quite impartial to children, but if it were to happen, it wouldn't be a huge family whereas that's something really important to Brooke, and I wanted to go in being 100 per cent myself and to not say something I didn't believe in or be someone that I'm not just for the sake of a TV show. I hope that she's found a partner that will give her what she needs and what she desires."

During her time on the series, Holly spurred important conversations among viewers and media, including here on Mamamia where we wrote about how great it was to see someone ask for consent while interacting with someone they were dating.

"Consent is something that we don't necessarily get to see all the time," Holly explained. "And as women, a lot of us don't get to experience it, so that was something I was quite conscious of.

"It's really, really important to me around dating and around making people comfortable and just being a nice human. So I'm really glad that came across."

Overall, Holly said she was really stoked to be part of such a historic season of TV.

"I'm really proud to get to represent part of my community and to be on a platform that is showing us representation that until now, has not been seen on prime-time national television.

"I just hope that it helps other people, especially younger people, know that it's okay to be not necessarily different, but to be who they are, and that there are other people out there exactly like them."