We’re just one sleep away from the premiere of The Bachelorette and the new series is already generating a lot of drama.

Well, at least off the screen…

“The only super-trash we have here is MAFS,” Angie said, comparing Australian and British reality shows. “We do push, but we don’t push too far.”

“She thinks she’s better than us,” the reality star told the publication.

“She got her start by drinking on TV [Gogglebox] and now that she’s the Bachelorette, she wants to look down on people. Please, she’s dating 21 guys at once. She’s just a bogan and a hypocrite!” she continued.

Angie, who previously appeared on Gogglebox and I’m A Celebrity… Get Me Out Of Here!, will make her debut on The Bachelorette tomorrow night on Channel 10.

2. The first pictures of Hailey Bieber’s wedding dress are here and all we can say is ‘wow’.

One week after their (second) wedding, the photos of Justin Bieber and Hailey Baldwin’s wedding day are finally here.

Because we know this is what you’re here for, here’s all the photos the couple have shared so far:

“Last Monday was the most special day of my life,” the 22-year-old model captioned a photo from their South Carolina wedding.

For the ceremony, Hailey wore a custom lace wedding dress by Off-White, which featured a long veil with the words “TILL DEATH DO US PART” stitched into the bottom.

“Thank you for making my vision come to life and creating my dream dress,” Hailey wrote, thanking the designer. “You and your Off White team are incredible and I’m forever grateful I got to wear your beautiful creation.”

After getting married in an intimate ceremony in New York in September 2018, Justin and Hailey married last week in front of famous guests including Jaden Smith, Scooter Braun and Kylie and Kendall Jenner.

3. Turns out Love Island’s Adam Farrugia and Vanessa Sierra may have known each other before the show.

We might have just been introduced to contestants Adam Farrugia and Vanessa Sierra last night on Love Island, but it appears the couple may had already met each other before the show.

In a video published by the Daily Mail, Vanessa and Adam can be seen at a restaurant together with friends, back in May.

Last night, 27-year old Adam ended up choosing Vanessa, 24, to couple up with.

But the pairing didn’t last long, with Vanessa deciding to swap Adam with a different contestant, Sam Withers.

“He’s just got trouble written all over him,” Vanessa said after Adam picked her.

She then went on to couple up with a different guy altogether, Matthew Zukowski.

While we don’t know if Vanessa and Adam actually did know each other before the show, we do know that when it comes to Love Island, secrets have a way of eventually revealing themselves.  Especially if Grant’s not-so-secret girlfriend from last season is anything to go by.

4. “We haven’t brushed our teeth.” MAFS’ Cyrell and Eden respond to fans who thought they were ‘miserable looking’ at their baby’s gender reveal party.

Gender reveals have quickly become a THING on social media, with celebrities and non-celebrities alike posting the exciting moment they find out the sex of their child.

But because it’s social media, people aren’t always… supportive like they should be.

When Cyrell Paule and Eden Dally held a gender reveal party for their baby, ‘fans’ on Instagram criticised the couple’s ‘miserable looking’ photo after finding out they were having a baby boy – despite Eden’s excited remark about having “another little Eden”.

Cyrell posted a video of the reveal to Instagram yesterday.

There’s some moments in your life that truely take your breath away…. I’m so happy to announce @dallyeden and I are having a baby boy. You will be an amazing father… and cannot wait to share this journey with you and our little peanut …

But fans were quick to point out the couple didn’t look too happy in a different photo posted on Cyrell’s Instagram.

To all the amazing people that helped us with our gender reveal. Thank you sooo much for making our day memorable… the service you all provided was to perfection and @dallyeden will remember it always. @gender.reveals_ For gender canons @bubblemooballoons For balloons and gender balloons @label.me.up For labels and stickers @walla_abueid for the cake and desserts @blocksandprops for props @barrificbartending For making our drinks @royalsweetsbysherri for cookies and grazing table @plattercobyshannon …. you guys were great and appreciate your hard work

“They look thrilled,” one person commented.

Another wrote that the couple were “miserable looking”.

Cyrell, who already knew the sex of the baby, was quick to respond to fans, saying how happy she and Eden are about the baby.

“Everyone having a go because we didn’t have a BIIIG smile in our pic automatically means we aren’t thrilled about our baby,” she wrote on Instagram.

Instead, Cyrell offered a different explanation as to why the couple weren’t smiling.

“We haven’t brushed our teeth. That’s why.”

5. We’re calling it: Deni Hines is definitely the Unicorn on The Masked Singer Australia.

Guessing what celebrities are pretending to be furry animals in front of Lindsay Lohan has indeed become one of our favourite past-times.

That means there is still seven reveals to go, and tonight will be one of them – with Unicorn, Dragon, Monster and Spider set to battle it out for a position in the semi-finals.

And we think we know exactly who Unicorn is.

Judges have guessed celebrities such as Mel B, Kelly Rowland and Kelly Osbourne to be the dancing Unicorn. Oh, and Sophie Monk.

But they would (probably) be wrong. Because obviously Unicorn is Deni Hines and we have evidence. 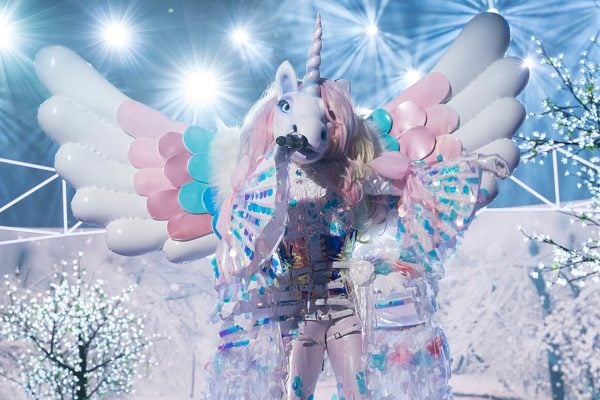 Let me present the evidence. Ahem.

Clue: "We are creatures born of legends, with bloodlines through the ages."

For more clear signs Deni is the Unicorn on The Masked Singer, read our earlier article here.