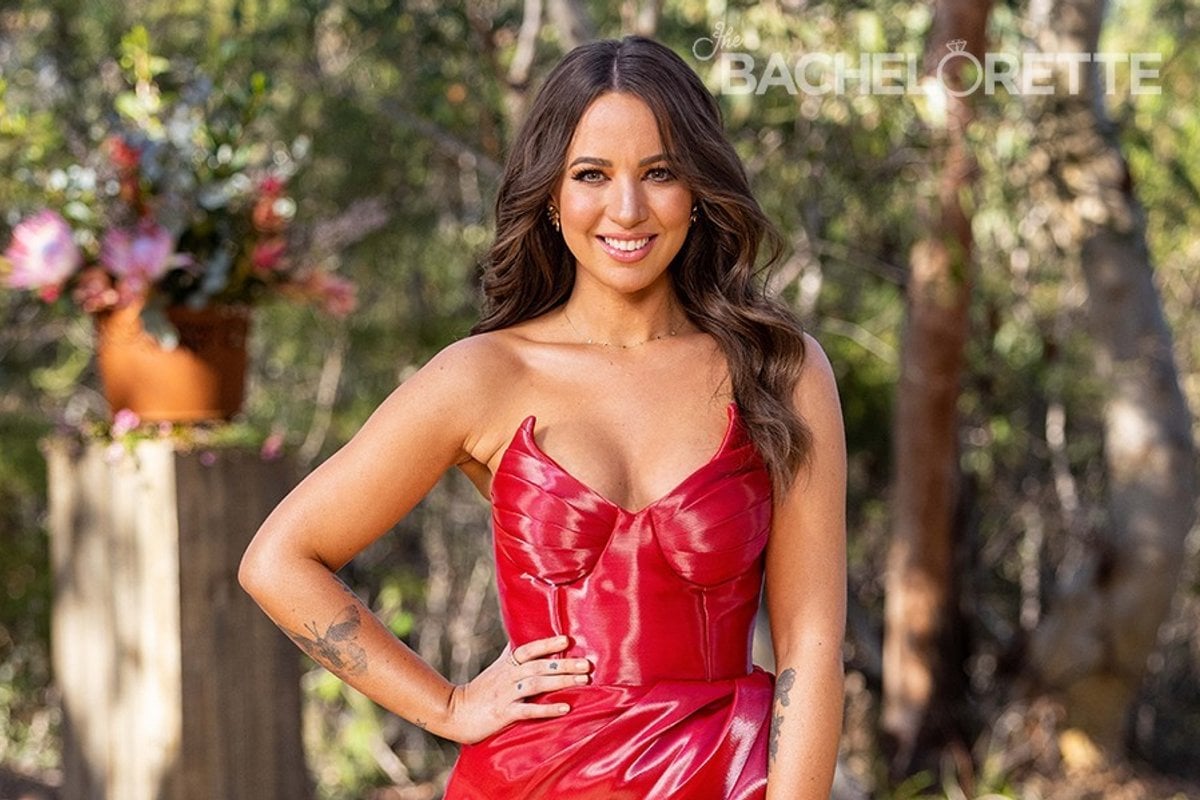 It didn't take Jamie-Lee Dayz long after she stepped out of the car in that beautiful red dress on Bachelorette finale day to realise it wasn't going to be her.

That is one benefit - or downside, depending on your outlook - of knowing bachelorette Brooke so well. The pair had been friends for years, after initially meeting when they were both contestants on Nick Cummins' season of The Bachelor, and while that made a great springboard for their relationship, it wasn't enough for Brooke to choose her.

"I feel like throughout the whole season there had just been little moments where I feel like, because I know Brooke, she would look at me and there was no words needed and I think that was truly the case on that on that final day," Jamie-Lee told Mamamia after the finale aired.

"The minute I saw her I could tell that she was deflated. And her heart was breaking as well, and especially her heart was breaking for me. So I kind of knew pretty early on and I'm kind of glad. I think in these situations there aren't words that can describe how you're feeling but yeah, it was definitely difficult."

As she stood there, being broken up with by a woman she loved, Jamie-Lee felt a conflicting series of emotions.

Yes, she was heartbroken. But she was also happy for her friend's newfound love.

"I have always cared for her as a person and as a friend. And then I develop these romantic feelings. And it was really difficult to differentiate the two at that time because I wanted to care for Brooke, but also my heart was, you know, completely shattering at the same time," she explained.

"So it was really difficult to kind of juggle those emotions, then seeing the girl that you love crying in front of you because she's letting you down. It's just a really difficult, difficult one to navigate, and I just wanted to let her know that no matter what had happened, you know, I think she was being true to herself and she was doing it in the most respectful way."

Jamie-Lee said she was grateful to have a really strong support network who helped her navigate the days, weeks and months after the finale was filmed, and things had actually become more clear for her after watching the season.

"Watching it back has been tough, but it's also been really nice to see how strong Brooke's connection with Darvid has been and it makes me feel like she made the right decision. I can see that. I can respectfully step aside and be like, 'No, you followed your heart and I'm happy for you'.

"In normal dating life you don't really see the other people that your person is dating. So if someone chooses someone else over you, then you're kind of bitter because you're like, 'how can they have what we had', but I've been able to see that connection. From day one you knew it was electric [between Brooke and Darvid] and I feel I feel lucky to be able to say that because it's like, 'Well, okay, I understand why you made the decision that you did.

During the finale, Jamie-Lee explained to Brooke's friends that she wouldn't be able to stay friends with Brooke if they didn't end up together.

But even though she's lost a friend, Jamie-Lee is happy she put her heart on the line.

"If I didn't, I would have forever kicked myself. But at least now I know that, whilst it wasn't meant to be I think we still really have had a really beautiful love story. And it just ended exactly where it was meant to."

While the experience didn't work out how Jamie-Lee hoped, she is excited to see what happens next.

"I'm just taking each day by day, and I'm really excited to have my life back and get out there in the dating scene and hopefully meet someone special."