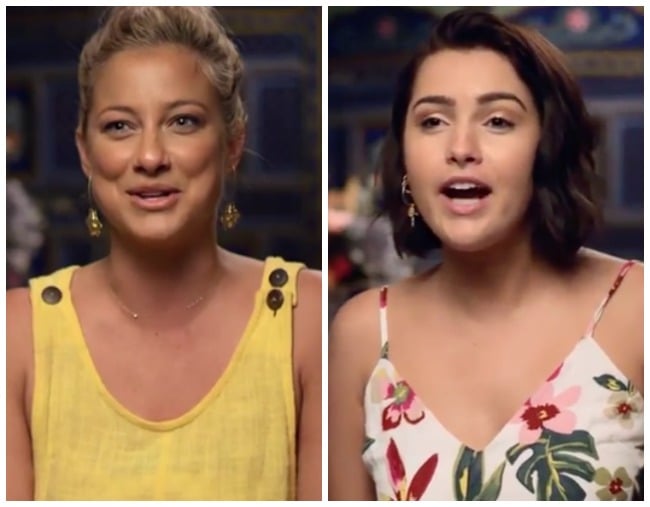 After Wednesday night’s episode of The Bachelor, I think we can all agree on three things:

For anyone who missed it, the drama began when 25-year-old Tenille returned from her single date with the Honey Badger having kissed him – even though she’d previously said she wouldn’t kiss him on a first date.

You see, the interesting thing about humans is that sometimes they change their minds, and also context is a thing. So even though we can be adamant about certain decisions, we often behave differently in the moment, and it’s precisely no one else’s business.

Except one person decided it was their business, and that person was Romy.

Romy took it upon herself to confront Tenille, asking her why she said it was "gross" to kiss Nick when he had kissed so many other women, and then went ahead and NOT ONLY kissed him, but also told everyone about it.

Tenille explained that she never said it was gross, and reasoned that while in her normal, day-to-day life she probably wouldn't make out with a guy who was dating a dozen other women, she's on this show and....

"Then why are you on The Bachelor?" Romy said. "You know what The Bachelor involves." At this point, Tenille decided to walk away, but moments later, she was approached again. When Tenille tried to explain that she actually never said the thing Romy was accusing her of, Romy looked her straight in the eye and yelled: "WOW MAN DON'T BE SO AGGRESSIVE" and Tenille decided to run away from the mansion, which honestly seemed like a fairly reasonable response.

READ: The Twins recap The Bachelor: Er… it actually just became too mean.

Barefoot and crying somewhere outside the mansion, Tenille told a producer she just couldn't be there anymore, because of how badly she was being treated. Eventually she returned, much to the dismay of Romy and Cat, who said they wished she had "kept running".

In the same episode, Cat joked with three other contestants about an intruder named Deanna who tied her t-shirt up to 'show her midriff', even though she didn't have 'good abs'.

For Australian audiences, Romy and Cat's shaming, bullying and gaslighting of other contestants crossed an important line, resulting in widespread outrage.

#BachelorAu should be ashamed of themselves for encouraging for ratings behaviour like Romy and Cat. We all know these shows like villains, but seriously this is disgusting!

Can’t stand watching these girls. Not okay for television. Channel 10 should know better that #bitchiness #MeanGirls should not be given so much air time #notentertainment #Bachelorau

@TheBachelorAU 1/ I honestly can't believe @Channelten would allow some of the most disgusting bullying behaviour from two grown women I have seen to not be edited or kicked out! We all understand you have "villains" on #BachelorAu but when are you going to draw a line. Cont..

As a nation we fight bullying daily in schools, the workplace and our social media. #BachelorAu WHY OH WHY would you allow a contestant to openly bully people and class it as television? I’m sorry but this made me feel sick.

Oh my god, this trio of women in #BachelorAu are unbelievable. They're not even fun-bitchy to watch. They're just disgusting. Such vicious, horrible people. Gross behaviour from them, gross of @channelten to be keeping them in.

The overall sentiment is that the cruelness of people like Romy and Cat shouldn't be aired during prime time on national television, because it suggests that it's normal, acceptable, and even amusing. Those women shouldn't be there - and the fact that they are indicates Channel Ten's tacit approval of their behaviour.

Throughout this season, however, I've been observing something very different.

For the first time in my life, I'm seeing nuanced experiences I've had placed in the spotlight, and an overwhelming sense of universal understanding that it's a painful, frustrating and lonely place to be in.

I remember being 14 and not having the language or the self-confidence to pinpoint why I was so hurt when a group of friends ran away from me at a shopping centre, then told me it was "just a joke".

I remember feeling so powerless when I tried to ignore the girls who constantly made fun of the way I looked, the way I dressed, and what I said, only to have them approach me over and over again asking me why I was being so sensitive.

I remember mustering up the courage to stand up for myself and being told I was "aggressive" or "overreacting".

I remember being exasperated while trying to explain that tearing apart everything about me wasn't the same as just "being honest".

Last night in particular, it was vindicating to see this very experience reflected back to me on television. And to have the bulk of Australia's viewership identify it, talk about it, and decide that it's not okay.

The power of being gaslighted lies in its ability to make us feel entirely alone - like we're going insane.

The term comes from the 1944 film, Gaslight, starring Ingrid Bergman. In the film, Bergman’s husband wants to steal her jewellery, and realises he can do it by having her dismissed as insane and taken to a mental institution. To make her feel crazy, he sets the gaslights in their home to flicker on and off, and when Bergman’s character reacts, he tells her she’s just seeing things.

What happened on The Bachelor last night was that an entire country saw the gaslights.

Romy’s gaslighting bullshit is so fucked up. Reminding me so much of an old co-worker who made me so perpetually anxious I had to leave a job I loved. #BachelorAu

As someone who was gaslit by a coworker and had to leave a job I loved because I nearly had a nervous breakdown, I genuinely have had enough of Romy. She is abhorrent and her behaviour is absolutely disgraceful. Get her off this show. #bachelorau

Did Romy do gaslighting then? Was that a gaslight?
Romy - ‘Why did you say it was gross?’
Tennile - ‘I didn’t’
Romy - ‘Yeah but why did you say it?’
Are we using that right? #bachelorau

If we can have a conversation about what this behaviour looks like, how isolating it can be, and why it's so dangerous, we empower people experiencing it to trust their instincts.

And in doing so, we go just a little way towards removing its power.

I’ve watched villains on this show, but none like Romy. Kiera (few seasons ago) was fun to watch. She was bitchy and she knew it. She absolutely knew it. Romy on the other hand, gaslights. She traumatises people and then turns it back on them to make them think it’s their fault. She’s done it numerous times. If forcing herself onto Nick wasn’t enough, the gaslighting just cements that she needs to do some soul searching.

This is a good read Clare and great insights.

I agree, although I'm sure Bachelor producers and Channel ten wouldn't care either way (whether viewers were entertained or disgusted by the behaviour) as long as they had the numbers (and thereby just as bad as the mean girls in my opinion), it's a great thing to see that 'gaslighting' has been highlighted and therefore identifiable. Who knows how many people this might help who are experiencing it right now. For those people to just be able to go "You know what, your attempt at gaslighting me is rather pathetic." and walk away from the perpetrator would be a fantastic outcome.