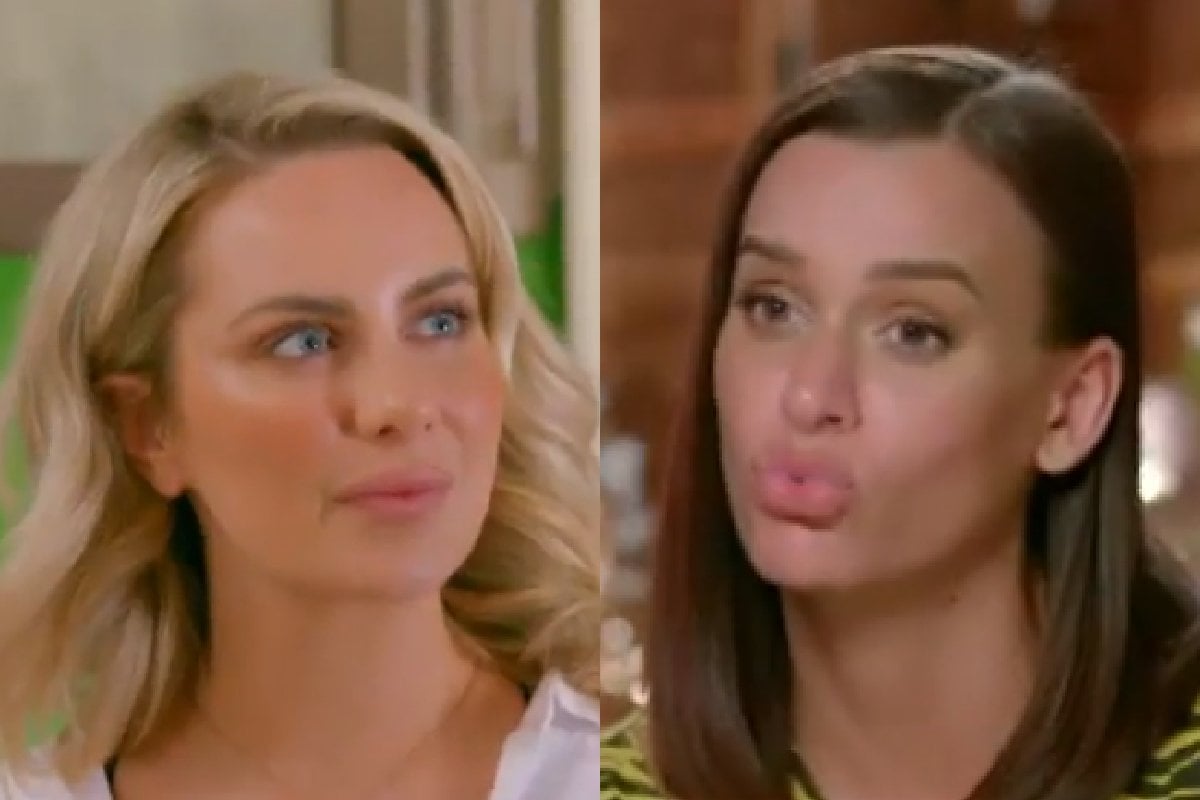 We open on the women discussing that time one of them called another a... kent.

It's sad for them because two years ago a contestant called the Bachelor a dogkent and now we have kind of high expectations for our kent-based drama.

One woman says she just wants to forget about the drama and get a bit of Vitamin Jimothy into her. Good for her!

Osher arrives with a single date card and each and every woman thinks it's going to be for her. Even my good friend Sierah.

But of course it's for Stephanie because... drama and also... gossip.

Jimothy has decided to take Stephanie for a ride in a... flight stimulator... to see whether they're a good team in the... cockpit.

They sit in the pretend plane and say things like "thrust leaver" and "going down" and it's all very exciting for Osher who's definitely hiding in the backseat. 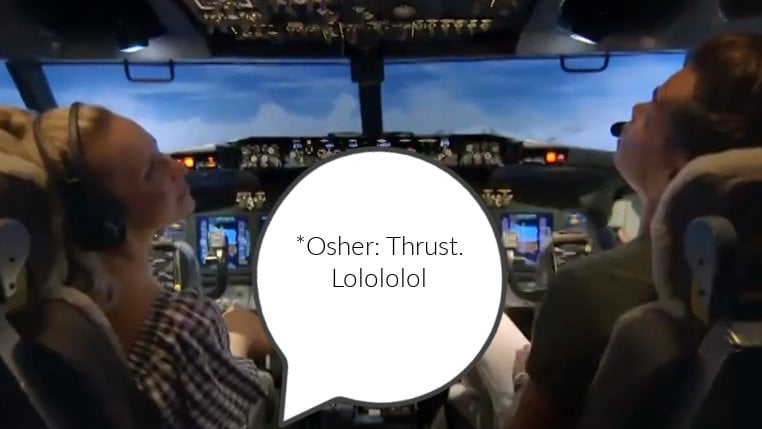 "No guys, they're in the cockpit hehehehehe."

Stephanie says the experience has "tickled her pilot fetish" and that's terrifying for the entire aviation industry both domestically and abroad.

Next, they go to a hotel where they have separate rooms to get ready in before heading to the National Maritime Museum for some din dins.

Stephanie tells Jimothy all about her pilot fetish but nothing about that time she called Holly a kent.

They kiss and then Jimothy gives Steph a rose because they have a "mutual appreciation of aviation".

Ten of the women meet Osher at the beach and then Jimothy does a slow-mo Baywatch run next to his tall friend Finn.

They explain to the women that they have to participate in a... board relay.

Back at the mansion, Steph has just arrived back with her rose. She tells the women she had a little "smooch" with Jimothy and my good friend Sierah is not impressed.

Steph asks her whether she's not happy with her having a date with Jimothy, and Sierah looks her up and down and says "nah I'm happy for you".

Then she does this face: 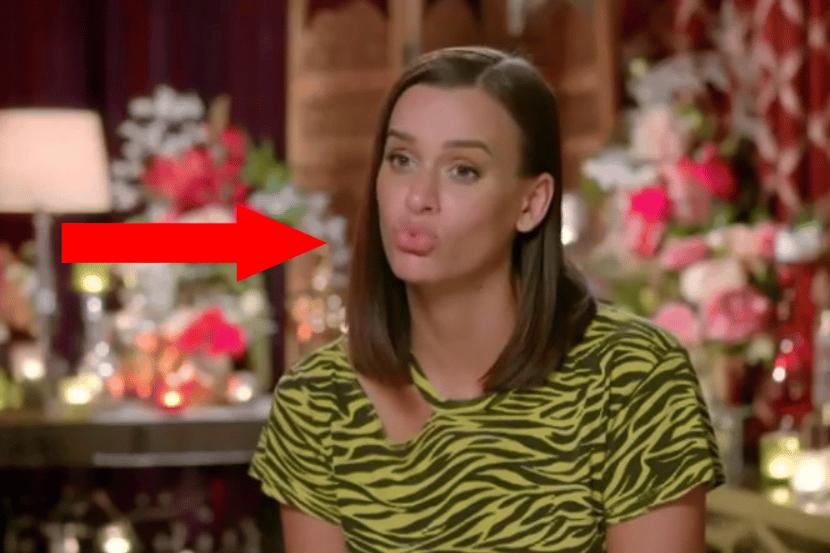 She asks Steph how she's feeling about her connection with Jimothy and Steph says... "better than yours".

Honestly, I would watch a Golden Girls-esque spin-off where these two just live in a house together and wait for each other to come home from dates so they can say bitchy things and make faces.

Back at the group date, Holly is drowning because she wasn't traumatised enough being called a kent in the last episode.

She's sent to the hospital, and it's almost as though women shouldn't have to compete in a series of physical challenges to get to spend time with a man???

Back at the beach, a woman named Tatum has decided Holly did a fake drown to get some more time with Jimothy.

So decides to spend the time quizzing tall Finn about Jimothy. Her strategy works, and she gets the rose from Jimothy.

For reasons unknown, the women have dressed up as their spiritual animals.

Stephanie has come as the.... GOAT.

And Tatum has come as a hawk. She explains that her spirit animal likes to prey on the other spirit animals and sweetie we already have Steph and Sierah, we needn't another villain.

Holly says she's come as a turtle because of her hard exterior and her soft interior and Tatum looks like she wants to pick her carcass off the ground and place in it her giant nest.

Holly then tries to guess what Tatum is and guesses that she's a... bin chicken.

One woman laughs hysterically while the rest of them sit there awkwardly.

Here comes my good friend Sierah who has come dressed as a phoenix.

She explains that she actually wanted to come as a koala because she loves a nap and also had chlamydia that one time. 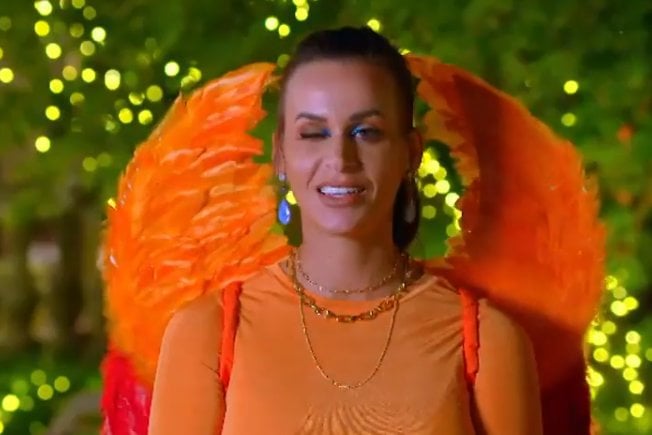 GOD I LOVE HER.

Jimothy arrives as a wolf and mate, you've really missed out on the opportunity to come as some kind of bird and keep these aviation puns going.

He says he's a cuddly wolf and yuck, please.

Tatum is telling some of the other women about how Holly called her a... bearded chicken. It's sad for her because she doesn't understand the actual insult was so much... worse. 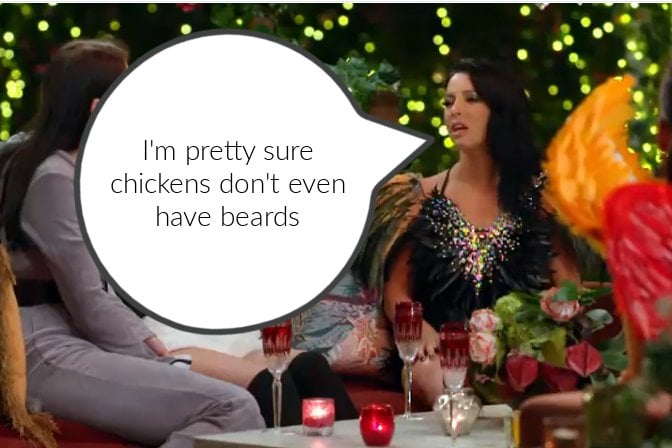 "It's so embarrassing for her."

Ash takes Jimothy into the spa for approximately three hours, so Laura (gosh, I've missed her!) decides to climb a tree. 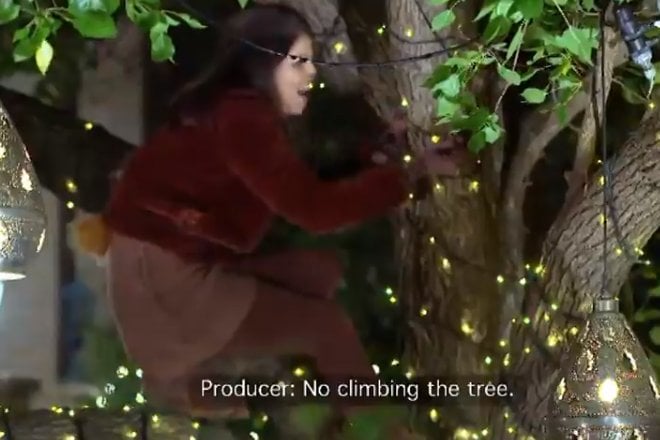 She then crawls along the ground while the other women start making animal noises and humping the couches.

THIS IS WHAT HAPPENS WHEN YOU PUT 15 WOMEN IN COSTUMES, PLY THEM WITH ALCOHOL AND GIVE THEM NOTHING TO DO.

Sierah is annoyed that "sneaky little b*tch" Ash got a rose.

A woman named Elena? Alannah? who I have never laid eyes on is sent home.

Catch up on the rest of Keryn's recaps here:

Mamamia recaps The Bachelor: You can't just call someone... that.

Mamamia recaps The Bachelor: IT'S GAME ON, B*TCHES.

Mamamia recaps The Bachelor: A tense photoshoot leads to a confrontation at the cocktail party.

Mamamia recaps The Bachelor: One woman won't stop talking about how much she hates... pilots.