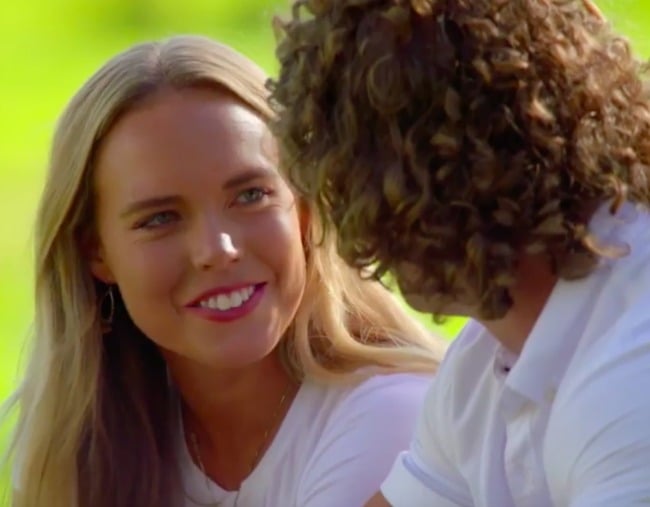 Over the last few weeks, a couple of rather odd clues have pointed to an unlikely Bachelor winner: Cass Wood.

While Brittany Hockley and Brooke Blurton emerged as early frontrunners, with Sportsbet’s odds listing Brittany, Brooke, and Sophie as most likely to win, an Instagram video posted last week gave a big hint it’s actually Cass who ends up with Nick Cummins.

In the video, 23-year-old Cass’ friend even zooms in on the ring, as Cass shows it off to the camera.

THEN, on Saturday, Cass uploaded an innocuous picture of her with a dog and a juice in Manly.

The picture was tagged 'Dolce Terra Manly,' which, one dedicated Mamamia writer noticed, was the same place Nick Cummins was at on Saturday.

Why were they at the same place? Is it pure coincidence? Or were they having a secret meeting?

While these clues have some convinced it's Cass who wins the show, I'm far more sceptical. Here's why.

In previous seasons, Bachelor contestants have gone to frankly ridiculous lengths to keep their relationships private.

Ahead of the finale for Matty J's season of The Bachelor, the Daily Mail appeared to camp outside both Matty J and Laura Byrne's homes, in order to confirm that yes, both were absent for an entire weekend, and yes, they returned to their residences just hours apart. Similarly, Sam Frost and Sasha Mielczarek were pictured cuddling inside their hotel room on the day of The Bachelorette finale, spoiling the result.

Tabloids went to these absurd lengths, of course, because the couples WERE DEFINITELY NOT hanging at a cafe together in Manly, in public, in broad daylight.

The stakes are simply far too high for the winning couple to be a) flaunting engagement rings, and b) hanging out on a Saturday.

In fact, I'm entirely convinced we already know who wins, and it's not Cass.

Before she'd even had a proper conversation with Nick, she was by far the favourite on Sportsbet. Why?

Because unlike with other types of bets, there are a handful of people out there who already know who wins when the show starts to air. So if there's a clear favourite from the outset - it's likely because those people have cleverly placed their bets.

There's also no reason in particular for people to be so convinced of Britt's win, unless they have inside knowledge. She hasn't had a great deal of air time, and has only been on one single date with Cummins, unlike Brooke, who's just had her third.

Then, more recently, there's Cummins' accidental confession that he ends up with a brunette, and Brittany's social media interactions with his family.

I'm convinced it's Britt, with Brooke coming a close (and devastating) second.

Who do you think wins this season of The Bachelor?

Listen to the latest episode of Bach Chat.