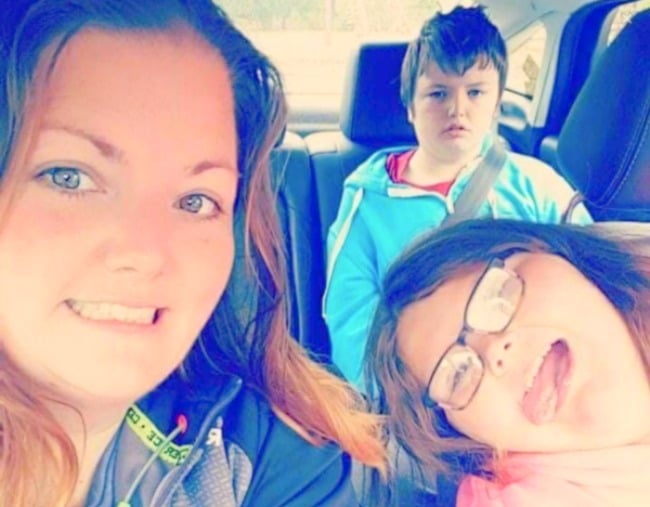 It should have been an ordinary family outing, where memories are made, but thanks to one unkind stranger, Ashley Wright and her children encountered intolerance and cruelty.

Ashley, a mum from Peterborough, Ontario, had taken her 13-year-old son, Logan, and 11-year-old daughter, Brinlee to the zoo, an approximate two-hour drive from their home When they arrived, the family needed the bathroom, and that’s when Ashley noticed a man (who was with his own family) staring at them. In his excitement, Logan, who has autism, was flapping his arms and making loud noises, and it seems that behaviour is what attracted the man’s attention.

He wasn’t happy about it, and decided to let them know. Loudly.

He asked, “Why do people bring kids like that out in public?”

Shaken, Ashley decided not to confront the man in front of her children, but later wrote an open letter to him on Facebook, answering his question directly.

“To the man at the Peterborough Zoo today . . . This letter is for you. Will you probably ever see it? No. Do I think you will actually care even if you did? Probably not. Maybe, just maybe, someone else will read this, though, and think twice about making someone feel the way you did today,” Ashley wrote in a post that has since gone viral.

Ashley explained that Logan seemed distressed as soon as they left the bathroom. He had started to pinch himself while grinding his teeth and making a loud, growling noise.

“I held on his arms and the three of us walked to the picnic area not far from the bathrooms,” Ashley wrote.

“I noticed you and your family were stopped and staring at us again…I could see it out of the corner of my eye as Logan tried to grab my hair, and when he couldn’t, he pulled his own while still very loudly screaming. He bit his arm.”

Ashley noticed that other people were also staring, but they had the decency to let the family deal with their own situation – unlike this stranger.

“You started walking closer to us and my brain instantly went into thinking, sir, please stay away I’m trying to protect myself, my daughter, and my son…You got about two feet away from us and very loudly yelled: ‘WHY DO PEOPLE BRING KIDS LIKE THIS OUT IN PUBLIC? THEY RUIN SOCIETY.'”

And it was this appalling accusation that Ashley felt she needed to respond to. In her post, she wrote that people with autism belong in society just as much as anyone else.

“He doesn’t ruin the society. He didn’t hurt anyone.

Ashley conceded that Logan was loud, but asserted that her child is no one else’s business.

“Was I asking for your help? Your opinion? Your advice? Nope. But you, a man about six-foot-three and easily 250 pounds, watched a mum who could’ve easily been hurt and scared, and made a situation worse. You could’ve asked me if I needed help.”

Ashley explained the purpose of her post was to raise awareness about how society should treat people with autism. And then she summed up the man’s behaviour in one simple sentence:

“I don’t know if you realised you were a real asshat.”

The proud and hurt mum finally concluded with her desire that if the stranger did learn of her letter, that he would exhibit more understanding in the future.

“All I can hope is that in the future if a situation like this happens again you don’t make another family feel the way you made ours feel today,” she wrote. “I also sincerely hope your children don’t grow up feeling that kids like Logan shouldn’t be out in public. Because he needs that social interaction. He deserves to get to see his camels after a good week of behaviour. He deserves to be treated just as good as anyone else.”

Oh my gosh, I'm appalled & horrified that there are people like this man out there. I hope you, Logan & Brinlee got to enjoy the zoo eventually.
Keep being a wonderful, strong mother xx