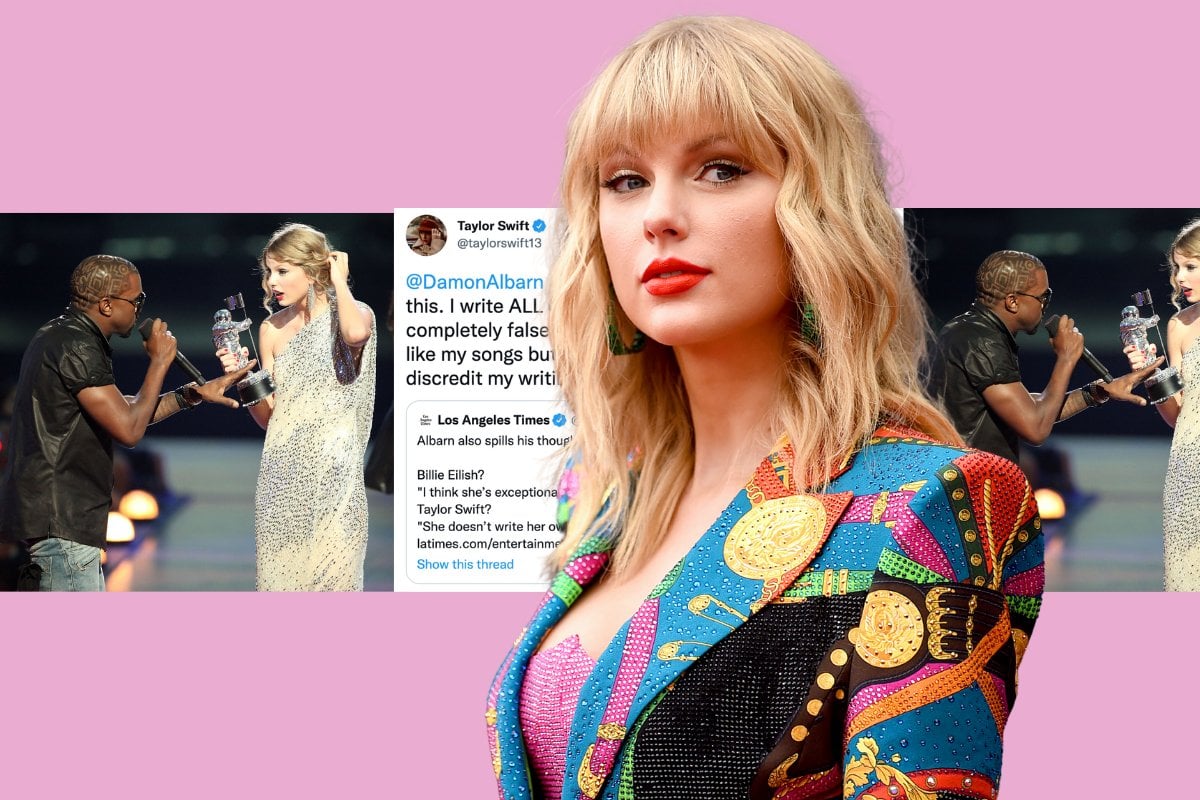 This post mentions sexual assault and could be triggering for some readers.

A small Twitter-based eruption occurred this week, which once again flung a man's ill-informed opinion towards Taylor Swift and her career.

The eruption stemmed from a profile interview in the LA Times of Damon Albarn, who if the name is not ringing a bell, is the former frontman of both Blur and Gorillaz. He was being questioned on the integrity of modern music production when a mention of Swift was made. He had a response, and he simply had to share.

"She may not be to your taste, but Taylor Swift is an excellent songwriter," the interviewer stated.

"She doesn’t write her own songs," Albarn rebutted.

...apart from she does. Every single one of them, in fact.

@DamonAlbarn I was such a big fan of yours until I saw this. I write ALL of my own songs. Your hot take is completely false and SO damaging. You don’t have to like my songs but it’s really fucked up to try and discredit my writing. WOW. https://t.co/t6GyXBU2Jd

Taylor Swift first started making music well before her tenth birthday and had signed her own singer/songwriter record deal with Sony when she was just 14 years old.

She's the crafter of iconic hits like 'Love Story', 'Enchanted' and 'All Too Well' (both versions).

Her success is remarkable. She has sold out stadium tours multiple times over, released hit album after hit album and has been showered with Grammys, Billboard and MTV awards.

But yet there's always a poorly informed critic waiting in the wings to dull the sparkle of her star.

It first happened on perhaps the most public of stages, at the Grammys, no less, when a certain rapper appeared on stage during Swift's award acceptance speech to say: "Imma let you finish, but Beyonce had one of the best videos of all time."

Not only did Kanye West physically take the mic off her, in a moment she was meant to be celebrated - but he also pitted her against another female artist. One with much more experience in the spotlight under her belt. One that had no personal vendetta against Swift. One that didn't ask for any of this to happen.

But it did. And it marked the first of many times Swift has been interrupted and undermined.

Next it was manager Scooter Braun, who through a series of business moves, gained control of Taylor Swift's masters (aka the original rights to her music) in 2019. Taking ownership of her songs, her stories and her voice was not something Swift was going to sit back and take.

She fought Braun, and made a move not ever seen before in record label history: she re-recorded and released all of her back catalogue, aptly naming them all the original titles with a not-so-subtle 'f**k you' addition of (Taylor's Version) emblazoned on every track.

Swift has teased out her album re-releases and with every one, she jets straight to the top of streaming charts - taking cash directly out of Braun's pocket and putting it back into hers.

Then there was her sexual assault trial.

David Mueller, a former DJ, filed for defamation against Swift. He claimed she had him wrongfully terminated following an incident at a 2013 meet-and-greet. An 'incident' that involved him inappropriately placing his hand on her bottom. An 'incident' that was caught on camera.

When the defamation case was filed against her, Swift responded by counter-sueing Mueller for battery and sexual assault. She revealed her reasoning for counter-suing was to empower others who have been the victims of assault, seeking symbolic $1 in damages, but knowing full well that the case would be watched by millions.

The trial lasted one week, beginning on August 7, 2017, with both Mueller and Swift appearing in court. It concluded on the evening of August 14, 2017, with the jury ruling in Swift's favour and ordering Mueller to pay her $1 - spreading the message that she, nor other sexual assault victims, should be silenced.

Listen to this episode of Mamamia Out Loud, all about Taylor Swift. Post continues after podcast.

Then history repeated itself and Kanye West was back on the scene.

This time he wasn't stealing the mic from her hands, but instead taking credit for her entire career.

In his song 'Famous', he boldly stated: "I feel like me and Taylor might still have sex, yeah, I made that bitch famous." Oh, and he also did it via a music video that featured a naked wax work of Swift lying in the bed with him and a slew of other celebrities West believed he helped 'make'.

Apart from he didn't 'make' any part of Swift's career. He didn't collaborate on songs, he didn't dress her for red carpet events, he didn't help promote any of her albums. Instead, he interrupted her on stage one time, embarrassing her, himself and everyone watching.

So why do these older men keep butting in and minimising Swift's success, or trying to take credit for it?

Or maybe because it's too tough for them to fathom that a woman can have such immense success at all, especially if it originated with singing about high school heartbreaks, and if there has been no male input or mentorship to help her navigate the music industry. So they defensively take credit where it's not deserved, claiming that their minor interruption caused commercial prosperity beyond belief.

But neither of these arguments are valid, and no one knows that more than Swift.

She's waxes lyrical about never letting other's take credit, dull your shine or take advantage of you and your talents. And while we adore her for that, the stroke of genius that Swift applies to these controversies is that she has and will always come back on top.

Reply
Upvote
I have always had a love/hate relationship with Ms swift - as a mumma of four daughters who are the same age as Taylor our household grew up with her music blaring and lamenting every crush and heartbreak they went through - largely I was happy enough that they had someone as (dare I say it) ‘wholesome’ to model themselves on …. she was only a 17yr old KID when Kayne pulled his bs during her speech - as a mum of girls who have been 17, That turned my stomach - that’s when I applied a teenage lens overtop of those types of situations I was so impressed- by her maturity - and by her moves surrounding her career as an entire entity …
N
nessie 4 months ago