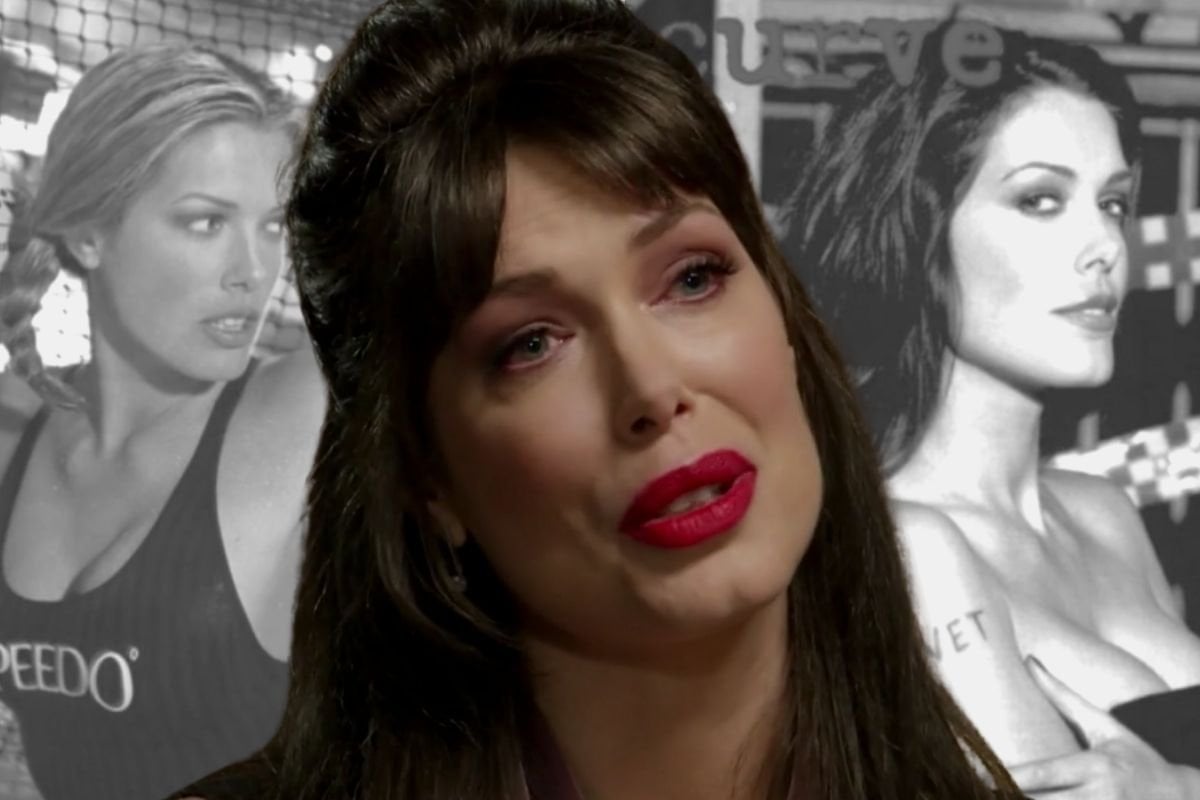 When Tara Moss was 16 her modelling agency sent her off to do some portfolio shots with a photographer.

"This will be really great for you," they told her.

As soon as she arrived, the photographer offered her some vodka. He was the only person at the shoot.

As Moss told Anh Do's Brush With Fame on Tuesday night, "I was underage and I didn't drink. And I was like, 'No, no, no. I want to keep my wits about me. Thank you very much.'"

Watch: Tara Moss also spoke about losing her mum as a teenager during the show. Post continues after video.

As she started to get herself ready, her instinct told her something wasn't right.

"I had a very bad feeling which was a good instinct, because he came over later and he showed me this portfolio and he said, 'I want to do photos like this.' And they were pornographic."

Moss started to pack up her things very quickly, and as she pulled her knapsack onto her back the photographer lunged at her, so she punched him.

"He fell back and hit his head on the concrete. I was freaked out. I thought I might have killed him," she told Do.

Once he hit the ground he didn't move, so she made a run for it. But the next day it was Moss who was in trouble - not him. The word was out that she was a "troublemaker."

It wouldn't be the last time the model turned author found herself in danger.

Speaking to Do, Moss touched on a sexual assault she was subjected to 26 years ago which she wrote about in her book The Fictional Woman, telling him she wasn't sure if she was even going to include it. It was only one page out of a 305 page book, but at the time of publication in 2014, it was the page the media inevitably focused on.

"It was hard for me to come to terms with the caption 'rape victim Tara Moss'. It wasn't comfortable to me, but I have no regrets," she said.

At the age of 21, Tara says she was attacked by a serial rapist who was an actor. As she told A Current Affair in 2015, she was raped and "imprisoned for a night" by her attacker after he'd offered to drive her home from an acting class in Vancouver.

The man was convicted of sexual assault, but not on the charges laid against him by Moss. As she told ACA, about a dozen women came forward with stories about the same man.

"I was changed because of that experience, but I did become stronger. I am a survivor. I think silence only helps the perpetrator, it doesn't help the victims and the survivors," Moss told Do.

In the years since, Moss has continued to lend her advocacy to sexual assault reform and awareness.

Actress and author @Tara_Moss says it took her 20 years to share her story of sexual assault. And while speaking out was difficult, it was also empowering. Now she’s joining the fight for law reform in Tasmania to give sexual abuse survivors a right to their voices. #LetHerSpeak pic.twitter.com/twejm4awGK

In The Fictional Woman, Moss also shares social commentary and analysis on the many labels she has worn over the years; 'model,' 'feminist', 'dumb blond', 'bimbo', 'party girl.'

But as she told Do this week, having to 'prove' the label she was most proud of - author - was "the hardest thing I had done at that stage of my life."

At the age of 25 Moss's first novel Fetish became a bestseller. But because the public knew her as a model, she found herself at the centre of a backlash where people assumed she hadn't written it herself. The backlash continued with the release of her second book Split, and so the two-time author agreed to take part in a dare suggested by a newspaper. They organised a lie detector test with the goal of deciphering if she was truly the author.

"It was completely bonkers, but it was before the days of social media and I did not have a voice. I was a picture and I was a novel - and people couldn't seem to connect the two. It was incredibly weird. So I underwent a polygraph test with this cop who normally tests suspected pedophiles and rapists and I was like a suspected author."

A 33-page report was produced that told the paper Moss was who she said she was - a talented author.

"It's weird that you would attribute intellectual capacity to an appearance," said Moss of the entire debacle. "It was this moment of like my dream coming true (becoming an author) and it tarnished that, because I had to fight just to be recognised as having done the thing that I did."

It took five years and three novels for Tara Moss to be recognised as Australia's No.1 crime writer. She had already forged a successful career in modelling, but had always considered herself a "writer who was modelling to pay the bills," and quit the industry after her first book was published.

"I just write now," she told Do. "And that has always been my dream." However, she added that she's more than happy to take a phonecall from anyone looking to feature a "46-year-old grey-haired disabled woman."

As someone that lives with Complex Regional Pain Syndrome (CRPS), Moss is "still up for it" even though she jokes that she is "extremely veteran" in modelling circles.

But if it means more representation, Moss is happy to lend her talents.