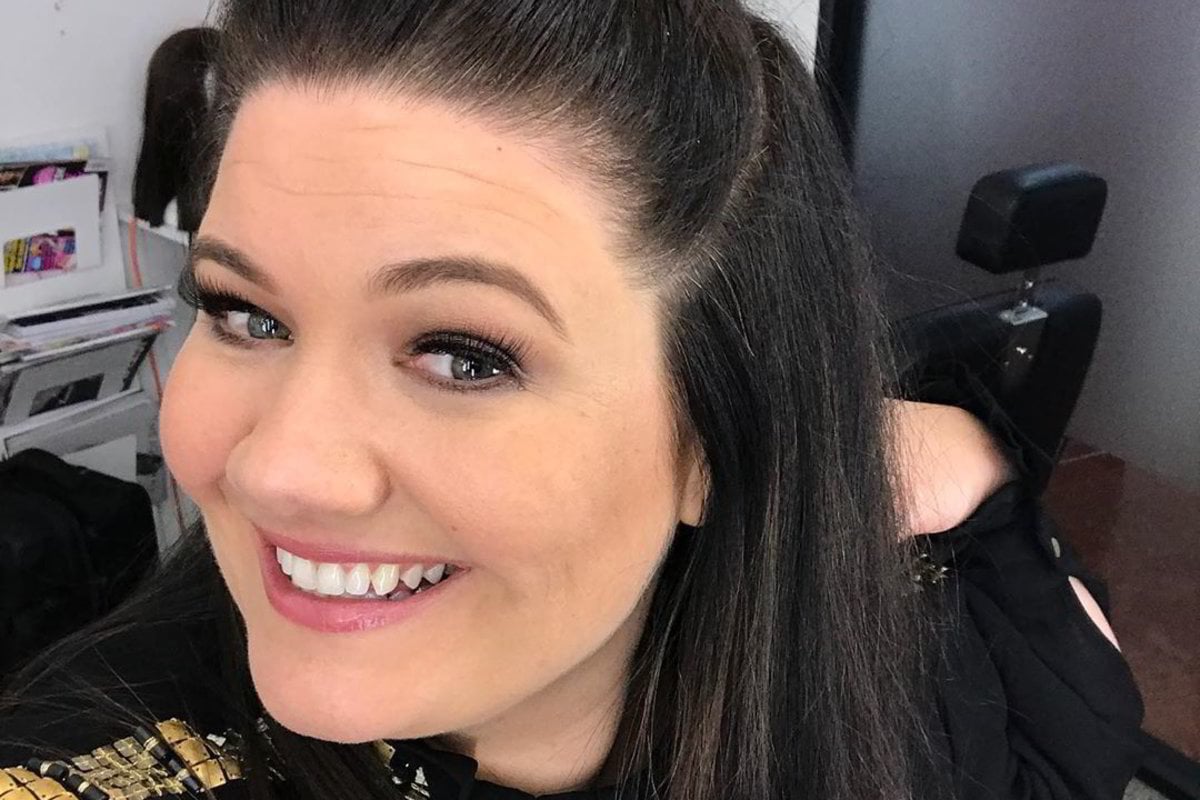 When Tanya Hennessy was in the South African jungle, covered in dirt, eating cockroaches and showering in front of cameras, she really didn't think 2020 could go anywhere but up.

Eight months later, that may have been a highlight.

Not long after returning to Australia from I'm a Celebrity... Get Me Out of Here! this whole 'global pandemic' thing really kicked off and within weeks, she was in lockdown with the rest of us.

WATCH: Tanya Hennessy talks about her high school bully on I'm a Celebrity... Get Me Out of Here. Post continues below video.

Perhaps the greatest metaphor for 2020 came the moment Mamamia connected with Tanya on the phone this week: She'd just dropped hot porridge on herself, so answered questions while standing with her hand in her freezer.

"I’ve got my hand in the freezer like a ridiculous human being, in pyjamas," she jokes.

Does anything symbolise this year better?

Ignoring the burned hand for a moment, Tanya says this year and all that has come with it has been quite good for her.

"Which is the worst, because you feel guilty that other people are doing it so tough," she says.

She's been creating hilarious content online as usual, has started a podcast, and is preparing for the launch of her second book in November.

She's also been looking after her mental health, something she has been open about struggling with in the past.

"I've found I haven't been able to sleep, because you know, you think about the world... The thing that’s been really helpful for me is like, standing in grass and walking. Standing in grass sounds really dumb, but nature!" she laughs.

"The other thing that’s helped with mental health is gratitude. Having gratitude and being aware of what you’re grateful for. I think that really combats all the things that overwhelm you; combating them with positivity. I do gratitude every morning or every night. Sometimes I do it in my head as I go to bed so the last thing I'm thinking about is positive, because I tend to catastrophise.

"And I've actually learned to meditate and if I can do it, f**ing anyone can do it. I've been trying to help myself in any way possible because you have to, mental health has never been as important as it is now."

In the past, Tanya has spoken about imposter syndrome and her fear that in one moment, her career could be taken away. How does she balance this fear with the way society glamourises 'busy' and always wonders 'what's next?'.

That's still a work in progress, but she is learning to relish moments as they happen.

"I have a real problem with taking a moment and being really present, so much so I’ve actually thought about writing a book or creating something about imposter syndrome, about how to deal with it and how to be more present," Tanya explains.

"I actually had the idea of looking for a hobby. Because I feel like hobbies are like mindfulness, and I thought wouldn’t it be cool to bring back hobbies and it not be about having a side hustle? It’s not about a moneymaking venture, it’s just sheer personal enjoyment. I feel like we’ve lost that, and I’d love to come back to that.

"It's always like 'What are you doing? What's coming up next?'. I wrote about it on my Facebook page the other day, because people are always like 'Oh, you wrote your book - when's your next one coming out? When are you going to have a baby? Are you going to get married soon?'

"I feel like as a society we have a problem with acknowledging the current and that feeds into us as individuals thinking 'Oh, I'm not doing enough, I should be doing more' and that's something I'm 100 per cent working on. To be completely mindful and present, and to do the work I'm working on now and that be enough."

Tanya says she just wants to be happy. On one hand, having a successful career is a part of that, but she is conscious it's just one part.

"People go 'What do you want from the world?' and I just want to be happy. There's no amount of content that's going to make me feel what I want to feel. The things that bring me joy are being out in nature, hanging out with family and friends, and I'm trying to just enjoy those moments instead of being so consumed by content."

But content is her job, and it's landed her a pretty large profile that was only amplified by I'm a Celebrity in January.

"I've never wanted to be famous, ever," she explains. "I've just wanted to make great content and have a challenging career and life and make great stuff. I think weirdly fame, I hate that word, is a byproduct of it so you just have to get used to it."

So if you've got the platform, why not use it for good? Her 2020 content has been spurred on by the hope of escapism; giving people a laugh to distract them from... well, everything.

Ok. I have written two books (what the hell?!) my second went to the publisher today!This name of my next book. She will be out in November! @kellyafagan @allenandunwin - pic by @glitter.is.a.neutral

She's started a podcast with Indigenous comedian Steph Tisdell called I Can't Stop, and she's preparing for the release of her second book, Help Self, in November.

She also recently completed the #FinishWaterWaste challenge, where she used only 40 litres of water per day (the average city dweller uses 340L in the same time period) which aims to deliver 10 million litres of water to rural communities still impacted by drought.

As it turned out, her jungle experience at the start of the year was the perfect preparation for it.

For more information on the #FinishWaterWaste challenge and how to help rural communities in need of water, visit finishwaterwaste.com.au.