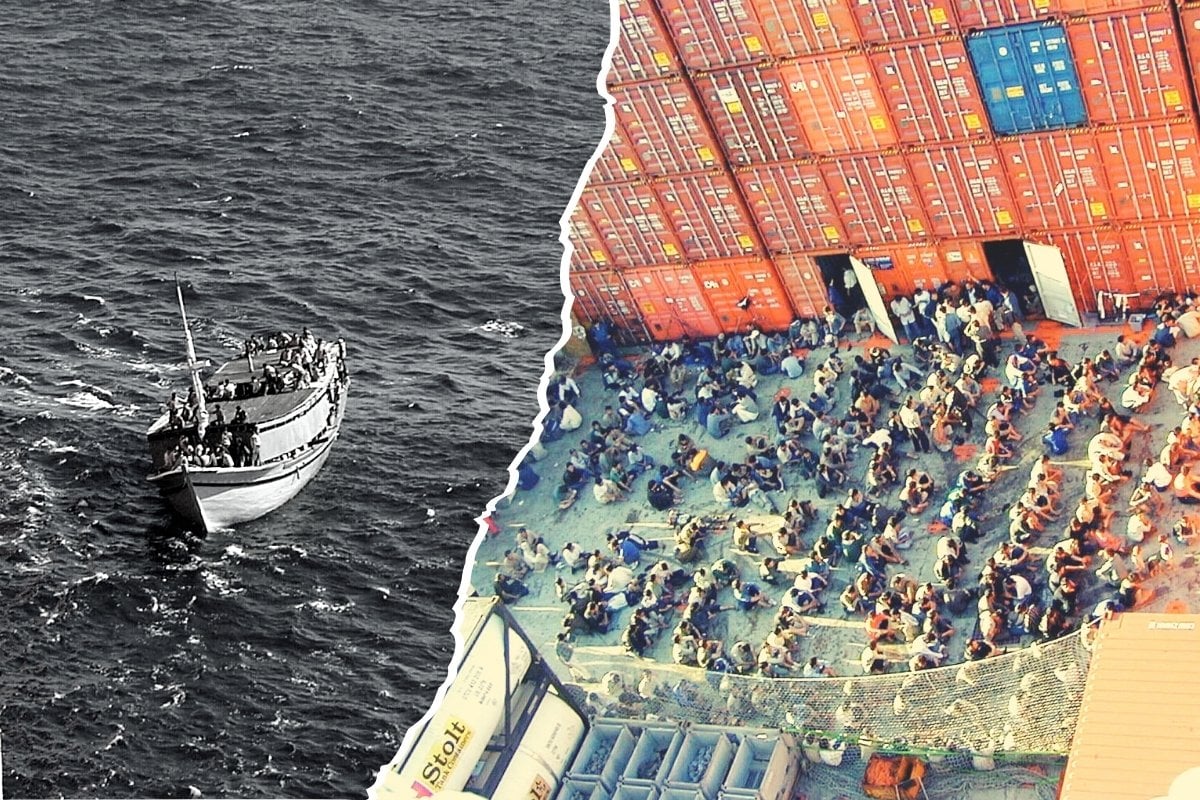 One night in August 2001, seven-year-old Abbas Nazari was startled awake by his mother. "We're leaving."

The Afghan boy and his parents had been in Indonesia for two months, waiting for news about their promised passage to a new life in Australia. In the darkness, they scrambled to pack their belongings and were rushed by bus to nearby Port Merak. From there, it was into the belly of a ship called the KM Palapa.

The ship, a tired wooden fishing vessel, was built to hold 40 people. There were 433 asylum seekers crammed on board.

Most, including Abbas and his family were members of Afghanistan's Hazara ethnic minority, which had been brutally persecuted by the Taliban. To these desperate souls, Australia represented a life free from the threat of torture, beatings, imprisonment and massacre. It represented safety. A new beginning.

If only they could make it there.

On the second day traversing the Indian Ocean, the Palapa's engine failed. That night, it weathered a severe storm.

For Abbas, it was the most frightening point of the journey. For his father, too.

"He thought that he was offering his family a chance at a fresh start, and now in this situation, when our boat was at the mercy of the waves, he thought that he'd condemned us to death," Abbas said in a 2012 TEDx talk.

"Thinking back on it today, I think how the hell did we survive that night, because it was a miracle."

The next morning, an Australian Coastwatch plane passed overhead. Once, then again. It saw the SOS message on the roof of the vessel, a crude sign fashioned from the headscarves of women on board.

By the evening, a towering Norwegian cargo vessel emerged on the horizon. Their rescuers. The MV Tampa.

What unfolded over the next few weeks is a pivotal chapter in Australia's political history, the impetus for our country's longstanding, yet deeply controversial policy on asylum seekers.

Video via Liberal Party of Australia.

Twenty years on, as thousands seek to flee Afghanistan once more, its legacy lingers.

Here's how the so-called 'Tampa Affair' played out.

A standoff at sea.

The MV Tampa was en route from Fremantle, WA, to Singapore, when its captain, Arne Rinnan, responded to the Australian Maritime Safety Authority's appeal to assist a sinking fishing vessel roughly 140km north of Christmas Island.

All were brought safely on board, and under the instruction of Australian authorities, Captain Rinnan steered his ship toward Merak.

Speaking at a press conference shortly after the incident, he described the panic of his new passengers when they learned they would be returned to Indonesia.

"The body language was kind of threatening; it was all up in my face," he said. "They were talking about they will go crazy, they will jump [off] the ship if you're not headed for Christmas Island. So then I decided to turn around the ship for everybody on board and got to Christmas Island, which was also the closest port."

Only, Australia forbade him from entering its waters on the grounds that it would not accept smuggled asylum seekers. Captain Rinnan was threatened that he would be prosecuted accordingly.

"I believe it is in Australia’s national interest that we draw a line on what is increasingly becoming an uncontrollable number of illegal arrivals in this country," then Prime Minister John Howard said at the time.

And so our federal leaders entered a political standoff with a cargo ship, while the rest of the world watched on. 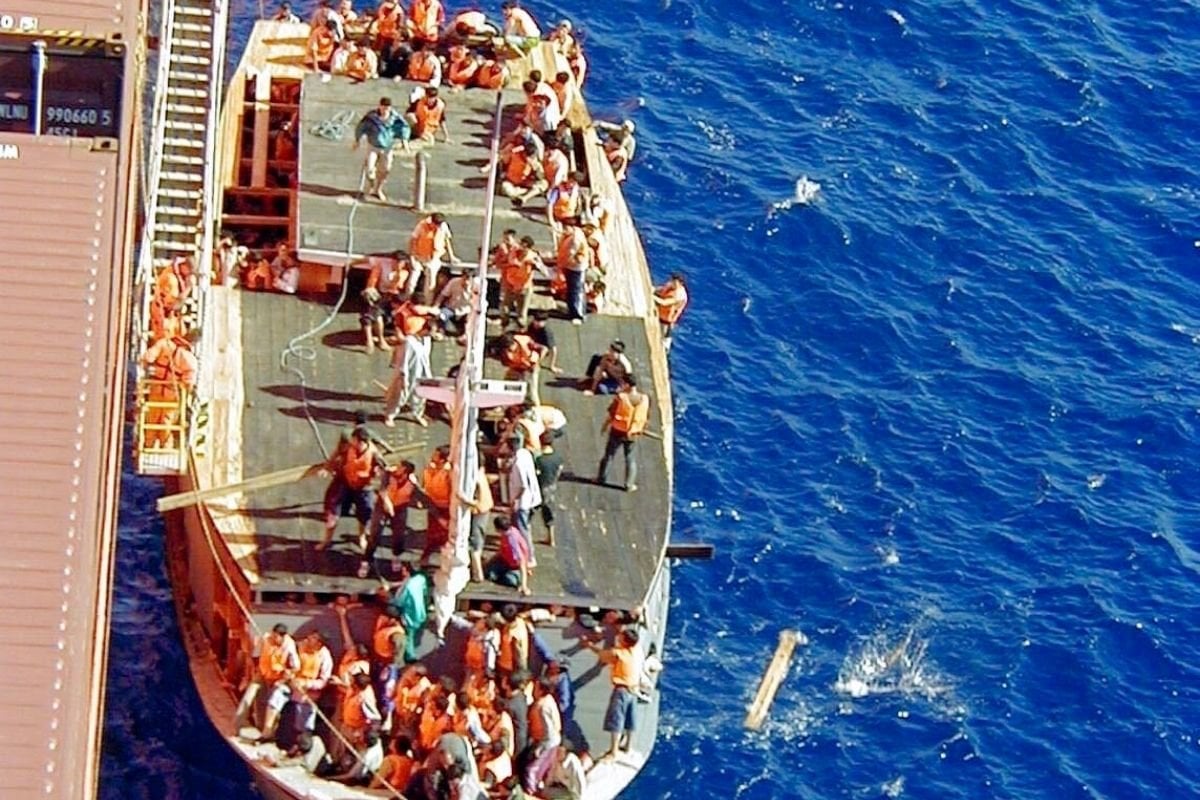 The Palapa was crammed with more than 10 times the number of people it was built to hold. Image: AAP.

For 48 hours, the MV Tampa hovered just beyond Australia's maritime boundary, appealing for assistance for the sick Afghans on board. Fifteen were unconscious. Some were suffering vomiting and diarrhea, others had open wounds, and at least one had a broken leg.

"The Australian government told me a lot of things," Captain Rinnan told the media. "That they would supply medical assistance, but nothing showed up, and the situation on board was getting worse and worse."

With the condition of his passengers deteriorating, Captain Rinnan made the choice to ignore the Government's warnings and head for Christmas Island to obtain the necessary medical help.

Close to an hour later, it was boarded by 45 members of Australia's elite army special forces regiment, the SASR.

While the Afghan passengers transferred onto an Australian naval ship, back in the halls of Parliament House, the Federal Government was fast at work developing a plan that would mean it did not have to accept the Tampa's rescued passengers.

There was a major obstacle, though. Australia was a signatory to the United Nations Convention Relating to the Status of Refugees, which means it is legally obliged to protect those who enter its territory — maritime or otherwise — seeking asylum.

The solution found by the Government was to prevent refugees who did not have proper authorisation from entering Australian waters in the first place. And so, just months out from a federal election, the 'Pacific Solution' was born.

By September 2, the Government had struck a deal with Nauru and New Zealand to accept the Tampa passengers for assessment and resettlement in those countries. (Abbas Nazari's family were among 131 people to establish a new home in New Zealand — a country he previously never knew existed.) 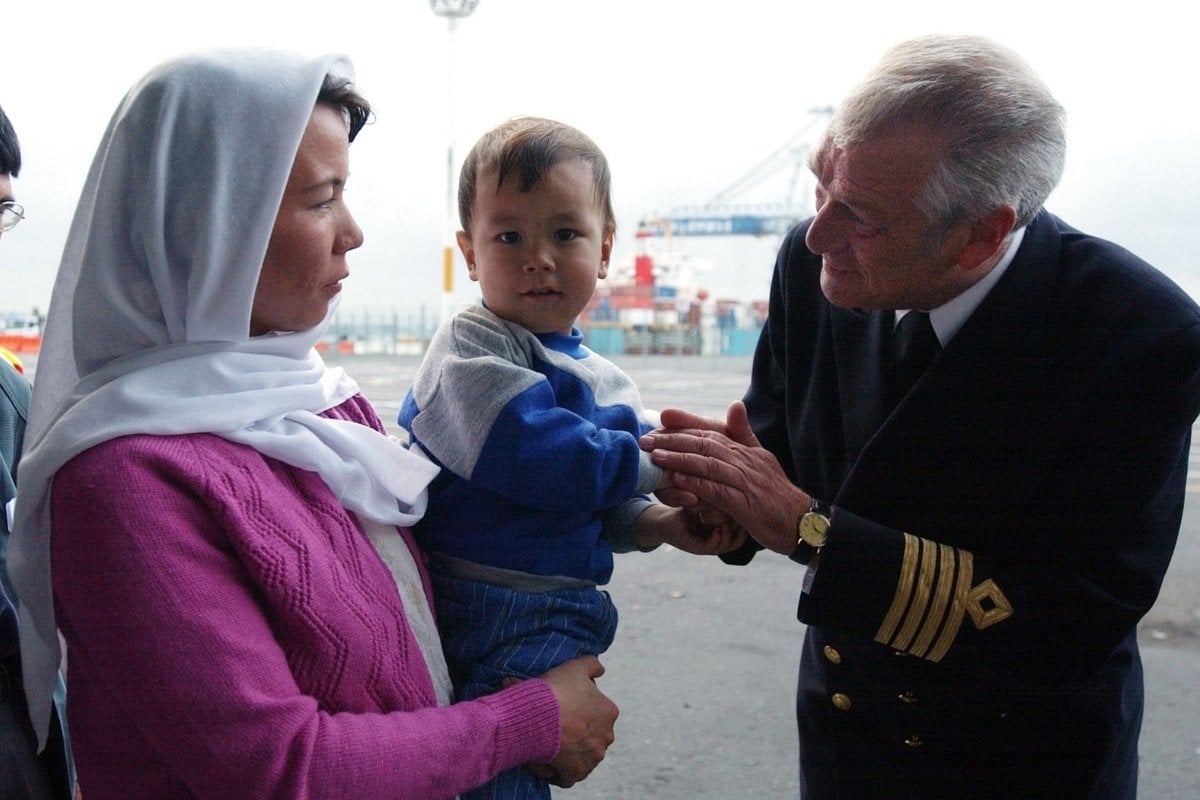 Captain Arne Rinnan is reunited with some of the people rescued by the Tampa and resettled in New Zealand. 2002. Image: Getty.

The Government then scoured the Pacific to establish similar, ongoing arrangements for future boat arrivals.

Until then, Australia’s policy for asylum seekers who arrived by boat was to detain them in Australia while their claims for protection were processed. Successful applicants were granted temporary visas and resettled into the Australian community; unsuccessful ones were returned to their country of origin.

The new approach, however, meant that individuals seeking asylum must be processed off-shore, and decisions about their claims for refugee status considered in the same way as those filed from abroad — a process that can take several months, even years.

In exchange for millions in aid funding, Nauru and Papua New Guinea (Manus Island) agreed to facilitate this offshore detention arrangement. Plans were also made for a permanent facility on Christmas Island.

While the latter is an Australian territory, new legislation was passed to ensure that it, along with Ashmore Reef and several other northern Australian islands, were struck from Australia's migration zone. This meant people who arrived there by boat couldn't lodge claims for immediate asylum like those who arrived on the mainland by plane.

Two: turning back the boats.

In the six weeks after the Tampa's rescue effort, the Australian military launched Operation Relex. This involved turning several boats carrying asylum seekers (by then labelled 'Suspected Illegal Entry Vessels') back to Indonesia.

Among this wave came another wooden boat that sank off Christmas Island with 223 asylum seekers on board. Then Immigration Minister Phillip Ruddock claimed passengers had thrown their children into the sea as part of a ploy to be rescued and secure their passage to Australia.

A Senate Inquiry into the 'children overboard affair' later found there was no evidence to support the claim. But that wasn't held until 2002.

By then, the notion earned widespread support for the Government's strict new migration policies, which helped them secure an increased majority in the November 2001 election. It was in the lead-up that Prime Minister Howard uttered the now-famous words: "We will decide who comes to this country and the circumstances in which they come!"

In Abbas Nazari's view, "John Howard had closed the doors on Australia to further his campaign".

The legacy of the Tampa affair.

Though the policies enacted after the Tampa affair were undoubtedly extreme by international standards (and broadly criticised), they proved effective at halting the people smuggling trade to Australia.

Some 5,516 asylum seekers had arrived in Australia by boat in 2001, and hundreds more lost their lives on the journey. But in 2002, that number shrunk to just one. Over the next five years, there were no more than 60 asylum seeker boat arrivals annually.

In the decades since, Australia's immigration policy has oscillated with successive governments. But support for boat turnbacks has been largely bipartisan and remains in place to this day.

Supporters of these hardline policies argue that they have prevented people from risking their lives at sea and have squashed the people smuggling trade that derived profit from the desperation of persecuted people. Critics, meanwhile, point to the demonstrable harm caused to those left languishing for years in prison-like immigration detention centres, despite having committed no crime.

For Abbas Nazari, who was saved that August day 20 years ago, Tampa represents something else entirely: freedom, safety, the new life he was able to lead in New Zealand.

The Wellington man is now a husband, father, author (his memoir, After Tampa, was released this year) and Fulbright Scholar.

It's from this vantage point that he watches as his homeland, Afghanistan, is once again in turmoil amid the return of the Taliban, with people desperate to flee its borders.

"Twenty years on from the Tampa, I hope that Australia can open its doors this time," he tweeted this week, "instead of shutting them".