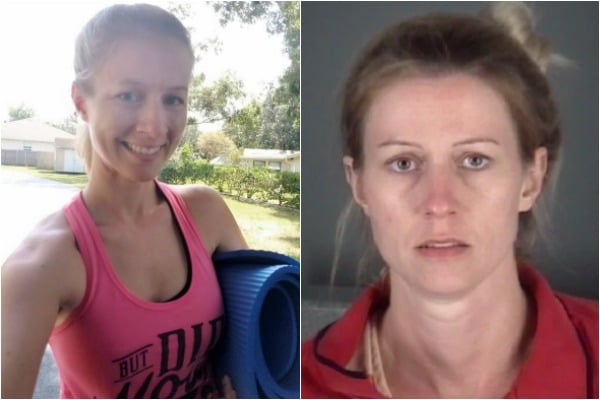 Online Tammy Steffen is a picture of happiness – smiling for the camera and sharing snaps from hers and her client’s fit and fantastic lives.

The 37-year-old Florida fitness trainer and mother of four was no stranger to sharing her wisdom with her online following, calling on them to “help spread the love of fitness” on various personal and professional social media pages.

Her pages look like any other health and fitness influencer, but Steffen was anything but.

For more true crime, watch this. Post continues after video.

Steffen was the mastermind behind more than 350 accounts which she’d been using to harass former colleagues, sending them vile messages like, “I plan to slice you up into little pieces.”

Her unravelling began in 2018, and started with, believe it or not, a headless doll.

On July 9, 2019 Steffen called police to report the doll which had been left on her front porch.

Five days later she phoned again, this time claiming that someone had tried to kidnap her daughter.

Her 12-year-old had been feeding the dogs when Steffen claimed a Hispanic man tried to drag her into the woods. She said her child had urinated on herself in fear.

The police sprung into action and found a laptop case in the woods that had a notepad full of personal information about Steffen's family. After the little girl described her attacker, Steffen named her former business partner as a clear match.

But that's when things started to look a little off. Not only did her former business partner have a watertight alibi, but Steffen's daughter had asked police what'd happen to her mum if she "told the truth," reported the Washington Post.

As NDTV reported, police soon discovered that Steffen had in fact concocted the entire story, bought the laptop cover and notepad (there's CCTV to prove it), forced her daughter to wee herself and even planted the headless doll in the days prior.

The motive for the elaborate scheme, as far as police could piece together, was due to Steffen's belief her former partner had swayed the votes at a fitness competition she'd been competing in - an allegation police say is untrue.

Steffen was charged with filing a false report, tampering with evidence, child neglect and later tampering charges after she tried to get her daughter to claim responsibility for the kidnapping scheme.

But this was just the start of Steffen's secret life.

She'd been making threats from 369 Instagram accounts and 18 different email addresses towards an ex-business partner and fellow fitness competitors in the bodybuilding industry.

"Your blood shall I taste," read one of the messages from an account called 'catloverexpress.'

"All hell is gonna rain fire down on your world like never seen before," read another.

After causing, what the FBI described as "substantial emotional distress," Steffen plead guilty and was sentenced to time in a federal prison.

She'll spend the next four years, nine months behind bars, and has apologised to the judge for her actions.

“While no one wants to have legal proceedings, I am thankful for the intervention in my life," she wrote, reported the Washington Post.

Too much Pretty Little Liars, by the looks of it. What a nutbag.