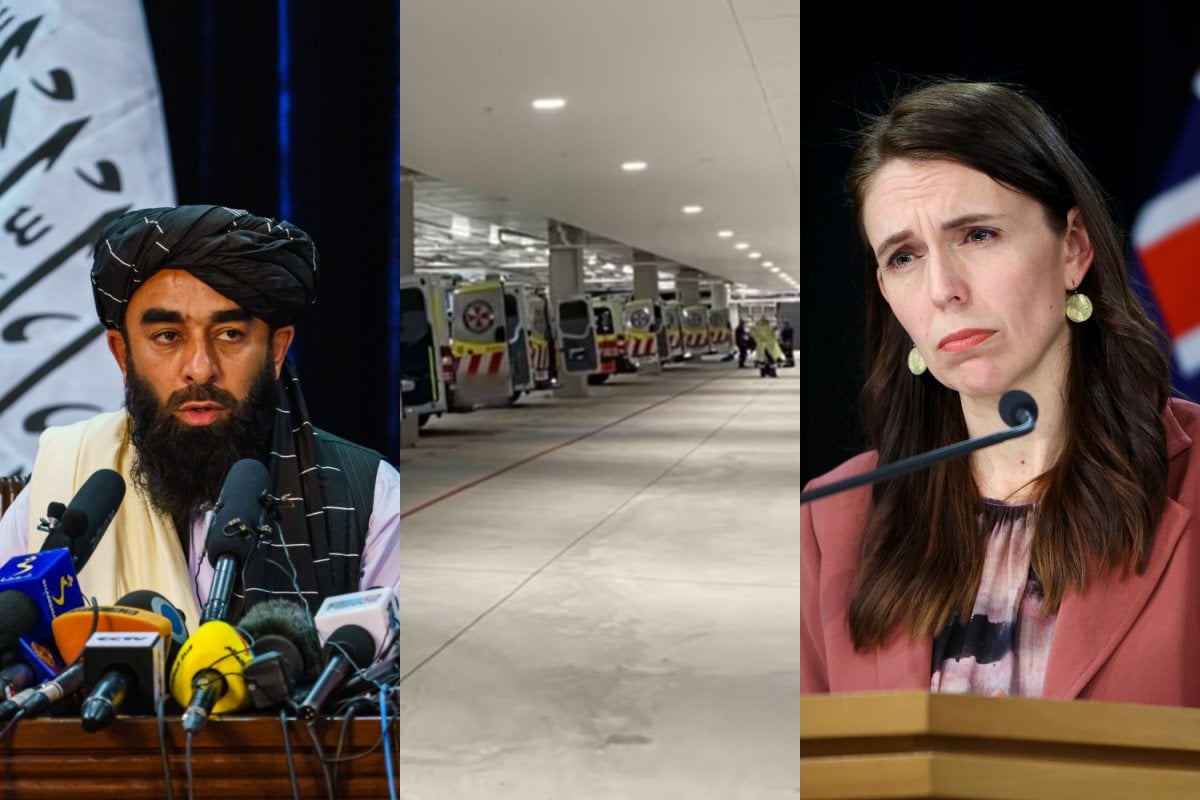 The Taliban have held their first official news conference in Kabul since the shock seizure of the city, declaring they wanted peaceful relations with other countries and would respect the rights of women within the framework of Islamic law.

The insurgents seek no revenge and "everyone is forgiven", he said.

When asked about the status of women's rights, Mujahid said women would be allowed to work and study and "will be very active in society but within the framework of Islam".

Zabibullah Mujahid, the taliban’s behind-the-scenes voice for nearly 20 years, appearing for first time in front of a house packed of Afghanistan’s vibrant media (one of biggest achievements of past 20 years) pic.twitter.com/0mZrN5CkRF

The Taliban would not seek retribution against former soldiers and members of the Western-backed government, he said, saying the movement was granting an amnesty for former Afghan government soldiers as well as contractors and translators who worked for international forces.

"We want the world to trust us," Mujahid said.

“We haven’t taken revenge steps against anybody, but during the war there was no choice”

Taliban Spokesman addresses press conference, saying “we have given amnesty to everybody, we want them to give us forgiveness”https://t.co/2f6JMTXHky pic.twitter.com/oJ5kYuD0VU

He said private media could continue to be free and independent in Afghanistan, adding the Taliban was committed to the media within its cultural framework.

The Taliban news conference came after scenes of Afghans desperate to flee the Taliban via United States and Western ally evacuation flights made their way around the world.

US military flights evacuating diplomats and civilians from Afghanistan restarted on Tuesday after the runway at Kabul airport was cleared.

Planes were due to arrive from countries including Australia and Poland to pick up their nationals and Afghan colleagues.

Afghan women and girls who have won freedoms they could not have dreamt of under the last Taliban rule that ended 20 years ago are desperate not to lose them now the Islamist militant movement is back in power.

Taliban leaders made reassurances in the build-up up to and aftermath of their stunning conquest of Afghanistan that the rights of women would be protected within the framework of Islam, including at Tuesday's first press conference.

But some women have already been ordered from their jobs during the chaos of Taliban advances across the country in recent days. Others are fearful that whatever the militants say, the reality may be different.

"Times have changed," said Khadija, who runs a religious school for girls in Afghanistan.

"The Taliban are aware they can't silence us, and if they shut down the internet the world will know in less than 5 minutes. They will have to accept who we are and what we have become."

The Taliban says Afghan "women will be allowed to work" and it will guarantee their rights "within the limits of Islam."

Some experts, however, remain wary of the group's intentions despite such claims. Read more: https://t.co/uPrVg4HJWS pic.twitter.com/J1DWvmDlcp

"They have to walk the talk. Right now they're not doing that," she told Reuters, referring to assurances that girls would be allowed to attend schools.

That defiance reflects a generation of women, mainly in urban centres, who have grown up being able to attend school and university and to find jobs.

When the Taliban first ruled Afghanistan from 1996 to 2001, their strict interpretation of sharia, or Islamic law - sometimes brutally enforced - dictated that women could not work and girls were not allowed to attend school.

Women had to cover their face and be accompanied by a male relative if they wanted to venture out of their homes. Those who broke the rules sometimes suffered humiliation and public beatings by the Taliban's religious police.

Hospitals in Australia's most populous state are "under enormous pressure" as the COVID-19 outbreak that has locked down Sydney for nearly eight weeks worsens.

"There is no question that the hospital system is under enormous pressure across NSW," the state's health minister Brad Hazzard acknowledged on Tuesday.

In recent days, four cancer patients, a nurse manager and a junior doctor have tested positive for the virus at southern Sydney's St George Hospital. Twenty-one patients are isolating, as are 80 health workers.

Mr Hazzard asked the community to be tolerant and understand that health staff were working hard, "but we're in a pandemic and people will have to be taken offline and we will have to have some inconvenience".

Long delays at Westmead Hospital's ambulance bay on Monday night forced paramedics to do paperwork on the concrete parking lot floor decked out in full protective gear, their union says.

NSW paramedics say up to 13 ambulances delayed at Westmead Hospital last night, due to strain on the health system. Some for 4 to 5 hours. Many carrying COVID patients. NSW Health says it is aware of the extensive delays. pic.twitter.com/y1gepZELWO

The Australian Paramedics Association (NSW) says one patient had to be X-rayed while stuck in the ambulance bay, where up to 13 vehicles were waiting for hours.

The ambulances were mainly transferring COVID-19 patients to the hospital.

He said NSW Health had failed to provide for the basic needs of frontline workers, and the logistics and capacity for COVID-19 patients should be better by now.

At least one ward has been closed at Canterbury Hospital at Campsie after transmission occurred.

More than a dozen patients have tested positive for the virus in recent days in an outbreak at Nepean Hospital.

BreastScreen NSW announced on Tuesday it would suspend all routine breast screening across NSW because of the outbreak.

NSW reported 452 new local COVID-19 cases on Tuesday, and the death of a woman in her 70s.

Premier Gladys Berejiklian warned the case numbers would get worse and that September and October would be "our most difficult months".

The steady increase in new cases has led NSW Health's contact tracing team to stop identifying most exposure sites in Sydney, focusing instead on the regions.

Meanwhile, NSW Police are warning Sydney residents against joining in anti-lockdown protests scheduled for Saturday, threatening arrests and fines for those that breach stay-at-home rules.

Victorian health authorities are pleading for residents of southeast Melbourne to get tested for COVID-19 as the city's mystery cases continue to grow.

The state recorded 24 new locally acquired coronavirus cases on Tuesday, with 10 potentially infectious while in the community.

The health department is asking anyone who lives or spends time in Glen Eira and Port Phillip local government areas to get tested if they have been to exposure sites, have any symptoms or "even if they are unsure".

".. by age, they're not linked by faith.
They aren't all in the same book club.
They are not all on the same footy club.
The only thing they share is geographic proximity."

"We want to see more tests right across the area because it's becoming a real concern for us," Professor Sutton said in Tuesday night's coronavirus update.

"We need more tests to track down unidentified chains of transmission and protect the whole local community."

There are now more than 510 exposure sites, with over 50 sites stretching from South Melbourne to Brighton.

Top End to learn if COVID-19 has spread.

Northern Territory authorities are expected to learn if a COVID-19 infected US man who travelled from Sydney to the Top End has spread the virus to others.

Contact tracers on Tuesday identified 99 close and about 300 casual contacts after the man in his 30s flew via Canberra to Darwin on Thursday.

He spent three days in Darwin and drove 300km south to Katherine on Sunday for work before a COVID-19 test revealed he was infected.

No new cases had been identified late on Tuesday as health workers ramped up testing and ordered contacts to quarantine.

NT Chief Minister Michael Gunner warned the public that many of the close contacts' test results were pending and it was too early to relax.

About 150,000 people in Greater Darwin and Katherine were plunged into a three-day lockdown at midday on Monday.

Authorities don't yet know how the man contracted COVID-19 and they are treating it as the Delta variant.

ACT Senator Katy Gallagher's daughter is one of Canberra's 17 people diagnosed with COVID-19 on Tuesday.

"This morning we were advised that my gorgeous daughter Evie has tested positive for COVID-19," the senator announced on Twitter late on Tuesday night.

"She is at home with us but is feeling pretty unwell and understandably worried about what this means for her and for the rest of her family. We are really grateful for the medical and personal support we are receiving.

"Our household remains in strict quarantine until ACT Health advises us that we don't need to isolate anymore.

"The rest of our family, including myself, have all returned negative tests."

This morning we were advised that my gorgeous daughter Evie has tested positive for COVID-19. One of Canberra’s 17 positive cases today.

My full statement is available on this link or on my Facebook page. https://t.co/uIbJlwmZIo pic.twitter.com/2iFyecwgce

Ms Gallagher, Chair of Select Committee on COVID-19, said she was "lucky" as she is fully vaccinated.

"Unfortunately too many Australians have not had that opportunity," she said.

The ACT has recorded 17 new cases of the virus, taking the number of active cases to 45.

Concerns are rising that people buying takeaway food or groceries or visiting other businesses such as hardware stores are spending an unreasonable amount of time in the community.

ACT Chief Minister Andrew Barr said that while there were no planned changes to the current restrictions, police would be keeping tabs on businesses to ensure customers are there for essential reasons only.

Auckland case is Delta; four new community Covid-19 cases. One of the confirmed cases is a health care worker from Auckland Hospital.https://t.co/YSXmv87mHU pic.twitter.com/Y3Un0g2juD

Ardern said all cases have now been confirmed as Delta variant.

The prime minister had already placed the nation on strict lockdown starting on Wednesday after the first infected person was identified.

It was the country's first case of coronavirus in six months.

All of NZ will be in lockdown for three days from Wednesday while Auckland and Coromandel, a coastal town in which the first-identified patient had also spent time, will be locked down for seven.

Imposing its toughest level 4 lockdown rules, schools, offices and all businesses will be shut down and only essential services will be operational.

- A group of 47 migrants are feared dead after their boat broke down and drifted for two weeks off the coast of northwest Africa.

The boat was carrying West Africans trying to migrate to Spain's Canary Islands, off northwest Africa, according to IOM's Missing Migrants Project.

- 37 people, including 14 children, have been killed in a terrorist attack in the West African country of Niger when armed assailants on motorcycles attacked the village of Darey Dey in the Tillaberi region close to the border with Mali.

- Heavy rains and flooding have lashed Haiti, complicating rescue efforts and drenching thousands left homeless by a devastating earthquake that killed at least 1419 people, as hopes dimmed for survivors.