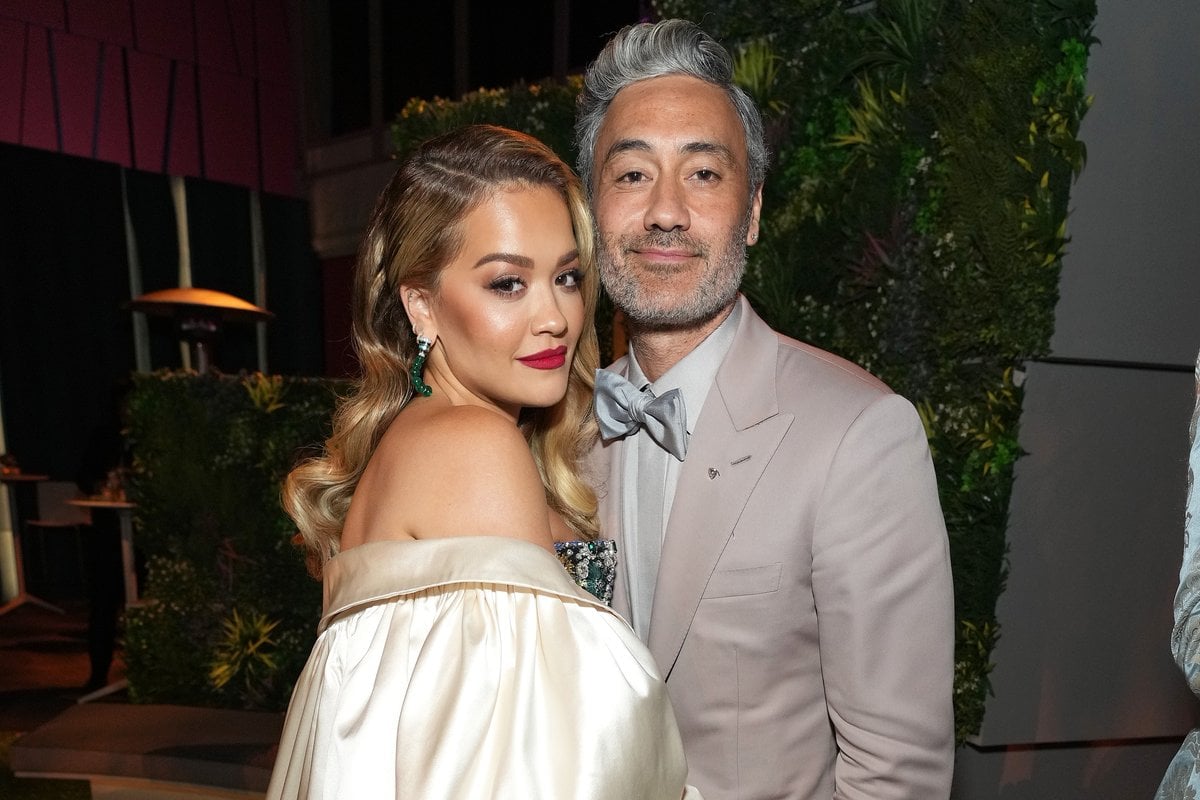 Taika Waititi and Rita Ora have reportedly tied the knot.

According to a close source, the couple wed in an intimate ceremony in London, surrounded by family and friends.

"It was a really intimate ceremony and super special for everyone there. Their nearest and dearest can see how madly in love they are," the source told The Sun.

"Despite living in the spotlight, Rita is determined to keep the relationship as private as possible and didn't want to make a big song and dance about the wedding."

The singer, 31, was recently spotted wearing a gold band on her wedding finger. She has also reportedly changed her surname and will now be known as Mrs Waititi-Ora.

Another source previously shared why they decided to do something low-key.

"This isn’t about them doing a big showy thing and crowing about it beforehand. It’s just about them being in love and deciding the time is right to formalise their relationship," they told The Sun.

The source added: "They didn’t do a whole, 'Will you marry me?' thing and an Instagram post.

"There’s no ring or big build-up. They just got closer and closer and eventually said to each other almost simultaneously, 'I want to marry you.'"

While neither have publically announced the news, Waititi often mentioned "how he's going to be [Ora's] first and last husband".

The couple - who started dating in March 2021 - rarely comment on their relationship, with Waititi recently ending an interview abruptly when a TV host asked about an upcoming wedding.

During an appearance on UK's This Morning with Chris Evans to promote their new movie Lightyear, presenter Philip Schofield congratulated Evans on his birthday before asking Waititi: "Are there wedding bells?"

Waititi avoided the question as best he could.

"You can congratulate me! It's in August! Let's talk about my birthday!" he said, before pretending to have earpiece issues.

"What? Sorry, you're breaking up, nope, gone!" he added, tossing the earpiece out and effectively ending the interview.

Earlier this year, Waititi was in Sydney promoting Thor: Love and Thunder with Chris Hemsworth.

But while the Kiwi director is having his moment, it's taken him decades to get here.

Born to a Russian-Jewish mother and Māori father, Taika Waititi lived between Raukokore in the Bay of Plenty, and Wellington, New Zealand, as a child.

"The woman is Robin [Cohen]... and she was a schoolteacher. And the guy next to her, his name is Taika, and he's a farmer and an artist," the 46-year-old said while showing a photo of his parents during a 2016 TED Talk.

"And they met and then, a few drinks later, they gave birth to a beautiful Asian daughter called Taika," he jokingly added.

Waititi's father - a founding member of the NZ motorcycle group, Satan's Slaves - had spent time in and out of prison. It was when he was inside that Waititi's mother met him, bringing in books for the inmates to read on a charity visit.

"[It was] the most improbable match you could imagine," the director told Wired. "I can’t envision what their conversations would have been like."

His parents divorced when he was five.

But when directing his first short film, Two Cars, One Night, he used Waititi. And it stuck.

"Because I made my first short film in that area where I was known as Waititi, that was the name that was put on the film," he told Cultural Weekly.

"And that film did really well, and suddenly, I had a career as a filmmaker, and now everyone knows me as Waititi."

According to Wired, Waititi spent his 30s making small, but wildly popular films, including Boy (2010) and Hunt for the Wilderpeople (2016).

Both are top-grossing films in New Zealand, mostly featuring Māori characters and actors and set in poor, rural areas similar to where Waititi was raised.

When Hunt for the Wilderpeople premiered at the 2016 Sundance Film Festival, it received such great reception that Waititi was asked to direct Thor: Ragnarok - a film that reinvigorated the Marvel franchise through Waititi's humour and soundtrack.

Following the superhero blockbuster, Waititi wrote, directed, and starred in Jojo Rabbit, a World War II satire about a lonely boy in Nazi Germany who has Adolf Hitler, played by Waititi, as his imaginary friend.

"What better way to insult Hitler than having him portrayed by a Polynesian Jew?" Waititi wrote on Instagram.

He didn't research the role at all.

"I didn’t base him on anything I’d seen about Hitler before. I just made him a version of myself that happened to have a bad haircut and a shitty little moustache. And a mediocre German accent," Waititi told Deadline.

“It would just be too weird to play the actual Hitler, and I don’t think people would enjoy the character as much. Because he was such a f***ing c***, and everyone knows that as well."

The film was nominated for various Oscars and Waititi won for Best Adapted Screenplay.

Now, following the Thor films, Waititi is set to direct a new Star Wars film set for 2025 and write and direct a film based on Flash Gordon for 20th Century Studios, among other things.

"It’s just better than anything," he told Esquire of being a dad.

"You have these little things, these little creatures, who just want to hang out with you and play. They want to give you cuddles and to be your friend.

"In New Zealand, our bullsh*t meters are very sensitive, and so, coming to America, you’re like, I don’t trust anyone. So to have these two people who are just genuine, who when they try to trick you, it’s just to get ice cream - you know? That’s it."

Both children appear in Thor: Love and Thunder.

"It's just cheap labour," he joked on The Project this week.

Reply
Upvote
1 upvotes
I love his film Boy, which is a charming and wistful little comedy, drenched in pathos.
Sidebar: I actually borrowed it from CIVIC video while staying in a small NZ town and drove 100kms away before remembering it was stashed in the glove box. After paying for its replacement, I'm now the proud owner of a well-travelled DVD copy of Boy. So, no, before you start, I'm not responsible for Civic's downfall.
I didn't realise quite how autobiographical it was, down to the appearance of his father, played by Taika himself, who exactly captures the look of his Dad from these photos.