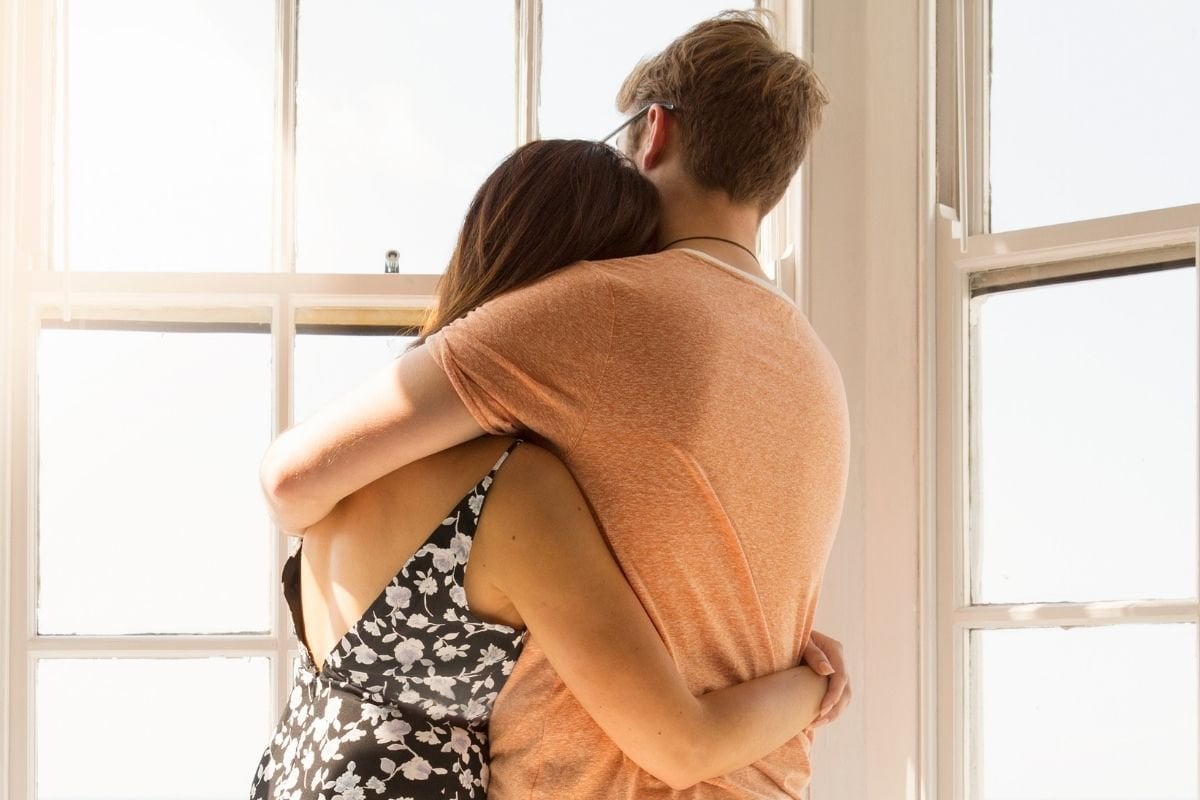 Early on in their relationship, Taylor's* husband would often go and visit a good friend of his.

Taylor never met this person, despite how much time the two mates spent together.

But now when Taylor asks Andrew* about that friend from years ago, he can't tell her whether that person was real or not.

Andrew has schizophrenia. It means that sometimes the things he is thinking or experiencing aren't actually real or true.

As Taylor, 32, told Mamamia's news podcast The Quicky this World Schizophrenia Day (May 24th), there were times when he'd descend into a paranoia thinking that the government was trying to kill him. Or that there were bugs under his skin.

Listen to Taylor's interview below. Post continues after audio.

"When they're at their worst it's quite frightening, but not in the way that you read about in the media or see in the movies," Taylor told host Claire Murphy.

"There is this stigma that someone with schizophrenia is a danger - you know burning down houses, or hearing voices that tell them to hurt people. I am not sure about other people, but that's most definitely not the case with us, in fact, it's very much the opposite."

As Taylor explained, she has only ever been scared for Andrew, not herself.

"It's frightening in terms of trying to keep them safe. There were times when we'd have to call the CAT team, which is the crisis assessment team, because you just don't know what to do when they're having a psychotic breakdown. If they're bigger than you, you can't restrain them, and there's just nothing you can do to rationalise or to protect them."

It took five years for Andrew to get the right diagnosis, with medical experts first telling the couple he had depression and social anxiety, then bipolar and finally when he was 27 years old - schizophrenia.

Schizophrenia is a complex brain disorder which affects between 150,000 - 200,000 Australians. Research suggests a combination of physical, genetic, psychological and environmental factors can make a person more likely to develop the condition, but a definitive 'cause' is unknown. Some people may be prone to schizophrenia, and a stressful, emotional or traumatic life event or harmful alcohol or drug use might trigger a psychotic episode.

Symptoms can include hallucinations, delusions, social withdrawal, a lack of motivation, 'blunted' emotions, impaired thinking and memory and lack of insight.

As Dr Matthew Cullen, one of Australia's leading psychiatrists and the CEO of Chemist2U, told The Quicky, "we've done a good job as a society at starting to address the stigma around less severe mental illnesses like depression and anxiety, but when it comes to the much more severe illnesses likes schizophrenia, I think for so many people it's just a concept as an illness that's very hard to relate to. It's hard to relate to someone having paranoid delusions, or talking to themselves."

As Taylor explained, the reason she's decided to remain anonymous in both the podcast and in this article, is because of the stigma they experienced, particularly from his family, when Andrew was given his diagnosis.

"The media and the way it's portrayed in the media has a lot to answer for. When the diagnosis came through, my boss asked if I was safe. Obviously that was asked with good intentions, but I can't even express how that was not even a factor in our personal circumstance. There was never at any point any danger of me needing to be frightened for my own wellbeing."

Once Andrew was on the right medication, Taylor says the impact was "literally life changing."

He went from not being able to hold down a job, to flourishing in his career. He went from someone who at times found it difficult sleeping, eating, going outside and socialising, to someone who was able to enjoy life again.

"Now if you were to meet him you'd have no idea whatsoever. We have a normal life now," said Taylor.

Although schizophrenia tends to run in families, no single gene is thought to be responsible. This is something Taylor and Andrew talked at length about before trying for a family in 2019.

"It is something we discussed, and it is something I will be vigilant with in terms of watching for potential signs. Though we didn’t feel this was something to stop us having a family. If it is passed down somehow, I feel like we will be better equipped to cope, and who knows where treatment options will be at that point.

"At the peak of his psychosis, I never would have dreamed we would be at this point now, and that was only a few years ago. In 20 years society and treatment (hopefully), should be in a much better place to be able to support those living with the condition, and those who love them," she told Mamamia.

Anyone in need of support for schizophrenia or other complex mental health issues can access SANE Support Services online or call 1800 187 263.