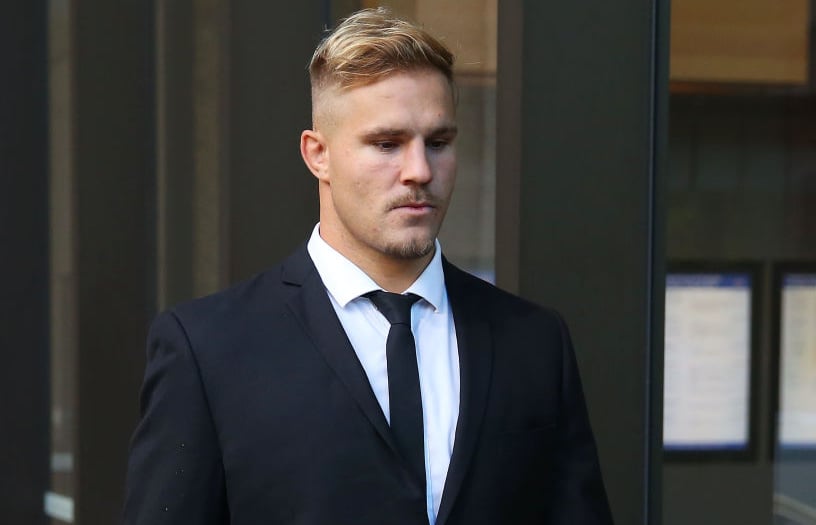 The jury in the trial of NRL footballer Jack de Belin says it's unable to reach unanimous verdicts on most of the charges before them but has been asked to continue deliberating.

De Belin, 30, and Sinclair, 24, have each pleaded not guilty to five counts alleging they sexually assaulted a woman in a North Wollongong unit in December 2018.

After a week of deliberations, the Sydney District Court jury said it didn't believe there was "any possibility" of unanimous verdicts for the first four charges against each accused.

"For the past five days, we have been through a rigorous process of examining all the evidence proffered in the trial," the jury said in a note on Monday.

A verdict has been reached on the final charge against each man, related to an allegation de Belin anally raped the then-19-year-old while Sinclair was in an adjacent room.

Judge Nicole Noman on Monday said she wouldn't take that verdict yet, requiring jurors instead to continue their deliberations on the other charges.

Notwithstanding the five days since the jury retired to considered its verdict, past experience showed juries can often agree if given enough time to consider and discuss the issues, the judge said.

Over a 13-day trial, the jury heard allegations de Belin attacked the woman in the bedroom of a North Wollongong unit after using the bathroom.

She said she told the men to stop and then "just let it happen", crying as the men "took turns".

The men both testified the sexual encounter was consensual, with the woman acting "normal" and appearing to enjoy it.

Australia's border will remain shut until at least 2022.

His third federal budget on Tuesday assumes Australia's international border will open next year, but the government admits it won't jeopardise its COVID suppression strategy in favour of restriction-free travel.

Australians are living like few others around the world and the government will do everything in its power to prevent a third wave, Prime Minister Scott Morrison said on Sunday.

"International borders will only open when it is safe to do so. We still have a long way to go and there are still many uncertainties ahead," he said on Facebook on Sunday.

"Our goal is very simple, to progressively open as quickly as we can, subject to safety," he said on Sunday.

"Green lanes, vaccinations and then the potential for those that have been vaccinated to be able to travel and return in different circumstances."

But with the vaccination rollout running at "about 350,000 doses per week", Australia's adult population won't be fully vaccinated until 2023, opposition health spokesman Mark Butler says.

"Three weeks ago Scott Morrison said there could be international travel and home quarantine by as early as July," Butler told reporters on Sunday.

"This morning ... he's saying Australia will be locked down forever."

A mass COVID-19 vaccination hub has opened in Sydney Olympic Park as the city keeps most of its coronavirus restrictions for another week.

The NSW government expects the Homebush hub, opening on Monday and the first to open in the state, will have the capacity to administer 30,000 COVID-19 jabs per week.

It will be staffed by hundreds of medical personnel and operate six days a week from 8am to 8pm in a specially fitted commercial building.

Thousands of healthcare workers have booked in for a COVID-19 jab at NSW’s mass vaccination hub as social restrictions across Sydney are extended, including mandatory masks on public transport | @AlexSmithSMH @MWhitbourn https://t.co/SZn9r3tzMk

For its first two weeks, the hub will be open to people in categories 1a and 1b before expanding to anyone over 50 from May 24.

Victoria has now streaked 25,300 vaccine doses ahead of NSW after bringing six mass vaccination hubs online across the state.

The first purpose-built mass vaccination hub located at Homebush in Sydney will officially open its doors this morning, as COVID-19 restrictions across Sydney will stay in place for a further seven days. #9Today pic.twitter.com/9X1syCqUhy

The hub opening comes fresh from the NSW government extending Greater Sydney's current restrictions for another week, except for mask usage in retail settings.

NSW Health on Sunday said it remains unsure how an infected east Sydney man caught the virus, which shared the same genomic sequencing as a returned traveller from the US in quarantine.

The man, in his 50s, subsequently infected his wife but no other close contacts to date.

Premier Gladys Berejiklian said she was "keen to prevent a super-spreading event" given the "missing link" between the two local cases was yet to be identified.

It means for the next week household gatherings remain capped at 20 people, mask usage remains mandatory on public transport and indoor venues such as theatres and aged care homes, and singing and dancing remains mostly banned.

Hospitality patrons are still not permitted to drink while standing, although retail customers are no longer obliged to wear masks.

NSW recorded zero new locally acquired COVID-19 cases in the 24 hours to 8pm on Saturday from more than 18,000 tests.

There were an additional six cases in returned travellers in hotel quarantine.

The charges ranged from breaching AVOs to assault occasioning actual bodily harm, choking, stalking and perverting the course of justice.

The charges were brought against 11 male and five female officers; one constable, 12 senior constables and three sergeants. It is unknown if any have since been convicted.

Experts believe the true extent of domestic violence within the police could be much higher given the difficulty for victims to report.

"We have many women contact us seeking help because their partner or ex-partner is violent and a serving police officer," Kerrie Thompson, chief executive of the NSW Victims of Crime Assistance League (VOCAL) told ABC.

"So... only 16 officers charged in one year seems very low. On the other hand, it is our experience that police are often not charged with domestic violence and... there is a reluctance to put protection in place for the victim."

Unlike other Australian police forces, NSW Police does not have a specific, consistent policy for dealing with violence allegations against its members.

In NSW, police only refer domestic violence investigations involving officers to other stations or area commands on a "case-by-case basis", meaning it is not unheard of for an alleged perpetrator's station colleagues to investigate.

This week's federal budget will include a $353.9 million health package for women spread over four years.

The package includes funding for cervical and breast cancer, endometriosis and reproductive health.

Health and Aged Care Minister Greg Hunt said the government was committed to improving health services around Australia for all women and girls, including Aboriginal and Torres Strait Islander people.

While largely that has been speculated in the media, it is still seen as inadequate after years of neglect in the sector.

"The findings of the royal commission were damning," RACP spokesman John Maddison says.

"They mandate a more significant commitment from government that makes delivering all their recommendations possible – not a temporary boost that kicks the can down the road."

The Health Services Union will hold an aged care rally outside Parliament House on Monday.

But Mr Frydenberg says the package will include reforms to home care and residential care, and governance, as well as skills and training initiatives.

A man has fatally shot six adults, before shooting himself, at a birthday party in the United States.

The shooter opened fire at the party in Colorado Springs, Colorado, early on Sunday, officials say.

"The suspect, a boyfriend of one of the female victims, drove to the residence, walked inside and began shooting people," a police statement said.

Seven people are dead after a shooting at a birthday party where friends, family and children gathered to celebrate early Sunday morning. https://t.co/ui17NSihhz

The motive has not yet been identified.

Children at the scene appear to have been spared and were placed with relatives, a statement released by police and city officials said.

- The situation in Jerusalem's Old City came to a dangerous head over the weekend, with medics saying about 300 Palestinians have been injured in violent clashes with Israeli security forces since Friday.

- Hundreds of athletes have taken part in a test event at the Olympic Stadium, as organisers fine-tuned operations and COVID-19 countermeasures with under three months to go before the Tokyo Games.

- Two women and a four-year-old girl have been injured in a shooting incident in New York City's Times Square. The victims were bystanders and got caught in an argument between two to four men, with at least one of them carrying a gun.