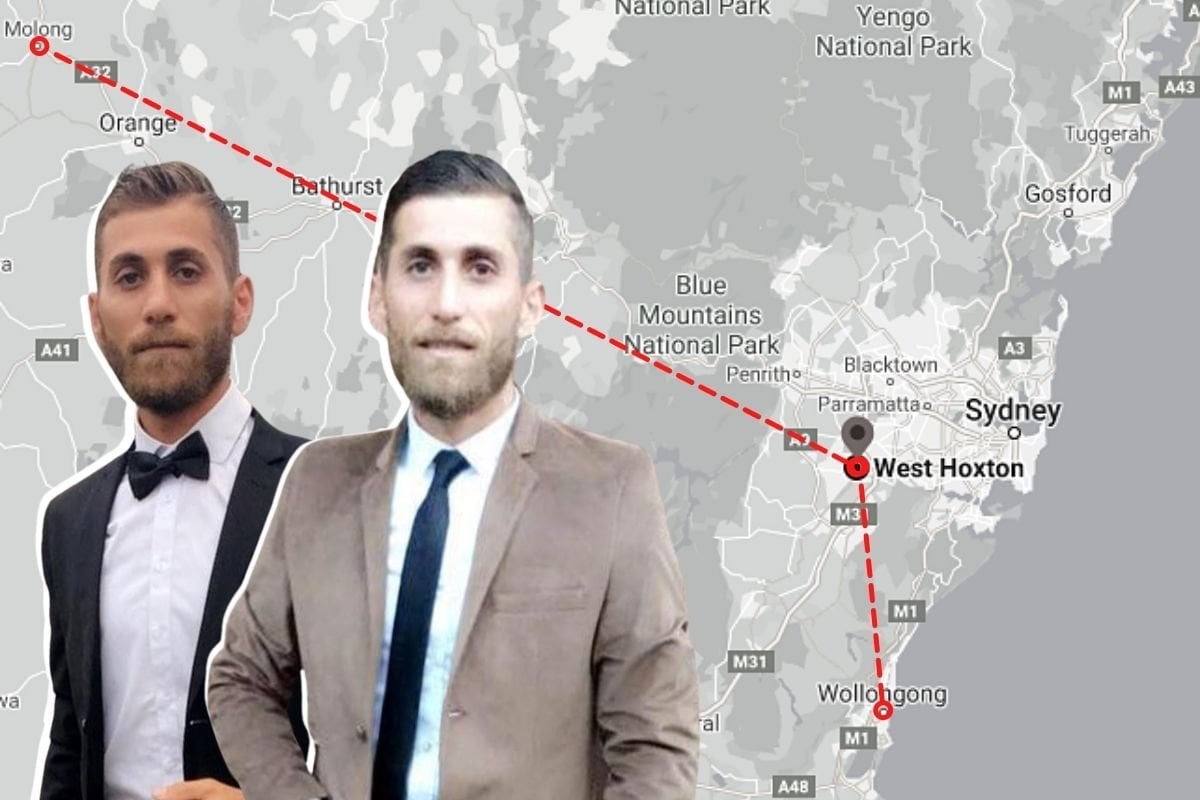 On Thursday evening they drove 83km to Wollongong and back. Upon their return, they were tested for COVID-19, which is required of them as essential workers based out of West Hoxton.

On Friday morning, they got up at 4am and headed 273km west to Molong, stopping on the way in South Bowenfels and Orange.

At 9:36am one of the men, Roni Shawka, received a call from NSW Health while the group was already in Orange.

As an Iraqi immigrant, English is not the 27-year-old's first language. When he received the message, he passed on the number of his employer who was told that Roni needed to isolate in the cabin of the removal truck immediately as he had tested positive to COVID-19. But it is alleged the men continued into Molong – 30 minutes away – to finish the delivery.

During this time, Ramsin Shawka, Roni's twin and their colleague Maryo Shanki, were also confirmed as being COVID positive. The fourth member of their party tested negative.

Both the Shawka twins and Shanki were charged with failing to comply with the public health orders, and escorted home by NSW Police.

Speaking to the Daily Telegraph on Monday morning, Roni said, "Of course I feel very bad, I feel very bad for what I [have] done, but it’s not my fault… I was driving and he call[ed] me from the health [department], he told me to stop working and go home, I was already in Orange.

"I gave them the number of my boss, I told them my language is not very good.

These men have been chastised by the NSW government, and much of the state, for their "thoughtless act."

“We know that the delta variant is highly transmissible, and it is unfathomable to think that, with all the public information and health warnings, people could so blatantly ignore the health orders," said Police Minister David Elliot.

But let's give these men the benefit of the doubt for a second. They weren't NRL players gathered for a party. They weren't politicians with entire teams working under them conveniently 'forgetting' about the rules.

These were essential workers, in the middle of performing a job deemed 'a reasonable excuse to leave home', even for residents of the Greater Sydney region who are currently under stay at home orders.

It's true that they might've feigned ignorance in order to complete a job they were already 236km into completing. Perhaps they were worried their paycheck would disappear during a time where people in unsecure work have the least financial protection. Perhaps they did just misunderstand the instructions from their boss and NSW Health thanks to a language barrier.

Minister Elliot seems to think that every person in NSW has the privilege to sit down and watch the 11am press conference every day. Or scour the NSW government website for the constantly changing rules.

There is every chance that these men didn't 'blatantly' ignore the health rules. They were just confused by them, like most of us are.

The men's boss told the Daily Telegraph, "the premier said do the test and go back to your daily life if you have no symptoms. I told them to get that test, they would not have done it otherwise.

"We just followed the instruction, we have not done anything wrong by the public … [but] whatever a court decides we will accept."

Our outrage at these removalists, before we ever knew the full story, is symptomatic of a growing fury in Australia right now.

12 million of us are in lockdown thanks in part to a bungled vaccine rollout that's left our country vulnerable to the highly contagious delta variant.

We're watching celebrities, like Katie Hopkins and Caitlin Jenner, be allowed to fly in while those with Australian passports are kept out.

Australia is so broken.

What a country - red carpet for this woman, threat of jail for citizens, (who care desperately about keeping their loved ones safe and are only asking for a viable pathway home).#strandedAussues #FortressAustraliahttps://t.co/BDD7hA0cbP

Victorians are angry that the virus made its way into their state from Sydney thanks to lax rules. That was due to removalists too - a group of men who actively refused to cooperate with police. It's easy to lump those removalists in with this new group.

Sydneysiders are angry that Gladys didn't lock us down harder when she could have, and potentially avoided our current reality of a minimum of five weeks inside our homes, with the potential for more.

And it goes on and on and on.

But amid all the mess let's remember who we're angry at.

We're angry at our leaders, a bungled rollout and confusing public health orders. Not the innocent people who contract COVID-19 as a result of an incompetent system.

Reply
Upvote
Thanks Gemma for writing this. Am sure many of us feel really sorry for them and their family in these confusing times without an English barrier. Really good to see a much more contextual piece as opposed to the general reporting which implies they did the whole trip after being informed - feel awful for them losing their mother and photos of them isolated to their car afterwards splashed everywhere.

Reply
Upvote
3 upvotes
Great story....Though don't you think it is unfair to plaster their names all over the internet? I get that this would have been released roughly the same time their mother passed and perhaps you didn't know of this when publishing. But hasn't this family endured enough? Don't you think their names should be removed? You had a man spreading Covid19 in the northern beaches who licked the club floor the same night he unknowingly spread it in the community. They did their best to hide his identity. The limousine driver that first contracted the virus - no face or name.....
You've mentioned a lack of understanding and language barrier. English is most likely to be their 3rd or even 4th language....
These people are not public figures or celebrities wanting to be in the spotlight. Why don't we let them mourn their mother in peace and deal with the chaos ahead of them?
All they will see are their names and faces rather than the message behind the article.
The intent is wonderful, I just don't think it would be understood or is fair.
News
General
Opinion
True Crime
Politics
Sport
Explainer
Entertainment
Celebrity
Reality TV
Movies
TV
Books
Rogue
Royal
Lifestyle
Beauty
Fashion
Weddings
Home
Wellness
Health
Fitness
Travel
Food
Parents
Before The Bump
Pregnancy
Baby
Kids
Teens
School
Parent Opinion
Work & Money
Money
Finance
Career
Lady Startup
Relationships
Sex
Dating
Separation
Friendship
Family
Real Life
Couples