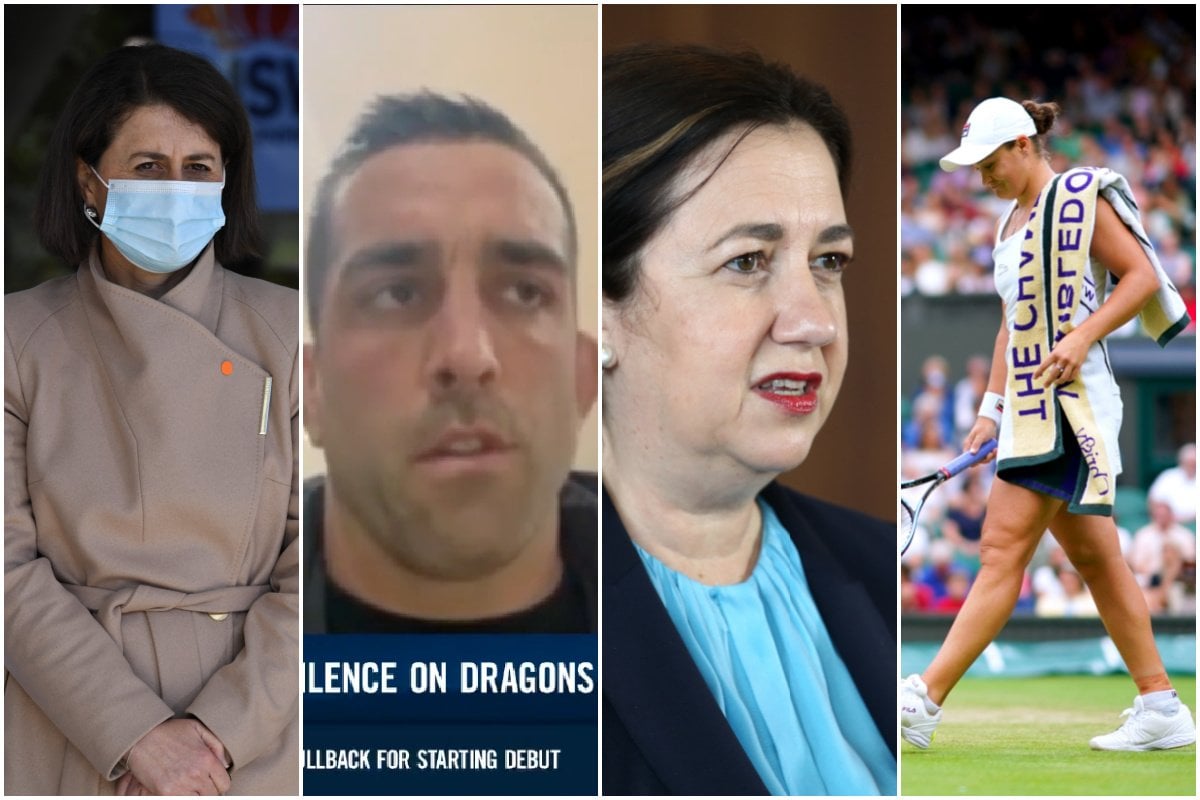 NSW expected to extend lockdown by a week.

The NSW government is expected to confirm a coronavirus lockdown imposed on millions of people in five regions will be extended by a week, as the state continues to record more than a dozen new cases each day.

Premier Gladys Berejiklian spent most of Tuesday locked in discussions with health experts to gather information on "what next week looks like", ahead of a crisis cabinet meeting.

It's believed the government decided to extend the lockdown on Greater Sydney, Wollongong, Shellharbour, Blue Mountains and the Central Coast, due to end on Friday, by another week to 11.59 on July 16.

NSW COVID-19 lockdown set to be extended by a week, ABC understands https://t.co/1dnvC1WEmL

With the new school term due to begin next week, students in those five regions are likely to be mostly learning from home. The children of essential workers will be able to attend schools, as has happened in earlier lockdowns.

Students outside those regions should be able to go back to school.

NSW recorded 18 new COVID-19 cases in the 24 hours to 8pm on Monday, bringing the total number of people infected in the latest outbreak that began on June 16 to 330.

On Tuesday, Ms Berejiklian said extending the lockdown would be informed by the fact the government wants this to be the last.

The goal is to ensure a high proportion of the population gets vaccinated in future weeks and months.

The lockdown issue will be discussed at the premier's regular 11am update on Wednesday.

The Sydney Morning Herald has revealed that NSW Health allowed about 160 year 12 students at Sydney's St Joseph's College to get the Pfizer vaccine, even though the program is only currently available to over 40s.

The students at the high-fee independent school were bussed to a vaccination centre at the end of last term for their first shot and are due to have their second when school goes back.

The principal told the Herald, the school asked for the allowance for students given many were boarders from remote, regional and Indigenous communities.

In a statement, NSW Health said it gave the jabs in error - agreeing to the vaccination of Aboriginal students boarding at the school, not a wider group of boarders.

"We have an education system in Australia that is defined by haves and have nots. I get that this school has a cohort of boarders, but there are kids like that all over the country. And the kids that are most affected by COVID... are the kids that have the least. They're not the kids at St Joeys."

Australian couple among 32 killed in US condo collapse.

The death toll from a partially collapsed Miami-area condominium has risen by four to 32, officials say, as rescue workers brace for a tropical storm and relatives of a deceased family of four prepare for the disaster's first funeral.

A total of 113 people remain missing 12 days after roughly half of the 12-storey Champlain Towers South building came tumbling down early in the morning on June 24.

Australian couple Tzvi and Ingrid Ainsworth have been confirmed among the fatalities. They were members of the Chabad of the North Shore in Sydney prior to moving to the US, and had seven children.

The bodies of Tzvi, 68, (far left) and Ingrid Ainsworth, 66, (far right) formerly of #Melbourne, have been found in the partially collapsed #Miami apartment building https://t.co/4HZxiJnXM3 pic.twitter.com/tqvk6M5ygH

Their bodies were found on Monday.

Miami-Dade County Fire Chief Alan Cominsky said more than 200 firefighters were sifting through the rubble. He said 124 tonnes of debris had been removed so far.

Investigators have not determined what caused the 40-year-old complex to collapse.

St George Illawarra have been forced to admit failings in club culture after Paul Vaughan was sacked on Tuesday for hosting an illegal party at his home with 12 other players at the weekend.

In an emergency meeting on Tuesday, the Dragons board decided to tear up the remaining 15 months of Vaughan's NRL deal which was worth around $750,000 per season.

Vaughan had already been fined $50,000 by the NRL and slapped with an eight-game ban for breaching COVID-19 protocols by hosting a party at his Shellharbour home.

Jack de Belin and other players have copped individual breach notices from the Dragons on top of the one-game suspensions and the $305,000 worth of fines handed out to the group.

All 13 players as well as Vaughan's partner were fined $1000 by NSW Police for breaching a health order.

It has since emerged that de Belin and a handful of others misled authorities, the club and the NRL's integrity unit to cover up that he had been in attendance.

De Belin told the club that he had been walking his dog in the general area of the party and just dropped something off at Vaughan's house.

"I don't think we've got a culture problem but I don't think the culture is where we want it to be," Dragons chief executive Ryan Webb said on Tuesday.

It is Vaughan's second breach of the NRL's biosecurity rules after he attended a cafe while in the NRL bubble last season, and he was on his third warning for another unrelated incident.

Speaking on Fox Sports' NRL 360 on Tuesday night, Vaughan gave an emotional apology to the community, the NRL and his family, saying he realised early on the significance of his actions.

"I understand the community and the angst this has caused them. I never wanted that to happen. I can't say sorry enough," he said.

Close to 60,000 people have signed a petition to deny QLD Premier Annastacia Palaszczuk an exemption to leave Australia and attend the Tokyo Olympics.

The Change.org petition, which was started by stranded Aussies, cites a quote from Queensland Deputy Premier Steven Miles who recently said: "Every month, about 40,000 Australian citizens and about 6,000 permanent visa holders are allowed to leave the country. Many of them seek to return … rejoining the queue, going back through hotel quarantine, putting our community at risk. It turns out the only thing that's required to get a permit from the federal government to leave the country is proof you have a meeting in another country. It's not good enough."

Ms Palaszczuk has indicted that she plans to take a space in hotel quarantine on her return.

Annastacia Palaszczuk’s planned trip to the Tokyo Olympics is under fire from thousands of signatories to a petition calling for the Premier to be denied an exemption to leave Australia. https://t.co/Zyxt4otHxt

During a press conference on Tuesday, she brushed aside the criticism saying, "This is a once in a lifetime opportunity to have the 2032 Olympics here in Queensland. We are never going to get that opportunity again and I would hate to see it fall at the final hurdle."

But those who've signed the petition have expressed their anger that, once again, it's one rule for them and one rule for politicians.

Victoria is aiming for its first full week of no COVID-19 community transmission since its fourth lockdown, as the state awaits a decision on eased restrictions.

An announcement on the state's next step toward "COVID-normal" rules is expected on Wednesday.

Victorians have been living under the same set of restrictions for the past fortnight, including mandatory indoor masks and a 75 per cent office workplace cap.

Business groups have been lobbying for both measures to be scraped, encouraging more Melbourne workers to return to the CBD.

Premier Daniel Andrews would not be drawn on whether face masks would still be required beyond 11.59pm on Thursday.

Larger crowds at sports stadiums and theatres are also on the cards after planned capacity increases were delayed last week due to unfolding outbreaks across the country.

Potential home buyers and their lenders will have to factor in bigger mortgage payments, even though official rates are unlikely to rise until 2024.

The Reserve Bank board has made it clear that any decision to pull the rate trigger will be dictated by progress on wages and inflation, which are still depressed.

The official cash rate remained on hold at 0.1 per cent after the monthly board meeting on Tuesday, and the banking industry will continue to get cheap funding from the RBA's slightly tweaked bond-buying program.

"It is unlikely that the cash rate will be increased before 2024," governor Philip Lowe said.

But the tide has already turned for two to three-year fixed rate mortgages, market pundits say.

Rate City's Sally Tindall said there are still some rates under 2 per cent, but not for long.

"In a matter of months, they could be extinct," she said.

The average mortgage holder with a $500,000 loan fixed for two years at 1.94 per cent, could see that rate almost double when it expires, which would increase monthly repayments by close to $400.

Ash Barty says she's living a dream after winning Wimbledon's battle of Australia on Centre Court against her friend Ajla Tomljanovic that's seen her career into the semi-finals for the first time.

The pair's quarter-final ended up being as predictable as its billing on Tuesday with the world's finest woman player proving far too accomplished for the No.75 as she soared to a 6-1 6-3 victory in 66 one-sided minutes.

The world No.1 defeats compatriot Ajla Tomljanovic 6-1, 6-3 to reach the #Wimbledon semi-finals for the first time pic.twitter.com/qj7AATwPvl

Barty will next play the 2018 champion Angelique Kerber in the semi-final.

"It's the ultimate test," said top seed Barty, who's had two wins and two losses against the German previously.

- The World Health Organisation has recommended using arthritis drugs Actemra from Roche and Kevzara from Sanofi with corticosteroids for COVID-19 patients after data from 11,000 patients showed they cut the risk of death.

- Greek officials are looking to reimpose coronavirus curbs following a surge in cases as authorities in Bangladesh and the UK also noted a spike in infections.

- A federal judge has denied a bid by an Arizona man nicknamed the "QAnon Shaman" to be released from prison while awaiting trial on criminal charges stemming from the January 6 attack on the US Capitol.